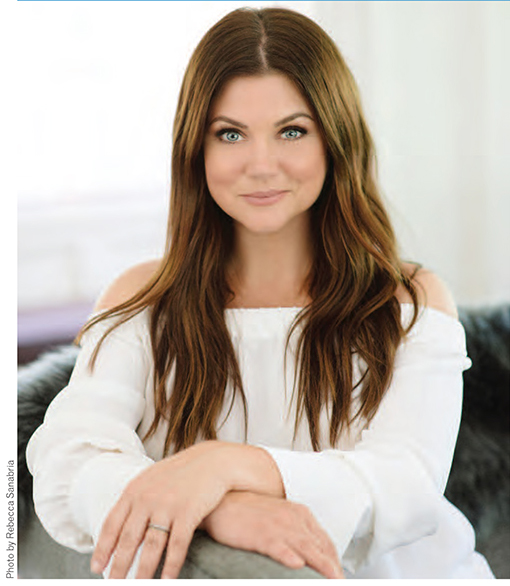 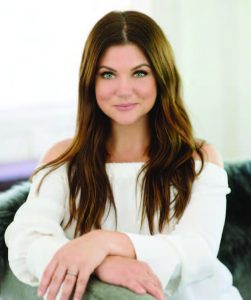 In every generation, there is a young woman—typically an entertainer—who can legitimately be called “America’s Sweetheart.” For a broad swath of current-day adults, the object of their affection and admiration back in the day was Tiffani Thiessen, aka Kelly on Saved By the Bell. Unlike most sweethearts, however, the qualities that made Thiessen so appealing have remained undiminished as they have grown deeper and increasingly complex. Through a career that has seen her play a bad girl on Beverly Hills 90210, a seductress in Hollywood Ending and an FBI consultant on White Collar, she has never lost an ounce of her humor, charm or likeability. Pairing her unique accessibility with a love for food and friends, she created her own culinary brand, including a television series (Dinner at Tiffani’s), a lifestyle website and a cookbook that hits stores this October. Gerry Strauss caught up with Tiffani over the summer, as she prepared to start on the second season of the Netflix sitcom Alexa & Katie, in which she plays the mother of a teenage daughter struggling with the dual challenges of freshman year in high school and a cancer diagnosis.

EDGE: From a young age, you’ve spent most of your life as a working, on-the-go celebrity. How did your family shape your lifestyle, your values and your love of cooking?

TT: I always say I come from good stock. My parents showed me that kindness is key and to treat people the way you want to be treated. I grew up in the kitchen with my mom, grandmother, and aunt, so you could say that I have always loved cooking. But I really started entertaining more when I bought my first house. I loved having people over and having them gather around my table. A lot of my recipes are from my own family, so there is definitely a lot of heart behind them. I am all about food bringing people together around the table, hence my new cookbook’s title, Pull Up A Chair.

EDGE: Has your own approach to proper diet changed from when you were growing up?

TT: I am definitely more aware of what goes into my body and what my body is getting nutritionally from what I am feeding it. But having kids makes you look at food differently, too. We grow a lot of our own fruits and veggies and also raise our own chickens. That, in itself, has really taught my children and me the value of good, nutritious food and how important organic food is to our bodies. I have loved cooking since I was little and the passion continued to grow as I got older. I was fortunate enough to turn it into a show and book. 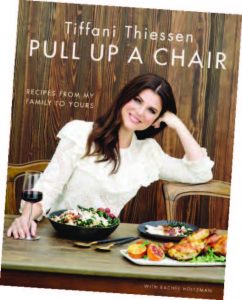 EDGE: What surprised you the most about hosting Dinner at Tiffani’s?

TT: Oh gosh, probably how many people found it fun to watch some familiar faces cook and laugh alongside me. I love to eat and drink with people I enjoy being around, which is why I created the show—and I guess others did, too. It’s funny because most of the people that came onto my show were people that I knew, and I knew well—whether it was a working relationship where we maintained a friendship over the years, or it was a new relationship that came about because I was working with them. There was one person that I actually met on the show that I became pretty close with afterwards because we were brought together by a mutual friend. He came onto the show and then I kept having him back because we clicked, and I could not have loved him more. That was a guy named Ross Anderson, who I just absolutely adored, and I felt like he was one of those people that I can’t believe we weren’t friends 20 years ago. But we’re making up for long-lost time now, you know?

EDGE: With Dinner at Tiffani’s and your social media presence and now your new book, your personal life and family have been opened up to the world like never before. Is that something that has taken some getting used to? 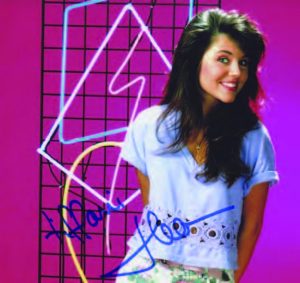 TT: I have always naturally been open with my fans to the extent that I am comfortable with sharing. With the cookbook. it just gives people more insight to my home and the stories behind all my recipes, which I am excited to share. The show only showed my kids briefly. Plus, I’ll share a little secret a lot of people don’t know about. All three seasons of my cooking show were shot on location [laughs]—I never shot in my house!

EDGE: Is there something special about seeing your name on a cookbook?

TT: Oh my goodness—it almost feels surreal! This is something I have dreamt of for a long time. It was more than three years in the making, so seeing my name on the cover is a “pinch-me” moment for sure.

EDGE: Speaking of pinch-me moments, what was your initial reaction to the opportunity to be on a new teen based sitcom like Alexa & Katie?

TT: At first I was like, They want me to play a mom to two teenagers? But I really fell in love with the story they were telling. It’s a comedy, but one that has so much heart. It’s definitely not your conventional sitcom. And I have to say, the cast and the chance to work with Netflix was another big plus. I read the script and was truly moved by what they created on the page, so I wanted to be a part of this story. Everyone can say that they have been touched by cancer in some way and I think this show does a beautiful job of showing the life of a kid who is going through that.

EDGE: Your television career began around the same age as your Alexa & Katie co-stars, Paris Berelc and Isabel May. Is there a full-circle aspect to the experience?

TT: It is so fun. It brings back a lot of memories for me personally. The girls often come to me for advice—which I have to say I love. They are both such amazing girls. They are extremely hardworking and are always eager to learn more, which reminds me of myself when I was their age.

EDGE: Looking back now, which role do you regard as the biggest game-changer?

TT: That’s a hard question because I’ve had so many shows and films. Thank God, I can say that it’s been a long career, and each role and each job has done something different for me. There was my very first big show, Saved by the Bell, and what it taught me in the sense that I was brand new in the business. I traveled, I learned all about how to be on-camera—what a multicamera sitcom was all about—and how to really schedule between having to work and having to go to school. Then, after going through that, I got older and landed on 90210, which was my first experience being on a film show and being on a show that was a little bit older, a different tone of a show. There were edgier storylines that were a little harder to swallow and to make sure that we did correctly on TV. Then there were more current shows, where I was able to be a mother and be able to have two kids during working on a show like White Collar, so it’s hard to say that I had one role that really elevated me in a different way. They really all kind of did that for me in different ways. 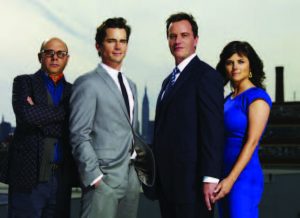 EDGE: I’d have to imagine that working on films like Woody Allen’s Hollywood Endings was memorable in its own way as well.

TT: Oh gosh, very much so. I mean, you put the name Woody Allen to it and of course it’s a different experience because you’re working with one of the greats. That whole experience for me was absolutely one of my most memorable, right from the moment I got the call to come to New York and actually meet and audition for him. They felt that I was too young for the role I’d gone out for, so they actually created a new role in the movie for me. Not only was I working with him, but it was really my first time working in New York City as a young adult and working with amazing people like Téa Leoni and George Hamilton and Debra Messing—people that I always had looked up to. That was pretty amazing in and of itself. And then to be able to go to Cannes with him for that film is something that will be in my memory box for the rest of my life. I still pinch myself that I got to experience that and to be able to have that as part of my career, you know?

EDGE: The series White Collar offered you the chance to work alongside notable actors again, including Treat Williams, Diahann Carroll and Willy Garson. Did you spend time under anyone’s learning tree during your years on that cast?

TT: I always try to learn different things from different people, but I would say Willy Garson was probably someone that I was the closest to on the show, He really was the guy that took me under his wing. He had lived in New York prior for many years doing Sex and the City and he knew that city left and right. He really showed me New York, probably better than any tour guide ever could. Being that we are both foodie people, it was like a match made in heaven.

EDGE: You’ve played so many characters throughout your career, from teen to temptress to mom and everything in between. Looking back, which role was closest to the “real Tiffani” at the time?

TT: I would definitely have to say Elizabeth Burke on White Collar, for sure. I got to play the same character for the entire series, and the writers tailored that character to me so well—from the relationship that she had with her husband, to her interests and personality—it all very much spoke to me.

Editor’s Note: Tiffani Thiessen’s new cookbook, Pull Up a Chair: Recipes from My Family to Yours, is published by Houghton Mifflin Harcourt. Its 336 pages are replete with 125 family recipes that she picked to “bring people together”—ranging from Stuffed French Toast to Short Rib Enchiladas (husband Brady’s favorite) and Curried Deviled Eggs to Boozy Date Milkshakes…and desserts including Mom’s Cream Cheese Pie. Her lifestyle website tiffanithiessen.com offers an intimate look at her family life and work. Tiffani’s sitcom, Alexa & Katie, debuted last March and was renewed by Netflix for a second season a month later.