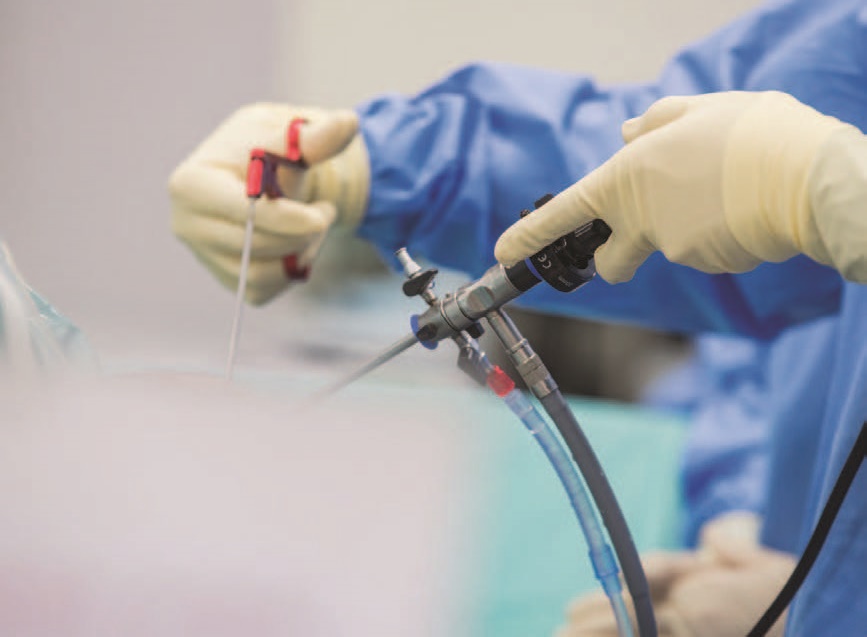 The Future at our Fingertips -

New procedures & improved outcomes are among the game-changing strides in robotic surgery.

The future ain’t what it used to be, as Yogi Berra famously said. No one has a flying car, entire meals don’t come in pill form, and teleportation’s still not an option. Robots? Well, that one we’ve got…especially in the medical profession. They may not look like the droids from Star Wars or even the Jetsons’ beloved Rosie, but new advanced robotic systems have drastically improved surgeons’ ability to deliver top-quality care in performing some of the world’s most intricate, complex procedures.

Operations that used to involve significant incisions (and unsightly scars) can now be performed through smaller, single-site entries. Patient blood loss is reduced and discomfort is often minimized—and without any compromise in favorable outcomes. What’s not to like?

Dr. Mark Preston, an Obstetrician-Gynecologist at Trinitas’ Center for Advanced Pelvic Surgery since 2016, is one of thousands of providers around the country using robotic and laparoscopic equipment in their practices. “Robotic systems like the Single-Site da Vinci system facilitate treating more complex cases in a minimally invasive fashion,” he says. “They’re especially beneficial on cases that require precise, fine dissection and laparoscopic suturing. Also, recovery times are faster versus open surgery with large incisions, and less blood is lost. For the surgeon, the procedures are less physically demanding—the ergonomics are much better, as I can sit in a comfortable position and not have to stand in one place for more than an hour at a time.” 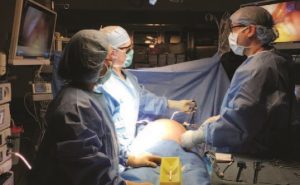 In the OB/GYN field, for example, the use of robotics has advanced how doctors treat conditions like endometriosis. The da Vinci system allows for unparalleled precision in identifying, lifting and excising lesions. In many cases, a one-time procedure with the da Vinci can clear a patient of all lesions and adhesions, saving their patient’s reproductive system. In the past, endometriosis treatments often meant a full or partial hysterectomy.

Preserving organs and saving body functions are primary goals of systems such as the da Vinci. Providers in the fields of general surgery, cardiology, and endocrinology—to name just a few—are all making use of these new, advanced systems. Dr. Sergio Baerga, Director of Robotic Surgery at Trinitas, performs various kinds of surgery using the da Vinci system, such as the double hernia operation (above). “Laparoscopic surgery was an improvement, but there were limits that we are able to overcome using robotics,” Dr. Baerga said.

For instance, in 2019, Trinitas-based ENT-Otolaryngologist Dr. Jonathan Cohen and his team performed their first radical tonsillectomy with Transoral Robotic Surgery (TORS), a minimally invasive procedure used to treat oropharynx cancers. TORS often eliminates the need for large incisions and division of the jaw bone that are sometimes required by traditional surgery. 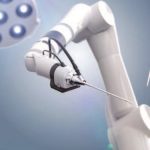 “We aim to increase the cure rate and quality of life for patients who can greatly benefit from minimally invasive surgery and targeted radiation,” Dr. Henson says. “Procedures such as the one performed by Dr. Cohen and his team reduce the space for radiation toxicity in muscles of the head and neck—that type of radiation is often required by traditional modalities of treatment.”

With trained, talented surgeons at the controls, these robots are driving modern medicine into the future. The Single-Site da Vinci system allows a surgeon seated at a console to manipulate four robotic “arms” that can be rotated a full 360 degrees. The controls maneuver a camera and direct those instrument-equipped arms in cutting, holding, cleaning and coagulating all through a single or multi-port precise abdominal incision.

The system not only allows for greater dexterity but also great visibility—up to ten times stronger magnification —than do traditional surgical procedures. And if a second surgeon is needed, there’s no need for that doctor to “scrub in;” they can simply sit down at an adjoining console and assess the surgical field. Also, adds Dr. Preston, “when there isn’t a laparoscopically skilled resident available to assist, the robot makes it easier to perform these procedures.”

But the “how” behind these medical marvels may not be as important to patients as the “why”—and just about any way you measure it, it’s easy to see why robotics-assisted procedures are becoming the preferred option across the surgical profession. Trinitas continues to keep pace with the latest innovations, bringing state-of-the-art equipment into its Operating Theaters.

“Patients need to know that we are diligently scouring the science of medicine to provide care at the forefront of our fields,” says Dr. Cohen. “Trinitas is on board with elevating the gold standard of healthcare.”