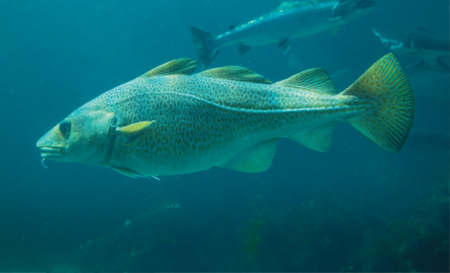 Fish skin is making a splash in the battle against wounds.

Wound healing specialists are learning to appreciate fish skin as a useful tool in their medical practices as opposed to just a delicacy served in sushi restaurants. Two years ago dried fish skin was approved by the FDA for the first time as a wound care treatment, which isn’t so strange, considering pig-intestine and fetal cow skin compounds have also been approved for medical use.

Fish skin, however, is special because it’s high in Omega3 fatty acids, which offer natural anti-inflammatory properties. Since millions of years of evolution have made fish skin resistant to bacterial colonization, it functions as a natural matrix for human skin that requires little processing. Some fish species are better suited to this technology than others. Kerecis Ltd., an Icelandic supplier that has been producing fish skin for wound treatment since the early 2010s, uses Atlantic cod exclusively. Cod has also been the fish skin of choice at the Wound Center at Trinitas Regional Medical Center in Elizabeth for patients with venous and arterial wounds.

“It’s perfect for a deep wound that’s not level with the rest of the skin, for instance, a dog bite,” says Dr. Georgios Kotzias, DPM, AACFAS, who specializes in, among other things, foot/ankle surgery, minimally invasive surgery, sports medicine, diabetic wound care, and diabetic limb salvage at the Trinitas Wound Center. “The fish skin covers the wound and fills in any missing tissue to reduce soft tissue deficit, which allows your body to heal more naturally, and evens out the scar. The graft enables drainage, allowing for faster healing. Cod skin happens to be thicker and more resilient. It holds better and for a longer period of time.”

The need for skin substitutes may arise depending on the location and depth of a wound, the likelihood of infection, and the availability of a human donor (i.e. cadaver skin). Before it can be used, says Dr. Kotzias, “the cod skin is processed and dried, then sterilized and processed without damaging the growth factors. They soak it in saline and then secure it to the wound with a special dressing and adhesive tape that is perforated to allow the wound to properly drain.”

Not surprisingly, one of the first groups to field-test fish skin was the U.S. military. Medics used fish skin for initial treatment of battlefield injuries and burns before transferring soldiers to full-service hospitals.

In the United States, more than six million people are being treated for chronic wounds at any given time. Most are diabetics or suffer from vascular disease, but the number also includes a wide range of traumatic injuries and burns, as well as unexpected complications from routine procedures. The number of chronic wound patients is likely to grow as the population ages. Individuals who fall into this category face profound uncertainty: the five-year survival rate is a tick above 50 percent, as compared with breast cancer, which has seen its survival rate climb to more than 85 percent.

The more complicated the wound, the more effective the “fish solution” maybe, as it permits the ingrowth of fibroblasts (the most common cells of human tissue) and keratinocytes (the skin cells that produce keratin), which help to bind a patient’s own skin cells around persistent, chronic wounds. The hope is that the wider use of fish skin will bring the survival rates up, as the traditional graft options do not perform well in infected areas—in part because pigs and cows are biologically close to us and therefore susceptible to similar infections. We split off from fish on the evolutionary tree a half-billion years ago, which has obviously worked out well for us in innumerable ways.

For now, the wide use of fish skin in wound healing faces an upstream battle. Insurance companies are slow to embrace (and cover) costly, new procedures, while hospitals tend to be super-cautious about changes in areas where infections are being aggressively treated. That being said, the initial goal in wound treatment is to reduce inflammation; it is the first step in turning a chronic wound into a treatable injury. If fish skin continues to prove its worth in this regard, it may become a more common tool in the medical tackle box.