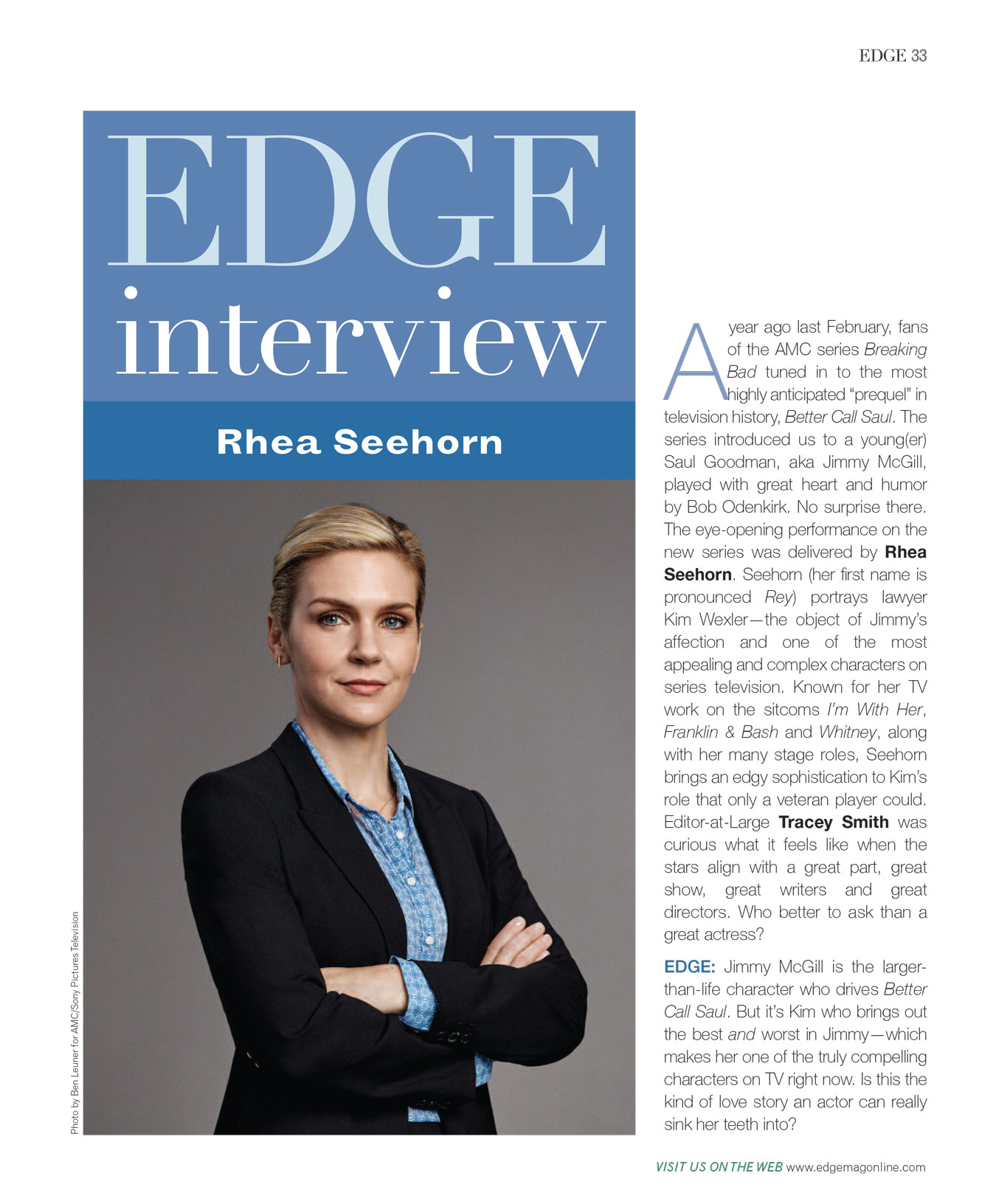 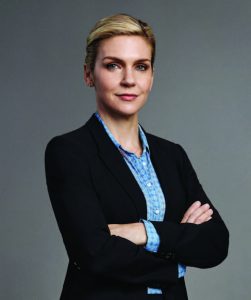 A year ago last February, fans of the AMC series Breaking Bad tuned in to the most highly anticipated “prequel” in television history, Better Call Saul. The series introduced us to a young(er) Saul Goodman, aka Jimmy McGill, played with great heart and humor by Bob Odenkirk. No surprise there. The eye-opening performance on the new series was delivered by Rhea Seehorn. Seehorn (her ﬁrst name is pronounced Rey) portrays lawyer Kim Wexler—the object of Jimmy’s affection and one of the most appealing and complex characters on series television. Known for her TV work on the sitcoms I’m With Her, Franklin & Bash and Whitney, along with her many stage roles, Seehorn brings an edgy sophistication to Kim’s role that only a veteran player could. Editor-at-Large Tracey Smith was curious what it feels like when the stars align with a great part, great show, great writers and great directors. Who better to ask than a great actress?

EDGE: Jimmy McGill is the larger-than-life character who drives Better Call Saul. But it’s Kim who brings out the best and worst in Jimmy—which makes her one of the truly compelling characters on TV right now. Is this the kind of love story an actor can really sink her teeth into?

RS: It’s a great part. Because the character Kim is independent and the relationship itself serves the story well, she is not an appendage to the lead. She is fully realized as she is. It’s a gift to get to play someone that has layers and layers that keep unpeeling, to play subtext and backstory—and to play things in the middle, where your audience goes on the ride with you instead of your character telling them what to think. It’s great.

EDGE: What are the things you look for that help you play Kim with increasing depth?

RS: On set, everything is meticulously crafted before we receive the script.  Every single thing you need is there to craft your character. The text is everything.  Every clue you need is there.  Once I’m on set, I have the pleasure of letting the rest of it be shaped by my awesome directors and scene partners. 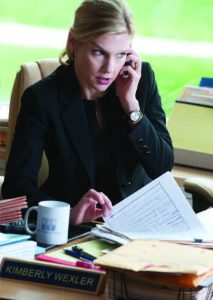 EDGE: Kim is the sane, moral center of a story that’s populated by a lot of unhinged and amoral characters. Is it a challenge having to hold it all together in your scenes?

RS: No. Kim is navigating through a world where everybody insists that things are black and white. But Kim is in the middle. [Laughs] If she saw herself that way, my guess is it would be an unbearable burden! I don’t believe Kim sees that dichotomy between her and the others.  If anything, I think the past two seasons have been a continuing exploration of all the gray areas there are in life, and how futile it can be to try to see things as only black and white.

EDGE: What’s different about playing a character in a prequel? Do you sense that things aren’t going to end well for Kim? Or will she survive and ride off into the sunset?

RS: I have the luxury of playing a character that could end up anywhere, so that distinction does not apply to me. Better Call Saul is a fresh landscape for me.  I don’t sense anything. [Laughs] I honestly don’t know! I think that the writers are smart enough to have not painted themselves into a corner. The story could go anywhere. Anything could happen. I’m not as smart as these writers and saddled with the job of ﬁguring out the best story to tell.

EDGE: So what can you be certain about where Kim is concerned?

RS: I am 100% certain of one thing only—that Vince Gilligan, Peter Gould, and our whole amazing writing staff will write what is the absolute best story they can. And the characters—mine included—will serve that story.  I have absolute trust that it is equally possible for new characters from Better Call Saul to exist or not exist during and after the Breaking Bad years, and that they will have a meaningful and provocative effect on progressing the story forward either way.

EDGE: Do you wonder—as the audience does—if a new Breaking Bad character is going to suddenly show up?

EDGE: Did you have a “Eureka Moment” as an actress?

RS: It was much more of an organic thing for me.  I never had one moment where I was sure I was going to be okay in this ﬁeld. I just worked on whatever role I could get my hands on, and strove to work with great people who would make me better with each project.

EDGE: How do your strengths as a seasoned stage actress help you in your television and ﬁlm roles?

RS: I’m very thankful for my training, history, and experience with theater. My personal grab bag of techniques and methods—which I’ve picked up from all different people, classes, plays, shows, and projects—is what I have to rely on each time I’m creating a character, preparing a scene, taking direction, doing multiple takes, and attempting to be present for my scene partner, so that each time we tell the story, it’s for the ﬁrst time. I think that, certainly, there is something to be said for doing a play eight times a week. You learn how to do the same lines over and over, know how to live and breathe them organically as though they are new each time. I ﬁnd that that helps when you’re on your ninth or tenth take. You’re remembering why you’re new to your character.

EDGE: Do you collaborate smoothly with directors?

RS: I love directors that love to direct. There is nothing better for me than a character interpretation that you come up with together with other people. I have had so many great directors. I’ve been very, very lucky—stage and on-camera work, just really wonderful directors, including the directors on my show now.

EDGE: Something we’d see on the screen?

RS: Yes, you have some freedom to single out pauses and breathing in the scene. They allow you to sit in the moment. That comes from everybody involved, Sony, AMC, Vince and Peter, as well as all of our directors. There’s an allowance to really explore scenes a lot. Our directors are wonderful. 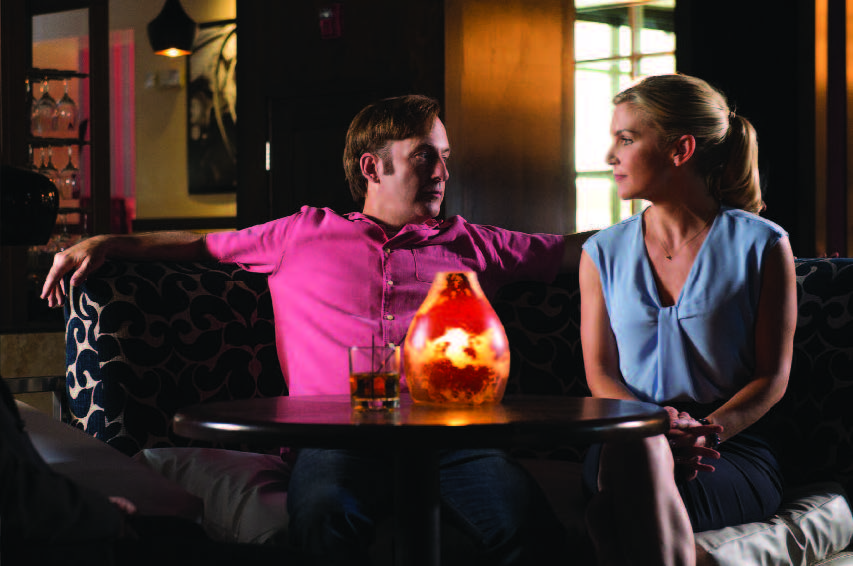 EDGE: What were some of the things you learned as an actor from your experience on the sitcom I’m With Her?

RS: It was my ﬁrst series regular part, and when the show was picked up for a full season, it was the reason I moved to L.A. from New York. There was a huge learning curve, of course. And everyone in the cast and on the crew was incredibly generous in helping me, teaching me, and answering all my questions. Being that it was a multi-cam sitcom, there were many things that were very familiar—the somewhat proscenium-style staging and the live audience, for example.

RS: He was a lovely, very helpful and supportive director. As were Ted Wass, Shelly Jensen, Arlene Sanford and all of my other directors for those 24 episodes. My cast—Teri Polo, David Sutcliffe, Danny Comden—as well as the creators Chris Henchy and Marco Pennette, and all of the writers and producers, really were the best gift I could have asked for. They were so talented and supportive. I work really hard and I don’t take any of that for granted.

EDGE: How did you land the role of Roxanne on Whitney? Had you crossed paths before with Whitney Cummings?

RS: I was asked to audition for the role and then I got picked. I didn’t know anybody on that show. You know, Whitney’s so funny and such a great woman. A lot of people think she cast a bunch of her friends on that, but she didn’t. She and Chris D’Elia knew each other, but the rest of us had never met.

EDGE: Is there a common thread to your roles—on stage, on TV, in ﬁlm…

RS: All the roles I have gotten were roles I had no idea I would get, but I was at my best. The bigger the character is, the more I’d get nervous and think, “What an amazing character. They could have anyone they want.” So I’ll get freaked out, and then I eventually get fatigued of being freaked out, and then just say to myself, “This is a little black box theater production and a three-minute character sketch…let’s just make up somebody that you would love to play…do the scene on a curb as if four people would watch…then just do your best and let go of whether or not you are the right person to tell the story.”

EDGE: Did you always have good comic timing?

RS: I don’t know [laughs]. Comedy is deﬁnitely a science. I coach actors, so I know you can study it. You can have an ear for it or not.  It’s a weird thing to try to teach if someone can’t hear it.

EDGE: Is there a better degree in comedy than being involved in a Neil Simon play on Broadway?

RS: I was not cast in 45 Seconds from Broadway. I was an understudy that got to go on…and it was thrilling. Julie Lund was cast in the role, and she was just amazing—absolutely beautiful and charming and wonderful in the role. The one and only Jerry Zaks directed. He requires that his understudies be present at all rehearsals and remain in the building, just below the stage, for all performances.

EDGE: That was during the September 11th attacks.

RS: Yes, we rehearsed up through 9/11, then we took a break. I was living in Brooklyn at the time. We actually went back to work during the time when they were telling everyone to not take the subway and to not go to public gathering areas. We premiered soon after. It was a beautiful thing to see audiences pour in because they needed to escape.  I’m so thankful for that whole experience because not only did I get to watch and listen to Julie craft and perform her wonderful role, I got to listen to and watch some of the greatest theater actors of all time on a daily basis—Louis Zorich, Lewis Stadlen, Bill Moor, Alix Korey, Dennis Creaghan, Judith Blazer, Rebecca Schull, Kevin Carroll, Lynda Gravatt, and two of my favorites, the late, and irreplaceable, Marian Seldes, and David Margulies.

EDGE: Back to Kim and Better Call Saul. You do a great job with a great character on a great series—what are some of the great things that happen as a result of that?

RS: Well, thank you for that. I’m just so grateful to continue getting to do what I love. And, really, to have the incredible fortune of working with people and material that continue to challenge you and make you better…what’s better than that?