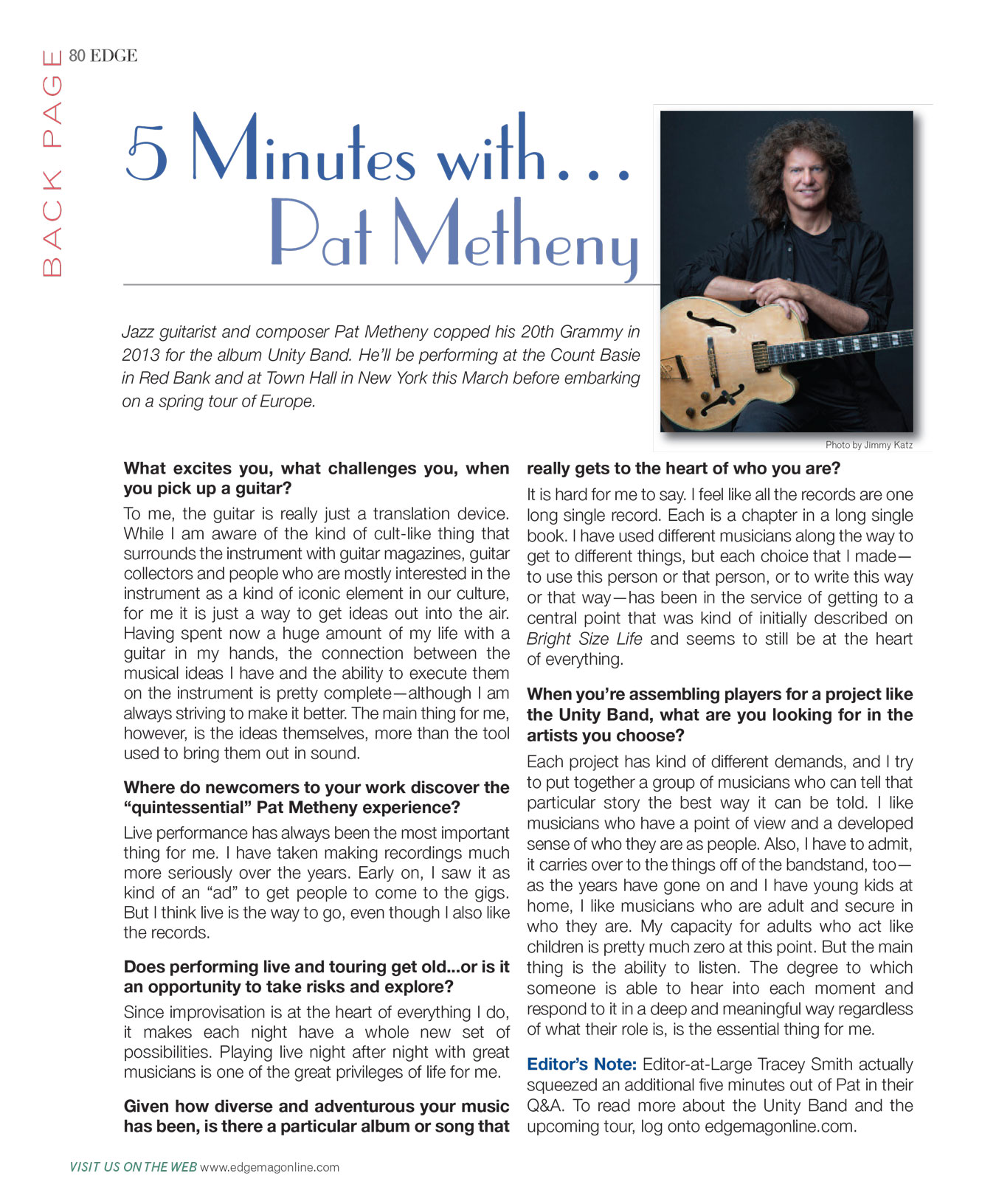 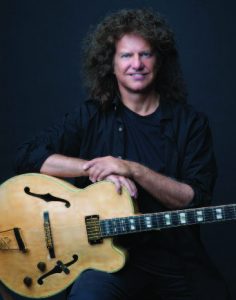 Jazz guitarist and composer Pat Metheny copped his 20th Grammy in 2013 for the album Unity Band. He’ll be performing at the Count Basie in Red Bank and at Town Hall in New York this March before embarking on a spring tour of Europe.

What excites you, what challenges you, when you pick up a guitar?

To me, the guitar is really just a translation device. While I am aware of the kind of cult-like thing that surrounds the instrument with guitar magazines, guitar collectors and people who are mostly interested in the instrument as a kind of iconic element in our culture, for me it is just a way to get ideas out into the air. Having spent now a huge amount of my life with a guitar in my hands, the connection between the musical ideas I have and the ability to execute them on the instrument is pretty complete—although I am always striving to make it better. The main thing for me, however, is the ideas themselves, more than the tool used to bring them out in sound.

Where do newcomers to your work discover the “quintessential” Pat Metheny experience?

Live performance has always been the most important thing for me. I have taken making recordings much more seriously over the years. Early on, I saw it as kind of an “ad” to get people to come to the gigs  But I think live is the way to go, even though I also like the records.

Does performing live and touring get old…or is it an opportunity to take risks and explore?

Since improvisation is at the heart of everything I do, it makes each night have a whole new set of possibilities. Playing live night after night with great musicians is one of the great privileges of life for me.

Given how diverse and adventurous your music has been, is there a particular album or song that really gets to the heart of who you are?

It is hard for me to say. I feel like all the records are one long single record. Each is a chapter in a long single book. I have used different musicians along the way to get to different things, but each choice that I made— to use this person or that person, or to write this way or that way—has been in the service of getting to a central point that was kind of initially described on Bright Size Life and seems to still be at the heart of everything.

When you’re assembling players for a project like the Unity Band, what are you looking for in the artists you choose?

Each project has kind of different demands, and I try to put together a group of musicians who can tell that particular story the best way it can be told. I like musicians who have a point of view and a developed sense of who they are as people. Also, I have to admit, it carries over to the things off of the bandstand, too— as the years have gone on and I have young kids at home, I like musicians who are adult and secure in who they are. My capacity for adults who act like children is pretty much zero at this point. But the main thing is the ability to listen. The degree to which someone is able to hear into each moment and respond to it in a deep and meaningful way regardless of what their role is, is the essential thing for me.

Editor’s Note: Editor-at-Large Tracey Smith actually squeezed an additional five minutes out of Pat in their Q&A. To read more about the Unity Band and the upcoming tour, log onto edgemagonline.com.