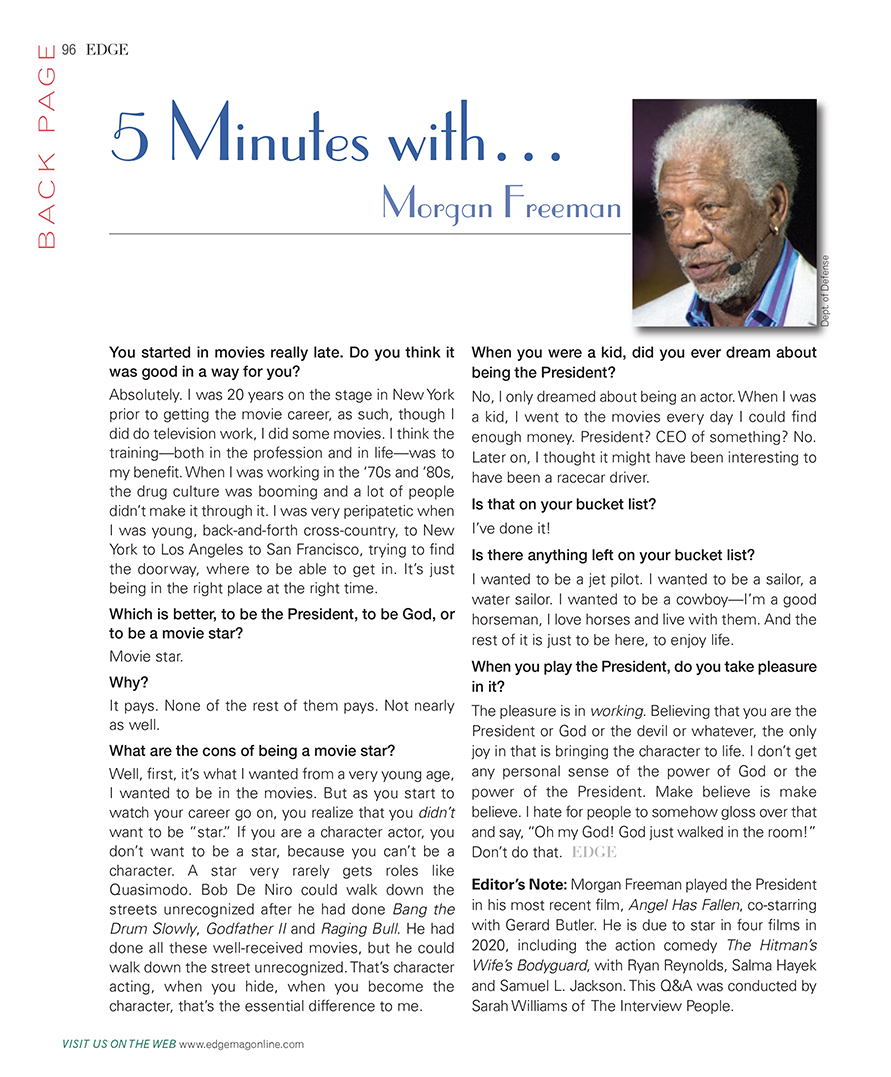 You started in movies really late. Do you think it was good in a way for you?

Absolutely. I was 20 years on the stage in New York prior to getting the movie career, as such, though I did do television work, I did some movies. I think the training—both in the profession and in life—was to my beneﬁt. When I was working in the ‘70s and ‘80s, the drug culture was booming and a lot of people didn’t make it through it. I was very peripatetic when I was young, back-and-forth cross-country, to New York to Los Angeles to San Francisco, trying to ﬁnd the doorway, where to be able to get in. It’s just being in the right place at the right time.

Which is better, to be the President, to be God, or to be a movie star?

It pays. None of the rest of them pays. Not nearly as well.

What are the cons of being a movie star?

Well, ﬁrst, it’s what I wanted from a very young age, I wanted to be in the movies. But as you start to watch your career go on, you realize that you didn’t want to be “star.” If you are a character actor, you don’t want to be a star, because you can’t be a character. A star very rarely gets roles like Quasimodo. Bob De Niro could walk down the streets unrecognized after he had done Bang the Drum Slowly, Godfather II and Raging Bull. He had done all these well-received movies, but he could walk down the street unrecognized. That’s character acting, when you hide, when you become the character, that’s the essential difference to me.

When you were a kid, did you ever dream about being the President?

No, I only dreamed about being an actor. When I was a kid, I went to the movies every day I could ﬁnd enough money. President? CEO of something? No. Later on, I thought it might have been interesting to have been a racecar driver.

When you play the President, do you take pleasure in it?

The pleasure is in working. Believing that you are the President or God or the devil or whatever, the only joy in that is bringing the character to life. I don’t get any personal sense of the power of God or the power of the President. Make believe is make believe. I hate for people to somehow gloss over that and say, “Oh my God! God just walked in the room!” Don’t do that.

Editor’s Note: Morgan Freeman played the President in his most recent ﬁlm, Angel Has Fallen, co-starring with Gerard Butler. He is due to star in four ﬁlms in 2020, including the action comedy The Hitman’s Wife’s Bodyguard, with Ryan Reynolds, Salma Hayek and Samuel L. Jackson.

This Q&A was conducted by Sarah Williams of The Interview People.