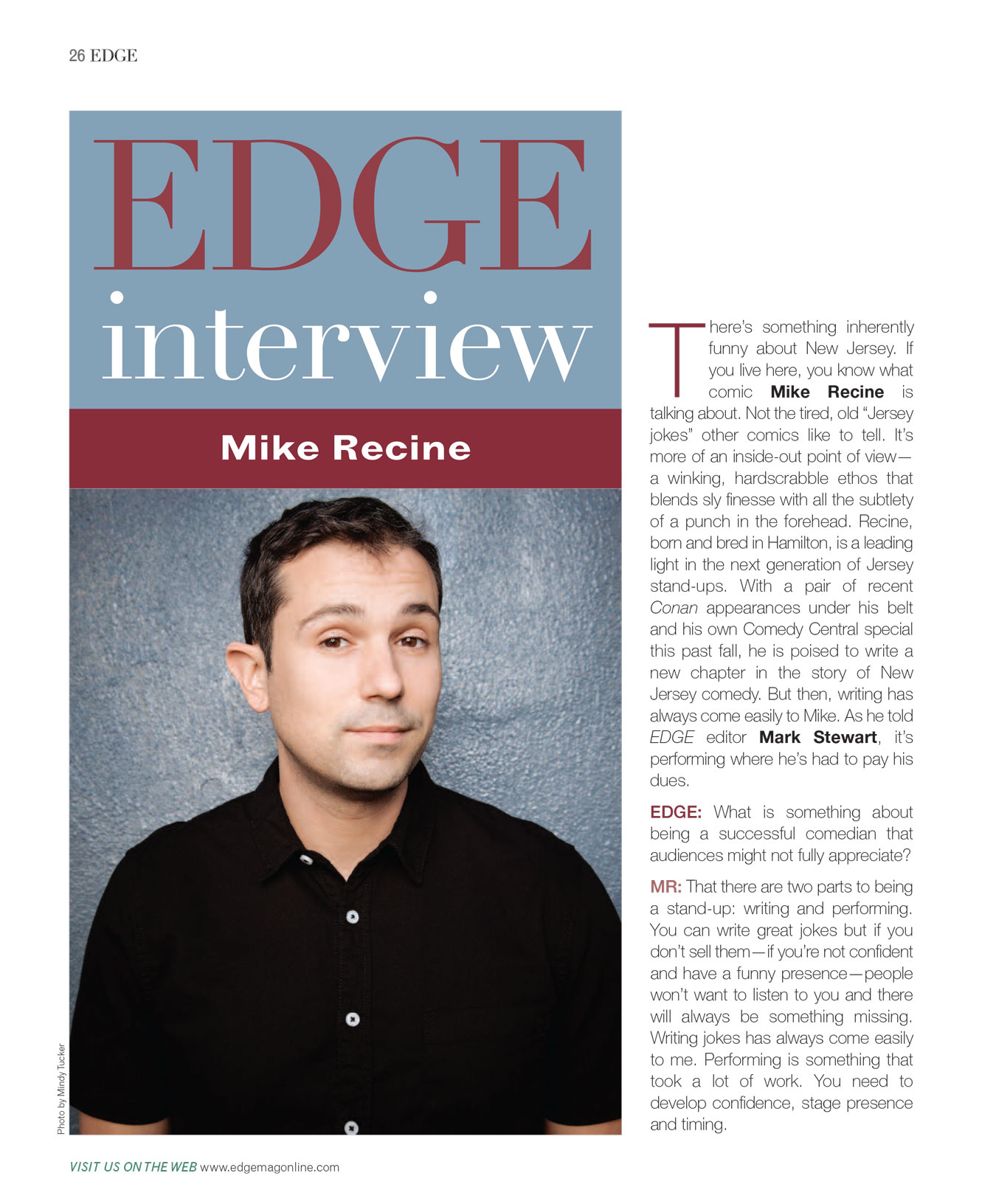 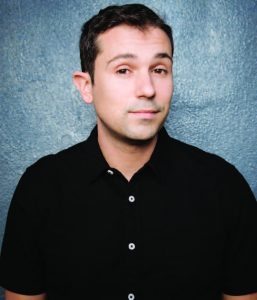 There’s something inherently funny about New Jersey. If you live here, you know what comic Mike Recine is talking about. Not the tired, old “Jersey jokes” other comics like to tell. It’s more of an inside-out point of view—a winking, hardscrabble ethos that blends sly ﬁnesse with all the subtlety of a punch in the forehead. Recine, born and bred in Hamilton, is a leading light in the next generation of Jersey stand-ups. With a pair of recent Conan appearances under his belt and his own Comedy Central special this past fall, he is poised to write a new chapter in the story of New Jersey comedy. But then, writing has always come easily to Mike. As he told EDGE editor Mark Stewart, it’s performing where he’s had to pay his dues.

EDGE: What is something about being a successful comedian that audiences might not fully appreciate?

MR: That there are two parts to being a stand-up: writing and performing. You can write great jokes but if you don’t sell them—if you’re not conﬁdent and have a funny presence—people won’t want to listen to you and there will always be something missing. Writing jokes has always come easily to me. Performing is something that took a lot of work. You need to develop conﬁdence, stage presence and timing.

EDGE: How does that evolve?

MR: There is deﬁnitely a speciﬁc rhythm you have to learn to do stand-up. You develop that by watching some of the great comics—people like Seinfeld or Louie C.K. or Woody Allen, the great joke-writers. And you watch shows like The Simpsons. The writing on The Simpsons has some of the best comedic timing. In the end, you try to be honest but you also want to make sure that your delivery is interesting and people actually want to listen to your stories. The most important thing is to meet your own standards, to write something you think is funny, jokes you care about. You want to stay relevant and have an idea of what’s going on in popular culture. A big part of being a comic is absorbing the world around you and ﬁguring out your take on it.

EDGE: Are there times when you write something you believe has great potential, but you just can’t quite get it right?

MR: Yes. For some reason it doesn’t work on stage, so I have to just let it go.

EDGE: When was your ﬁrst time doing comedy in front of an audience?

MR: I was 15 at a Panera Bread “Open Mike” night. I went with a friend from high school. I was supposed to do ﬁve minutes. I think I did about three minutes. I was nervous but it was fun. I continued doing stand-up in high school and then, as a freshman at Montclair State, I made my ﬁrst appearance at Rascals in Montclair on a New Talent night, where if you bring in a certain amount of people they’ll let you perform. No one is good at comedy at that point, but if you bring enough friends they’ll give you stage time. Then, after a couple of months, your friends get sick of you…and the two-drink minimums.

EDGE: You were in the Theater program at Montclair State.

MR: For two years. Then I decided it was time to go to the city and begin my stand-up career. My ﬁrst job was as a doorman at Carolines. I did that for three months. I was 20 and got to know a lot of comics as they went in and out—a lot of comedians who were farther along in their careers than I was. Julian McCullough—another Jersey guy who lives in LA right now—and Mike Vecchione were some of the guys who were generous with advice. The experience at Carolines helped me understand the business and get a sense of the career path of a stand-up comic. But obviously I was working the door at night. I realized that if I was going to be serious about this I had to get a day job 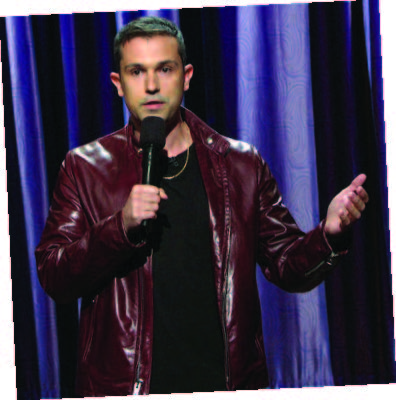 so I could be free to perform.

EDGE: What kind of work did you do?

MR: I did everything. I wore a sandwich board in Times Square. I was a mover. I worked for 1-800-GOT-JUNK. I had restaurant jobs. And I was doing some freelance writing. All those jobs, though, helped me shape my perspective and ﬁgure out what I wanted to say. A lot of times, with younger stand-ups, they try to be comics before they learn how to be people. That was me. I started in comedy before I knew who I was as a person. When anyone asks my advice I tell them “Don’t be in a rush.” Every day you learn something new about human nature.

EDGE: What, for you, was a big breakthrough moment? When did you cross a threshold in this business?

MR: The ﬁrst time I did Conan, in 2014. That was pretty cool. Every young comic is always trying to get on television. That ﬁrst time on Conan was a big deal. That was the late-night show I’d always wanted to do, the show I’d watched growing up. It elevated me to that next level. That type of appearance legitimizes you and you feel like Okay I did this…there’s evidence I was here, even if it’s the only thing I ever do. I did another appearance on Conan in 2016.

EDGE: And the next level from there?

MR: The half-hour Comedy Central special last October 7th. Once you’ve done that, it’s easier to headline on the road.

EDGE: How does having your own comedy special change things?

MR: It’s funny. From a career perspective, the more you accomplish, the more you’re chasing the next thing, whatever that is. You do have that high for a couple of days. After the ﬁrst Conan, I thought the set went really well. It was exciting going to the studio and preparing…it was a big deal. The second time you’re on TV it feels more like business as usual.

EDGE: You grew up in Hamilton. What was it about the Recine family culture that produced a comic?

MR: Both my grandfathers were very funny, but I was a quiet, introspective kid. My family members were very honest with one another, never afraid to say what they were thinking.

EDGE: Who made you smile growing up?

EDGE: So why standup?

MR: I feel like it was because it is something you do alone. You don’t have to depend on other people. I guess that ﬁt my personality. 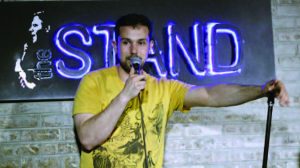 EDGE: Which stand-ups did you admire?

MR: I watched a lot of Comedy Central specials and listened to a lot of albums. Rodney Dangerﬁeld, Mitch Hedberg, Dave Attell, Greg Giraldo. I watched Colin Quinn’s show, Tough Crowd. Every stand-up will tell you that was such a great setting and such a great way to present comics being naturally funny, off-the-cuff.  Now you can see all the episodes on YouTube.

EDGE: Growing up in Jersey and now having lived in Brooklyn for a number of years, has that helped to deﬁne your style?

MR: Yeah. I’ve always been kind of an East Coast guy. I’ve always been drawn to blue-collar people and the way they are funny. There’s something about Jersey’s angry, working-class culture where they can be mean to each other but in a humorous way. It’s weird, though—I’ll be working in Manhattan or Brooklyn, where the room is full of “transplants” who’ve seen a couple of episodes of Girls and feel they know what it is to live in New York, but I can tell they lack that working-class sensibility.

EDGE: How does your act play on the road?

MR: Audiences are different wherever you go. A comic should be able to do well in every room. I’ve had good shows in Boston and Philadelphia, but also in Florida and Portland, Oregon. I did a few dive-y bar shows in Portland last year and those went really well. There’s always a way to connect with people.

EDGE: Great comics talk about what they know…and invariably they bring some aspect of their family into their act. In your case, one of your brothers is autistic.

EDGE: You tell some very funny stories that involve him in your act. Is that fair territory?

MR: I think it is. There are a lot of people who have special-needs people in their families. It’s actually fun to do that material and to connect with those people on that level. But you’re right, it’s not something you see a lot of comics talking about. It just happens to be very real to me. I think about it. I explore it. I examine it. Like my autistic brother does Special Olympics every year, and one year he got disqualiﬁed from a race. That’s a thing they do to Special Olympic athletes. Someone had to blow a whistle in his face and be like, Get out of here—you’re done! The reason he got disqualiﬁed is that he was in a walking race…and he ran. He was reprimanded for that. Does that make any sense? He didn’t ruin Christmas. Or squeeze a puppy too hard. He ﬁgured out how to win a race. With his mind.

EDGE: And the rest of your family’s fair game…

MR: Yeah, so I have another brother who’s not autistic and a friend of mine met that brother recently. He knew I had an autistic brother and he said to me, “Mike, I just met your brother and he’s barely autistic.” I think that’s a funny thing to learn about yourself: You’re not autistic but people think you are. You need to stop blinking so much…and stop wearing that propeller hat everywhere!

Editor’s Note: Mike Recine will be appearing at Catch a Rising Star in Princeton on March 31st and April 1st. He performs in New York City almost every night. You can ﬁnd his schedule at mikerecine.com.