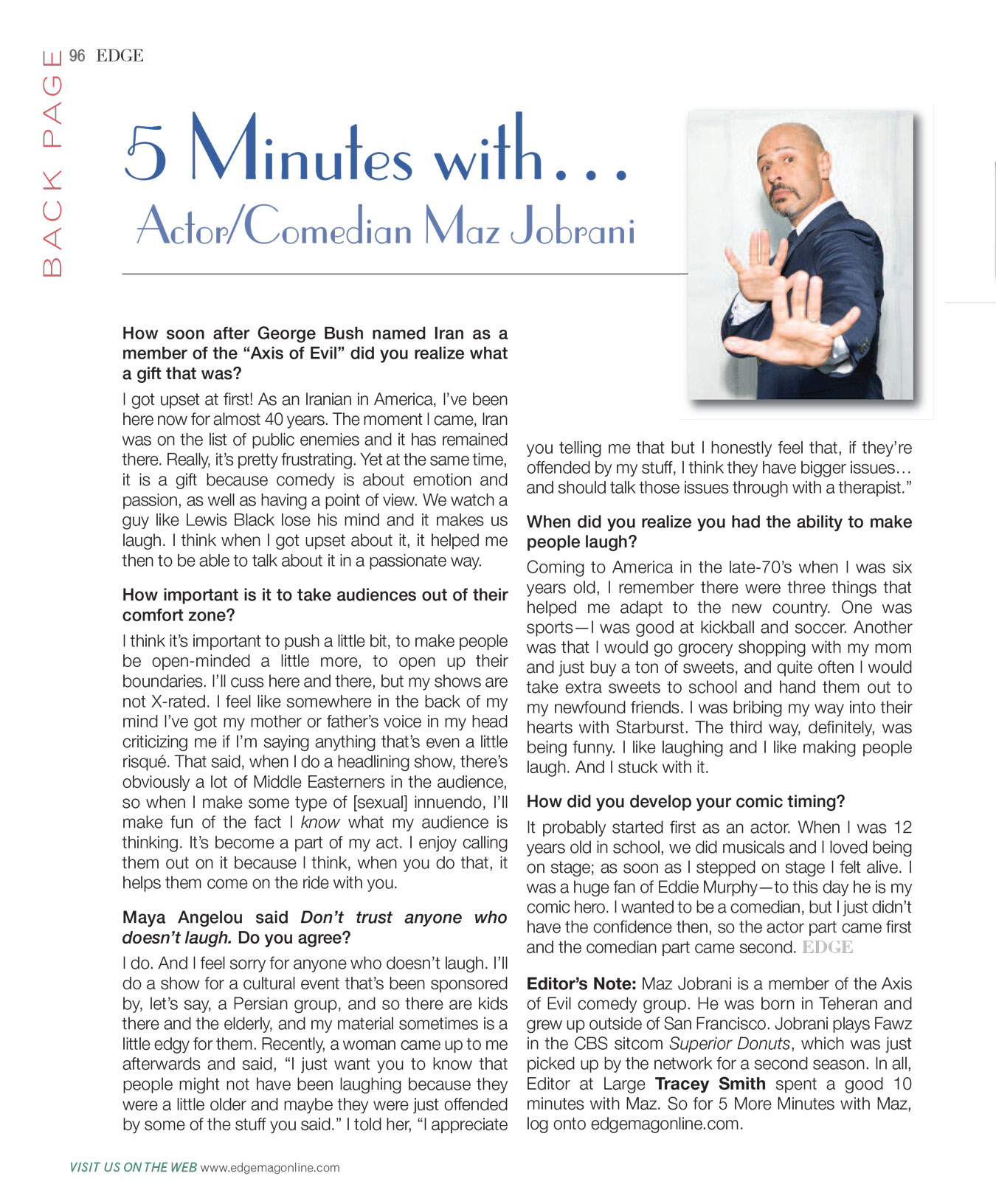 How soon after George Bush named Iran as a member of the “Axis of Evil” did you realize what a gift that was?

I got upset at ﬁrst! As an Iranian in America, I’ve been here now for almost 40 years. The moment I came, Iran was on the list of public enemies and it has remained there. Really, it’s pretty frustrating. Yet at the same time, it is a gift because comedy is about emotion and passion, as well as having a point of view. We watch a guy like Lewis Black lose his mind and it makes us laugh. I think when I got upset about it, it helped me then to be able to talk about it in a passionate way.

How important is it to take audiences out of their comfort zone?

I think it’s important to push a little bit, to make people be open-minded a little more, to open up their boundaries. I’ll cuss here and there, but my shows are not X-rated. I feel like somewhere in the back of my mind I’ve got my mother or father’s voice in my head criticizing me if I’m saying anything that’s even a little risqué. That said, when I do a headlining show, there’s obviously a lot of Middle Easterners in the audience, so when I make some type of [sexual] innuendo, I’ll make fun of the fact I know what my audience is thinking. It’s become a part of my act. I enjoy calling them out on it because I think, when you do that, it helps them come on the ride with you.

Maya Angelou said Don’t trust anyone who doesn’t laugh. Do you agree?

I do. And I feel sorry for anyone who doesn’t laugh. I’ll do a show for a cultural event that’s been sponsored by, let’s say, a Persian group, and so there are kids there and the elderly, and my material sometimes is a little edgy for them. Recently, a woman came up to me afterwards and said, “I just want you to know that people might not have been laughing because they were a little older and maybe they were just offended by some of the stuff you said.” I told her, “I appreciate you telling me that but I honestly feel that, if they’re offended by my stuff, I think they have bigger issues…and should talk those issues through with a therapist.”

When did you realize you had the ability to make people laugh?

Coming to America in the late-70’s when I was six years old, I remember there were three things that helped me adapt to the new country. One was sports—I was good at kickball and soccer. Another was that I would go grocery shopping with my mom and just buy a ton of sweets, and quite often I would take extra sweets to school and hand them out to my newfound friends. I was bribing my way into their hearts with Starburst. The third way, deﬁnitely, was being funny. I like laughing and I like making people laugh. And I stuck with it.

How did you develop your comic timing?

It probably started ﬁrst as an actor. When I was 12 years old in school, we did musicals and I loved being on stage; as soon as I stepped on stage I felt alive. I was a huge fan of Eddie Murphy—to this day he is my comic hero. I wanted to be a comedian, but I just didn’t have the conﬁdence then, so the actor part came ﬁrst and the comedian part came second. EDGE

Editor’s Note: Maz Jobrani is a member of the Axis of Evil comedy group. He was born in Teheran and grew up outside of San Francisco. Jobrani plays Fawz in the CBS sitcom Superior Donuts, which was just picked up by the network for a second season. In all, Editor at Large Tracey Smith spent a good 10 minutes with Maz. So for 5 More Minutes with Maz, log onto edgemagonline.com.