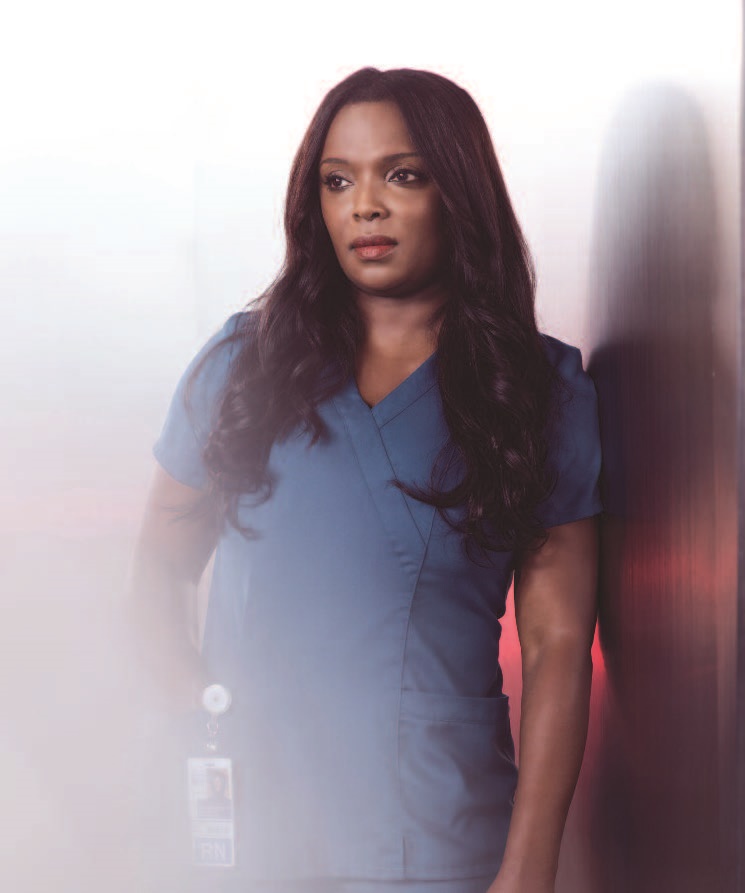 You don’t often hear it discussed, but the role of “television nurse” is among the most coveted in the entertainment business. Like real-life nursing, it offers the challenge of creating order from chaos, as well as the opportunity to leave an indelible imprint on every shift. It has supercharged the careers of many of our finest actors (Julianna Marguilies , Maura Tierney, Loretta Swit, and Edie Falco, to name a few) and given us countless unforgettable TV moments. Marlyne Barrett brings something extra-special to the role of Maggie Lockwood, Head Charge Nurse at Gaffney Medical Center in the NBC series Chicago Med. She has a real-life nursing degree, and several family members—including her mother and sister—are medical professionals. While playing a nurse is literally second nature to Barrett, she has been winning critical acclaim for her stage and screen performances for more than a decade, including an unforgettable turn as a crooked politician on The Wire. EDGE editor Mark Stewart wanted to know what it takes to balance the subtle strength and intense conflict her characters exude. As he discovered, it comes naturally. But never easily.

EDGE: I think about the characters you’ve played throughout your career and they are without exception powerful and highly competent women. Do you look for those roles as an actor, or do they find you?

MB: That’s a chicken and egg question, isn’t it? Where you are in your career often mirrors where you are with your characters. What you can play in a rich, dimensional way often determines the roles available to you. What you ask yourself as an actor is: Am I ready to do this role…and is this role ready for me?

EDGE: What are the demands of the Maggie Lockwood character on Chicago Med?

MB: Maggie plays the spirit of the E.D. She’s the one that maintains the professionalism and the humanity. The current of her presence impacts the entire atmosphere. When you initially get a role like Maggie, you’re like I can do it I can do it and you find the swagger in the character, and you’re really excited to have the swagger. Now three seasons in, Maggie is in a place where she’s asking herself about her signature in nursing.

EDGE: It’s interesting how much depth has been added to this character this season. Why now?

MB: I think Maggie is one of those characters that the writers put in their back pocket for later development. You watch these shows where they may introduce new characters in the third season to bring a fresh breath to a show. Chicago Med is a little different. What we’ve decided to do is to develop Maggie slowly, to be kind of an ace in the hole. So you sprinkle her everywhere in seasons one and two, and here we are in the third season expanding Maggie in some really interesting ways.

EDGE: I hope you take a little credit for that.

MB: Oh, definitely. And I’ve enjoyed this process. When you know you’re going to play a character for many years, you want a slow burn. Unless you’re going to do it the British way, where in one season you may have six episodes. As an actor, it’s better to have these back pocket moments with the characters you’re developing.

EDGE: Normally, an actor spends weeks shadowing the real-life version of the person they are playing. Since you had a nursing degree, did you get a reprieve from that? A note from the doctor?

MB: No [laughs] but it was helpful. The cast actually works with Dr. Andrew Dennis frequently for medical rehearsals, but we don’t see nurses that often. However, there was a nurse at Rush University Medical Center in Chicago who influenced how I play Maggie Lockwood. Her name is Gloria. I remember walking into a situation where a woman who had been hit by a semi was wheeled into the emergency room. Her body was pretty damaged. Gloria was so focused, working her environment like a symphony conductor…she had syringes, she was advising nurses what to do, she was assessing the situation, she was not overwhelmed by the urgency. The maturity in her eyes told me she knew exactly what she was doing, And the wrinkles in her face made me understand that there had been a price paid for her talent in nursing.

EDGE: Are those wrinkles familiar?

MB: I definitely recognize them in my sister, who is a doctor, a young doctor. And I recognize them in my mother, who is about to retire as a NICU nurse. The vocation anchors itself in you. It drives a depth of commitment inside you. The deeper you go into this commitment of bringing healing to people’s lives, the more it invades your life. Nursing isn’t just something my mother did. It was part of her language, part of her swagger, part of her education, part of everything. Same thing with my sister.

EDGE: Maggie can be pretty tough on the young doctors and nurses. Did you get pointers from your mother and sister?

MB: I’ve never seen my mother interact with the residents. But it is something I actually witnessed firsthand in nursing school. And I’ve seen it in my sister. Often senior nurses and doctors collaborate to ensure that young doctors become the doctors the profession should have, so being tough is a calculation made to improve and maintain the healing atmosphere you offer patients.

EDGE: If you never planned to work as a nurse, why get the degree?

MB: It was a promise I made to my parents. My father worked for Siemens as a medical engineer. And we have cousins who are doctors and nurses. So it’s a family thing. When immigrants—my family is from Haiti—come into this country, this is what they call “royal” blue-collar jobs. Doctors, nurses, engineers. There is a regal-ness to doing these professions. You can use these jobs to enter any area of society. 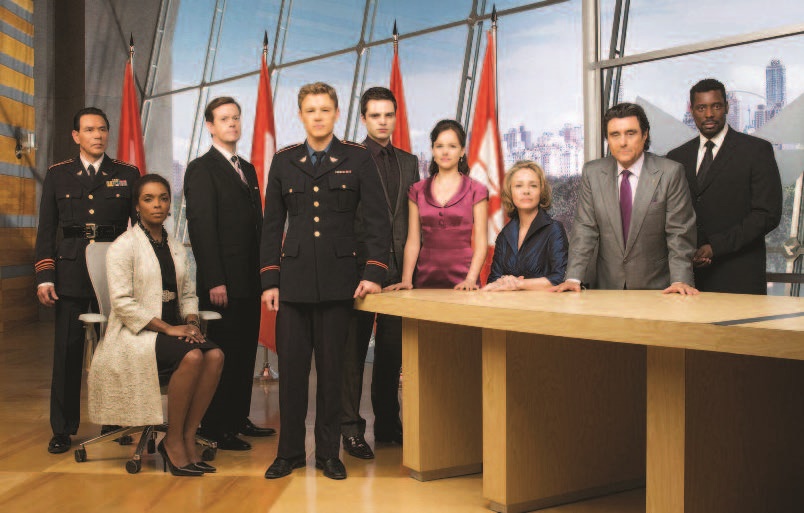 EDGE: Tell me about the friendship you built with Ian McShane (above) while you were on the NBC series Kings.

MB: Everyone, in a number of professions, across the board, says the same thing about that man: Ian McShane is an authentic, incredible human being and a phenomenal artist. Ian was involved in the resurrection of my career. There is a five-year gap in my résumé. I was the victim of an assault. I’m a person who loves to laugh. I love life. I love human beings. After I was assaulted, to say that I was distraught would be an understatement. I became introverted and depressed. I needed a lot of prayer and a lot of counseling, in addition to the physical help I received. During that time of major pain, that’s when I met my husband. I met him a month after the event. He took the time to love on me well. And it was Ian McShane who was my true north.

MB: Ian was there to help me get back on my feet. I thought I was leaving acting for good. He did not think that I was, and he said that when I was ready to come back, I should contact him. When the time came, I reached out to a lot of friends who were A-listers, people with whom I had worked. They said Yeah, I’ll help you. But I never heard from them, really. I made one call to Ian and he had representation ready to hear from me, he had a meeting set up for me, and within two weeks I was back on-air, on American Crime.

EDGE: He has a reputation for being generous as an actor, too.

MB: Yes exactly. You know, I did a scene with Ian on Kings and, after it was done, I was so bummed. I felt like, Man I wish I’d done that a different way. I went to see him the following day and said, “Hey remember that scene we did by the water?” He said, “Ya, doll. It was great, love.” I told him I felt there was something missing there. He said, “No, no. It was great.” I got very serious and told him he had a chance to pass on his gift and make me a part of his legacy. He laughed. And then he gave me the instruction. Well, you could do this, this, this and this— giving me pointers on how he’d approach it. From then on he really expanded my craft. And after Kings, I wanted to do some studying in London. He wrote me a great letter of recommendation to his alma mater, RADA [the Royal Academy of Dramatic Art] and I went on to study there.

EDGE: I would be remiss if we didn’t talk about your two seasons on The Wire. Nerese Campbell (facing page) was a brilliantly conceived character—a politician who used people and power in the same ways the criminals did. You were disturbingly convincing. 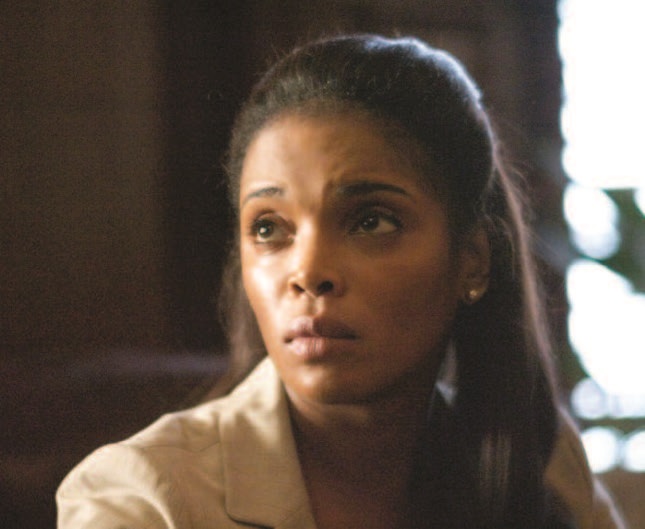 MB: Thank you! I made the conscious decision that if Nerese—as a politician—was going to rub shoulders with the boys, we were going to dance. It was Baltimore. And the truth is that I wanted her to go all the way to Washington. I calculated this idea that having a law degree and going into politics, she knew she would be dealing with people who weren’t necessarily refined. So what would I bring to the table when I wanted to sway a situation? I needed something as strong as a gun—something in her speech that was as potent as gunpowder, something so specific that my words balanced between intelligence, wisdom, and a threat. That’s what I thought Nerese was—all in a sexy body. There was one scene that captured her perfectly. She is going to work in her Mercedes on a sunny day, Bubbles is passing by and hands her a newspaper. Her window goes up, she opens the newspaper and we see that her illegal activity is on the front page. She’s exposed. And we see her, through the window, cursing like it’s her first language. Not like a politician, but like a gangster.

EDGE: So having lived through these two characters, Maggie Lockwood and Nerese Campbell, what do you think you’d be if you weren’t acting?