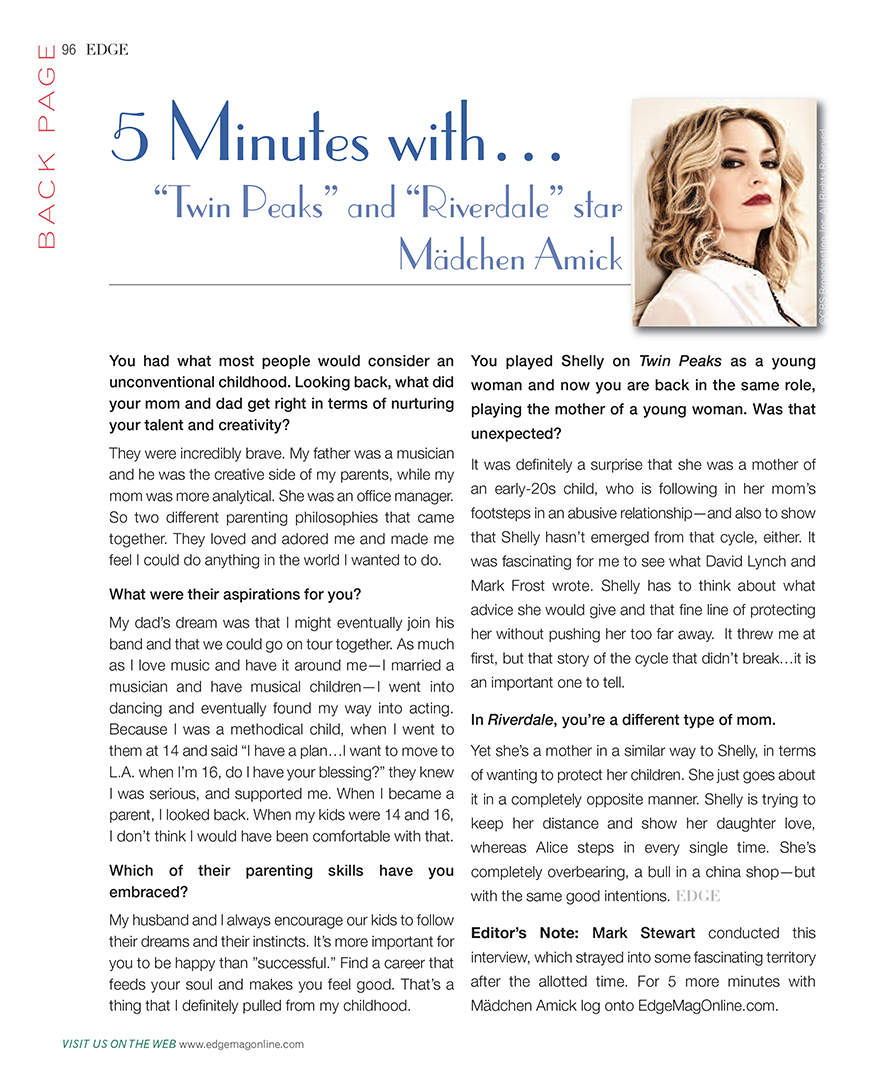 You had what most people would consider an unconventional childhood. Looking back, what did your mom and dad get right in terms of nurturing your talent and creativity?

They were incredibly brave. My father was a musician and he was the creative side of my parents, while my mom was more analytical. She was an office manager.

So two different parenting philosophies that came together.

They loved and adored me and made me feel I could do anything in the world I wanted to do.

What were their aspirations for you?

My dad’s dream was that I might eventually join his band and that we could go on tour together. As much as I love music and have it around me—I married a musician and have musical children—I went into dancing and eventually found my way into acting. Because I was a methodical child when I went to them at 14 and said “I have a plan…I want to move to L.A. when I’m 16, do I have your blessing?” they knew I was serious and supported me. When I became a parent, I looked back. When my kids were 14 and 16, I don’t think I would have been comfortable with that.

Which of their parenting skills have you embraced?

My husband and I always encourage our kids to follow their dreams and their instincts. It’s more important for you to be happy than ”successful.” Find a career that feeds your soul and makes you feel good. That’s a thing that I definitely pulled from my childhood.

You played Shelly on Twin Peaks as a young woman and now you are back in the same role, playing the mother of a young woman. Was that unexpected?

It was definitely a surprise that she was a mother of an early-20s child, who is following in her mom’s footsteps in an abusive relationship—and also to show that Shelly hasn’t emerged from that cycle, either. It was fascinating for me to see what David Lynch and Mark Frost wrote. Shelly has to think about what advice she would give and that fine line of protecting her without pushing her too far away. It threw me at first, but that story of the cycle that didn’t break…it is an important one to tell.

In Riverdale, you’re a different type of mom.

Yet she’s a mother in a similar way to Shelly, in terms of wanting to protect her children. She just goes about it in a completely opposite manner. Shelly is trying to keep her distance and show her daughter love, whereas Alice steps in every single time. She’s completely overbearing, a bull in a china shop—but with the same good intentions.

Editor’s Note: Mark Stewart conducted this interview, which strayed into some fascinating territory after the allotted time. For 5 more minutes with Mädchen Amick log onto EdgeMagOnline.com.