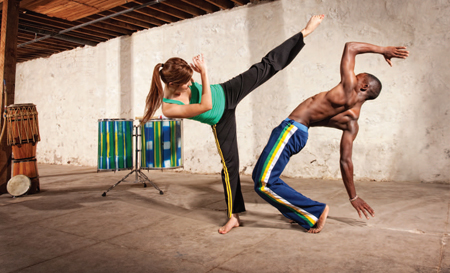 My long road back to Capoeira.

Nearly 15 years have passed since my first encounter with Capoeira. I was taking a walk on the beach in Siesta Key on one of those gentle, lazy days on the Gulf Coast of Florida. My attention was drawn to a group of men and women, dressed in white, gathered at the water’s edge. There was singing and clapping and music and shouts of joyous encouragement. They had formed a circle around two women who looked as if they were dancing or sparring, or possibly something in between. They moved with incredible grace—jumping, spinning, kicking, cartwheeling in the sand.

This was clearly a martial art, I remember thinking, but with a definite emphasis on art.

The participants ranged widely in age and body type. I had no idea what I was watching but I wanted to get involved. I worked out who the leader was, began asking questions and, a week later, I walked into a nearby studio and attended my first Capoeira class.

I am a former dancer. I am graceful and athletic and adventurous. Alas as luck (and genetics) would have it, I did not keep my dancer’s body past my 20s. I had tried yoga and aerobics classes to stay in shape, but they weren’t a good fit. I could sense the other women judging me. I felt excluded. The space felt unkind. My first Capoeira class was an inclusive experience: The group was genuine and warm and welcoming. They walked me through some of the basic steps and were gentle and supportive the first time I entered the roda (circle) to “play” a classmate. Capoeira was part dance, part game—they actually call the confrontations “games.” I kept coming back and learning and playing and feeling more and more comfortable in my own skin. And I began to notice small changes in how my clothes fit.

Life throws you curve balls. Just as I was finding my groove on the laid-back west coast of Florida, I had to relocate to New Jersey. I went through some career changes, health issues and personal stuff (etc., etc.) and never pursued Capoeira after coming north. Besides, I was in the land of cross-fit now—the thumping, screaming, grunting, snorting, sweating, tire-chucking craze that transforms Garden State housewives into stronger (and often scarier) version of themselves.

When in Rome, right? So yes, I went all-in and, you know what? Cross-fit was good for me. I shed 80 pounds in two years and could probably have handled myself in a bar fight. It was maybe a little too competitive for my personality, but I certainly couldn’t argue with the results. Cross-fitting gave me an outlet for my frustration and pushed me beyond my comfort zone. I enjoyed working out in a group and cheering everyone on.

In 2012, I was living with family near the ocean about 18 inches above sea level when Hurricane Sandy pushed six feet of water through our house. We scattered and coped as best we could, relocating thousands of miles apart. My life, which was never particularly predictable (thanks to a bipolar condition) was turned completely inside-out. I bounced around and actually spent more than a year in a halfway house situation. It was imperfect at its best and nightmarish at its worst. And you can probably guess what happened: In the years that followed, those 80 pounds returned, and then some. Five-foot-five and 185 pounds had been far from ideal, but it was doable. I was now 5’5” and 275.

And then one day I rediscovered Capoeira.

It was a Facebook pop-up, an ad for a women’s roda. I don’t know why but in my post-Sandy haze I had forgotten how much I loved Capaoeira and how good it had been for my body and soul. I enrolled in a local class and re-experienced that amazing, welcoming environment. I still had the muscle memory from my Florida days and felt comfortable relearning the steps. I had been too embarrassed about my weight to join an exercise class, but in Capoeira class we worked out ways to kick and dodge and move my large body without injuring myself. I stopped worrying about whatan athlete should look like. When I got winded I took a break and learned the instruments and songs the group played. I was home again. Why did I ever leave?

According to Kasey Sanders (above), who has taught Capoeira in New Jersey for nearly a decade, its appeal is tied to its status as a non-violent martial art. “It allows the players to work out their aggression, but in a fully expressive way. People come to Capoeira to experience its many flavors—it’s partially that it’s a martial art, but also that it encompasses dance, music, health and wellness, and also community building.”

Those who view Capoeira as a New Age workout trend get the vibe, but they shouldn’t gloss over the history. As a martial art it goes back to 16th century Brazil, when slaves had to camouflage their fighting practice to look like dance. Its rhythmic roots, meanwhile, stretch back even further, to ancient times. Fast forward to the present, where suddenly Capoeira is ubiquitous, having gained great momentum internationally in the past 30 years. It is now the fighting style of choice for movie superheroes from Black Panther to Daredevil to Spider-Man. You’ve seen it perhaps without even knowing it.

I won’t be appearing in a Marvel blockbuster anytime soon, so my interest in Capoeira is more about its less heroic benefits. The movement style engages your core, as all the abdominals are firing during a workout. The most basic step in Capoeira is ginga (sway in Portuguese). It’s an escape move from which most of the other steps flow. It’ll be the first thing you learn. It activates the quads, calves and glutes. The biceps, traps and delts are fired up by the overhead movements, such as headstands, handstands and cartwheels. Ginga alsoimpacts your balance by controlling how your weight shifts back and forth. Capoeira promotes strength, stamina, coordination and fitness with every movement sequence. And it offers a superior level of cardio, burning approximately 700 calories per one-hour class.

That is not to say you’ll want to fast-track your way to the most strenuous stuff. According to Jim Dunleavy, PT, DPT, MS, Doctor of Physical Therapy and Director of Rehabilitation Services at Trinitas, like all types of movement activities, a person needs to first find out what his or her body will safely do.

“As we age, our joints and muscle get less flexible,” he warns. “We also lose a small percent of our muscle tissue each year due to the aging process. Anyone who wants to try a martial art such as Capoeira should check with their doctor and get a functional examination from a physical therapist to ensure that it would be safe to engage in such an activity.”

As you push yourself beyond traditional movements, with time, you can feel your confidence grow as your skill level improves. The roda is part martial arts arena and part circular support system, creating positive community with your classmates as you demonstrate progress in your skills and learn from your fellow capoeiristas.

For me, Capoeira also helped reduce stress. It is a unique workout. The euphoria I’ve felt after class is indescribable. The added bonus is that I enjoy the artistic and cultural components of Capoeira almost as much as the physical ones. You are immersing yourself in an intriguing part of Brazilian music and history in a joyous, playful way that teaches self-defense skills and yet, at the same time, promotes unity and non-violence. Not always easy to understand as an outsider, but what’s not to like, right?

I should mention that newbies are not expected to pull off Black Panther moves on the first day of class. It takes a while before the handstands and cartwheels come. If you are a natural athlete or have dance training, that can speed the process along. Either way, you will feel the physical and spiritual benefits after your first couple of classes. Even skeptics admit there is something different about getting into Capoeira. And they are correct. It’s not just about the cool fighting moves. A true capoeirista is someone who embraces the culture, learns the songs and ultimately can play all the instruments.

As you gain experience and proficiency in Capoeira, your style will be your own. It will reflect your unique personality in ways no other martial arts can. A year or so after you start, you will be good enough to earn your first belt grade, or corda. It can take a decade or more to attain mestre (master) status, but capoeiristas are qualified to teach before reaching that level, usually after seven years or so of training and study. If you are thinking about joining a class, ask about the level of training the teacher has.