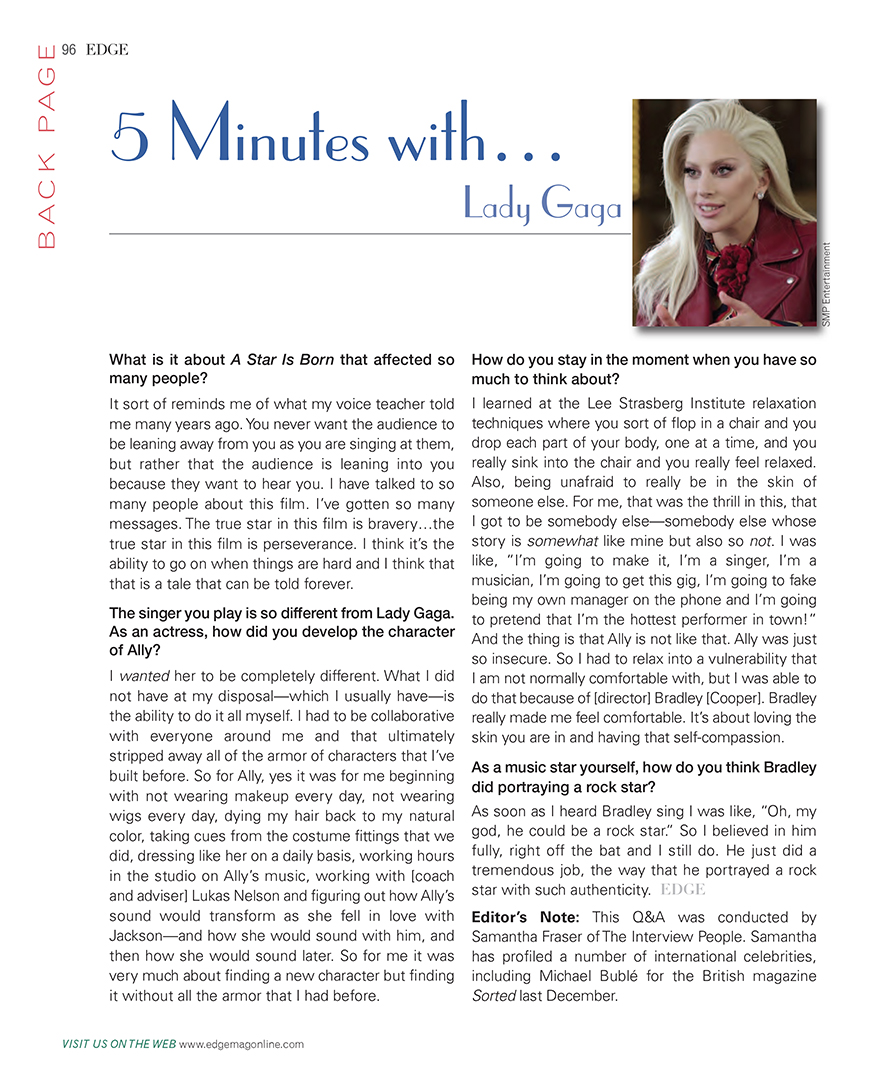 What is it about A Star Is Born that affected so many people?

It sort of reminds me of what my voice teacher told me many years ago. You never want the audience to be leaning away from you as you are singing at them, but rather that the audience is leaning into you because they want to hear you. I have talked to so many people about this film. I’ve gotten so many messages. The true star in this film is bravery…the true star in this film is perseverance. I think it’s the ability to go on when things are hard and I think that that is a tale that can be told forever.

The singer you play is so different from Lady Gaga. As an actress, how did you develop the character of Ally?

I wanted her to be completely different. What I did not have at my disposal—which I usually have—is the ability to do it all myself. I had to be collaborative with everyone around me and that ultimately stripped away all of the armor of characters that I’ve built before. So for Ally, yes it was for me beginning with not wearing makeup every day, not wearing wigs every day, dying my hair back to my natural color, taking cues from the costume fittings that we did, dressing like her on a daily basis, working hours in the studio on Ally’s music, working with [coach and adviser] Lukas Nelson and figuring out how Ally’s sound would transform as she fell in love with Jackson—and how she would sound with him, and then how she would sound later. So for me it was very much about finding a new character but finding it without all the armor that I had before.

How do you stay in the moment when you have so much to think about?

I learned at the Lee Strasberg Institute relaxation techniques where you sort of flop in a chair and you drop each part of your body, one at a time, and you really sink into the chair and you really feel relaxed. Also, being unafraid to really be in the skin of someone else. For me, that was the thrill in this, that I got to be somebody else—somebody else whose story is somewhat like mine but also so not. I was like, “I’m going to make it, I’m a singer, I’m a musician, I’m going to get this gig, I’m going to fake being my own manager on the phone and I’m going to pretend that I’m the hottest performer in town!” And the thing is that Ally is not like that. Ally was just so insecure. So I had to relax into a vulnerability that I am not normally comfortable with, but I was able to do that because of [director] Bradley [Cooper]. Bradley really made me feel comfortable. It’s about loving the skin you are in and having that self-compassion.

As a music star yourself, how do you think Bradley did portraying a rock star?

As soon as I heard Bradley sing I was like, “Oh, my god, he could be a rock star.” So I believed in him fully, right off the bat and I still do. He just did a tremendous job, the way that he portrayed a rock star with such authenticity.

Editor’s Note: This Q&A was conducted by Samantha Fraser of The Interview People. Samantha has profiled a number of international celebrities, including Michael Bublé for the British magazine Sorted last December.