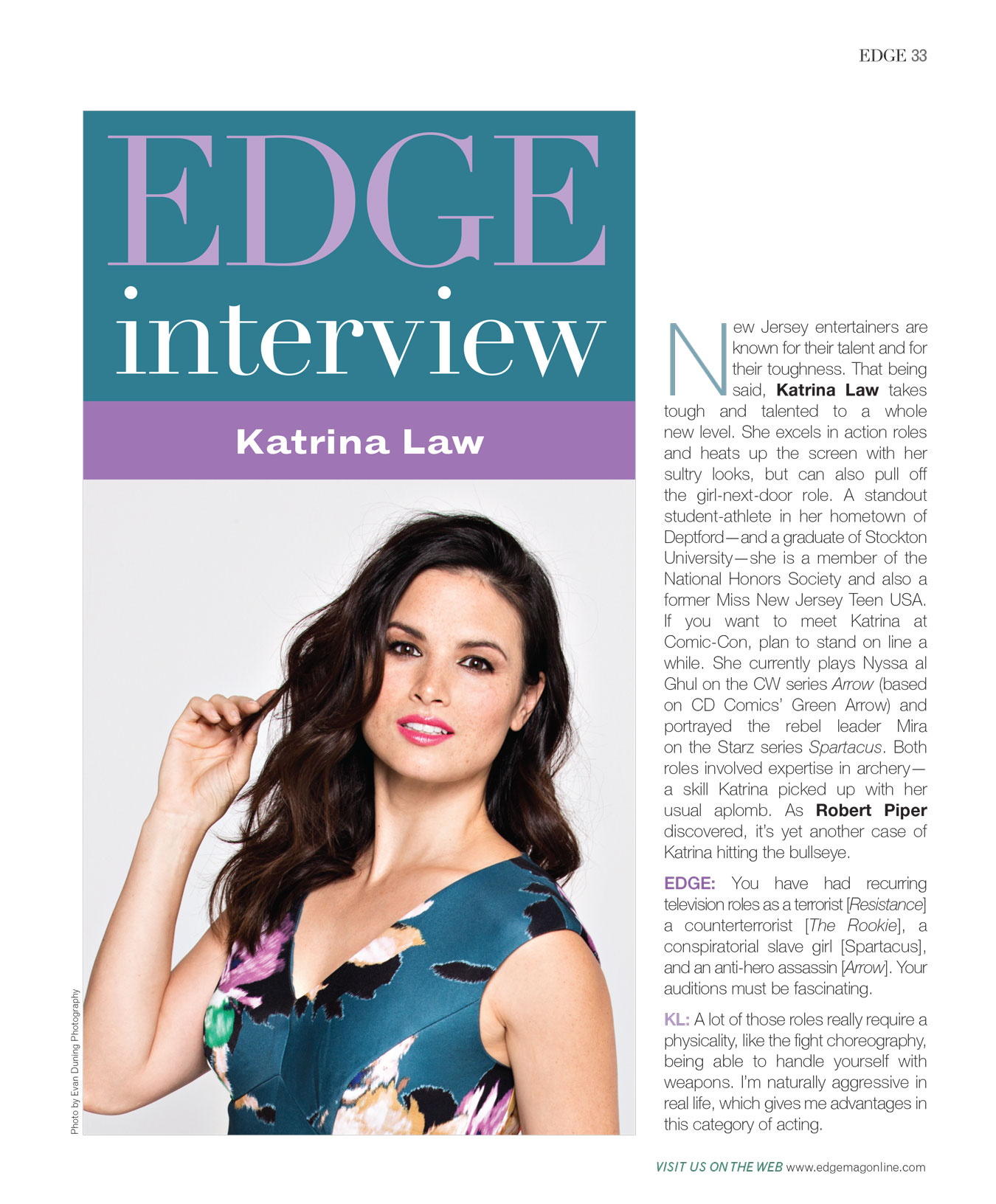 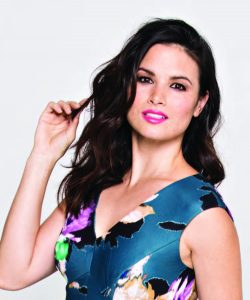 New Jersey entertainers are known for their talent and for their toughness. That being said, Katrina Law takes tough and talented to a whole new level. She excels in action roles and heats up the screen with her sultry looks, but can also pull off the girl-next-door role. A standout student-athlete in her hometown of Deptford—and a graduate of Stockton University—she is a member of the National Honors Society and also a former Miss New Jersey Teen USA. If you want to meet Katrina at Comic-Con, plan to stand on line a while. She currently plays Nyssa al Ghul on the CW series Arrow (based on DC Comics’ Green Arrow) and portrayed the rebel leader Mira on the Starz series Spartacus. Both roles involved expertise in archery—a skill Katrina picked up with her usual aplomb. As Robert Piper discovered, it’s yet another case of Katrina hitting the bullseye.

EDGE: You have had recurring television roles as a terrorist [Resistance] a counterterrorist [The Rookie], a conspiratorial slave girl [Spartacus], and an anti-hero assassin [Arrow]. Your auditions must be fascinating.

KL: A lot of those roles really require a physicality, like the ﬁght choreography, being able to handle yourself with weapons. I’m naturally aggressive in real life, which gives me advantages in this category of acting. 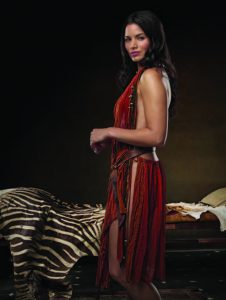 EDGE: What is it that draws you to these roles? Do they reﬂect some aspect of your personality?

KL: [Laughs] When I get really aggravated with somebody, I feel like some of my fantasy characters do. But other than that, I’m pretty easygoing and happy most of the time!

EDGE: What sports did you play in high school?

KL: I ran track and played soccer. I also was a cheerleader, a dancer and I weight-lifted.

EDGE: Was there one activity that stands out as having prepared you particularly well for your career?

KL: Yes, dancing, because it’s about learning choreography and maintaining it. I did everything—ballet, tap, jazz, modern, mirror ball, ﬂamenco, ballroom dancing. So when it comes to ﬁght choreography, for me it’s a more aggressive form of dancing. Knowing that my body can pick up the movements and retain them is the biggest aspect. 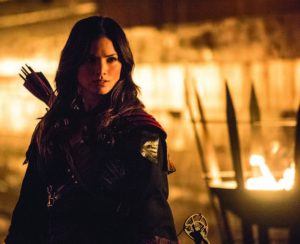 EDGE: You had a part in the 2000 ﬁlm Lucky Numbers as a teenager. How did that happen?

KL: Lucky Numbers…I can’t even remember what year that was. They needed extras in Harrisburg, Pennsylvania, and I remember just being so excited. It was November and they wanted one of the extras to jump in the river, pretending it was summer. And I was like, Oh, I’ll totally do it. I was completely frozen afterwards, but then I realized that I really did enjoy doing it. I was thinking about making a career in acting anyway, so I asked the production assistant, like, how do I get a job on this? Or how do I volunteer to be a PA on this ﬁlm? Thankfully, Nora Ephron was very kind to me. She allowed me to be on-set the entire month they were in Harrisburg. Then, eventually, there was a part where she needed four teenagers screaming out of a car at John Travolta. And she asked if I wanted to be a screaming teenager? I said, Yes. And that’s how I got my S.A.G. card.

EDGE: Who made the greatest impression on you during Lucky Numbers?

KL: Oh, well, John Travolta was so charming and so lovely and beautiful. He smiled at everyone. He was so kind when he entered the room—with his fellow actors and to me. He’s just very charming and lovely. I think I was a little star-struck by him. 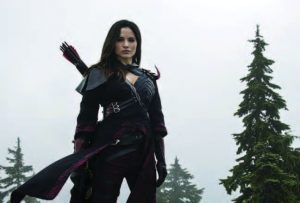 EDGE: You could have gone to any college you wanted, including Rowan, in your hometown. What appealed to you about Stockton University?

KL: I was undecided about a career. I originally thought I was going to school as a dancer, but my high-school guidance counselor convinced me to go for physical therapy. However, in the back of my head, I knew I wasn’t going to be a physical therapist. Meanwhile, I’d always had my ﬁngers dabble a little bit in Marine Biology. So in Stockton I essentially picked the school that offered all three.

EDGE: At what point did acting become a focus in your life?

KL: It was after I had gotten into Stockton. I decided to try doing summer stock and I ended up booking the role of Cassie in A Chorus Line. It was the ﬁrst time that I sang, acted, and danced on stage. It was so fulﬁlling and one of the most enjoyable things I’ve ever done in my entire life. I went back to school and immediately changed my major from marine biology to theater. That’s kind of when it just took off.

EDGE: The Starz series Spartacus was one of your ﬁrst major roles. How excited were you to get that part?

KL: I cried when I booked it. I just broke down and started sobbing hysterically in terrible joy tears, if that makes sense. I was so excited. I’d auditioned for it on a Monday, booked it on a Wednesday, and that same Wednesday they basically told me I needed to leave for New Zealand for the next three months that Friday. So I get on the plane and it was my ﬁrst time ever ﬂying in ﬁrst class—I was so excited about the service and the amenities, and I watched four movies on the way over there. As soon as I got to the set, they threw me into hair and makeup and then into cast. By the end of the night I was delirious. It was a lesson learned to always sleep on the plane.

EDGE: How did you get on with your co-star Lucy Lawless?

KL: She was very kind. She introduced me to everybody—by the end of the day I think I had learned over 200 names. Just watching her act is a lesson in and of itself. Every now and then you think about somebody and why they have “star power,” or what it is about them that makes them succeed beyond others. Well, when you look into Lucy’s eyes for the ﬁrst time they are so pure and focused that it just makes you understand why she got to where she is.

EDGE: How did the role in Arrow come about?

KL: I originally auditioned for a role on The Tomorrow People. It’s cast by David Rapaport, who also casts Arrow. I was completely wrong for the part—it was a British girl—but he said, “I want you to come back for this other role on Arrow tomorrow—and bring the accent.” I was like. Alright. So I auditioned and I ended up getting a call-back for it. This time they wanted me to do a chemistry read. My sides were originally with Stephen Amell, but they had me do them with Caity Lotz. I said, “These sides are very ﬂirty and very much about our relationship. Is she my sister? Is she my friend? Am I a lesbian?” They said, “We can’t tell you.” So I basically walk into the audition for the chemistry read and there’s Caity Lotz. Apparently, we had chemistry, and that’s how I got my part.

EDGE: Were you into comics as a kid?

KL: I wasn’t into comics per se, but I was a fan of DC and Marvel as much as anyone else.

EDGE: What do you think of the whole Comic-Con culture now that you’re a part of it?

KL: I love it! I absolutely adore that being a nerd is now cool! They can ﬁnally come out in the open and be proud, and they have a place to celebrate what they love and the characters they develop. It’s just a beautiful place.

EDGE: What’s on the horizon for you project-wise?

KL: When I started off, I never thought that I’d land roles like I have on Spartacus and Arrow. I couldn’t have asked for better roles—it was so much fun, and both shows were international hits. So I hope that I continue to be surprised by really great projects. Upcoming I have Darkness Rising coming out and I have an episode of Uncle Buck, which is a sitcom for ABC, coming out.

EDGE: It seems like the theme of your life is “Set a goal, make it happen.” Do you ever think about getting involved behind the cameras?

KL: Yes and no. I feel like I’m a little disorganized. I have a very artistic mind and it’s very scattered. I don’t think I can focus enough to be able to direct. But who knows? Maybe. We shall see.

EDGE: Okay, a couple of ﬁnal Jersey questions. You’ve been to a lot of beaches since you left New Jersey. Where do Ocean City and the other Jersey Shore beaches you know rank in the world of beaches?

EDGE: Finally, if I ask someone from your hometown what’s the difference between a South Jersey Girl and a North Jersey Girl, what answer will I get?

KL: South Jersey girls are cooler! [Laughs] Oh, my god…I’m gonna get in so much trouble for that one.

Editor’s Note: Robert Piper is a freelance writer who lives in Chicago. He covers entertainment, pop culture, and health & wellness. Robert’s writing has appeared in The Hufﬁngton Post, Live Happy, and Origin Magazine.