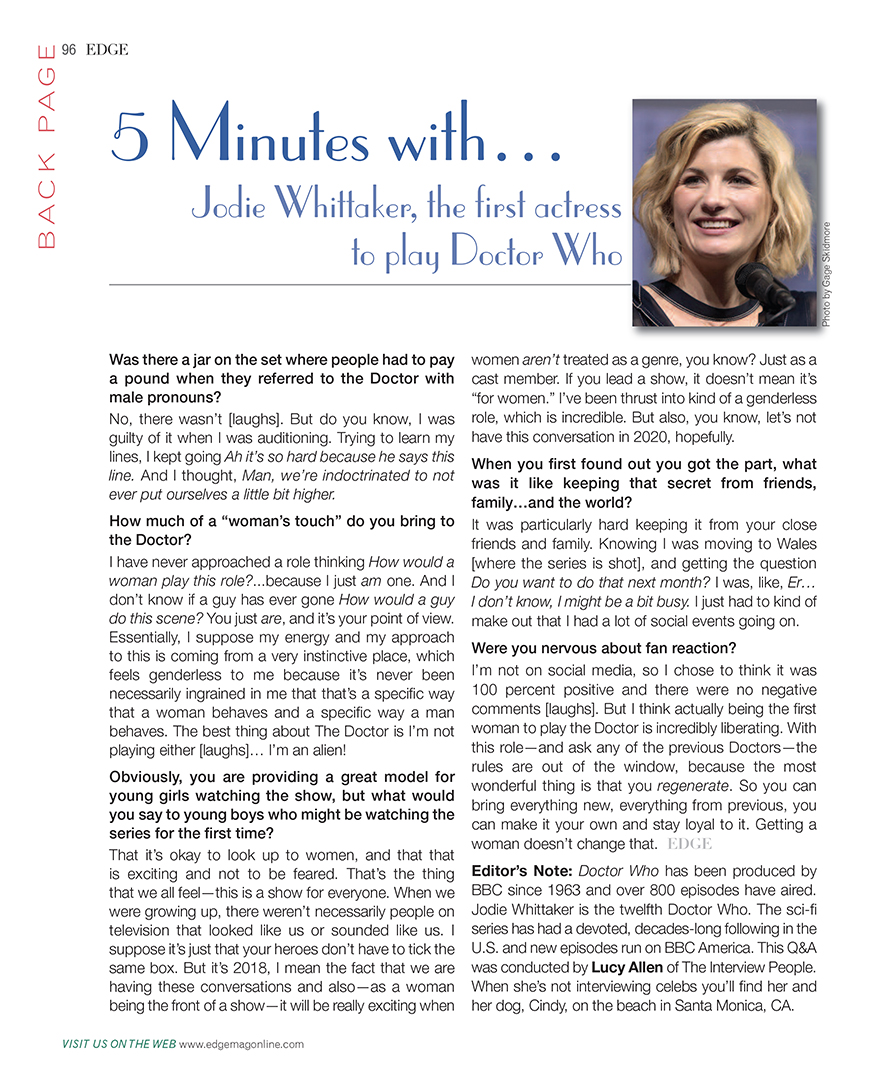 Jodie Whittaker, the first actress to play Doctor Who

Was there a jar on the set where people had to pay a pound when they referred to the Doctor with male pronouns?

No, there wasn’t [laughs]. But do you know, I was guilty of it when I was auditioning. Trying to learn my lines, I kept going Ah it’s so hard because he says this line. And I thought, Man, we’re indoctrinated to not ever put ourselves a little bit higher.

How much of a “woman’s touch” do you bring to the Doctor?

I have never approached a role thinking How would a woman play this role?…because I just am one. And I don’t know if a guy has ever gone How would a guy do this scene? You just are, and it’s your point of view. Essentially, I suppose my energy and my approach to this is coming from a very instinctive place, which feels genderless to me because it’s never been necessarily ingrained in me that that’s a specific way that a woman behaves and a specific way a man behaves. The best thing about The Doctor is I’m not playing either [laughs]… I’m an alien!

Obviously, you are providing a great model for young girls watching the show, but what would you say to young boys who might be watching the series for the first time?

That it’s okay to look up to women, and that that is exciting and not to be feared. That’s the thing that we all feel—this is a show for everyone. When we were growing up, there weren’t necessarily people on television that looked like us or sounded like us. I suppose it’s just that your heroes don’t have to tick the same box. But it’s 2018, I mean the fact that we are having these conversations and also—as a woman being the front of a show—it will be really exciting when women aren’t treated as a genre, you know? Just as a cast member. If you lead a show, it doesn’t mean it’s “for women.” I’ve been thrust into kind of a genderless role, which is incredible. But also, you know, let’s not have this conversation in 2020, hopefully.

When you first found out you got the part, what was it like keeping that secret from friends, family…and the world?

It was particularly hard keeping it from your close friends and family. Knowing I was moving to Wales [where the series is shot], and getting the question Do you want to do that next month? I was, like, Er… I don’t know, I might be a bit busy. I just had to kind of make out that I had a lot of social events going on.

Were you nervous about fan reaction?

I’m not on social media, so I chose to think it was 100 percent positive and there were no negative comments [laughs]. But I think actually being the first woman to play the Doctor is incredibly liberating. With this role—and ask any of the previous Doctors—the rules are out of the window because the most wonderful thing is that you regenerate. So you can bring everything new, everything from previous, you can make it your own and stay loyal to it. Getting a woman doesn’t change that.

Editor’s Note: Doctor Who has been produced by BBC since 1963 and over 800 episodes have aired. Jodie Whittaker is the twelfth Doctor Who. The sci-fi series has had a devoted, decades-long following in the U.S. and new episodes run on BBC America. This Q&A was conducted by Lucy Allen of The Interview People. When she’s not interviewing celebs you’ll find her and her dog, Cindy, on the beach in Santa Monica, CA.