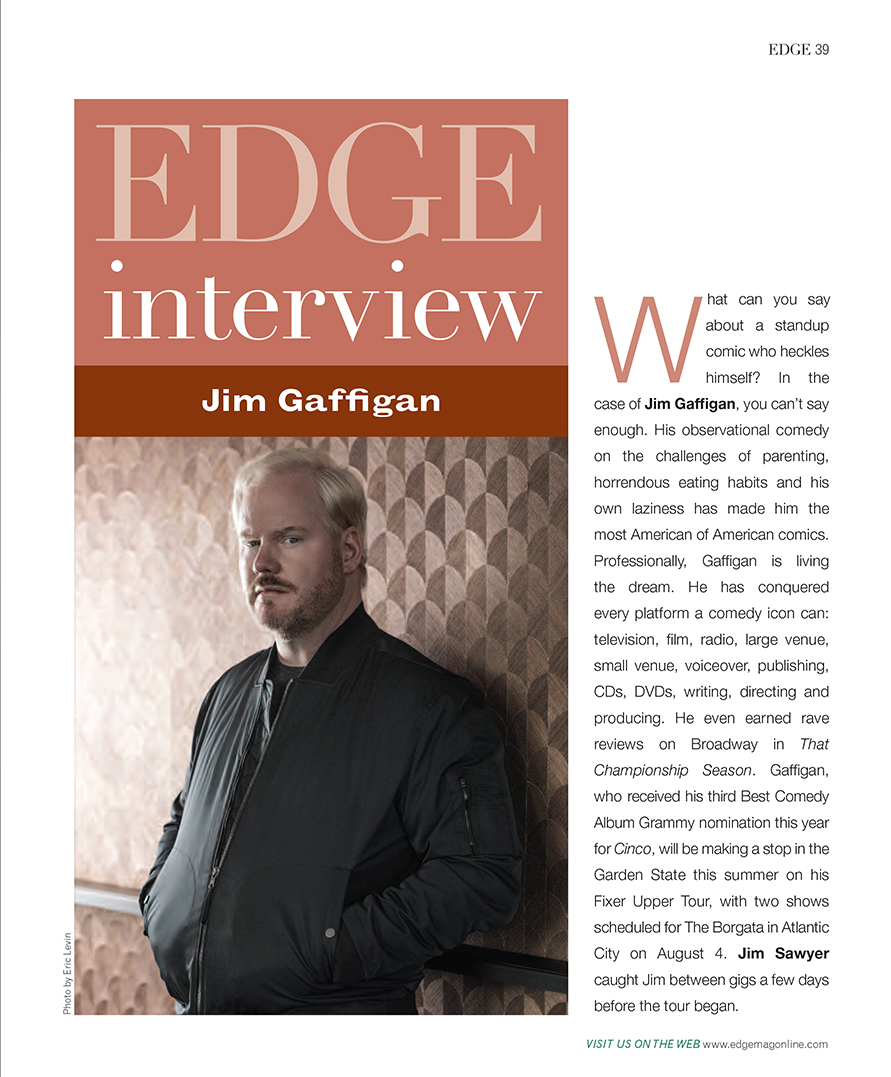 What can you say about a standup comic who heckles himself? In the case of Jim Gaffigan, you can’t say enough. His observational comedy on the challenges of parenting, horrendous eating habits, and his own laziness has made him the most American of American comics. Professionally, Gaffigan is living the dream. He has conquered every platform a comedy icon can: television, film, radio, large venue, small venue, voiceover, publishing, CDs, DVDs, writing, directing and producing. He even earned rave reviews on Broadway in That Championship Season. Gaffigan, who received his third Best Comedy Album Grammy nomination this year for Cinco, will be making a stop in the Garden State this summer on his Fixer Upper Tour, with two shows scheduled for The Borgata in Atlantic City on August 4. Jim Sawyer caught Jim between gigs a few days before the tour began.

EDGE: Is there such a thing as a “New Jersey audience?”

JG: New Jersey is three different worlds. And I’m sure it’s more than that. There’s Northern New Jersey, which is the suburb of New York, and there’s South Jersey, which is decidedly influenced by Philly. And then there’s the Jersey Shore.

EDGE: What do they have in common?

JG: You know, there is something about the Northeast. I chose to live in the northeast—I talk about this in my new special. What I love about Jersey is that it has this Northeast anger and passion, where, if you don’t deliver they’re going to throw you out. Yet Jersey also has this quality of “being taken on” by other states in the Northeast. I’m from one of those states, Indiana, which has to deal with being the butt of other cities’ jokes. So there’s a similar underdog quality that translates to a certain amount of pride.

EDGE: Do you set aside specific time for writing or do you jot down ideas as they come to you and develop them when you can?

JG: You know it’s always changing. Sometimes it is jotting down things on my iPhone and kind of fooling around. I wish it was more like that. But, sometimes it’s, you know, 20 minutes before a show talking to my friend who works with me on the show and I’m just coming up with an idea. Yeah, so I wish I could figure out where it all comes from because I’d go to that mind a lot more. But, in the end, there is nothing more rewarding than coming up with a new joke, or a new chunk, a topic.

EDGE: When you have reached the top of the comedy business- which you have- you have to think a lot more about the “business of comedy.” How has your business model changed over the years, and where do you see it evolving in the future?

JG: I think standup comedy, over the time that I’ve done it, has changed so dramatically in just accessibility to the public. And it’s changed from you get five minutes, and you try to get on the Tonight Show to you provide hour specials and they’re consumed on different platforms. My journey has changed so much. But I love writing new hours of material and finding myself getting better at standup.

EDGE: Is that a constant challenge?

JG: It’s all about self-refinement, right? So I don’t know. I love standup so much and it’s something I feel like I’m getting better at. So I like where it’s heading and, who knows, it’s like, in five years it will be a completely different business. When I did Beyond The Pale on Comedy Central that’s probably one of the more impactful things that happened in my career. But, in the next 10 years, there will probably be two other things that are the equivalent of YouTube or Netflix or satellite radio. Things just really keep changing and making standup more accessible to the world frankly.

EDGE: What are the parenting challenges that are peculiar to your particular profession?

JG: I think the unique one is probably balancing travel. I mean I’ve made a point of traveling as much as I can with my kids. You know, you forgo kind of making money on some trips, but I wouldn’t do it any other way. And I think the other thing is as a comedian, by necessity, you have to peak at night. Whereas parenting, it’s a 24-hour job.

EDGE: What for you is the most important part?

JG: I think the morning is a very important job. When I get the opportunity to go to school with my kids or drop them off…I wish I could do that more often. But, if I’m flying in from doing a show and I get home at 1:00 a.m., it’s unlikely that I’m going to be able to get up and make them eggs.

EDGE: You’ll be at The Borgata this summer. Casino crowds traditionally have been different than theater and club crowds. Do you find that’s still the case?

JG: It used to be much more the case. But now, you know, whether it’s The Borgata or Vegas, I think people are there for the shows. It’s kind of changed dramatically—just as performing at colleges has changed dramatically. Obviously, the casinos want people to stick around. But a lot of the venues in casinos are just so beautiful, they’re the best in the area, just great venues.

Editor’s Note: Although no one would call Jim Gaffigan a visionary, in 2005’s Beyond the Pale, he did correctly predict that Dunkin Donuts would one day unveil a glazed donut breakfast sandwich. Of course, he meant it as a joke.