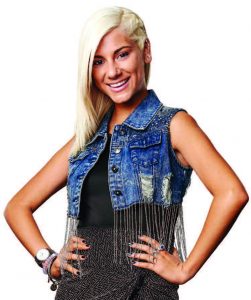 Idol worship has come to New Jersey in the form of Jackie Cole, a spunky blond teenage chanteuse known to millions of music fans by her three-letter nickname, Jax. A native of East Brunswick, Jax powered her way to the ﬁnals of American Idol (Season 14) this spring, making it farther than any New Jersey singer in the show’s history. She is an original in every sense of the word—her look, her attitude and her voice—right down to the (non-permanent) trademark X on her left cheek. Tracey Smith caught Jax heading into the Final 3.

Somehow, she fell one round short of victory…but we suspect we’ll be hearing from her long after the two ﬁnalists have faded from memory.

EDGE: What kind of advice do American Idol contestants get from the judges?

JC: All three of the judges commented that I am an artistic person and to stay artistic and focus on being creative. The most inspiring advice was to stay in the moment, stay present, because you can lose yourself in a lot of other moments, instead of the one you’re actually in. In the performance, it’s important to stay in the moment.

EDGE: What goes through your head when you perform in front of millions of television viewers?

JC: It depends on the song. I often think of my parents and family members—because they’re sitting right in front of me!They are getting to watch the most incredible experience of my lifetime. Sometimes I’ll think about a guy, again, depending on the lyrics. A lot of times I’ll just think about myself.

EDGE: How far back can you trace your singing career?

JC: I have been singing since I was able to talk. And I was fortunate enough to have known my calling as an entertainer for a very long time—since I was the age of three. I’ve always wanted to sing. As far back as I can remember.

EDGE: What have your musical inﬂuences been? 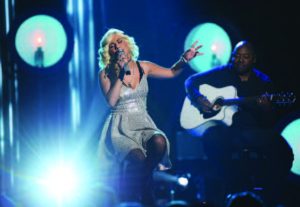 JC: I love all kinds of music. When I say that, I really mean it. I love music from the 40’s and on! I think my number-one inspiration was probably Janis Joplin. It’s pretty cool to perform her songs.  I’m inﬂuenced by all women of power, like Joan Jett and Stevie Nicks, who I actually just saw live with Fleetwood Mac, which was insane. I like Gwen Stefani and No Doubt. I like Haley Williams a lot. And Lady Gaga. But I also like Billy Joel and Simon and Garfunkel. And whatever is new on pop radio. In terms of mentors, I have my vocal coach. He’s incredible. I go to vocal lessons once a week in the city. With the amount of singing I do, there is no choice but to keep going and improving.c 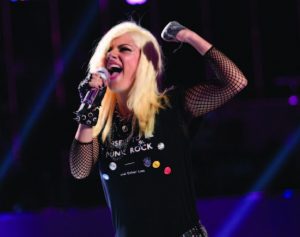 EDGE: Of the people the contestants worked with on the show, who were the most memorable?

JC: We learned something different from every one of them. I think that maybe the most enjoyment I got out of mentorship was with Kelly Clarkson, because she was a former contestant. There’s nobody who could relate to us any more than she could, in that sense. But yeah, everybody brought something different to the table. I loved Boy George, Florida Georgia Line, Nile Rodgers, everyone was really great. But Kelly Clarkson was truly the most relatable. 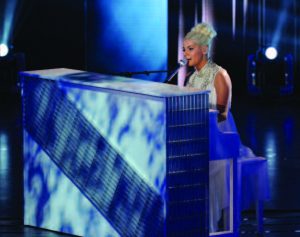 EDGE: As you move forward in the American Idol competition, how do you deal with the inevitable highs and lows?

JC: It’s not easy. It’s really important to ﬁnd a balance between those things, because if you don’t, then you can wind up in either of those two dangerous extremes. For example, I try to stay away from comments in blogs for the most part, because if they’re really great or really awful, either way they are likely to affect my mindset.  It’s like when a football team thinks way ahead in the season and ruins the actual next game they have to play. That’s what I meant before about just having to stay in each moment.

EDGE: You know, there was a famous football coach named Bear Bryant who used to tell his players, “Show class, have pride, and display character—if you do, winning takes care of itself.”

JC: It’s true. You should be your own worst critic, you should compete with yourself and learn from your mistakes. It’s important to give off that kind of class. And I think it’s important to inspire people, to show the world that this is a beautiful thing, a beautiful process, and that however American Idol ends, we’re all just trying to leave our mark on this planet. Presenting yourself in that kind of way really shows the honesty of the process.

EDGE: And if you do win?

JC: The ﬁrst thing I’m going to do is celebrate with my family and [laughs] go get some Taco Bell!

EDGE: You came into this competition as a Jersey Girl. Are you ready to spread your wings a little more?

JC: I love my hometown and New York and everything, but I want to travel. Part of my job and purpose is to touch people in as many places as I can. I am really ready to branch off.

EDGE: So have you named your ﬁrst CD yet?

JC: The Undeﬁned Variable with an X [laughs]. No, it would deﬁnitely be a pop record, but with more of a rock edge…something a little darker than your usual pop record. I want to make an honest pop record.

EDGE: What was it like to hear yourself on iTunes for the ﬁrst time?

JC: It was surreal. It’s, like, people can actually pay for my recordings. I don’t even know how to feel about it. I actually bought my own recording on iTunes [laughs] and felt guilty about it. Then again, it’s really great to hear what we worked on in the studio. 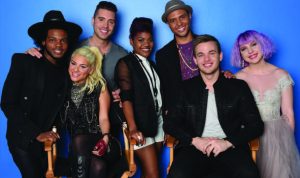