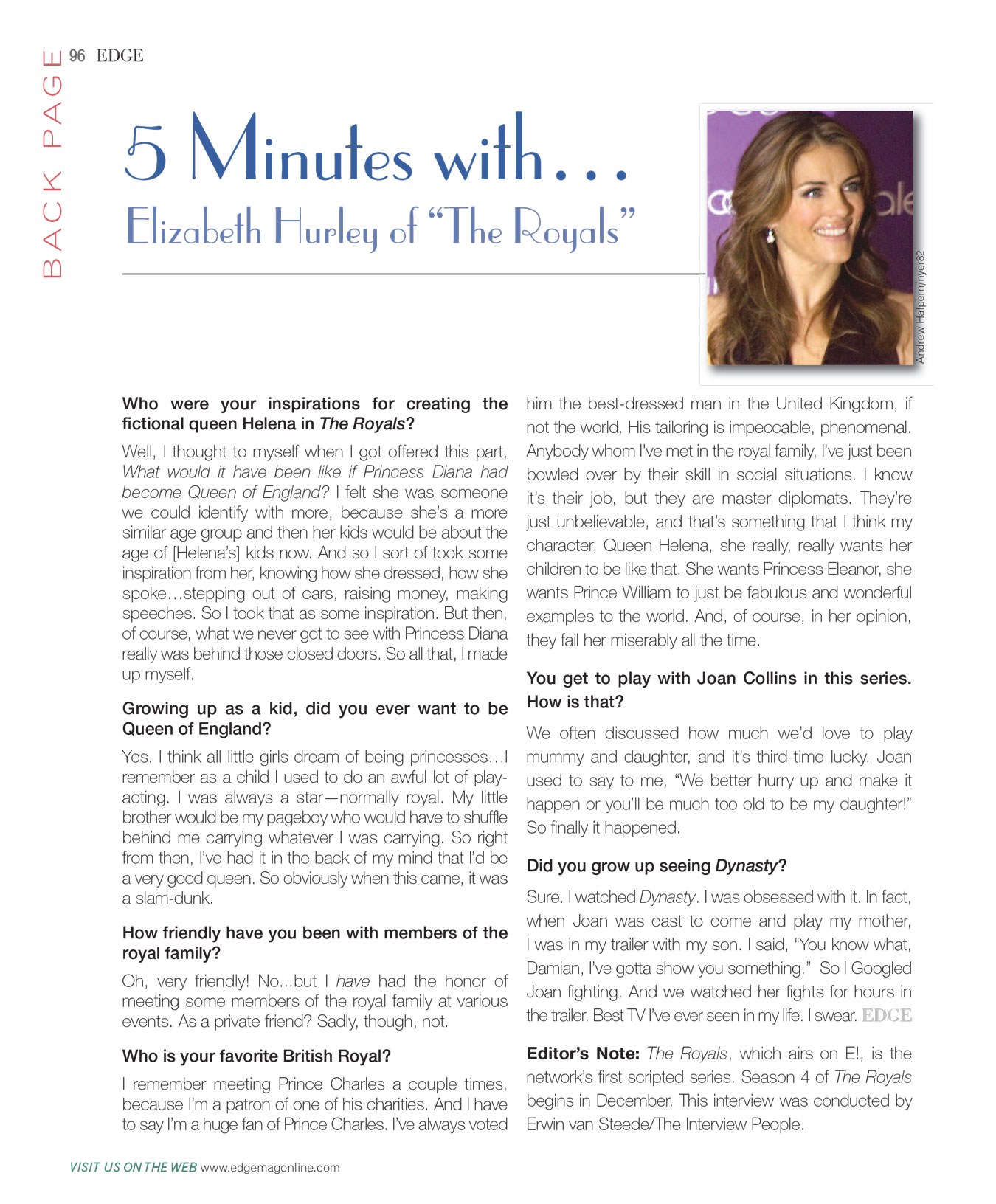 Who were your inspirations for creating the ﬁctional queen Helena in The Royals?

Well, I thought to myself when I got offered this part, What would it have been like if Princess Diana had become Queen of England? I felt she was someone we could identify with more, because she’s a more similar age group and then her kids would be about the age of [Helena’s] kids now. And so I sort of took some inspiration from her, knowing how she dressed, how she spoke…stepping out of cars, raising money, making speeches. So I took that as some inspiration. But then, of course, what we never got to see with Princess Diana really was behind those closed doors. So all that, I made up myself.

Growing up as a kid, did you ever want to be Queen of England?

Yes. I think all little girls dream of being princesses…I remember as a child I used to do an awful lot of play-acting. I was always a star—normally royal.  My little brother would be my pageboy who would have to shufﬂe behind me carrying whatever I was carrying. So right from then, I’ve had it in the back of my mind that I’d be a very good queen. So obviously when this came, it was a slam-dunk.

How friendly have you been with members of the royal family?

Oh, very friendly! No…but I have had the honor of meeting some members of the royal family at various events. As a private friend? Sadly, though, not.

Who is your favorite British Royal?

I remember meeting Prince Charles a couple times, because I’m a patron of one of his charities. And I have to say I’m a huge fan of Prince Charles. I’ve always voted him the best-dressed man in the United Kingdom, if not the world. His tailoring is impeccable, phenomenal. Anybody whom I’ve met in the royal family, I’ve just been bowled over by their skill in social situations. I know it’s their job, but they are master diplomats. They’re just unbelievable, and that’s something that I think my character, Queen Helena, she really, really wants her children to be like that. She wants Princess Eleanor, she wants Prince William to just be fabulous and wonderful examples to the world. And, of course, in her opinion, they fail her miserably all the time.

You get to play with Joan Collins in this series. How is that?

We often discussed how much we’d love to play mummy and daughter, and it’s third-time lucky. Joan used to say to me, “We better hurry up and make it happen or you’ll be much too old to be my daughter!” So ﬁnally it happened.

Did you grow up seeing Dynasty?

Sure. I watched Dynasty. I was obsessed with it. In fact, when Joan was cast to come and play my mother, I was in my trailer with my son. I said, “You know what, Damian, I’ve gotta show you something.”  So I Googled Joan ﬁghting. And we watched her ﬁghts for hours in the trailer. Best TV I’ve ever seen in my life. I swear.

Editor’s Note: The Royals, which airs on E!, is the network’s ﬁrst scripted series. Season 4 of The Royals begins in December. This interview was conducted by Erwin van Steede/The Interview People.