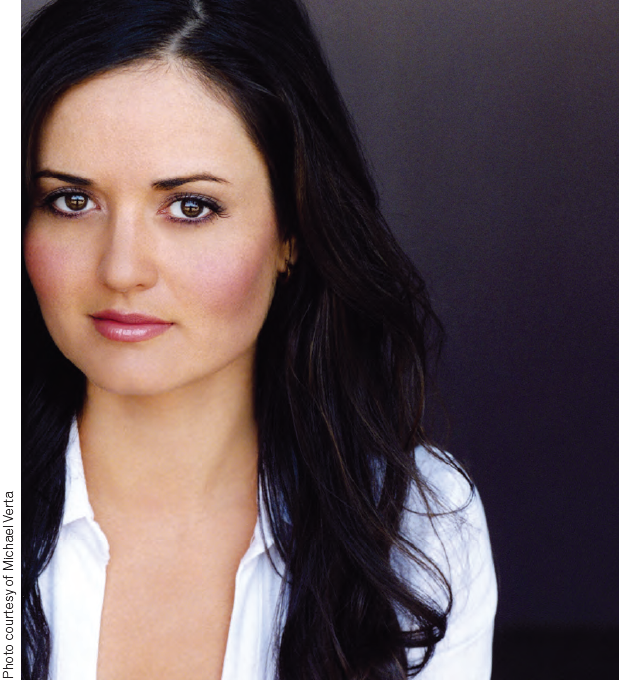 In the television and publishing industries, you often hear the expression, “It’s a numbers game.” Perhaps that explains how DANICA McKELLAR found success in both. As Winnie Cooper on The Wonder Years, she captured the hearts and minds of a generation of viewers, and had one of the most-recognized faces in America. More recently, McKellar has connected with an entirely new generation of young people—this time as an author whose captivating and empowering books on math have made the New York Times Best Seller List. In 2010, McKellar turned her attention toward multiplication, as she welcomed her first child into the world. EDGE Assignments Editor Zack Burgess caught Danica at home in California between books and, it turns out, between feedings. 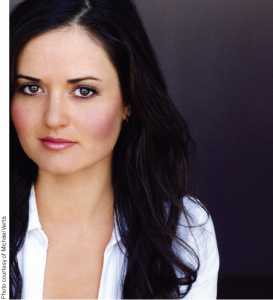 EDGE: You are a new mom, a working actress and a best-selling author. Are your math skills finally being tested when it comes to dividing your time?

DM: (Laughing) I’m not sure if the skill that’s being tested now has ever been in a category of my life before: Sleep Deprivation. There’s not a lot of math that has come into being a mother yet, but I’m sure that there will be. One other thing, I’m breastfeeding— so there is no formula, no bottles, no calculation of how many ounces and how often. There’s just breastfeeding on demand, the most non-mathematical way to go.

EDGE: There are a lot of interesting ways to go with the math degree you earned at UCLA. What were some of the options you considered?

DM: I actually considered very strongly becoming a professor of mathematics. But I missed acting. I missed entertainment. So for me to be able to write entertaining math books, to combine the two things that I love, is perfect.

EDGE: How did the math books come about?

DM: After I graduated, I went back to acting. I was on The West Wing and doing some other things. Because I missed math and didn’t want to abandon it, I 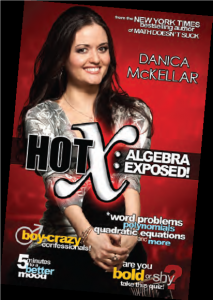 started a math advice column in which I answered people’s math questions. After I finished The West Wing, there was an article about me in the Science section of The New York Times. From that article came an offer to write a math book. I realized that I had been preparing to write this book for a long time without knowing it—first, by being a math major and, second, by writing the column.

EDGE: Your first book, Math Doesn’t Suck, was written with teenage girls in mind. You actually spoke before Congress about the importance of women in mathematics.

DM: Yes, and that’s when I knew the kind of math book I wanted to write. The middle school years are the most crucial for girls and math. It’s a time when they decide they’re not good at math because of social pressures and stereotypes. It’s a confidence issue. Middle school is a time in a girl’s life when she starts asking herself questions like, Who am I? It’s a vulnerable time in terms of self-image.

EDGE: That was the first of three titles. Next came Kiss My Math and Hot X: Algebra Exposed.

DM: I had no Idea I was going to be writing more than one book. I thought the first wasn’t going to do well; I just wanted to help some people. So for it to take off the way that it did was crazy. To be named ABC’s “Person of the Week” and to have two books become New York Times best sellers, it was amazing.

EDGE: What distinguishes the approach of your books from, say, the type of teaching students would receive in a classroom environment?

DM: It’s completely different. First, the math books look like teen magazines and the tone is extremely conversational. It’s like we’re getting together, girl-to-girl. I tell funny stories and make little analogies to help them remember things. The books work for boys, too. I get letters from boys who say, “Hey, the books are kind of girlie, but now I know how to solve for X, so thanks.”

EDGE: How crucial is the role of the teacher in terms of fostering a love of math rather than a fear of math?

DM: The way the math is presented makes all the difference. If a teacher in any subject is fun and friendly, that’s how the material is going to appear. If you have a teacher who doesn’t like math and was just thrown into that position— which happens all of the time, because it’s not the most popular subject—then you end up with kids who are confused and scared. When I was in seventh grade I had that experience. We asked questions and didn’t get good answers. I thought it was me, that I was stupid. But another teacher came in midway through the year. She was fun, friendly and just exceptional. The vibe was so different. I started to understand the math and, as I relaxed more, things made sense. That showed me just how much presentation matters. When I write the books I keep that in mind.

EDGE: Do you imagine you’re writing for yourself at that age?

DM: I do. I try to bring math into that world. I have all my journals from that time, so what I do is read sections to give me perspective of who I am writing for. I can look back and say, “I remember what that felt like.” So I talk about issues that girls are already thinking about, like popularity. I weave the math into their lives so that they can remember the math concept based on these fun stories and topics. That’s what I would have wanted at that age.

EDGE: What is the message beyond the math you try to get through?

DM: Girls are seeing negative stereotypes and getting a message from every conceivable media source—especially reality TV—that it’s okay to be slutty and ditzy in order to be attractive. This message keeps getting through again and again, and it’s so disturbing to me. Girls think if they’re too smart then they won’t be attractive. Or if they’re attractive that they can’t be smart. My message is that you can be anything you want to be, and the smarter and stronger you are by challenging yourself with math, the more fabulous you’ll be—and the better decisions you’ll make—in anything that you do.

EDGE: Did you get to spend much time in the classroom as a young actress?

DM: The Wonder Years started when I was in the seventh grade. The show was filmed, so any day that I actually wasn’t in a scene I went to my regular school. On average, I was on the set one or two days a week. It wasn’t until the very last season that they decided to put Winnie Cooper in way more of the episodes. My last year I was out of the classroom more than half the time. We had great tutors on the set. The producers did not skimp on that, which I am more than grateful for. In my senior year, when I was on the set all of the time, I had a dedicated calculus tutor because my class had surpassed what the regular tutor could do.

EDGE: What were the positive aspects of balancing schoolwork and acting?

DM: During The Wonder Years I learned how to compartmentalize. “Okay,” I’d say, “for these twenty minutes I’m working on this math test and for the next two hours I’m doing this emotional scene. Now I’m going to go back and finish that math test.” Having to switch gears like that really trained me to have a dual career in both entertainment and as a writer now.

EDGE: Is it fun to hear “Winnie Cooper was my first crush” or is it just creepy and annoying?

DM: It’s flattering. The show was so loved by so many people. And there are a lot worse things to be recognized for! People tell me all the time how they watched the show together as a family. Now most of the kids reading my books don’t know The Wonder Years—they know me as “That girl from the math books.” I love it! I actually like to tell stories from The Wonder Years in my books. It’s an opportunity to show how someone can lead what you think is a glamorous life and still make really smart choices. You can study and be a responsible person who is happy in life because you made smart choices. 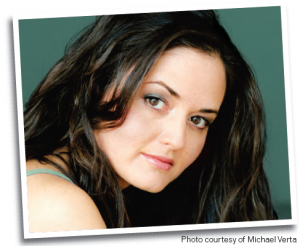 EDGE: You went into UCLA with the ambition of being a filmmaker, and came out with a math degree. What brought that change of course?

DM: My parents were a great influence and they sent me off right, but I still went through a lot of those insecurities that you go through when you’ve been on television and you’re still recognized for one thing. You’re a kid, and you are taught that that’s who you are, and you’re like, “Wow! Is that my whole self-value, my self-worth? What else would I be valued for if I didn’t have that?” Well, in college, I discovered that math could give that to me. I felt smart, I felt capable and it had nothing to do with Hollywood. I thought, I know I was going to be a film major, but I’m going to be a math major. I like this and to heck with it—I’m going to do this. I don’t how or why this is going to help my life, but I want to do something that makes me really feel good about myself.

EDGE: The theme of this issue is Childish Things. Have you put away Winnie Cooper, or will that character always play a part in your life?

DM: The answer to both questions is Yes. Because people remember The Wonder Years, it is still a part of my life. However, I have moved on—meaning, I don’t identify with it anymore. In large part because of being a math major and writing the books, I have a new self-reference point. Something I identify with. In the halls of UCLA, where I became a calculus tutor, I went from “That girl on TV” to “That girl who helped me pass calculus.” The math really helped me leave behind the childish things and move forward.

EDGE: And as you look forward, would you say your dream job is in the entertainment industry or in the world of education?

DM: I don’t know. I love them both. It’s as if I had two kids and you asked which one I loved more? I love being able to do both. I guess if I had to choose, I would have to say writing math books. It feels like this is what I was put on this planet to do. I feel like I’m making a big difference. EDGE