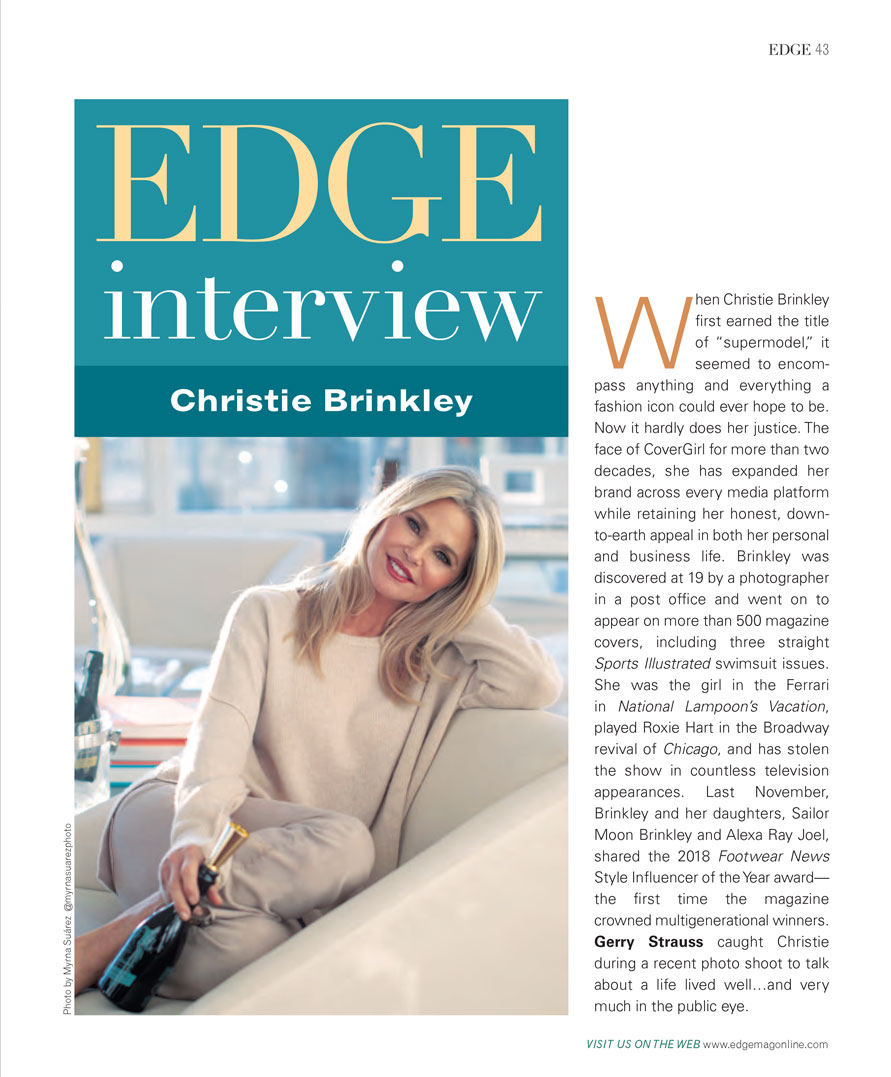 When Christie Brinkley first earned the title of “supermodel,” it seemed to encompass anything and everything a fashion icon could ever hope to be. Now it hardly does her justice. The face of CoverGirl for more than two decades, she has expanded her brand across every media platform while retaining her honest, down-to-earth appeal in both her personal and business life. Brinkley was discovered at 19 by a photographer in a post office and went on to appear on more than 500 magazine covers, including three straight Sports Illustrated swimsuit issues. She was the girl in the Ferrari in National Lampoon’s Vacation, played Roxie Hart in the Broadway revival of Chicago, and has stolen the show in countless television appearances. Last November, Brinkley and her daughters, Sailor Moon Brinkley and Alexa Ray Joel, shared the 2018 Footwear News Style Influencer of the Year award—the first time the magazine crowned multigenerational winners. Gerry Strauss caught Christie during a recent photoshoot to talk about a life lived well…and very much in the public eye.

EDGE: Looking back, what do you think has enabled you to enjoy such a long and meaningful career?

CB: You know what? I was very, very lucky. It was just a timing thing. If it had been five years earlier or five years later, then that photographer that spotted me never would have paid attention to me. But it was a moment when things were starting to change and they were looking away from the very skinny, unapproachable hottie-model type and looking more for an athletic, sporty kind of healthy vibe. And I just happened to be a little bit rounder than some models were at that point. What I thought was my weakness actually ended up being my strength. I just lucked out.

EDGE: What’s the key to success in the business today?

CB: When I started out, they were looking for clothes hangers. Now they’re hiring people, personalities and looking for depth. It’s a beautiful trend that I hope is really a movement of inclusivity and recognizing someone for the person. Today, it’s about authenticity and individuality. We’re really embracing a much more expansive idea of what’s beautiful. Authenticity plays a part, and confidence plays a part, and the industry is really looking for people that represent these different areas. It really wants to make a statement of inclusivity and beauty in the individuality of each person. It’s the most beautiful trend that I have seen in my more than 40 years in this industry.

EDGE: How were you able to stand out in your first few years in the business?

CB: You know, I think what helped was the fact that I never really thought of myself as a model. I always considered it a job that I was doing on my way to doing “something else.” I thought of myself as an artist. I actually went to Paris to study art, and I loved drawing and painting and making things, being creative. Modeling was a way to pay my bills—and a great way to see the world. I’m naturally curious. I love trying things out, so I was going to try modeling out. I was making money and I was traveling, but I was always doing other things. I was just being me. But I think it was those others things kept people interested in me.

CB: Because I was rounder than most models at that moment, I was doing a lot of bathing suit shoots. I found myself on beautiful beaches all over the world. So I wrote a book about fitness and the beach. I also loved taking pictures. I ended up, inadvertently, working for Don King as a boxing photographer, which the media found interesting. And I was always interested in the environment. At one point when Bush and Cheney, two oilmen, were running for office, I decided that I’d like to go to work for Al Gore. I became a delegate from the First Congressional District of New York. I really got into trying to alert people about climate change. Along the way, I managed to make a couple movies and I starred as Roxie Hart in Chicago on Broadway. I think it’s that adventurous streak and that curiosity that that has helped elongate my career as a model.

EDGE: I think people find you relatable, too.

CB: Well, my private life has been not-so-private, and very tumultuous. I’ve been through some pretty low lows, but yes, women, can relate. About 10 years ago, I discovered the Internet and started talking to women about their problems. If a woman said to me, I’m trying to divorce a narcissist, too, I would respond, Here’s what I learned, and here’s how I can help you, and here’s organizations that can help you so you don’t feel like you’re going crazy and you don’t feel alone. Because dealing with a malignant narcissist is very, very difficult. Again, that’s another layer where I can connect with women. They’ll say to me, I feel like I know you, because I’ve been around a long time and they’ve been through things with me and I’ve been through things with them. Even before I got into the Internet, I would give interviews and the stuff that I talked about would be helpful in getting them through some of those tough times.

EDGE: Has your daughter, Sailor, inherited your appetite for variety?

CB: It’s so funny. We’re so alike in that she didn’t have this overwhelming desire to be a model. But she also has the same curiosity and modeling really is very much about, as I said, the individual and highlighting the individual’s authenticity. So you can do well if you know yourself well. Sailor is very in touch with herself. Right now, she’s very passionate about making short films, and she’s working as a photographer and a model. That’s what this industry will do for you now, because it is looking for multidimensional people. Modeling’s a great job because of that. It really is a door-opener. If you’re into coding, like Karlie Kloss, modeling has allowed her to reach out to thousands and thousands of young girls and change their lives by teaching them coding. If you’re into makeup, you can create a beauty company. It really is an extraordinary time of opportunity. I think it’s a great career.

EDGE: You still have to be able to “turn it on” during a photoshoot or runway show. What was your secret?

CB: I’m actually quite a hammy person in real life. As a kid, I subjected my parents to my “shows”—just about every morning, they were awakened with a new performance. I even had tap shoes. Imagine a kid growing up in the ’sixties with wall-to-wall carpeting and tap shoes [laughs], there was no place to tap in the ’sixties; It was really very shag-adelic. But I used to get up on the fireplace mantle and put on a show or pop into their bedroom in the morning and be like, Ta-da! Here comes the show, ladies and gentlemen! Back in the day, when photographers used film instead of this digital stuff, you used to get into a real rhythm with the photographer. It was a real thing. You’d be exchanging ideas and moving from being very sultry to looking like you’re the happiest person in the world—and conveying those moods in imagery. Some people say that’s why a lot of models don’t transition well into movies and TV. They’re too aware of the camera and too aware of playing to the camera, while in acting you have to be aware of it and know where it is—but be able to leave it alone and not relate to it. Also, as you begin to receive notoriety in the modeling world, you start to show up at events and often give a speech or whatever—you get used to speaking in front of audiences. I think that that helped me with doing Chicago because I could face a large audience.

EDGE: Given that you grew up on the West Coast, what’s kept you on the East Coast all these years?

CB: I’ve raised my kids here. It’s their home. Wherever you have your childhood I think is where you think of home. I always think of Malibu as my home because that’s where I made my forts, under those bushes and trees, and roamed in the hills. And you know everything about it. Whenever I go back to California, I love it.

EDGE: What do you love about living in the city?

CB: It’s so hard to put your finger on it. New York City is the most exciting city, and you just get a vibe being here that’s energizing. You never know who you’re going to meet or bump into. And just a two-hour drive away are some of the most beautiful beaches anywhere in the world. You really can get away from it all and feel like you can get to a beach where you’re the only person walking on it and find little pieces of driftwood and seashells. It’s so lovely, that combination. I just really like it here.

EDGE: Would you say that authenticity and enthusiasm are the keys to the success of the Christie Brinkley brand? It seems that the products you’ve put out into the world or supported have always been in line with your philosophy of good eating and good living.

CB: I think that’s the reason I’ve lasted. If I put my name on something, it’s because I truly believe in it and I truly think it’s going to improve your life. My makeup line and my skincare products are cruelty-free and distributed in environmentally sensitive packaging. I always try to follow through and give my products a heart and a conscience. That dedication and belief in my products, and what they’ll do for you, has been a key to the longevity I‘ve enjoyed. If you just endorse any old thing, people are not going to trust you. You have to be truthful and really love what you do and what you’re using—and know that it’s going to make somebody else’s life better. That’s the recipe for success.

CB: I am. I really believe in organics. It is so much better for our bodies and for the power to heal our planet. So my line of Bellissimo Prosecco is 100 percent organic—and also certified vegan.

CB: I know. When I first got in the business, I was like, “Do you really need to certify it as vegan? Nobody puts meat in it.” It turns out that many sparkling wines are filtered through animal parts, from fish guts to cow intestines, and you will get traces of animal debris in your wine. I’ve always loved the bubbly, and I was asked if I wanted to participate in creating this company. They came and explained to me that they had found a vineyard in Treviso, Italy—where Prosecco comes from—that was 100 percent organic. So I was very interested. When they poured me a glass and I tasted it, I was like, “Oh my gosh, definitely. It’s amazing.” We’re the fastest-growing Prosecco in America and we’re heading for Asia, New Zealand, and Australia next. There are no additives and we have zero percent sugar, so you can have your Prosecco guilt-free. There is such an epidemic of people with diabetes and pre-diabetes—they should check with their doctor, of course, but I believe that we are a great option for them.