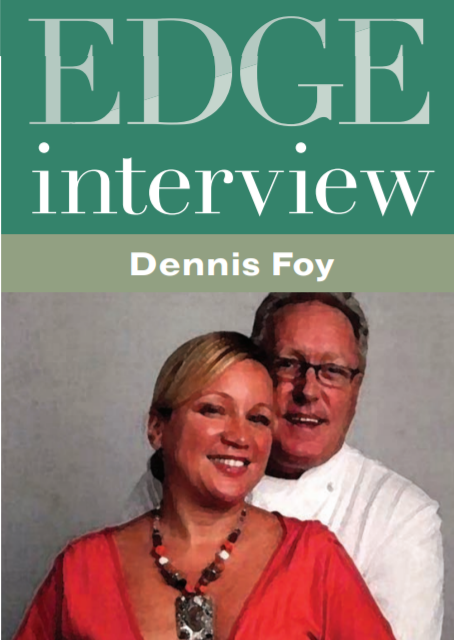 In 1974, when Alice Waters’s Chez Panisse was a toddler, a young chef named DENNIS FOY opened a restaurant some 3,000 miles from the mecca in Berkeley, California that was setting a new standard for dining in America. Located in Meyersville— thought of in those days as west of nowhere—the Tarragon Tree drew people curious about a way of cooking that was ingredient-focused, seasonal, and dependent on the nearest farmers. Technique was critical but, like Waters and her foraged-food menus, Foy couldn’t, and wouldn’t, write his bill of fare until he’d made the rounds of local farms.

Foy’s philosophy remained the same as he moved Tarragon Tree from Meyersville to Chatham, opened Les Delices in Whippany with his brother, John, and crossed the Hudson to Manhattan, where he widened his audience with Mondrian. There were other restaurants: Toto, Townsquare, casual Shore spots in Bay Head and Point Pleasant Beach, as well as EQ and Dennis Foy in New York, both in partnership
with his wife, Estella Quinones. He often shared his kitchen space, as well as his experience and passion for local fare, with novice chefs—who themselves made serious marks on American cuisine, including the top judge of “Top Chef,” Tom Colicchio, and James Beard Award winners Debbie Ponzek and Craig Shelton. Foy also kicked in his two cents as consulting chef on major restaurants in New Jersey.

Now, after heart surgery and recovery, after a successful series of gallery shows that put the chef’s paintings in the spotlight, Foy’s back full-time in New Jersey. He and Estella last fall bought and re-fashioned the former Lawrenceville Inn, christening it Dennis Foy. This year, the chef and painter added another job to his résumé: student. He’s taking classes at the University of Pennsylvania in Philadelphia. ANDREA CLURFELD caught up with him between kitchen shifts and classes

EDGE: For those who don’t know you are the granddaddy of modern American food in New Jersey, talk a bit about your early restaurants

DF: In 1974, when we opened Tarragon Tree in Meyersville, there was a farm nearby where we’d get eggs still warm. That’s what we did— go from this farm to that farm. When we moved Tarragon Tree to Chatham, we kept that focus. In 1978, I also did Les Delices with my brother. Tarragon Tree was a precursor, really, to any modern restaurant in America. Out of that, I built other restaurants that helped to change food in America. It was a great time. The people who came to the restaurants and came through the kitchens were some of the biggest names in food. Critics, chefs. A lot of menus today are written the way I started writing menus back in the 1970s, early 1980s.

DF: Tom was my sous chef at Mondrian. I hired him because I knew him, knew his potential. A lot was happening in those days; I was also opening Toto, in Summit. Still doing Tarragon Tree.

EDGE: And you were hiring Debbie Ponzek and Craig Shelton.

DF: Debbie Ponzek [later the Beard Award-winning chef at Montrachet in New York] did a stage at Tarragon Tree. I just
love her. She’s a great talent, a great person, a great chef. She learned everything, worked hard, and deserves every
bit of her success. Debbie will tell you I drilled her. But she learned how to run a kitchen and how to cook. Craig Shelton[former chef-owner of Ryland Inn, Whitehouse, and anotherBeard Award winner] was a gifted, talented chef. Very bright, well-educated. We all were committed to our belief systems and very devoted to doing it right. I have been very fortunate to always have had a great deal of talent around me.

EDGE: Today, the buzzwords in food are local, sustainable and organic. Does that seem old hat to you?

DF: What’s really wild is that I’m returning to my roots— to what I was doing at Tarragon Tree in 1974. Getting eggs warm from the nest. Finding berries in the woods. Having people bring us things—wild things, berries, mushrooms— because they see what we’re doing. We’ve come full circle. So that is nothing new to me. The seasonality of food always has to be second nature; it has to be a natural reaction. It’s funny to remember this now, but back then, the Frelinghuysen’s used to bring me beefsteak tomatoes from their gardens every summer. My customers just did that, back in Meyersville and Chatham.

EDGE: How are you bringing local farms to your table at Dennis Foy in Lawrenceville today?

DF: The new menu literally is designed to be farm-to-table food. We found a guy who has black honey. Great stuff. We showcase it. Right near us are three farms. Two orchards. I feel almost like I’m back in the pool I first dove into in 1974. I source a lot of my produce through Nature’s Reward, the produce market over on Bridge Avenue in Point Pleasant; I’ve worked with them for years, going back to my places in Bay Head and Point Pleasant. It’s the best. I’ll go out of my way to go there.

DF: I think they have. There are farmers with serious degrees in agriculture and animal husbandry. New Jersey has some of the top growers. I think that if people become more attuned to what’s happening, the concept of the small farm can be reinvented. You don’t need big spreads. Just the right crops. The bottom line is that the farm-to-table concept is good economy—for both sides.

EDGE: How does all this Jersey bounty influence your cooking?

DF: I buy every day. So it’s basic. Keep it simple, keep it color-coded, keep it organic. It’s like the Depression-era mothers who made the most of their gardens

EDGE: So you think this has legs, that there’s a future to local-sustainable-organic—for the home cook and for restaurants?

DF: Absolutely. Lately, I’ve been thinking a lot about how full circle this has come for me. I’m surprised, but not surprised to be realizing that everything old is new again. Look at it this way: If you have your own victory garden, you’re a step ahead. Having that food in your backyard will make you recalibrate your diet in a good way. That could be a big change. Frankly, I don’t think there’s much new that’s going to come down the road for restaurants. Gradual influences, not major changes. It’s great that so many different cultures are coming to America and adding ideas to menus

EDGE: What’s on the menu these days at Dennis Foy?

DF: I’m cooking more simply, but bringing out more flavor in my ingredients. I spent the past year recovering from
heart surgery. I ate fairly well, and I still eat well. But I’m more focused today. I’d love to have, say, two elements on a plate. Two absolutely pristine things. Sea scallops from Point Pleasant with a parsnip cream. Just a touch of a balsamic reduction. That’s it. Pristine, elegant. I’m not doing frou-frou food. I started getting ice cream, the best ice cream, from Jerry Reilly, who runs Halo Farm [in Mercer County]. I taste his ice cream and I’m totally blown away. I’ve been in New Jersey 35 years and I’m still discovering what’s here.