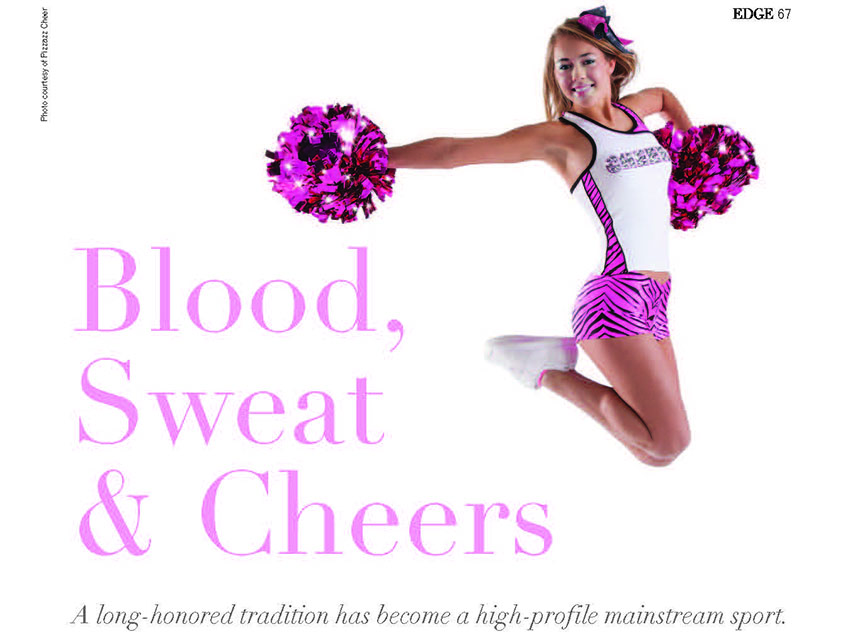 A long-honored tradition has become a high-profile mainstream sport.

Our image of cheerleaders hasn’t changed much over the years. Perky and pretty, with pleated skirts, ponytails and pom-poms, they are throwbacks to a bygone era which, truthfully, probably never existed. The reality of cheerleading, however, has changed dramatically within the course of one or two generations. Nowadays, cheerleaders are performing and competing on a scale once reserved for elite athletes. Skilled in jumps, stunts, spins, tumbling and formation, they must possess the grace of a dancer, the strength of a football player and the body control of a gymnast, while performing short, supercharged choreographed routines to all genres of music.

Something else is different now: For the best of the best, career opportunities abound.

Some 3.7 million people participate in cheer nationwide, either through community and school squads or private cheer gyms, according to estimates from Varsity, the biggest and best-known industry provider of cheerleading products and services. And despite debates of their merits, or lack thereof, cheerleaders do indeed serve an important purpose.

“Cheerleaders are extremely effective at uniting a crowd, getting them excited and yelling,” says Mike Stickle, coach of the Rutgers Coed Cheer Team and an Emmy-winning writer and producer of live events, television, and video. “That’s not an easy task when competing with a 300-piece marching band, piped in music and 100,000 rowdy people. Without question, cheerleaders are an instrumental part of any game. They bring atmosphere. They also play a major role in alumni functions as important representatives of their university. It’s by no means a stretch to call cheerleaders performers.”

At the college level, Stickle adds, cheerleading is not only all business, it’s coed business.

“It takes a certain kind of guy to join a cheer squad,” he says. “A lot were high school athletes who ﬁnd it empowering to throw and catch their cheermates with crowds gaping in awe. But honestly, they’re just equipment. No one is watching the guy doing the tossing. They’re watching the girl sailing through the air. Nonetheless, as cheer has morphed into more of a sport than an activity, we’re seeing more interest from the guys. Plus, there are incentives.”

Indeed, scores of major universities offer full cheerleading scholarships. Dozens of smaller colleges offer stipends or partial scholarships. While cheer falls within the purview of the athletic department at many schools—thus providing scholarships and travel money—at many other schools it falls under the student activities umbrella. There they fundraise to meet expenses. The disparity exists because the National Collegiate Athletic Association, the non-proﬁt association regulating athletes of 1,281 institutions, conferences and organizations, doesn’t deem cheer a sport.  Given the ever-ascending proﬁle of cheer, this has become a bone of signiﬁcant contention. The NCAA committee voted not to classify cheer as a sport in 2014.

“At the moment, cheerleading is not an NCAA-sponsored championship, and we haven’t had any new proposals submitted to the committee,” says NCAA spokesperson Megan Durham. Reasons cited were lack of participation opportunities and feedback received from NCAA schools and student athletes. “That doesn’t mean competitive cheerleading won’t one day become a sport,” Durham adds.

The American Medical Association (AMA), meanwhile, staunchly supports designating cheerleading a sport. In an email to Edge, the AMA said it recognizes the potential dangers of cheerleading, “including the potential for concussion and catastrophic injury, and supports the implementation of recommendations designed to improve its safety.” Those recommendations include proper training of coaches, avoidance of inappropriate surfaces when performing stunts and adherence to rules for the proper execution of stunts.

While cheerleading isn’t ofﬁcially recognized as a sport, the AMA added it is unequivocally a business. Indeed, some competitions host over 26,000 athletes with 30,000 spectators. Event producers proﬁt not only from participation, but also from merchandise and apparel sales. Host cities’ hospitality industries enjoy a boost. Gyms see an increase in memberships.

“All Star Cheer has even recently gone mainstream with the release of a second movie, The Champions League 2,” points out Elaine Pascale, owner and founder of Freehold’s World Cup All Stars—one of the country’s premier cheering gyms, boasting more than 35 competitive teams. “It provides insight into the exciting world of cheer. Plus, social media is full of proﬁles with tens of thousands of followers hoping to hear the latest news about their favorite cheer programs. It’s easy to realize the potential progress cheer can have at this pace.”

To be sure, Memphis-based Varsity raked in more than $1.2 billion in sales last year. Not surprisingly, the company attracted the eye of “smart money” investors and last November Varsity was acquired for an undisclosed amount by Charlesbank Capital Partners. Headquartered in Boston and New York City, Charlesbank is a middle-market private equity investment management ﬁrm with some $3 billion in assets under management.

The irony is that cheerleading can be a relatively inexpensive activity. More and more, however, the price of growth has translated into a higher price tag. Some now pony up big bucks for private competitions, training, equipment, and camps. Joining a competitive cheer gym costs around$2,000 to $3,000 per year. Private lessons can cost $100 an hour. Add in uniforms, practice clothes, personalized duffel bags, summer camps, tumbling classes, squad practices with professional cheerleading programs, and choreography fees, and the annual tally for cheer families soars into the many thousands. Furthermore, cheerleaders

have a big inﬂuence on their families overall spending habits, especially in terms of clothing, health and beauty products, food, and travel. For members of competitive cheer teams (there are an estimated 5,000-plus nationwide) the annual bill for a family can easily reach the ﬁve-ﬁgure level.

As the competitive aspects of cheerleading have grown, so too have the opportunities. Most professional cheerleaders aren’t in it for the money, but for the doors it may open. NBA and NFL cheerleaders make very little per game. However, full-time coaches of cheer squads earn $40,000 to more than $70,000 a year. And of course, a handful go on to bigger and better things, perhaps most famously Paula Abdul, who launched her show biz career as a member of the LA Lakers dance team. Did you know that Ike, FDR and George W. Bush were high-school cheerleaders? So were Jimmy Stewart, Steve Martin, Meryl Streep, Sandra Bullock, Christina Aguilera and Jennifer Lawrence. Katie Couric was a cheerleader at the University of Virginia and Rick Perry whipped up crowds at Texas A&M. Lindsay Lohan, Miley Cyrus, Madonna (right), Mitt Romney and Samuel L. Jackson were members of cheer squads. Let that soak in for a second.

While fame and fortune are not guaranteed, cheer-leaders at top colleges are recruited by a wide range of industries in need of dynamic sales people. Pharmaceutical companies are especially fond of that combination of enthusiasm and discipline cheerleaders bring to the table. Overall awareness of cheerleading talent has also increased with the proliferation of college sports broadcasts.

Whether done for fun, competition or as a career-builder, cheerleading has lasting inﬂuences. According to Stickle, cheer provides participants with “powerful lessons in community, character, camaraderie, skill development, and goal setting.” Pascale says it teaches young people to overcome fears and learn that there are no limitations to what they can achieve.”

Editor’s Note: Diane Alter was a Pop Warner cheerleader growing up in Rumson. She is pictured above standing on the far right.