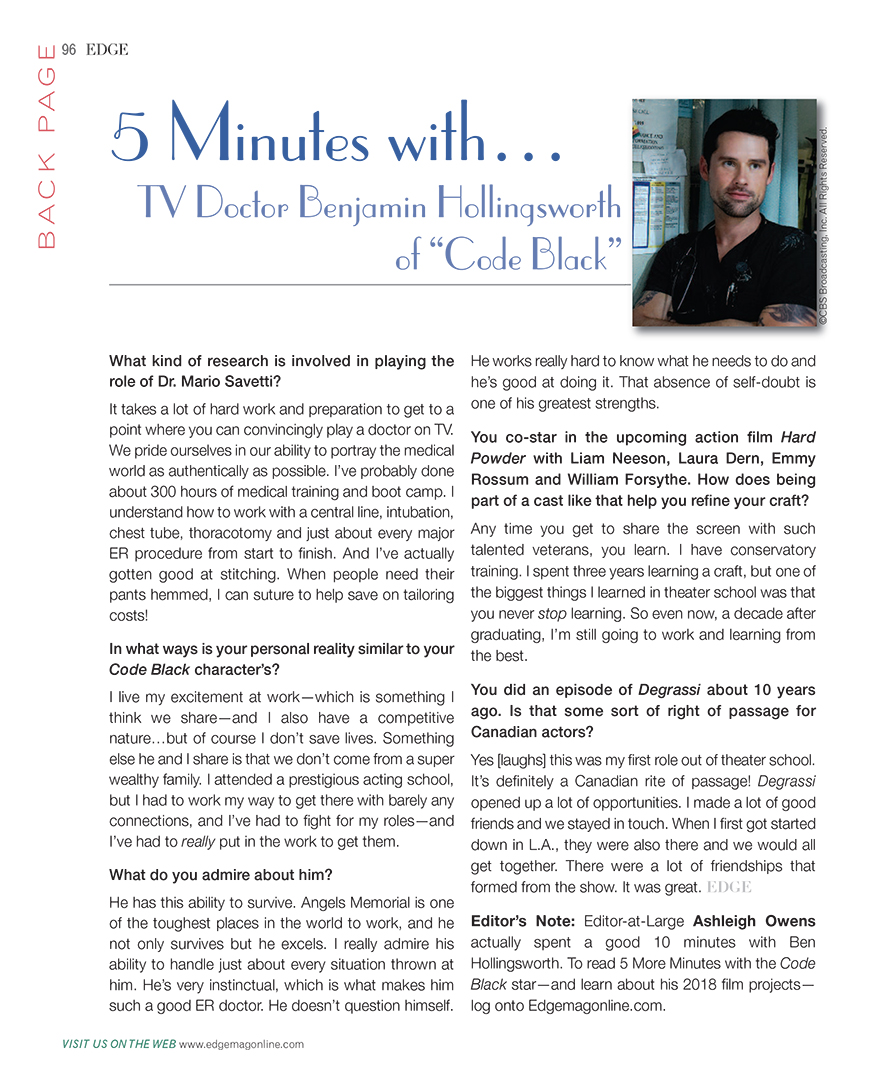 What kind of research is involved in playing the role of Dr. Mario Savetti? It takes a lot of hard work and preparation to get to a point where you can convincingly play a doctor on TV. We pride ourselves in our ability to portray the medical world as authentically as possible. I’ve probably done about 300 hours of medical training and boot camp. I understand how to work with a central line, intubation, chest tube, thoracotomy and just about every major ER procedure from start to finish. And I’ve actually gotten good at stitching. When people need their pants hemmed, I can suture to help save on tailoring costs!

In what ways is your personal reality similar to your Code Black character’s?

I live my excitement at work—which is something I think we share—and I also have a competitive nature…but, of course, I don’t save lives. Something else he and I share is that we don’t come from a super-wealthy family. I attended a prestigious acting school, but I had to work my way to get there with barely any connections, and I’ve had to fight for my roles—and I’ve had to really put in the work to get them.

What do you admire about him?

He has this ability to survive. Angels Memorial is one of the toughest places in the world to work, and he not only survives but he excels. I really admire his ability to handle just about every situation thrown at him. He’s very instinctual, which is what makes him such a good ER doctor. He doesn’t question himself. He works really hard to know what he needs to do and he’s good at doing it. That absence of self-doubt is one of his greatest strengths. You co-star in the upcoming action film Hard Powder with Liam Neeson, Laura Dern, Emmy Rossum and William Forsythe.

How does being part of a cast like that help you refine your craft?

Any time you get to share the screen with such talented veterans, you learn. I have conservatory training. I spent three years learning a craft, but one of the biggest things I learned in theater school was that you never stop learning. So even now, a decade after graduating, I’m still going to work and learning from the best.

You did an episode of Degrassi about 10 years ago. Is that some sort of right of passage for Canadian actors?

Yes [laughs] this was my first role out of theater school. It’s definitely a Canadian rite of passage! Degrassi opened up a lot of opportunities. I made a lot of good friends and we stayed in touch. When I first got started down in L.A., they were also there and we would all get together. There were a lot of friendships that formed from the show. It was great.