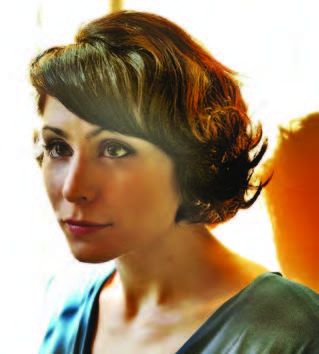 Was there always music playing in your house?

There was. I was raised on music. My parents loved it. My brother, Adam, turned out to be the musician in the family. I was more interested in theater. My music training really didn’t begin until I was in college.

What was the turning point?

I was in a musical at Brookdale Community College, near our home in Colts Neck. Three of the musicians in the pit were jazz musicians who taught courses there. I’d always loved jazz and, as I got to know them and learned about what they did, we discovered we had a mutual afﬁnity for the genre.

So that was your start as a jazz singer?

It was. These guys—Joe Accurso [piano], Gary Mazzaroppi [bass] and Doug Clarke [guitar]— took me under their wing and began bringing me out on gigs. Joe really helped me put my repertoire together and, through these guys, I got to meet and perform with jazz greats like Frank Vignola and Bucky Pizzarelli.” This was almost 10 years ago. They still play as a trio, and I still sing with them. They’re called Art Deco.

In 2015, you were selected by WNYC’s Jonathan Schwartz as one of the performers at that amazing Sinatra 100 event in New York.

Yes, I sang “Love Is Here to Stay” and “When Your Lover Has Gone.” I also did a medley of “I Got It Bad” and “If I Had You.” I enjoyed the challenge of blending those two songs, which express the unique dichotomy of love. One’s about being in love with someone who’s bad for you, while the other says I could do anything if I had you in my life. I tend to lean toward torch songs.

Do you have a favorite Sinatra song?

Wow, that’s difﬁcult. One that stands out to me as being simple but poignant is “Guess I’ll Hang My Tears Out to Dry.” Early Sinatra is my preference, and that one is just beautiful.

You perform regularly at venues that are familiar to EDGE readers, including 100 Steps in Cranford and 16 Prospect in Westﬁeld. What’s the difference between singing at smaller places as opposed to, say, Symphony Space in New York?

The thing I love about any live performance is the energy of the room. It’s all about the symbiotic audience-performer relationship. There’s an adrenaline rush you can ride in front of a big crowd, whereas the smaller spaces are more like an intimate conversation. It’s a rush, but in a different way.

Editor’s Note: To view and listen to Audra Mariel’s recent performances—including her Sinatra 100 medley—follow the links on her web site audramariel.com. For her most up-to-the-minute appearance schedule, visit her Facebook page. Audra’s self-titled album is available as a download on iTunes.