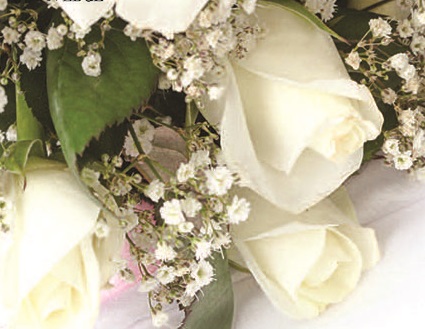 With This Allen Wrench, I Thee Wed -

Everything you wanted to know about New Jersey couples…and a few things you didn’t.

In 2005, single mom Shirley Stewart and her teenage daughter, Jashirele, were shopping at the IKEA in Elizabeth. Jashirele pointed out Rashid Smith, who was shopping alone nearby. The two ladies followed good-looking Rashid for nearly an hour, trying to ﬁgure out from his cart contents whether or not he was married. Finally, in the frame department, Jashirele just went up and asked him. No, said Rashid. He was not. 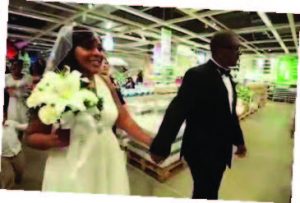 Their story is not unusual. New Jersey is an endless source of great meet-cute yarns, off-the-charts weddings and tales of quirky couples. In these pages we present a sampling of fun facts…along with the good, the bad and the ugly. 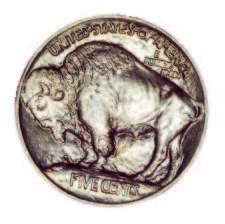 A Bargain at Twice the Price

Earlier this spring, Vineland couple Clara and Julio Sbrana celebrated their 76th wedding anniversary. Both turned 100 recently. Last year, they renewed their wedding vows on their 75th anniversary. Julio had his ﬁrst dance with Clara Vai at a bar on Dante Avenue the year after Prohibition was repealed. She charged him a nickel.

Something Less Than a Bargain

At roughly $54,000, our area—speciﬁcally, Central and Northern New Jersey—is the third-most expensive place to get married in the United States. Manhattan ranks #1 with an average cost of $76,000 and Long Island is second at$55,000. Westchester and the Outer Boroughs came in fourth and sixth, respectively, with Chicago coming in ﬁfth at $51,000. Rounding out the Top 10 are Philadelphia, Rhode Island, the San Francisco Bay Area and South Jersey ($39,000). 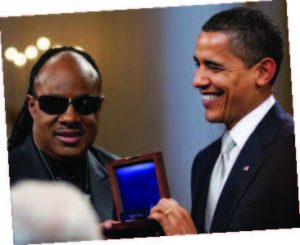 Can you have a wedding reception without at least one Stevie Wonder song? For her 2011 wedding at the Rockleigh Country Club in Bergen County, Aisha Morris asked the Charles St. Paul Band to play Isn’t She Lovely. The song had a particular special meaning to Aisha, whose father, Steveland Morris (aka Stevie Wonder) was in attendance. What’s more, when he recorded Isn’t She Lovely in 1976, he needed the sound of an infant crying at the beginning of the song. The baby he recorded was Aisha. 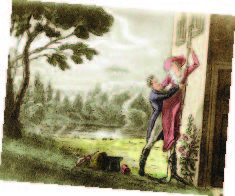 Put a Ring On It

Liberty Hall, on the campus of current-day Kean University, hosted one of the state’s ﬁrst A-List weddings in the spring of 1774. John Jay, the future Governor of New York and Supreme Court Chief Justice, married Sarah Livingston, daughter of New Jersey Governor William Livingston. Legend has it that the same home was the site, some two decades later, of an A-List elopement. William Henry Harrison, a young Army ofﬁcer, spirited Anna Symmes out of a parlor window very much against the wishes of his future father-in-law, the honorable John Symmes. Judge Symmes changed his tune after Harrison—a protégé of Mad Anthony Wayne—achieved some notoriety on the battleﬁeld. Harrison eventually was elected 9th President of the United States. 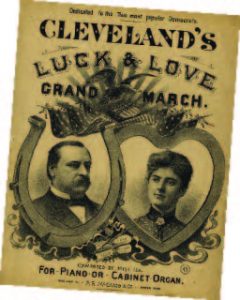 The modest clapboard house where President Grover Cleveland was born in 1837 still stands on Bloomﬁeld Ave. in Caldwell. Two marriage-related artifacts are on display there: The 1886 certiﬁcate commemorating the union of Cleveland and Frances Folsom and a slice of their wedding cake. It is housed in a Tiffany & Co. presentation box and food historians believed it to be the oldest piece of cake in America.

The Clevelands were married while Grover was serving his ﬁrst term in the White House. Frances was the daughter of his late law partner; he had become her legal guardian in 1876, when Frances’s father died and she was only 11. Many assumed that Cleveland would marry Frances’s mother, but instead he wed Frances as soon as she turned 21.

Visitors can’t help but notice that a piece of the Cleveland wedding cake appears to be missing. Legend has it that a Cub Scout nibbled it off on a dare sometime in the 1950s.

Husband-and-wife teams own and operate nearly 4 million businesses in America. The ones that succeed bring the same commitment and uniﬁed vision to their business as they do to their marriage. That was the plan for Angie’s Bridgeton Grill, one of a handful of landmark diners manufactured by the Paterson Vehicle Company. Andy and Brenda Webster, a Cedarville couple, bought the popular 44-seat eatery and went to work serving up homemade fare to the breakfast and lunch crowd.

In the fall of 2012, a ﬁre ripped through the kitchen, destroying Angie’s, which was a Bridgeton landmark. “I don’t know what to say,” a distraught Andy told reporters the next morning. “The police came to my house last night and woke me up.”

A couple of years later Andy and his wife had plenty to say. They admitted in court to having started the ﬁre. Their business had hit a rough patch and the insurance money was just too tempting. Late one night they doused a pile of newspapers and menus with a can of gasoline and lit it.

The gas fumes ignited and burned Angie, so it didn’t take a genius to ﬁgure out who had set the blaze. They were scheduled to be sentenced in May 2015. 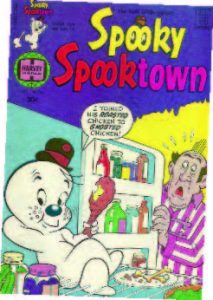 In 2012, Josue Chinchilla and his ﬁancée, Michele Callan, sued their Toms River landlord for $2,250 after ﬂeeing from their rental home a week after moving in. During that time, they claimed, doors creaked and slammed, clothing ﬂew out of closets and strange noises came out of the ﬂoor vents.

The ranch house, located on the corner of Terrace and Lowell Avenues, was apparently haunted. The couple even went so far as to hire a paranormal investigative company, which found evidence of “an active or intelligent haunting.”

The landlord, Dr. Richard Lopez, countersued Michele and Josue for breaking their lease. According to Lopez, the only thing that spooked the couple was paying the rent.

Brick Township has produced some pretty impressive young people over the years, including hockey star Jim Dowd, baseball legend Hank Borowy and actress Kirsten Dunst. Among the most memorable is Ed Mallue, a two-time Ocean County Soccer Player of the Year who earned All-America honors at the U.S. Military Academy, served in Afghanistan and rose to the rank of captain.

The love of Ed Mallue’s life, Natalie Heimel, is also an Army captain. Both are stationed in Hawaii and, last December, they scheduled their wedding on the 16th hole of the Kaneohe Klipper Golf Course. At least, that was the plan.

A certain Commander-in-Chief was also in Hawaii, with plans to play a round on the same golf course at the same time. Ed and Natalie were forced by Secret Service agents to move their wedding at the last minute so President Obama could play through.

He called them later to apologize. “I feel terrible, nobody told us,” he said. “We would have skipped the 16th hole.”

The news wasn’t all bad. The ceremony and reception were moved to the lawn of their commanding ofﬁcer—which was actually a nicer location.