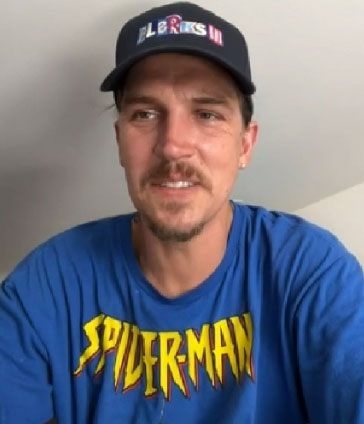 Kevin Smith said that you’ve inspired him in some ways…do you feel you have had a positive effect on his movies and other work?

It’s weird to talk about myself and be like Well, yes, I did this for him, whatever. But I’ve heard him saying that out of his own mouth. He saw something in me, he thought I was funny and he wondered if other people would think I was funny. So he put me out there to see. He says that along the way, I have always been a Yes! person…if he has an idea, I’m never like, “Don’t do that, you’re gonna fail buddy.” I’m like, “Yes!, let’s try it! What can I do to help?” Kevin definitely has great ideas and is super-talented and smart. It’s been a really good team-up.

In 2019, you made your own movie, Madness in the Method. When did you decide you wanted to direct?

It was on Clerks II. Kevin was up in his editing suite and everyone else was ready for the first shot. They were like, “Come on, let’s get going, we’re gonna be late.” Kevin was in the zone and was like, “One more minute.” So I said, “Kevin, let me direct a shot.” I was joking around, but he said, “Go for it.” It was an easy shot, but I got to say Action! and Do it again. I don’t know, man, just right there, I was like, Wow, this is awesome. I’d really love to do this for a full movie.

How did you get Stan Lee to do a cameo?

We worked together on Mallrats, we did an Audi commercial, and I saw him at comic conventions all the time. But it’s not like I had his phone number and talked to him or anything. I did have his assistant’s number, so I called him up and was like, “Bro, I know this is a big ask, but is there any way you think that Stan would be able to come down and we can get him in and out in like two hours at the most?” He called back and said, “Stan told me you have to be done in two hours because he has to go home and eat dinner with his wife. He never misses dinner with his wife.” That was so sweet to me.

At what point were you able to pursue a movie career full-time?

I would say in 2001, with Jay and Silent Bob Strike Back. From Clerks to Dogma, I worked construction, roofing, and delivering pizza. After Clerks, I went back to my normal job, roofing, for a while. And then when we went to do Mallrats, I quit roofing because I was gonna be gone for a couple months and the guy couldn’t hold my job. When I got back from Mallrats, I went to Vancouver and did the movie Drawing Flies. Then I came back and I started doing construction with my buddy. Another buddy owned a pizza place, so he gave me a job delivering pizza. I was delivering pizza and doing construction, like tiling and bathrooms and stuff. After we did Chasing Amy I still did that. It really wasn’t until after Dogma, because that’s when I came to California.

Editor’s Note: This Q&A was done by Andrew Talcott and was edited for length. To read Andrew’s full interview with Jay—and find out how Jay overcame his stage fright—read below!

When did Clerks III begin shooting?

I think it started on Kevin’s birthday last year and we were in Jersey for almost two months. It was awesome, because my wife produces the movies. She’s produced Yoga Hosers, Jay and Silent Bob Reboot and now Clerks III. She runs all the touring and the Convenience Tour and all this stuff with Lionsgate. So it’s great. She came back to Jersey with me and was working producer, and then my daughter came out of course, and my mother-in-law and so the four of us were staying in an Airbnb. It was really cool to be back in Jersey. I have family still in Highlands and we also have our comic-book store in Red Bank.

How did you and your wife meet?

She was going to college at UCLA and her plan was to take a year off and then go to law school. During that year, Kevin was like, Oh my gosh, I need help with this. Can you help me do this? She said sure and did it really fast. Then he kept asking her to help out with other things: Can you book my and Jay’s travel? Can you talk to the venue and see if they can make sure that we have a hotel room? She just did everything really fast and Kevin was like, Wow, I need you to work for me. After like three or four months, Kevin’s like, Hey, let’s open a company together called SmodCo. So they opened the company.  But yeah, her plan was never to be at all in any type of entertainment. She wanted to be a lawyer.

When you first shot Clerks, you were nervous about being in front of the camera. How did you overcome your shyness?

I just had to step it up. During Clerks, I was able to get away with needing more time or privacy to feel comfortable. But when Kevin said to me, “Hey, we’re gonna do Mallrats, it’s going to be a studio movie and I wrote a character for you—Jay and Bob are in this movie—but you can’t be like you were on Clerks.  Not only can you not do that because, it’s a studio movie, it’s not gonna be just ten of us working on set, like a bunch of friends, putting duct tape around a hockey stick to hold up as a boom mic. There’s gonna be a first AD, second AD, there’s gonna be like forty people on set at all times. You gotta get over this.”

You know the next thing I had to get over? Kevin used to do An Evening with Kevin Smith and he would bring me on stage in front of like 1,500 people and say, “Welcome Jason Mewes!” It was so awesome. Everyone would scream and it was such a cool thing that I loved to do. But then, when I’d get out there, it was like, I was on camera in Clerks again! Someone would go up to the mic and say, “This question’s for Jason. Hey Jason, what was it like filming Clerks for the first time?” And I’d be like… It was good. Kevin afterwards would be like, “Bro, you gotta learn to answer better. Like answer the question, but give a little bit of a story.” It took years to get over that. Thankfully now, you know, it’s been long enough. I do my own A-Mewesing Stories. It’s interesting to go back and think it took four or five movies for me to get comfortable in front of the camera where I didn’t get nervous anymore. And it took me being on stage at least twenty times in front of an audience before I started feeling comfy, answering a question with a little bit of a story and not just being like, Yes. No. It was great.