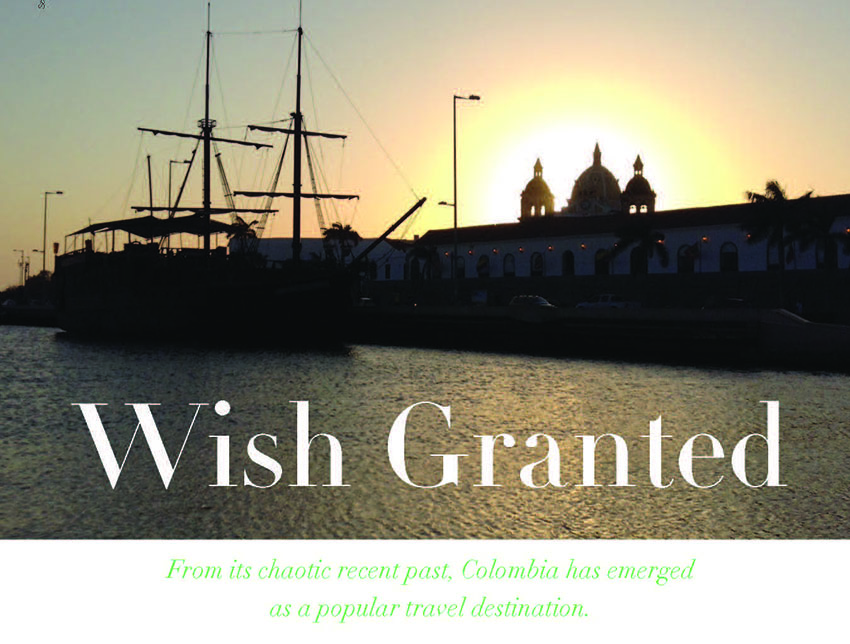 From its chaotic recent past, Colombia has emerged as a popular travel destination.

A line of Colombians clasping bouquets of carnations, roses and lilies forms in the quiet of the nearly deserted Central Cemetery in Bogota. Not far from the alley of the lonely tombs of Colombia’s presidents sits a polished bronze statue, a somewhat less-artistic version of Rodin’s Thinker, ﬂanked by a serious middle aged man in a crisp tailored suit whispering intently into the statue’s ear. Seated near the statue sits a robed “priest” (I am told he is not ordained) who has set up a card table and reads a Mass, for which he is paid by supplicants. He rings a bell to indicate the man’s time is up. 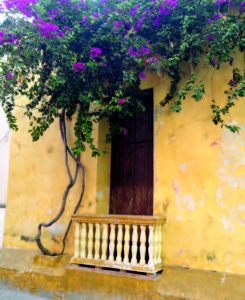 Scores of bouquets have been left around the statue, covering the grave of the long-dead man, which is said to have been endowed with the power to grant wishes. There are many stories of his posthumous prowess in fulﬁlling desires, bestowing love, healing the sick and easing ﬁnancial or emotional distress. One young man tells me of his frustrating job search. He made a pilgrimage to the statue and petitioned for help. Right after making this request, a sudden breeze arose around the gravesite, lifting leaves and ﬂowers into a mini swirl. He took this as a sign that his wish had been heard. Only two days later, he received an overseas call with a job offer from an international ﬁrm in Miami.

Such is the magical realism you might ﬁnd in a Gabriel Garcia Marquez novel. In fact, this is the grave of Leo Kopp, my great-grandmother Ida’s brother. Leo Kopp was a German Jewish agnostic, who immigrated to Colombia and founded the Bavarian Brewery—now South America’s second largest brewery—in the late 19th century.

This is my ﬁrst trip to Colombia. For ﬁve generations, my family in North and South America has more than kept in touch. We have become good friends.  Our friendship was forged in the 1990s when Colombia was plagued with violence. Murders and kidnapping—from both guerrilla and drug wars—convinced my cousins to move their children, who were my kids’ ages, up to New York. We spent many fun, multi-generational holiday dinners together and, since they returned to a safer, saner Colombia, we continue the family tradition of keeping in touch. 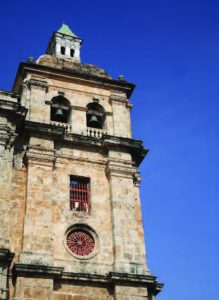 If you are drawn to Caribbean beaches and snorkeling, you can take a boat to the islands (Islas del Rosario), where one can either spend the day or the night. The Santa Clara Hotel has a sister hotel in the islands, the Hotel Majagua. For travelers who prefer smaller boutique hotels, villas or B&B’s, Cartagena offers quite a few, including Tcherassi Hotel, Hotel Casa del Arzobispado, Hotel LM, Ananda Hotel Boutique and Hotel Casa San Agustin. It’s also a good idea to make dinner reservations at some of the better restaurants, including La Vitrola, Don Juan, Harry Sasson Bar at the Hotel Santa Teresa, La Vera, Juan del Mar, Cafe del Santisimo, 8-18, Alma, Café San Pedro, Restaurante Club de Pesca and Fuerte de San Sebastián del Pastelillo.

For years, Colombia was off the tourism radar. Recently, however, travel stories have been cropping up in The New York Times, The Wall Street Journal and The London Times. Even Bergdorf Goodman’s 2015 spring fashion magazine ran a two-page story on the picturesque coastal city of Cartagena. Though still a relatively well-kept secret, Colombia is fast becoming a go-to destination.

As well it should be. Colombia is a country rich in history, geography and diversity. From the haciendas of the coffee region, to the coast that stretches from the Paciﬁc to the Caribbean Sea and Atlantic coast, from the Amazon River jungle, to the Andean Mountains, Colombia offers many climates and experiences within an hour’s plane ﬂight of the capital city of Bogota.

Cartagena, a fortressed town on the Caribbean, is the country’s most tourist-friendly.  It offers an array of large resorts, boutique hotels and hostels within the old town, which has been designated a World Heritage site by UNESCO. With its bright pink, ochre, salmon and sky-blue painted villas, old town Cartagena is “Cuba Lite,” without visa complications. 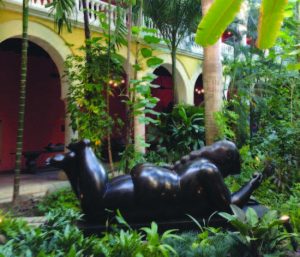 On our most recent visit, we stayed at the Soﬁtel Santa Clara, one of the two best luxury hotels, the other being Hotel Santa Teresa. Built within the thick historic walls of the 1621 Franciscan convent of the nuns of Santa Clara, the Hotel Santa Clara successfully blends traces of its past with modern amenities. Alongside the original convent chapel, wells, crypt and confessional booths is a lush courtyard punctuated with a reclining nude holding an apple by sculptor Fernando Bortero—a plus-size Eve in paradise. In contrast to the building’s former monastic life, the Santa Clara offers a spa, as well as an Olympic-sized pool with attendants happy to serve you snacks and fruit drinks. You’ll need to plan your trip early. When we called for a reservation a month in advance, the town was booked—with multiple destination weddings, conferences and a golf tournament. In addition to being a tropical getaway, Cartagena plays host to music, ﬁlm and literary festivals in the winter months. By some stroke of luck (thank you, Leo Kopp?) we snagged the last accommodation at the 123-room hotel.

Formerly a strategic harbor—where the galleons of the Spanish conquistadors were loaded with pillaged treasures of gold, silver and gems to be shipped in heavily armed convoys back to Spain—Cartagena has seen quite a bit of action over the centuries. Under Spanish colonial rule, it functioned as a slave-trade center and endured catastrophic ﬁres, pirate attacks and battles for independence. It witnessed a civil war, decades of political strife and an economic downturn at the end of the 20th century. And speaking of action, you may recall that Cartagena was in the headlines for some Secret Service indiscretions prior to a conference visit from President Obama, and also for an infamous selﬁe that featured a snoozing Justin Bieber.

As Monty Python once said, nobody expects the Spanish Inquisition. And it’s true. We were surprised to learn that for much of the 17th century, friendly Cartagena was one of three South American seats of the Spanish Inquisition. Here, tribunals condemned heretics and practitioners of witchcraft. A visit to the building known as Palacio de la Inquisicion conﬁrms this fact. It houses a museum of the Inquisition’s relics, ranging from a device that determines if the accused was a witch (innocent or not, you die either way) along with assorted instruments of torture. 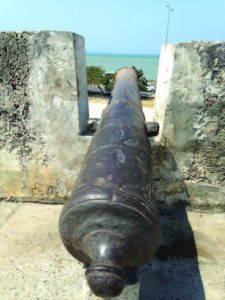 Whatever the challenge, like a phoenix, Cartagena has risen from rubble over and over. Ten years ago, for example, the old section was a poverty-stricken barrio. Today, you can safely walk the circumference of the old city and gaze out on the bay from the thick fortiﬁcation wall, a defense built after Sir Francis Drake plundered Cartagena and held it for ransom in 1568. Within the ramparts, you will ﬁnd brightly painted villas covered in bougainvillea which line narrow streets of fruit-vending carts, stores selling Colombian crafts, and restaurants offering fresh-caught ﬁsh carpaccio and ceviche, with the sound of Cuban salsa drifting through the air. Cartagena is punctuated with lovely tree-shaded plazas, including the Plaza Santo Domingo, with a reclining plump nude Botero bronze.

In stark contrast to the sleepy Caribbean resort town of Cartagena is Bogota, an easy 70-minute ﬂight away. A teeming metropolis of 7 million people situated 8,660 feet above sea level, Bogota’s climate is a temperate 40 to 70 degrees. This Andean city has emerged from decades of guerrilla war, drug trafﬁcking and kidnappings to become a vibrant cosmopolitan center. A sign of the times is that many international hotel chains are investing in Bogota. The Four Seasons Hotel is renovating two additional properties there. 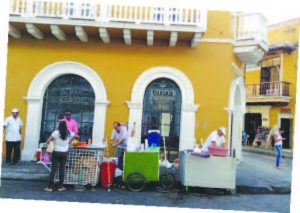 Yes, peace has come to Colombia. No more need for bulletproof cars or bodyguards. That’s not to say that you can totally let down your guard. While Cartagena is safe even at night in many sections, guidebooks still caution visitors to Bogota to leave their passports in the hotel safe, not to wear valuable jewelry or ﬂaunt expensive cameras, and to beware of pickpockets. Of course, the same warning could also apply to the New York City subways. While visiting high Masses in churches in La Candelaria, a woman approached my cousin suggesting she turn the stone of her small diamond ring around. Random taxis are also to be avoided—your hotel can give you an app to contact a reliable car service. 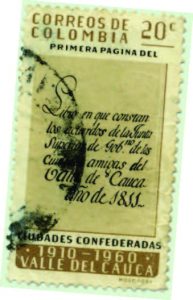 SO WHAT EXACTLY HAPPENED?

The changes in Colombia over the last dozen years have been nothing short of astonishing. The peace process initiated by President Alvaro Uribe (2002–2012) led to the demobilization of guerilla and paramilitary groups, which in turn gave the government control of the nation’s drug-producing regions. This further reduced the level of danger and violence. About a year ago, the Colombian government met in Cuba with representatives of the rebel group FARC to hammer out an agreement to keep the peace permanently. The country has a robust economy, with an oil industry that cranks out a million barrels a day. In the last few years, nearly a million Colombians have been lifted out of poverty, and economic reforms have been put in place that aim to lift millions more.

Home to many libraries, museums and universities, Bogota is known as the “Athens of South America.” Many of the ﬁner institutions are housed in the Centro, as well as Bogota’s old section, La Candelaria, which dates back to the 16th century and features the ornate, colonial-era cathedral and churches that border Plaza de Bolivar. Not to be missed in La Candelaria are two world-class museums. The Museo del Oro artistically displays over 55,000 pieces of gold from the pre-Colombian era, while Museo Botero exhibits Botero’s signature rotund people, fruit, animals and birds, as well as the sculptor’s ﬁrst-class collection of impressionist and modern art, including works by Monet, Matisse, Degas, Picasso, Balthus, Klimt, Moore and Calder. Besides being a quirky, proliﬁc artist, Fernando Botero had a terriﬁc eye for other artists’ work. A perfect conclusion to a day in La Candelaria is dinner on the rooftop patio of the Hotel de la Opera, which overlooks the tops of churches and the Palace of Justice.

On the recommendation of my cousins, we stayed at the Soﬁtel Bogota Victoria Regia on a street with very good restaurants. We particularly enjoyed Primi, an Italian restaurant located across the street from the hotel.

The food scene in Bogota is growing rapidly. We liked the light crust pizzas at Julia’s, a popular hole-in-the-wall pizzeria, the grilled meat and Latin beat of Andres, and the Peruvian-Chinese fare at Maman Tusan’s in Usaquen, a picturesque old village within the northern border of the city.

Bogota has several high-end shopping malls. The top (3rd) ﬂoor of El Retiro shopping center has a Colombian food court called La Plaza de Andres with reasonably priced meals. If you’re looking for pre-Colombian-inspired jewelry, L.A. Cano in the Centro Andino shopping mall offers some affordable and attractive earrings and necklaces. Or if you are looking for indigenous crafts, Artesanías de Colombia is a reliable resource.

Back at the Central Cemetery on my last day in Colombia, it’s ﬁnally my turn to leave a bouquet of roses at Leo Kopp’s statue. Together with my cousin, we step up on either side and each whisper in his ear. That the strong family Colombian connection lives on through future generations, I’m sure Leo and Ida would be very, very happy.