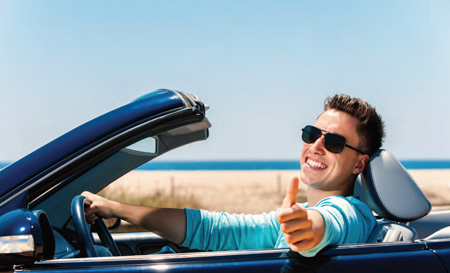 New Jersey played a major role in the evolution of the car industry.

Between 1900 and 1950, more than four dozen makes of automobiles were produced in New Jersey. During that time, the industry underwent enormous changes and car manufacturing in the Garden State changed with it. At the height of the automotive boom, car companies employed more than 15,000 people in the state. They assembled vehicles and made many of their components. Those vehicles literally went all over the world.

Depending on how you define “automobile,” the beginning of New Jersey’s history in car manufacturing could date all the way back to 1868. In that year, Oberlin Smith (right) of the Ferracute Machine Company in Bridgeton unveiled a steam-driven horseless carriage. More than 100 curious Bridgetonites gathered to watch Smith demonstrate his new machine. Unfortunately, the control lever came off in his hand and the vehicle careened all over Main Street, scattering the crowd. Smith built another horseless carriage six years later. This time it crashed into a pond.

The Garden State got back into the automotive race three decades later. Thomas Edison’s work in the area of power storage in the 1890s resulted in a car battery that could run a buggy 100 miles. Edison (above right, with Henry Ford) entered into negotiations with Studebaker to co-produce cars in 1902, but the deal fell through and the company began marketing gas-powered vehicles instead. Edison started his own company in Newark to make electric delivery wagons (aka trucks), but production was sporadic because it was reliant on the number of finished batteries that could be delivered from his West Orange lab, and that proved difficult to forecast. Edison sold the company in 1911 having turned out 1,750 vehicles.

Edison’s greatest contribution to automotive history may actually have been a conversation he had with a struggling young carmaker in Detroit. Recognizing the inherent limitations of battery-powered automobiles, Edison encouraged Henry Ford to keep working on his gas-powered, four-cylinder engine. Ford later recalled that, “No man up to that time had ever given me any encouragement.”

New Jersey’s dual status as a deep-water shipping port and the eastern terminus for the railroads made it a natural place for car manufacturing. Its lenient corporate tax structure in the early 1900s only added to its appeal. In the first decade of the 20th century, New Jersey saw a number of carmakers come and go, including Prescott Auto in Passaic, Walter Automobile in Trenton, Standard Motor in Bayonne, Vandewater & Co. in Elizabeth and Canda in Carteret. Motorcars were way out of reach of most Americans during this era, so these start-ups were fighting over shares in a very narrow market. A few carmakers did manage to survive by targeting the ultra high-end market: Mercer in Trenton, Crane in Bayonne and Simplex in New Brunswick. Mercers (named after their home, Mercer County) were on the road well into the 1920s, but all three companies eventually went under.

For a time, the high-end Duesenberg was built in a state-of-the-art facility in Elizabeth. The plant, which employed more than 1,000 workers, made the first car with a Chrysler nameplate and later produced Durants. Unfortunately the company was out of business by the end of the 1920s.

The ’20s did see a significant increase in car ownership among Americans. The economy was booming and efficiencies in production had lowered the pricing on many models, most famously Ford’s Model T. Model T’s were produced in great numbers in Ford’s two-story Kearny plant, which opened near the end of World War I and employed upwards of 8,000 workers. They churned out hundreds of cars daily. Kearny was strictly an assembly plant; nothing was “made” there. Components made elsewhere (mostly the Midwest) were shipped to New Jersey, where workers got them rolling off the line and onto trains and delivery barges. Automotive assembly, in fact, is where the Garden State ultimately made its greatest mark in the American car story.

The ubiquitous Model T was assembled in Kearny until the late-1920s, when the Model A (right) came online. Ford sold Kearny to Western Electric and opened a 35-acre plant in Edgewater (below), designed by Albert Kahn. It was famous as the first building in the U.S. to use structural “mushroom” columns. At its height, the 1,500-foot Edgewater assembly line could roll a finished Model A onto a transport barge at the end of the pier in 48 minutes, start to finish. In 1932, the Model B went into production, followed by the Ford Coupe in 1936, and the Deluxe Coupe Convertible and Ford Mercury in 1938. During World War II, the Edgewater plant was switched over to military production and contributed more than 100,000 Jeeps and light trucks to the war effort—many of which were delivered to the Soviet Army in 1943 and 1944.

During the 1940s and early 1950s, the Edgewater plant was the area’s largest employer, providing thousands of jobs. In 1955, the factory was sold and production moved north, to a plant in Mahwah. Mahwah operated until 1980 and was the largest auto plant in the country in the mid-1950s. At that time, Ford also had a plant in Metuchen, which made Lincoln and Mercury models. The plant later built some of the company’s most popular vehicles, including Mustangs and Rangers. The infamous Pinto was made in Metuchen, too.

General Motors, which incorporated in New Jersey in 1908, did not become a major player in the Garden State until the 1920s. The company owned a large tract of land in Bloomfield, which it used to stage overseas deliveries of its cars. However, GM did not build its first assembly plant in New Jersey until 1937, when it opened an enormous factory in Linden that produced Buicks, Oldsmobiles and Pontiacs. One year later, GM opened a plant in Ewing Township, just north of Trenton, which made parts for the Linden plant. Among New Jersey’s many “famous firsts” is the debut of an industrial robot in North America. That happened in 1961 at the GM plant in Ewing.

During World War II, the Ewing factory was switched over to the production of torpedo bombers. Linden, which was located next to a commercial airport, also contributed to the war effort, turning out fighter planes for the military, including the legendary Wildcat (left). Linden made cars until 2005, focusing on SUVs beginning in the 1990s.

Today, the automotive industry is alive and well in New Jersey, but cars are no longer made here. We are voracious consumers—a close second to California in terms of vehicles per capita. There are approximately four million cars registered in the state along with another two-and-a-half million other vehicles, mostly commercial. There are slightly more than seven million New Jersey residents of driving age, making our average a shade under one vehicle per driver.

Decades before the big auto plant opened in Elizabeth, the city laid claim to a couple of important developments in automotive technology. In 1889, J.F. and T.E. Connolly built a gas-powered engine to run streetcars. It didn’t occur to them to attach it to a buggy; six years later, the Duryea brothers of Springfield, MA made this leap and opened the first automobile company in America. Also in 1889, the Riker Electric Vehicle Company was founded in Elizabeth by Andrew Riker, who had been tinkering with electrically powered vehicles since 1884. Rikers won several important road and track races in the 1890s, before the company was sold in 1901.