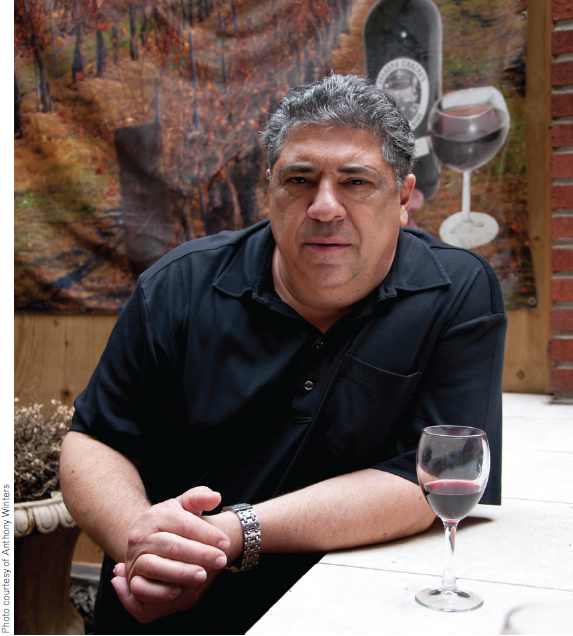 Vincent Pastore is a hard man to pin down. His interests are many, his gears constantly turning, his attention often divided. Tracey Smith chased him all summer for this interview, hoping to capture the essence of a show business Renaissance Man. To her delight, Pastore turned out to be that Renaissance Man in every conceivable way. Indeed, one can easily imagine him perched upon the throne of a 16th century city-state…or transforming a block of marble into a masterpiece for a wealthy patron…or dodging the business end of an enemy lance at the vanguard of an attacking army. From his tour de force as the conflicted criminal underboss Salvatore “Big Pussy” Bonpinsiero on The Sopranos to his unforgettable stints on reality TV, Pastore has become one of the most cherished characters—and character actors—of our time.

EDGE: The bad guys on The Sopranos could be warm and vulnerable and then suddenly turn and become cold, heartless killers. Your character had the added dimension of being deeply conflicted about being an informant. Did you enjoy that extra challenge?

VP: I did. David Chase wrote that role for an actor who could play a tough guy who also could be sensitive. I saw Big Pussy as a man with a big heart, and that was my choice of how I played that role. In that scene where he is crying in the bathroom at Anthony Jr.’s confirmation, you knew it was not just because he was a rat—he was betraying his friends, which was even harder to deal with.

EDGE: Was Big Pussy the most subtly textured character you have played in your career?

VP: Hmm, that’s a tough question. Probably. Going through so much mental turmoil over such a long period of time, dealing with the tension of if and when he was ever going to get caught by his friends for being an informant. I can tell you that it stayed with me as an actor, over five days a week of taping. It was rather tough.

EDGE: In addition to your acting, you are involved with a lot of plays.

VP: I try to produce three plays a year. It really enables people to see the actors work. I started doing this four years ago. It’s enabled me to continue working with several actors from The Sopranos, including Maureen Van Zandt, Nicholas Giangiulio, Joe Lisi, Garry Pastore, Tony Rossi, Anthony Ribustello and Janet Sarno. I don’t make a lot of money because I own the theater company, but we’ve had a pretty good run.

EDGE: Is that a different kind of stressful?

VP: Yes. The behind-the-scenes aspects of theater can be very stressful. I recently co-produced the revival of Lamp Post Reunion by Hoboken playwright Louis LaRusso. Danny Aiello played the lead character. There were frequent worries about who was ready or on cue. Plus the mood of the main character was dark.

EDGE: Your television and film roles are typically big, rich characters. How much of what we see on screen is you, and how much of that is you slipping into character?

VP: That depends on the role. I am currently being filmed as a mayor in Surviving Family and I’m not acting like the typical wiseguy that I’ve played in the past, like Angelo Ruggiero from Gotti or Big Pussy from The Sopranos. In Surviving Family I am acting, whereas those other characters are closer to who I am. I am Angelo. I am Big Pussy. And trust me, playing a mayor is a whole lot different than playing a wiseguy. There’s no comparison.

EDGE: What about the over-the-top Vincent Pastore we’ve sometimes seen on reality television shows, like Famous Food, The Apprentice and Celebrity Fit Club?

VP: What reality producers try to do is put me up against certain situations to bring out the best or worst in me, which is what the reality television mission is, in all actuality. They place you in a bad improvisation scene with someone you genuinely don’t like, and you’re forced to work with them. They want drama, emotion and conflict. Sometimes my temper shows, but I believe that as long as you don’t take it home to your family, and keep it out of your personal life, it’s okay.

EDGE: You pointed out in a previous issue of this magazine that not everyone can play a wiseguy. By the same token, no two wiseguys are alike. Big Pussy was a fictional character. But the part you played in Gotti was not. What was the challenge in interpreting that role?

VP: Angelo Ruggiero was a real person, so it was key to know the relationship between the two men. John and Angelo had a priceless bond. Armand Assante, who played Gotti, told me that the song The Wind Beneath My Wings reminded him of Ruggiero. He was always right behind John Gotti. He was loyal, and he never ratted. So you have to do the research, know the character. It’s true—not everyone can do this, not everybody can play a wiseguy.

EDGE: You mentioned that Angelo Ruggiero and Big Pussy are “you.” How often do you reach back and draw on your experiences outside the theater, to the real-life characters you’ve known, when you play a part? 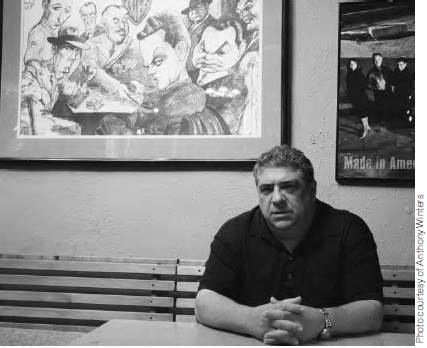 VP: A lot of people think I grew up with those kinds of people. The truth is that I grew up in a pure Italian-American home. Tradition. We lived in New Rochelle in an Italian neighborhood. I can still smell the pizza! Roller skating every Friday night at the Boys Club. Great memories. We saw bookies and loan sharks. But to play these roles you don’t rely on memories. You use your own personality and come up with a great character. And for the record, I never knew any rats.

EDGE: Your family lived above a social club.

VP: The Forester’s Club of America. It’s still there. When I was a kid, I packed the cases of beer, cleaned up after the card games. I still can remember the smell of the stinky ashtrays—which probably had an influence on me later owning a bar. Most days I would get there at 3:00. My dad was a school custodian. He’d get back around 6:00. My mom cooked for the men at the bar on the weekend. There was a big hall in the basement where they would play team games and card games. There was an annual picnic, a Christmas party. A lot of meetings took place here.

VP: Yes, but not like a John Gotti “social club.”

EDGE: Is it true that you got into acting through Matt and Kevin Dillon?

VP: It was really Kevin Dillon who got me my first break. I used to drive a limo in New York and that’s when I met the brothers for the first time. I told them about my dreams of becoming an actor. They ended up seeing me at this community theater I was doing, and Kevin helped me out. He gave me the direction I needed to finally act. From there, Danny Aiello really became my mentor.

EDGE: One last Sopranos question. Your partner in crime, Pauly Walnuts, went from one line in the first episode to mob superstardom. How did that go down?

VP: The Sopranos was my dear friend Tony Sirico’s last hurrah. He had been in the business for twenty years, had come up through the ranks of indie films, and he had to make an impact. He had to get physically and spiritually more space. In the pilot his one line was Barone wants to talk to you. My part was much bigger. David Chase liked Paulie Walnuts, so he made Tony a technical assistant, and eventually wrote him in more and more.

VP: Like sharing a camera with an elephant! He wanted the whole camera, (laughing) but he let me squeeze in there from time to time. Tony was so experienced. I respect him so much. He always came to work prepared, ready, knew his lines, make-up was perfect. I truly learned from him.

EDGE: Is there a brass-ring role that’s out there for you? Is there a character you were born to play?

Editor’s Note: Tracey Smith is a freelance writer who lives in Chicago. She is working on a book about contemporary films on gangsters and organized crime.