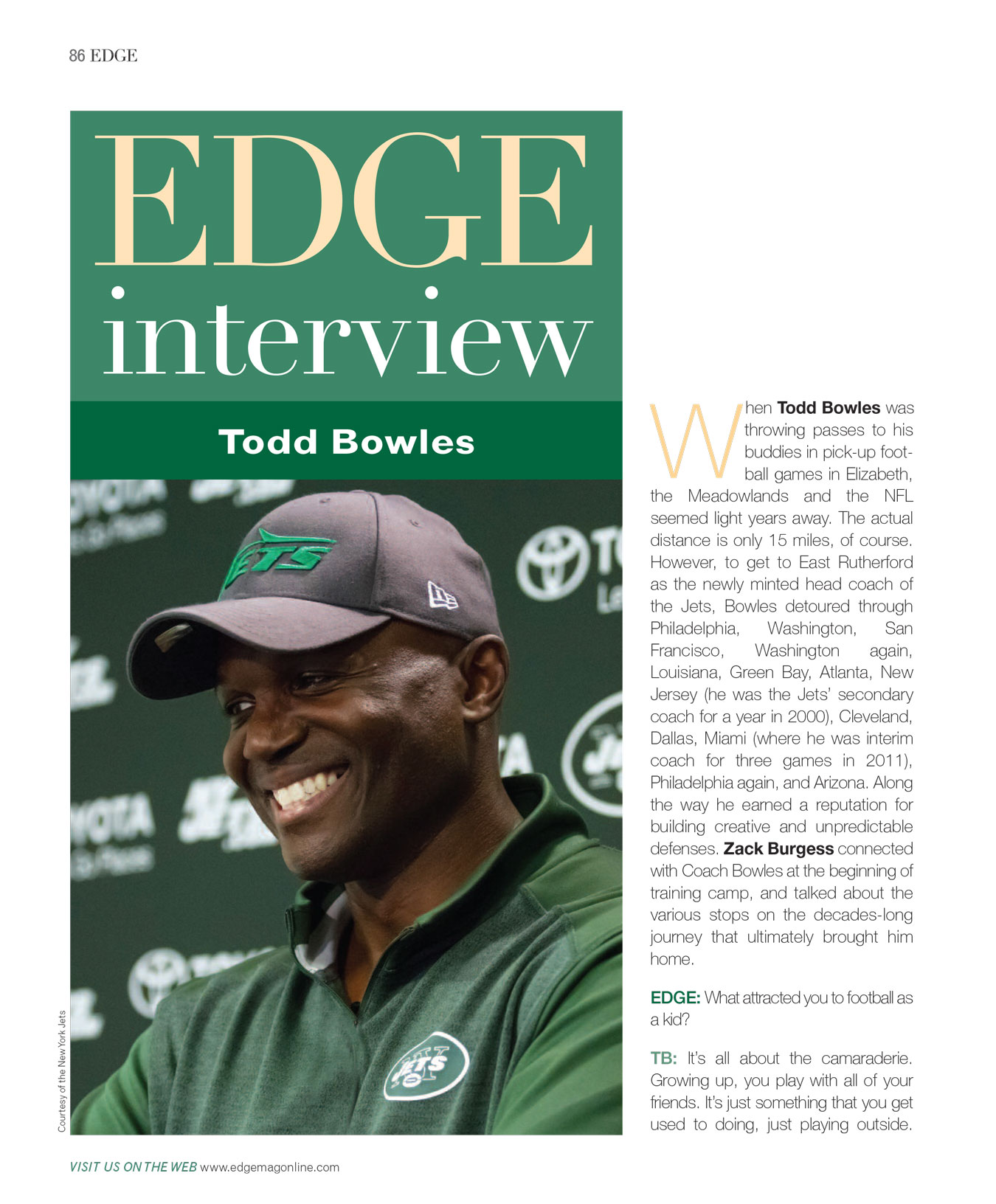 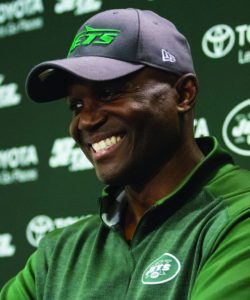 Courtesy of the New York Jets

When Todd Bowles was throwing passes to his buddies in pick-up football games in Elizabeth, the Meadowlands and the NFL seemed light-years away. The actual distance is only 15 miles, of course. However, to get to East Rutherford as the newly minted head coach of the Jets, Bowles detoured through Philadelphia, Washington, San Francisco, Washington again, Louisiana, Green Bay, Atlanta, New Jersey (he was the Jets’ secondary coach for a year in 2000), Cleveland, Dallas, Miami (where he was interim coach for three games in 2011), Philadelphia again, and Arizona. Along the way he earned a reputation for building creative and unpredictable defenses. Zack Burgess connected with Coach Bowles at the beginning of training camp, and talked about the various stops on the decades-long journey that ultimately brought him home.

EDGE: What attracted you to football as a kid?

TB: It’s all about the camaraderie. Growing up, you play with all of your friends. It’s just something that you get used to doing, just playing outside.

When I was growing up it was just a part of everyday life. You played football and you had fun. When it was time to go out for the teams, you didn’t really have too much pressure, because you were already playing every day with the guys that were going to be on your team. Every weekend we played, and you kind of crafted your skill that way.

EDGE: You were the quarterback.

TB: Yes, I was the streetball quarterback.

EDGE: Who were your football mentors and heroes growing up in Elizabeth?

TB: I didn’t have a true mentor as far as going to camps and everything. You kind of did everything on your own. We grew up playing a lot of street football. It was about 20, 30 kids that I grew up with. You looked up to the guys that were one, two, three years older than you. My brothers, they both were older than me. Just watching what they did and hanging out with them taught me a lot about the game.

TB: He did a heck of a job. We were just developing the team and the program when I was there. The year after I left, they went all the way and won the states. I played tailback, tight end, wide receiver, corner, safety—I don’t think I ever came off the ﬁeld. We had some good athletes on our team.

EDGE: You played under Bruce Arians at Temple. Was he pretty much the same guy then as he was when you were on his NFL coaching staff with the Arizona Cardinals?

TB: He was a lot more ﬁery at Temple. He was a young coach, just 30 years old when he got the job. But for the most part, he was always the same guy. He taught boys how to be men. You could always trust him.

EDGE: How good was the Owls defense your junior year? The team was in every game that season.

TB: Defensively, we were pretty good the whole time I was there. We had some very good defensive players in Anthony Young and Kevin Ross. We just couldn’t get over the hump. We played tough schedules back then. It seemed as if almost everyone we played was in the Top 25. There was some good competition back then. We fought pretty hard. 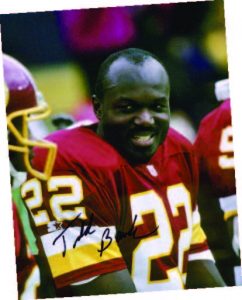 EDGE: You joined the Washington Redskins in 1986 and became a starter in your second year—the same year that team won the Super Bowl. At what point in the 1987 season did you start thinking, Hey, this is a championship-caliber team?

TB: The Redskins were good when I got there. They had gone to the championship game the year before against the Giants. All season, we talked about who we might be playing in the playoffs. That was our mentality going in with Coach [Joe] Gibbs. Everybody practiced and played that way. You carried your own weight whether we won 43-0 or not. If you didn’t play well, you weren’t going to be playing that next week.

EDGE: You won a lot of tough, close games that season right through the playoffs, then boom you destroy the Broncos in the Super Bowl. What goes through your head as a young player when you are part of a game like that?

TB: It’s something that you can’t even describe. When you get into those types of situations as a young player—going to the Super Bowl—everything moves so fast. It’s one of the happiest moments of your life. But you don’t realize it until ﬁve, ten years after it’s gone. You’re so busy having fun, enjoying the moment, that you don’t realize that you’re in it. It was one of the best things to happen to me.

EDGE: What inﬂuenced your decision to go into coaching? What did you feel you could teach others?

TB: When I ﬁrst retired, Emmitt Thomas, who is now in Kansas City and was my defensive backs coach when I played, told me if I wanted to be a good coach that I should get away from the game for at least two years. Otherwise, I would be teaching guys the same way as if I played, and I would be very disappointed. In other words, I would be teaching more from a player’s standpoint rather than a coaching standpoint. So I got out of the game for two years. When I jumped back in, I wanted to learn it from the ground up. So I went into scouting ﬁrst, with the Green Bay Packers. Then I went to college to see if I liked coaching. And I did. I enjoyed teaching young guys, the X’s and O’s part of it, and that really got me heavy into coaching.

EDGE: Which coaches really opened your eyes to what a head coach in the NFL had to do to be successful?

TB: It was a little bit of everybody. I think Doug Williams started it. Coaching with him in college at Morehouse and then at Grambling—seeing the things he went through and dealt with, and seeing how he treated people—that started me off right. Obviously, Coach Gibbs, playing in that system for him for years and seeing how he conducted things. He taught you how to be a professional. And Coach [Bill] Parcells really taught me how to see the whole game from an organizational standpoint and from a coaching standpoint. Coach Arians, as a player in college and later coaching with him in Cleveland and Arizona, I saw how he respected people and got the most out of his players, especially the second- and third-level players. Coach [Andy] Reid, the year I was in Philly with the Eagles, I probably learned more from a humility standpoint—with the passing of his son and all the things that were going on there—just seeing the difﬁcult things he went through and never letting it affect his coaching. He stood in the face of adversity and he was the same guy every day. That taught me a lot. Wade Phillips for a year in Dallas, he taught me how to have fun with the game, be yourself and just go with the ﬂow. I had a whole bunch of guys who have affected how I look at the game. I haven’t even named them all. 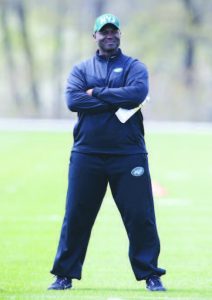 Courtesy of the New York Jets

EDGE: In what ways do NFL teams function as families?

TB: You have to learn to work together. You have to sacriﬁce and put all your egos to the side. You’re going to be in a building 8 to 16 hours a day, every day, with all these people—especially coaches, who work year ’round. For players it’s half the year. So you get to know these guys on a personal level and what makes them tick. They see what makes you tick. You kind of ﬁgure out what buttons to push; they ﬁgure out what they can and can’t do with you. There are a lot of personal relationships that go on behind the scenes that everybody doesn’t see. And you put out ﬁres just like any other family. There are spats here and there, but for the most part we’re around each other so much, we kind of get a good feel for each other. And whether you like it or not, you’re going to be a part of a family. You have your bad people and good people—and everything in between. But at the end of the day, we have to be on one working relationship.

EDGE: What are some of the do’s and don’t’s for an NFL coach taking over a new team?

TB: Don’t try to do more than you can. Keep it about football and don’t let the outside stuff bother you.

EDGE: When we watch the Jets this year, what should we be looking for that tells us This is a Todd Bowles team?

EDGE: How great is it to be home again—more pressure, or more relaxed?

TB: It’s more relaxed. As a kid growing up, you don’t see the outside world. You don’t travel very much being from Elizabeth. But growing up over the years and coming back to things you haven’t seen in a long time, that’s great. It’s great to be back. 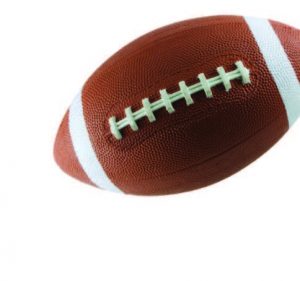 Editor’s Note: As the NFL season gets underway, Zack Burgess is completing his most ambitious sports project to date: a series of 32 books for young readers, one on each pro football team. His work for EDGE has included interviews with a wide range of non-sports celebrities, including Jaclyn Smith, Gloria Gaynor, Danica McKellar, and Beth Ostrosky Stern—all available on edgemagonline.com. More of Zack’s sports interviews can be found at zackburgess.com.