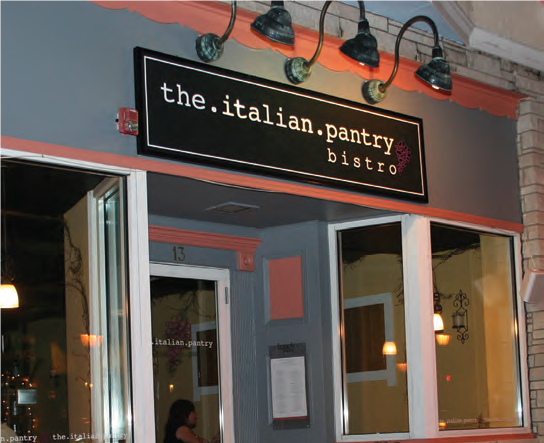 “This BYOB is crowded from the ring of the dinner bell ‘til last call from the kitchen.”

The Italian Pantry Bistro hits a trifecta of buzzwords for comfort in its name. Italian as a genre is the feel-good food of choice for many. Pantry is where all that good stuff in the kitchen is stored. Bistro signifies a down-home, hu 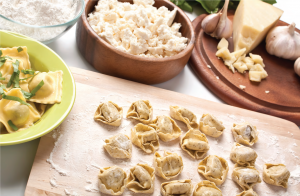 mble restaurant where local favorites are served. Frank Rizzo, chef-owner of The Italian Pantry Bistro, follows through on all the promises made in the restaurant’s name on his menu—in his cooking and in the attitude set forth in this small, near-Spartan storefront in downtown Cranford. “Comfort” may have become a gastronomic cliché, yet Rizzo and his crew disregard it as a sound-bite and wend their way around its possibilities with confidence and a smack of creativity. All that makes Italian Pantry a fun place to dig in to hearty grub. Which is why this BYOB is crowded from the ring of the dinner bell ’til last call from the kitchen. And why families, kids in tow, can be spotted doing early-shift eating—and couples catching a casual-dress date night knock wineglasses in twosomes and foursomes later on. For all its popularity in Union County, it flies under the radar of many of New Jersey’s restaurant groupies. That might be because it is devoted to the now-rather-passé Comfort Food category. Yet I’d bet a bite of sage-tinged French toast, in full fall regalia with the flavors of poached pear, red onion and a pungent blue cheese sauce, might tempt those trackers of trends. I know the baby-back ribs could stand against anything a destination barbecue shack in the South might be dishing up. You could rack up the clichés describing them—falling off the bone, licked with sauce neither too tart nor too sugared—but the point is the sincerity of the preparation. And, absolutely, the pert, moist, just-shy-of-sturdy cornbread served on the side. You could spend a lot of time wondering why you might never before have come across a sweet potato dumpling. Gently kneaded flour-water dough is plied into myriad shapes and stuffed with all manner of fillings the world over, but the marriage of petite fried turnover and mashed sweet potato is rare. It shouldn’t be. Especially if a swirl of chive oil is used as a spirited accent as it is here. Crunchy calamari with a tomato fondue reads like a signature dish for a restaurant called The Italian Pantry Bistro. But it was the weak link in the opening rounds, with too-tough squid giving off too much frying oil and a dipping sauce that needed to pack more of a spice punch. You’ll expect—and you’ll get—burgers, pizzas and pastas in this hometown-proud spot. But there’s always a twist, or a hint of something extra. It might be a “Buffalo”-style burger paying homage to that city’s famous Anchor Bar wings, slathered as it is with blue cheese. Or a beefy patty that’s another trip to the South, with Tennessee bacon, mushrooms, onions, Cheddar and a slap of that excellent house barbecue sauce. There’s a hint of truffle oil, a substance I usually dread, in the mix, but it’s a background note. Personal-size (jumbo personal-size, th 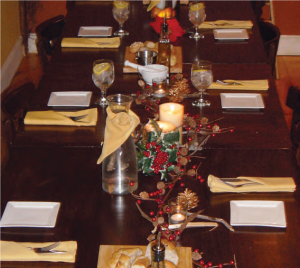 at is) pizzas (here, called pizzettas) aren’t the corner takeout kind. We took to the potato-onion-mascarpone pie, loving its charred crust and light-on-the-toppings style. I would’ve liked it even more with a more generous sprinkle of big-flake sea salt. Something to think about. That pizzetta offered a better use of the spud than the potato gnocchi, which weighed heavy in a terrific pumpkin beurre fondue sporting crispy fried sage leaves. That combo of high-fall pumpkin and butter has potential galore. You’ll see another riff on often-tired comfort fare in Rizzo’s chicken pot pie, which is topped with cornbread instead of either pastry or biscuit. It has all the usual suspects within (chicken chunks, mushrooms, peas, carrots) and a soothing gravy to bind it all together. Johnny Blue mussels, however, are anything but predictable. This season, the kitchen’s playing the pumpkin theme big, and it sets the bivalves in a startling sauce of pumpkin dotted with flecks of cranberries. It seems discordant at first, that swash of mildly sweet sauce with mussels, but there’s something funky and fun about the pairing. And the stand-up fries on the side don’t mind the frivolity. You guessed right: There’s a cupcake on the dessert menu. On this night, it’s a mini sweet potato number dressed in toasted marshmallow frosting. It’s fit for Thanksgiving. I had to laugh, eating one, as I imagined Rizzo and his kitchen team devising it as a spoof to all those marshmallow-topped sweet potato casseroles on holiday tables. Less satisfying was a baked apple dumpling that lacked substantial apple presence and seemed to try to compensate with too much walnut-raisin stuffing and a burst of butterscotch sauce. But a well-balanced poached pear crème brulée with a properly crusted top hit its stride, and the high mark for finales. The Italian Pantry Bistro is a neighborhood restaurant with a voice. It’s deliberately modest and humble, like many storefront BYOBs, but it doesn’t run with the pack by playing it safe with familiar dishes. No, instead, Italian Pantry spins comfort in a way that makes it impossible to take the genre for granted. EDGE 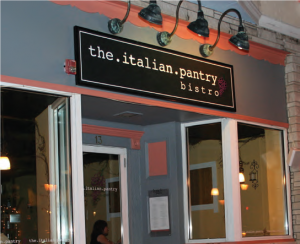