The Frog and The Peach -

“The ricotta gnocchi, lavished with black truffles and nibs of wild boar sopressata, was so sensational I did something I’ve rarely done when dining out on the job.”

The Frog and The Peach

In the beginning, there was The Frog and The Peach…I wrote that sentence in my mind more than 25 years ago, when I started reviewing restaurants in New Jersey and concocting a sociogram of sorts that linked anyone and anything culinarily worthy in the Garden State. The Frog and The Peach was nerve central, chair of the brain trust, the heart that pumped inspiration and example to everyone else who served forth to the public. The Frog, born in 1983 on a bleak side street in New Brunswick and named for a Dudley Moore-Peter Cook comedy sketch, is where trends and some of the most respected, accomplished culinary and hospitality professionals in the state got their start. Industrial chic? Marquee status to local ingredients? Eclectic, boutique, artisan wine list? Fine-dining at a perfect-pitch bar? Check off a list that goes on and on: It all comes back to The Frog. 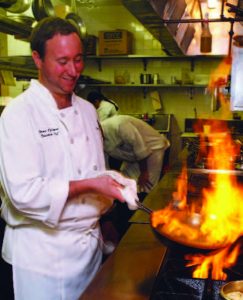 The Frog today is owned by executive chef Bruce Lefebvre, who purchased the restaurant in 2012 from its birth parents, Betsy Alger and Jim Black. (Rutgers grads, of course.) The married couple had transformed the circa-1876 building at 29 Dennis St. that once housed the printing presses for New Brunswick’s newspaper, The Home News, into a multi-level theater for dining, where various stages could be set nightly for a variety of experiences. Tete-a-tete in an alcove? Communal dinner featuring cult wines in a set-off space? New and novel bites at the bar? Alger and Black’s revolution of continual evolution at The Frog also ignited their neighborhood: Once desolate and stark, with but one other restaurant and a synagogue nearby, the Hiram Square community is now desirable and swank, with brick townhouses that look plucked from Philly’s Old City and luxury condos that house Johnson & Johnson execs. 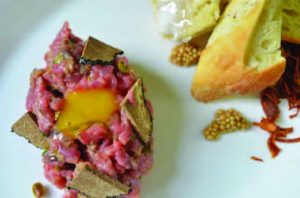 The Frog as design guru/community activist/social conscience, however, is another story.

Lefebvre (facing page), schooled at Wake Forest, the Culinary Institute of America, post-college Frog kitchen and stints at New York City landmarks Aureole, Daniel and Lespinasse, is tag-teamed by general manager/wine director Jim Mullen, an alum of Georgetown, the Corcoran School of Art and restaurants such as the ground-breaking New York wine-and-food mecca Montrachet. There are well-informed front-of-the-house folks no matter where you step and a kitchen crew that seems eternally tuned to Betsy Alger’s famously exacting orchestrations. That’s the way of The Frog, back to the David Drake days, the Stanley Novack era and the Eric Hambrecht reign. Every one of these acclaimed chefs did time as top dog at The Frog.

The current menu under Lefebvre hits on all cylinders. It’s neither silly-obscure nor fearful of challenging diners who come here expecting to learn. There’s Le Quebecois veal tartare, given the sultry counterpoint of winter trufﬂes more potent than the norm and pickled mustard seeds, a one-two punch of earth and warmth that cuts the richness of the veal and encourages a dab at the quail egg and a roll in the lardo. What could be too much luxury, particularly in a starter, is calibrated carefully—an exercise in control. 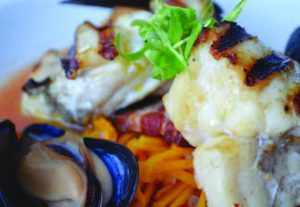 Littleneck clams are partnered with a classic companion, pork sausage. But it’s the infusion of fresh ginger that elevates the dish, intensifying the ﬂavors of both meats with a penetrating heat. Romanesco cauliﬂower, oh-so hip these days, is romanced by a fancy-schmancy duck Bolognese and a duck egg, then scattered with breadcrumbs. Intriguing, though its texture was off: I wanted to taste something crunchy or crisp to balance the plushness of the double ducks. Loved the concept of the octopus, billed as charred and Portuguese, even though it was served with a world of accents—enoki mushrooms, a chili-miso sauce, treviso, eggplant—but found the execution problematic: The chunks of octopus were alternately tough or mushy and the chili-miso sauce oddly without spirit. 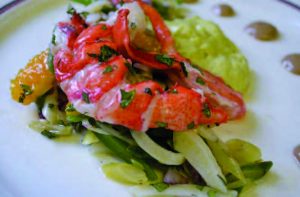 But the ricotta gnocchi, lavished with black trufﬂes and nibs of wild boar sopressata, was so sensational I did something I’ve rarely done when dining out on the job:  I hailed a server and asked for another round. I had to taste more—immediately—of those near-weightless mini dumplings I once believed had reached their apex at the restaurant Vetri in Philadelphia, but have a new master hand in Lefebvre. Strewn amid the gnocchi are strands of mildly bitter greens, sweet roasted garlic and squash, deftly inserted accents that, again, serve to balance more forceful ingredients.

Opah, a warm-blooded ﬁsh that ranges from pale pink to rosy red when served raw but turns ghostly white when pan-seared as it was here, was brightened by two strong plate partners: a walnut paste much like the Georgian condiment satsivi, which brought a butteriness to the dish, and an olive-spiked brown butter that added a smoky salinity. Pompano took on a world of accents—taro, an avocado-coconut mash, sticky rice and kale soaked in chilies—and might have been more successful streamlined. Duck is done as a duo here these days, Long Island breast and quarter-size meatballs parked on the same plate with pretty cold-weather vegetables: pearl onions, squash and Brussels sprouts. The unifying component here is the duck jus, lush as it is with trufﬂes and parmesan. That’s one delish sipper. Another twosome spotlights Iberico pork, 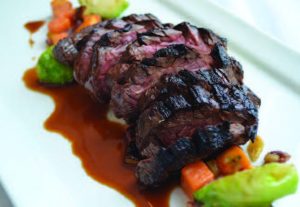 cured ham from Spain and Portugal. The Frog’s Iberico indulgence is splendid, what with a silky-textured skirt steak sliced from the pig and soulful nutty-herby croqueta made from braised rib meat. Maitake mushrooms, an aioli laced with sherry vinegar and blooms of nasturtium complete the plate. 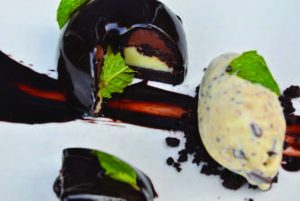 There’s lots of rum ﬁring the ﬂavor of the praline cake, which has an every-day-is-Mardi-Gras appeal. I was thinking the lemon-scented goat cheese tart needed a kick of another stripe to rev up its engine. But a confection that sounded ordinary—milk chocolate ganache isn’t exactly on trend these days—held my attention through the last ﬁne bite. 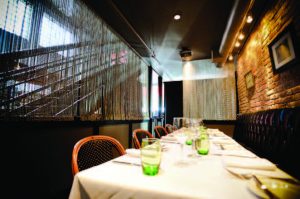 We don’t seem to want to leave The Frog and The Peach on this night; it’s late and there’s been a huge “Beer vs. Wine” dinner party in the garden room that I wish I’d had the courage to crash, the staff is quietly, discreetly re-setting tables for the next day. We should go home. But we linger. We’re in the bosom of the mother culture of restaurants in New Jersey, and it just feels good.