Nick Pizzonia, New Jersey’s leading advocate for artisan organic and natural wines, is having a morning-after revelation following a dinner crafted by Chef David Viana at Heirloom Kitchen in Old Bridge. Pizzonia describes each course in detail. He talks about the technical precision of Viana’s cooking, the pinpoint harmony of his plate partnerships and the revelatory ways the chef plays accent off the main ingredient. He talks about Viana in comparison to other chefs working today in the Garden State, and comes to the conclusion that Viana is a singular talent. But, the wine authority notes, Viana is plying his profession in unprecedented company. 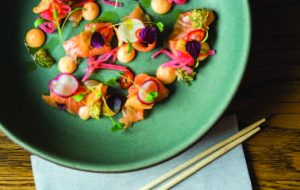 Yes, we are. In almost 30 years of writing restaurant reviews and covering all things culinary, I’ve never seen such a high level of talent spread so widely among the culinary professions in New Jersey. Chefs at ﬁne-dining restaurants get much ink and buzz. Yet also winning raves and fans are the Garden State’s farmers and food artisans, its neighborhood ethnic eateries headquartered in enclaves that reﬂect New Jersey’s richly diverse population, and its brewers and vintners.

Indeed, as the winners in the new Garden State Culinary Arts Awards show—from Common Lot in Millburn (Best New Restaurant), to The Bent Spoon in Princeton (Outstanding Food Artisan), to Melick’s Town Farm in Oldwick (Outstanding Farmer), to Flying Fish Brewing of Somerdale’s Gene Muller (Outstanding Beer Professional), to The Frog and the Peach in New Brunswick (Best Restaurant), and to Drew Araneo of Drew’s Bayshore Bistro in Keyport (Best Chef)—quality and star power are everywhere in New Jersey. 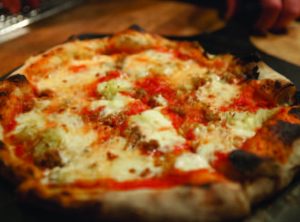 The headline that stopped Edible America in its tracks came this past September, when The New York Times restaurant critic Pete Wells awarded three stars to Chef Dan Richer’s Razza Pizza Artigianale in Jersey City. The cheeky headline read: “Is New York’s Best Pizza in New Jersey?” OK, we Joiseyans are used to this kind of stuff, this New Yawky taking ownership of New Jersey superiority whenever it suits.

Wells answered that question with a “yes.” But he also said something more important, something we must credit Richer for doing, beyond crafting the best pizza, bread and butter, as well as brilliant, exquisite, peerless salads: “…Razza dresses its pies with local ingredients so distinctive that every time I’ve eaten there, I’ve learned something about New Jersey farms.”

Bingo! Richer, going back to his days at Arturo’s in Maplewood, has been sourcing those “local ingredients” that are “so distinctive.” We’re familiar with our heirloom tomatoes, of course, but Richer brings to the forefront hazelnuts from good ol’ Rutgers U, mozzarella from buffalo in Sussex County, plus Jersey wheatberries essential to Razza’s pizza and pork from Jersey-raised pigs fundmental to Razza’s meatballs. As well as greens and lettuces, fruits and perhaps 30 seasons worth of vegetables. He gets what micro-seasons in the Garden State are all about.

So we have Richer and Viana and vivid voices such as Ehren Ryan, chef-owner of Common Lot—whose Bag of Egg and Crisps dish I challenge our new fans at The Times to refrain from headlining,  “Is New York’s Best Nibble Found Due West of the Hudson?” You don’t scan a menu at Common Lot without a brown paper bag of coddled, seasoned-egg-coated homemade potato chips in your hand, fortifying you for the task of editing down Ryan’s engagingly idiosyncratic menu to a manageable dinner.

Take evidence from an early fall dinner-for-two: Scallops, sliced and torched for a mere blink come fanned over the juice of a roasted chicken, then topped with nibs of preserved lemon and near-translucent shreds of pickled fennel. The interplay of sweet and sour, faint anise and bold earth comes close to being the complete aesthetic experience. As does rare beef tossed as lettuces might be with kohlrabi and apple, mint and Thai basil, then given a Peter Pan-style dusting of fried kombu and togarashi just for kicks. Literally.

Ember-roasted cabbage? Who would think that this, as an entree, could make my heart race? With a pesto-like backdrop of pulverized wild nettles, mushrooms both nubby-meaty and skinny-slithery, plus a salad of teeny ﬂowers and herbs as texturally compelling as a John Robshaw textile, my crush is understandable. You might fall for the elegant, compressed Berkshire suckling pig—as intense a dish as I’ve seen Ryan plate, what with farro, pickled tomatoes and leeks keeping pace with the pig and a paisley-shaped dollop of beer-infused mustard doing its best to counter the richness. Wimps might try to unite around something seafood at Common Lot, such as a pan-roasted tileﬁsh given a stew-like side of baby artichokes and grilled corn then topped with sorrel and muksy dashi fortiﬁed with corn husk.

This is New Jersey now. From Latour at Crystal Springs Resorts in Sussex County, whose culinary pilot is the exemplary chef and mentor Anthony Bucco, to Red Store in Cape May Point, the domain of its fearless and focused chef-owner Lucas Manteca, the Garden State’s map is pocked with pins earmarking destination dining. There are must-stops in New Brunswick for Bruce Lefebvre’s globe-spanning fare that won The Frog and The Peach the GSCAA’s Best Restaurant nod and in Keyport for Best Chef Araneo’s Southern-accented, soul-satifying dishes at Drew’s Bayshore Bistro. But then why not detour mere miles to Tinton Falls to score sweets made by the GSCAA’s Outstanding Pastry Chef Debbie Mumford at Mumford’s Culinary Center, taking in while you’re there the savory eats made by her husband, the legendary farmer-chef Chris Mumford?

While Chris Mumford was farming every inch of land in and around his late 1980s-to-late-1990s namesake restaurant in Long Branch, the Melicks of Oldwick in Hunterdon’s still-bucolic Tewksbury Township were not resting on the laurels of their 70 million years of tending orchards and ﬁelds in New Jersey. Well, maybe not 70 million, but you get the idea. George Melick, now 81 and pretending to be retired, saw his children, Peter, John and Rebecca win the GSCAA for Outstanding Farmer this year. The First Family of Farming in the Garden State is known for an ever-growing list of products: the state’s best apples and peaches, vegetables integral to the menus of chefs at top restaurants, sweet cider and, the newest offering, hard cider. You don’t know thirst-quenching till you taste Melick’s Ginger Hard Cider.

Speaking of thirst-quenching: The neck-and-neck award in the GSCAAs could have gone to the three ﬁnalists in the Outstanding Beer Professional category. Gene Muller, of Flying Fish, nabbed it, but his worthy adversaries at Carton Brewing in Atlantic Highlands and Kane Brewing in Ocean Township are to micro-brewing today what Bud and Ballantine were to macro-brewing back when. As a friend was telling me about his addiction to matching Jersey brews to Jersey cheeses, I immediately mind-ﬂew to a pair of Garden State cheesemakers whose cheeses will be at my own last supper: Eran Wajswol, of Valley Shepherd in Long Valley, and Jonathan and Nina White, of Bobolink Dairy & Bakehouse in Holland Township. Some great names, huh?

Truth is, my favorite way to play the name game in New Jersey’s culinary star galaxy is to list my favorite ethnic eateries. I love to say “Cucharamama,” the name of James Beard Award-winning Chef Maricel Presilla’s ﬁne-dining restaurant in Hoboken, but I love to eat her South American food even more. Don Julio, the Chifa restaurant (Chinese, Peruvian-style) in Elizabeth, is on my lips every time I’m hungry and craving wonton soup and fried rice that’s a thousand steps up from strip-mall Chinese take-out. 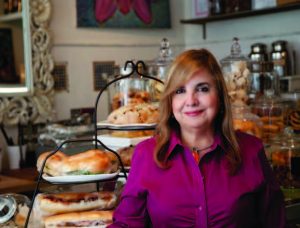 The thing I may love most about eating in NJ is ﬁnding ethnic fare in seemingly unexpected places: Who, outside of Jersey, would think Atlantic County is a hotbed for Vietnamese?  Lucky us, living here and knowing better. Count me as one of the many No. 1 fans of Tieu Mien Tay in Pleasantville. Korean? I happily pound the streets of Palisades Park and Fort Lee way up north for the beguiling dishes of Korea, but right at this moment, I’m soft on Soft Tofu in Fort Lee. Middle Eastern is suddenly all the rage, thanks to MishMish in Montclair, while Eastern Mediterranean just might be the coming rage now that newcomer Reyla has taken hold in Asbury Park. 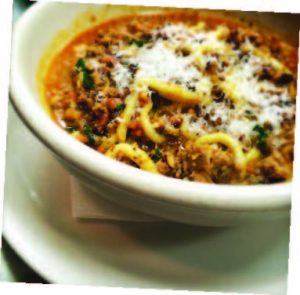 So why do I have such high hopes for New Jersey’s culinary future? Because 2017 is yielding an excellent crop of newcomers to the scene.

I mentioned Reyla, a sister restaurant to one of 2016’s top new restaurants, Barrio Costero. The Asbury Park siblings are now two of the hottest draws in the beach city, Barrio for modern Mexican and Reyla for both classic and creative updates on Eastern Mediterranean. There’s also Cargot, a classy French brasserie that’s new in Princeton; Gayeon, a modern Korean in Fort Lee; Hearthside, a wood-ﬁred mecca in Collingswood; and Juniper Hill, a ramped-up roadhouse in Clinton Township where ﬁne-tuned seasonal small plates rule.

The reincarnations of Cranford’s own A Toute Heure and 100 Steps, sold by Andrea and Jim Carbine into hands as capable and nurturing, are showing that second turns can be ﬁrst rate, with Alexandre Gomes doing high-style fare that’s both exquisite and accessible at ATH and Joe Beninato offering unexpected takes and ingredients on plates that make OHS more than a supper club.