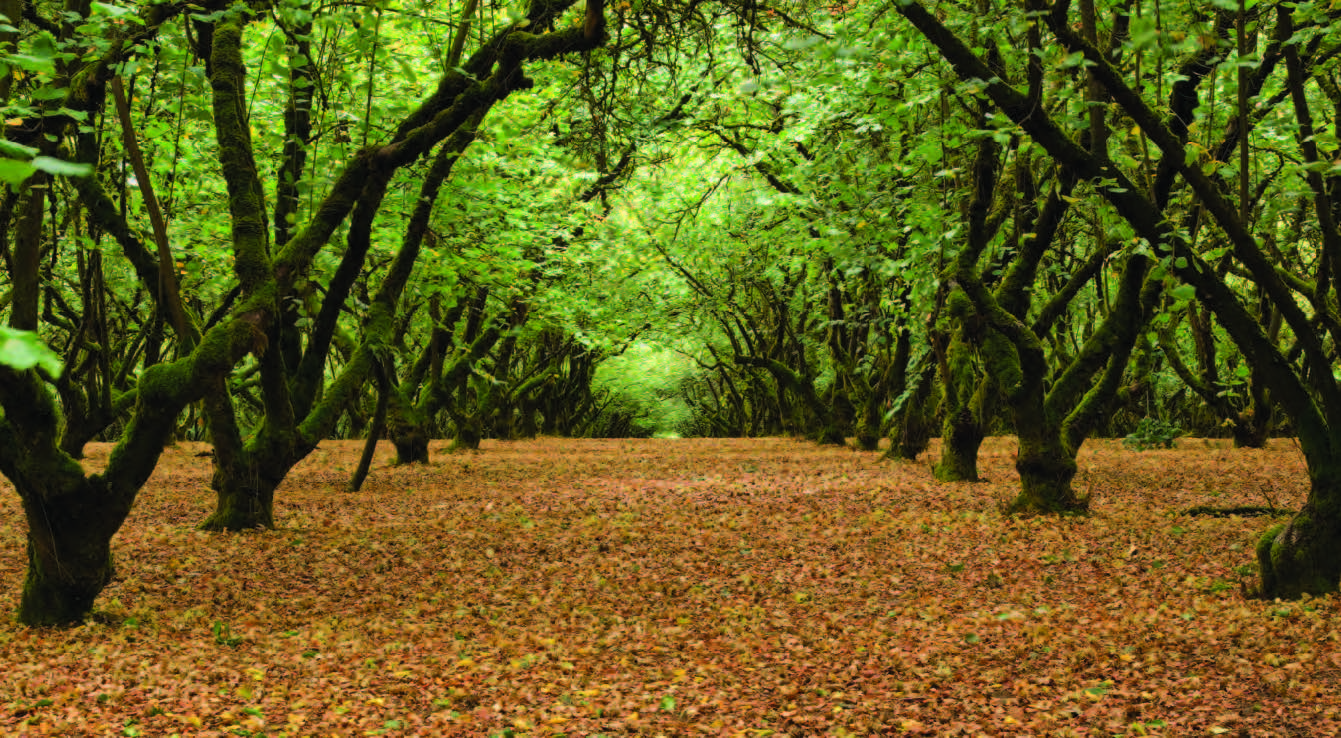 Where on earth do you get this stuff? 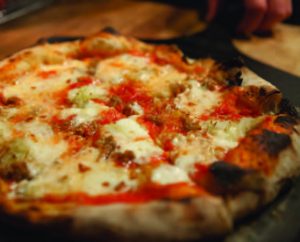 Dan Richer, the multiple James Beard Award-nominated chef at Razza Pizza Artigianale on Grove Street in Jersey City, may have skipped his graduation ceremony at Rutgers to go to Italy, but he’s been the university’s biggest booster as a restaurateur. You’ve heard of Richer’s renown Project Hazlenut Pizza? No? Well, look it up on The New York Times web site and understand why the newspaper’s restaurant critic Pete Wells gave Razza a three-star review in 2017. The background according to Richer: Before the 1900s, the hazelnut tree was prevalent in New Jersey. Disease wiped it out. Oregon became the hazelnut capital of America. But, with hazelnuts in demand, a worldwide shortage ensued. Enter Rutgers, with its prominent school of agriculture and Dr. Thomas Molner, the head breeder of what soon would be known as Rutgers Project Hazelnut. Molner and his crew worked, and worked hard, to revive the hazelnut in New Jersey. What they produced, Richer supported – by purchasing the crop. He made—of all things—a pizza of hazelnuts. A pizza! Who knew? “The Project Hazelnut Pizza has hazelnuts, a little fresh mozzarella and ricotta and a few drops of local honey,” Richer says. It’s brilliant. Unlike anything you’ve ever tasted. And pure Garden State. “Now there are more than 10,000 hazelnut trees in New Jersey under Rutgers’ supervision.”

Travel down Ryders Lane in the New Brunswick-Millstone environs and take them in. Extraordinary. And it’s thanks to a famous chef that the hazelnut, Dr. Molner and Rutgers are getting their due.

Who are the other farmers and food artisans Richer relies on to keep Razza riding high?

“My neighbors at Cedar Hill Farm, on Red Hill Road in Middletown, Agnes deFelice and her son Gary deFelice,” Richer says. The deFelices grow strawberries on their farm for Razza and, during that precious three-week season in spring, Richer picks them up on his way to the restaurant and takes in the aromas of still-warm-from-the-sun strawberries all the way from Middletown to Jersey City. “On Day One, we do strawberry salad. Day Two, we have to put them in the fridge, so we make strawberry jam or a topping for dessert. I just guarantee Agnes and Gary that I’ll buy whatever they pick. It’s worth it. The season is so short. I just pray they don’t sell their land to developers.”

What and who are the favorites of other restaurateurs and chefs?

“Dreyer Farms in Cranford is a seven-acre farm in an area that has become surrounded entirely by suburb. Family-run for generations, they have a great farm market for consumers and they also work well with restaurants, letting us know what is coming in and making sure we are able to take advantage of it.

“Mike Baker is a lawyer first and a farmer second. He owns 4½ acres in East Brunswick, and basically grows us whatever we ask for. We have a meeting every year at the end of winter and decide what the plantings will be for the coming year. He supplies the lion’s share of our heirloom tomatoes—also a tremendous amount of herbs that we use.” 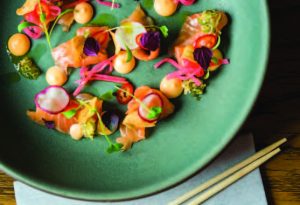 “We use a few local farmers for very specific items and they are all very seasonal. We love what they produce—in season. First is Malcolm Salovaara, of PK’s Four Brothers Farm in Bernardsville. This is a family-based farm who raise mainly pigs and chickens. The chickens are some of the best I have eaten anywhere. They are very seasonally driven, so the chicken season is from around April to October. We use the chickens with ramps, morels, spring items that bode well with the flavor of their chickens.

“Second is Dan Liplow, [who operates] the Foraged Feast, all over New Jersey. Dan is our forager and mushroom guy. During spring, summer and fall, Dan will search out interesting ingredients for us to test in our dishes. He brings sassafras for us to use, which we turn into root beer. Wild garlic roots, wild watercress. He also brings us black current wood for oils. During the winter months he has access to cultivated mushrooms that are by far are the best-tasting mushrooms.

“Third is Colleen Gilmore, of Buds and Blooms in West Milford. Colleen has a small farm that supplies us with all different types of herbs, edible flowers, small heirloom tomatoes and other little items. We sit down and chat about what can she grow for us—bronze fennel, Thai basil flowers, chive flowers, etc. The quality of the herbs and flowers is second to none. So pungent, so much flavor, and they look so bright.” 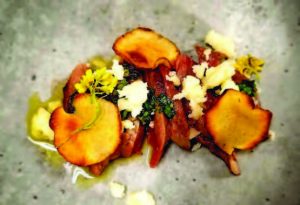 “We use Korean grapes and pears from Evergreen Orchard Farm in Yardville. We compress the pears with stracciatella from Italy and preserve the grapes for our semifreddo. We use potatoes and cabbages from New Sung Sang farm in Millstone. We hay-smoke both the cabbage on a pork dish and purée the potatoes as a thickening agent in spaghetti, with mussels.”

Bruce Lefebvre • Chef-Owner The Frog and the Peach • New Brunswick

“We love Valley Shepherd Creamery in Long Valley. The owner and cheesemaker is Eran Wajswol. (Valley Shepherd) has more than 500 sheep, 100 goats and 50 cows. Eran uses traditional European methods to produce many kinds of cheeses from grazed animals’ milk. They milk the female ewes on their unique rotary milking carousel, which you can see firsthand by taking one of their tours in spring. They also age the cheese in a hillside cave. We have used so many of their cheeses over the years, including Oldwick Shepherd, Crema de Blue, More Beer, Oldwick Shepherd, Nettlesome and Carameaway. Valley Shepherd Creamery also has a shop that is open to the public.”

“We get fresh greens year-round from Lew at Thompson Family Farm. He grows beautiful hydroponic greens right in Wall, which is like 10 minutes away from our restaurants. A few years ago, we asked him to put together a mix with tatsoi and mustard frills for Talula’s and I’m pretty sure his ‘Asian mix’ is one of his best-sellers now. It’s always awesome when farmers are willing to grow specific things you ask them for.

“At Modine, we have put a lot of thought into our meat program. Our chef Chris is a skilled butcher, so we have the ability to source larger cuts of meat and break them down ourselves. He’s been working with Fossil Farms since opening. All of our eggs, beef and pork comes from them. We get whole Berkshire and Duroc pigs that are pasture-raised, completely naturally, which means without hormones or antibiotics. It’s pretty cool that our meat is completely traceable and comes from less than 100 miles away. Also at Modine, we love getting the freshest, most delicious local oysters from our good friends at Barnegat Oyster Collective! It’s a family-run business and they represent 12 local shellfish growers in the Greater Barnegat Area. You can always find their oysters on our menu, either raw with a seasonal granita and/or broiled with chipotle bourbon butter.”

(Shanti quotes oyster-grower Sarafina Mugavero of Forty North Oyster, who says: “The number of oyster-growers has grown just in the past few years because more restaurants and retailers are supporting a burgeoning local agriculture industry.”) 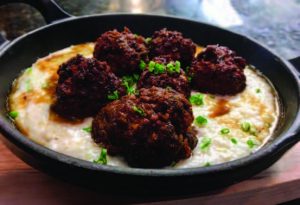 Courtesy of A Toute Heure

“I use a lot of farms. I think it’s important to support the community you live in as well as small businesses. I extend that theory to other purveyors, not just farmers. [I use] Breadsmith in Cranford and Dan Lipow’s Foraged Feast. Roamin’ Acres in Lafayette raises Berkshire pigs, and one of the products they do is prosciutto. Cured in the same way prosciutto in Italy is treated, salt-cured for 18 months. I have eaten many prosciuttos and cured hams, and the flavor of this one is remarkable. The color is vibrant red, the fat is pure white, and there’s a slight crispiness to it. It is hands-down my favorite cured ham.

“It’s funny how the food world in NJ is seemingly large but, in reality, quite small. Everybody knows everybody.”