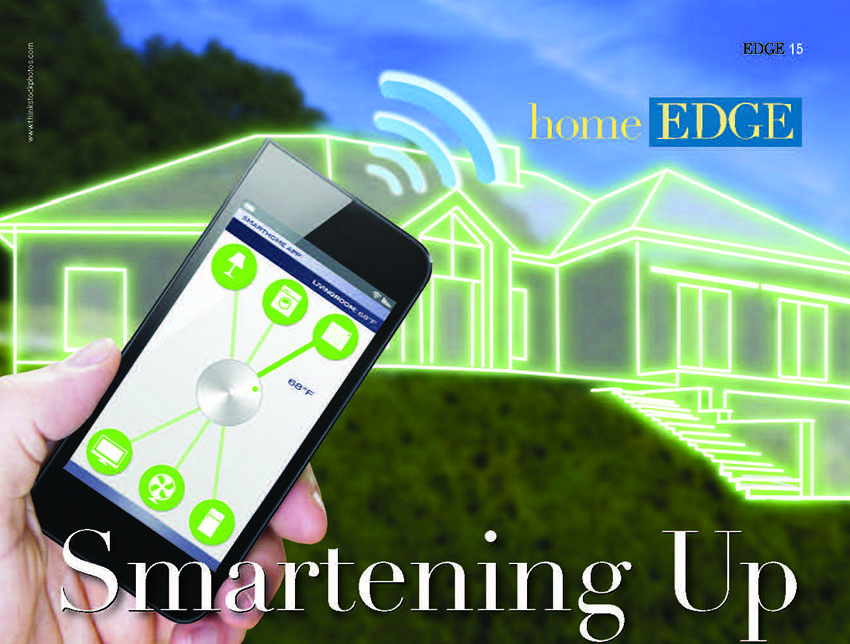 Yes, there is hope for your dumb home.

Is there anything more ﬂattering than the discovery that you’re being fought over? You may not realize it, but as a suburban homeowner, you are the object of intense desire on the part of a very active group of venture capitalists, who are snapping up patents for future “smart-home” products and technologies. Perhaps it is more accurate to say that they are ﬁghting over the companies that will be ﬁghting for your business in 2015 and beyond. The battleground? Your “dumb” home.

We’ve been hearing about smart homes for the better part of a decade. These are the fanciful dwellings that practically run themselves, or at least do our bidding with a minimal amount of hands-on technical expertise. They know when we’re home and when we’re not. They run the lights and heat for us. They brew us coffee, start the shower and warm up the car on a cold morning. They remind us of appointments or can’t-miss TV shows. They even let us know when something under the ﬂoor, behind a wall or out in the yard isn’t working quite as well as it should. Unfortunately, because most of us live in older homes or apartments, a smart home has been out of reach. It’s been too expensive or too complicated to consider. 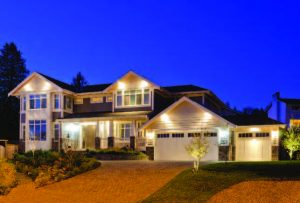 Well, no matter how tech-averse you may be, it may be time to reconsider.

This is where those battling venture capitalists come into play. They look into the future and see every home as a smart home. And as investors, they want a big piece of the action. They want to own the stuff that will enable you and me and the elderly couple down the street to make our homes super-smart. And the sooner that happens, the sooner the venture capital generates a return. The result has been an acceleration to near-blinding speed of the technology and products that can actually make that happen.

It’s available, it’s affordable, and it’s not all that hard to ﬁgure out. 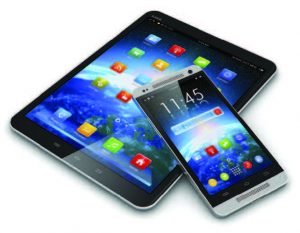 Why the sudden surge in smart-home products? The answer is the “smart phone.” The Apple iPhone and its imitators have penetrated the communications market so quickly and effectively that whoever doesn’t own one now will probably break down and buy one in the next few years. Smart phones aren’t really telephones in the traditional sense. They are small, handheld computers that link wirelessly with computer networks, enabling people to communicate by voice. What smart phones (and tablets) are really good at is functioning as remote controls and monitors for smart-home networks. In essence, most of us already own the remote control to a smart house…we just don’t have the smart house yet.

As a consequence, the competition to sell you the technology needed to make your dumb home smarter is heating up fast. If you’ve been to a Lowe’s or Home Depot lately, you may have noticed a lot of new products in this category. They are often situated in high-visibility locations. 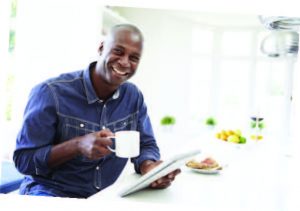 Your alarm clock wakes you up…it turns on the shower to exactly the right temperature…your ﬂat screen clicks on to your go-to morning show…your cell phone gives you a head’s-up on a developing trafﬁc or weather issue between your home and workplace…as you move from the second ﬂoor to the ﬁrst, the thermostat lowers on one level and rises on another…your coffee maker grinds fresh beans and makes a pot of coffee in time for your arrival in the kitchen…your sound system plays your favorite morning tunes or talk station…a tablet lights up with the front page of your local newspaper… the car starts and warms up for you…the thermostat drops 10 degrees…and the house locks and arms its security system as you speed away. 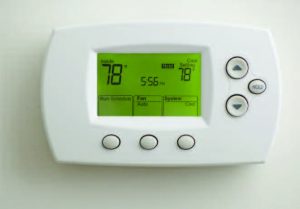 Many of the brands should be familiar. Among the companies moving into this space very aggressively are Honeywell, Stanley and Kwikset, along with names that are quickly becoming familiar, such as Lutron and Nest. Nest, which made a lot of headlines in 2014 after being purchased by Google, was started by two former Apple engineers. Not surprisingly, Apple, Google and other major companies—including Comcast and Verizon—are hoping to carve out a dominant position in the smart technology market.

Are we really at the point where every family with a high-functioning phone or tablet can make their home a smart home? Indeed we are. If you have an Internet connection and wiﬁ (a wireless router) in your house, then you are good to go. Just using widely available plug-in devices and changing out a couple of items like thermostats, you can create a basic mesh network that can be controlled from your bed, your car or your ofﬁce through an easily accessible web interface using your phone. 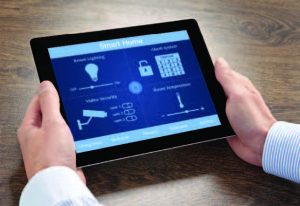 “A homeowner can create an effective mesh network with a couple of wiﬁ-enabled thermostats and a handful of plug-in devices that control table lamps,” says Andre Conway, an industry consultant who works with commercial and residential security clients in New Jersey, Pennsylvania and New York. “The beauty of this technology is that the more devices you add, the better the mesh becomes and the smarter your home can be.”

“With a more advanced system,” he adds, “you can talk to your phone and instruct your house to turn down the heat, turn up the lights, start the dishwasher or even open the door for the UPS driver—and then lock it again once you’ve watched him drop the package in your house.”

A decade ago, none of this would have been possible without a hefty bill and a byzantine web of timers and controllers. Devices weren’t very good at talking to one another. Today, says Conway, with more open-code development, building a really good system yourself might set you back $1,000. More important than the bargain price is the fact that you don’t have to be a rocket scientist to make it all work. Ease of use and affordability are the beneﬁts to consumers from increasingly cutthroat competition.

So what can a smart home do that your dumb one can’t?As much or as little as you want it to. A smart home can be programmed to execute a variety of functions, saving time and money, or just providing added peace of mind. A smart home can even be taught to “anticipate’; there are sensors on the market that know who each household member is, where they are, what they are doing, and even what they might want to do next. 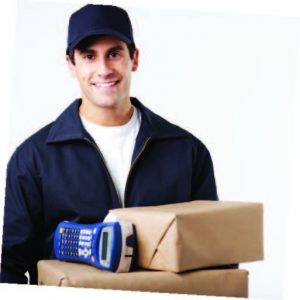 You are busy at work or on an endless string of errands….you get a message from FedEx or UPS about a drop-off…the driver lets you know when he is at your door…you disarm the security system, unlock the door, and watch on a monitor as the package is dropped safely inside your home…you then re-lock and re-arm the system…on your way home, you decide to stop for a drink with a friend and tell your home to keep the heat down, plus turn on a couple of lights…later that evening you turn up the heat, turn on the music, run a bath at exactly 120 degrees, and preheat the oven…all from your car 20 minutes from home.

For those who want a smart home but don’t trust themselves to set it up properly, there are plenty of companies that will come in and do the job for a very reasonable price. As a rule, they don’t make their money selling you a system. Instead, they charge you monthly to make it work, much the way your cable companies charges you for programming and DVRs. The leaders in this ﬁeld (for the moment, at least) are home security companies. The one you have now probably offers a smart-home package of some kind. If not, another security company will gladly rip out a competitor’s at no cost to secure your business. 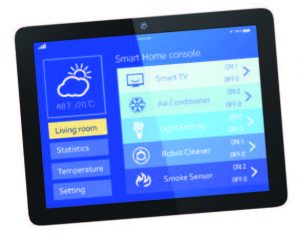 There are good deals out there right now, but those deals are likely to get even better as more players enter the game. In the near future, consumers considering smart-technology retroﬁts will most likely be choosing between their home-security company, their telephone company, their cable company or their Internet company. High-end audio/video installers will also be vying for a slice of the pie. Each will offer something enticing to get into your home. It is worth noting, however, that your existing security system won’t integrate easily into a smart-home makeover, unless your existing security company gets the job. 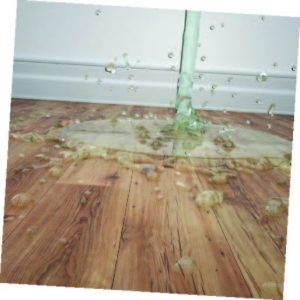 You are away for a ski weekend and the mercury plummets…you get a text from your home that a pipe has cracked…the water to that part of that house is shut off…the heat near the pipe is turned up…you call a plumber to check the problem…using your smart phone, you let him into the house…you observe/record him as he works to repair the issue…you re-arm the security system after receiving a text that the plumber is done…you continue skiing…you return to a fully functioning plumbing system instead of a catastrophic ﬂood.

Don’t Use Your Dog’s Name

What is the downside to all of this smart technology? Obviously, if you lose your connectivity, your home becomes dumb again in a hurry. A long-term power outage or Internet interruption means having to operate lights and appliances yourself until everything is up and running again. Every system is designed with manual overrides (and hopefully we can all remember how to operate a light switch), but there are some smart devices that become problematic during outages. After Hurricane Sandy, for example, some apartment dwellers with “smart” keyless locks felt pretty stupid when they couldn’t get into their units.

Perhaps the most signiﬁcant potential negative in a world of smart homes is how incredibly dumb we are about passwords. Poor (or poorly protected) passwords in the hands of the wrong person could be catastrophic. Not only would clever criminals be able to disable your alarm system and open your front door, they could conceivably continue into your home computer and, through that, your work computer (Hello, Sony!). And because all of your devices will be part of a network, a smart lamp, smart dishwasher or smart garage door opener might be the softest point-of-entry for hackers.

Interestingly, in anticipation of this brave new world, Congress is working on a bill that would prevent manufacturers from selling you anything with a default password. In other words, before activating a product, you would be compelled to create a password. Currently, the percentage of people who never change the password from “password” or “12345678” is appallingly high.

If you are currently resistant to the whole idea of creating a smart home—either because of the aforementioned issues or simply on principle—be prepared to ﬁnd yourself in the minority in a few years. It is easy enough to operate and cheap enough to afford right now, and the products will only get cheaper and more user-friendly. Soon, almost all quality appliances will be available with built-in wiﬁ in order to integrate into a mesh network. And as your smart phone gets smarter, it will become the remote control you simply talk to and tell what to do.

Indeed, with each passing day, more and more people just like you will be walking through their front doors shouting, “Honey, I’m home…” only they’ll be talking to their house instead of their spouse!