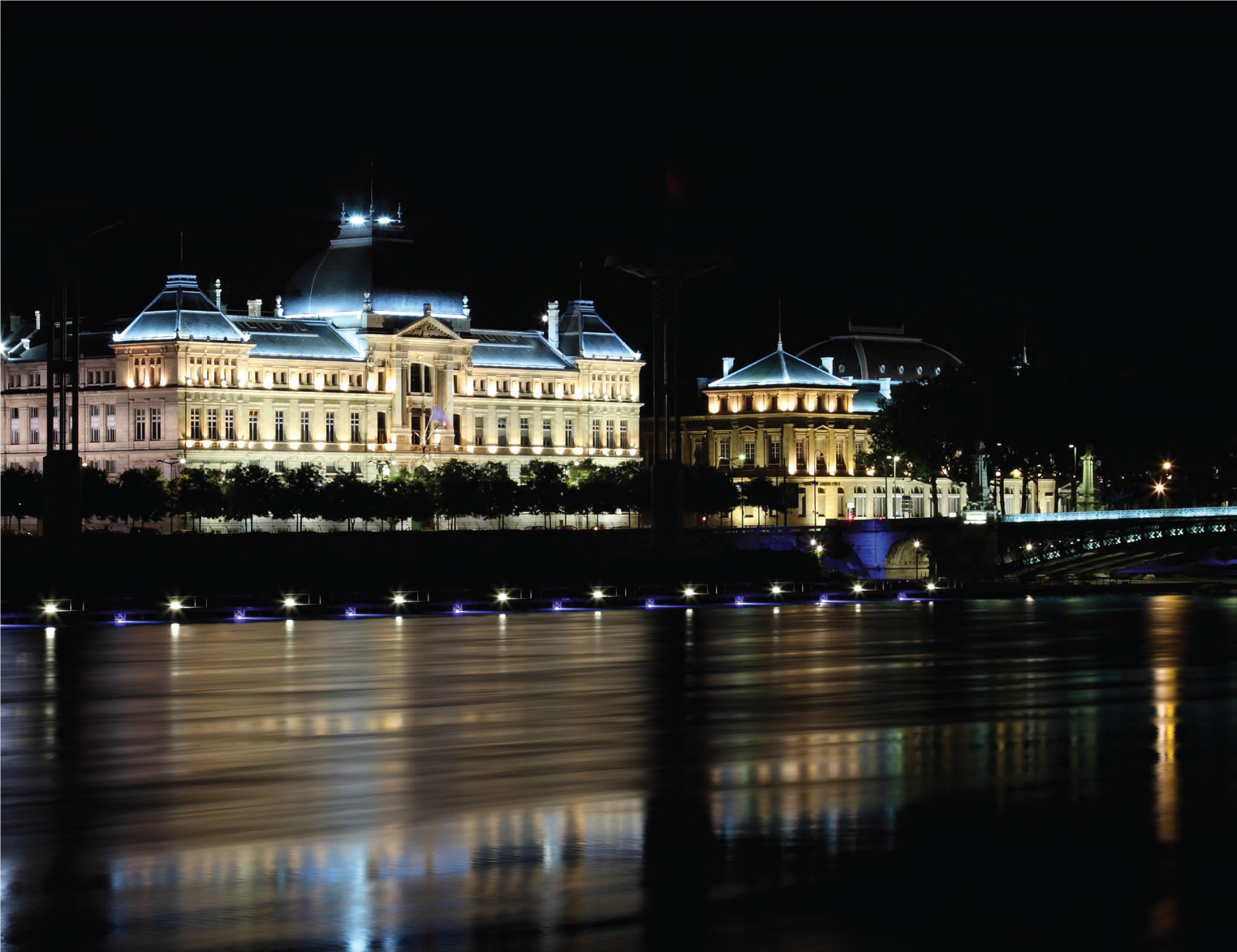 built on sand doth crumble, but the palace built on silk endures.’ 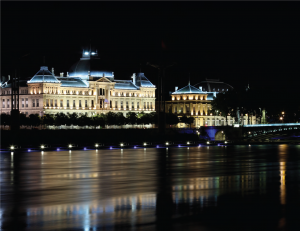 Silk, the fabric of kings and emperors—of nobility, popes and czars—has always signified wealth, prestige and luxury. Always? Probably, that is if you agree that a commodity cherished since 5000 B.C. merits such a term of longevity. Pharaohs dating back at least that far have been disentombed, their royal cadavers worshipfully swathed in silk. In ancient Rome, the wearing of silk was forbidden the ordinary citizen. Only members of the imperial family could appear in public wearing it. In Europe, by the 15th century, the French city of Lyon was calling itself the Silk Capital of the World. 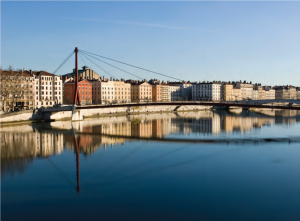 How justified was that claim? Well, when that bit of braggadocio first surfaced, it’s more than possible that China, Korea, India and who knows what other kingdoms might well have challenged Lyon for the title. But today, in the rarefied world of haute couture, Lyon with its silken boast, is right on the money. A city of half a million, Lyon is situated between two rivers: the fast-flowing Rhone and the gently flowing Soane, both passing the city, southbound to the Mediterranean. Of its long and proud history, suffice it to say that it once was the capital of Gaul and often visited by more than one Emperor. In the last two or three years, the traboules of Lyon, those 18th-century covered passageways that crisscross the silk workers’ district, have seen a virtual stampede of designers and couturiers. They fly in from Milan, New York, Tokyo and all points in between. Their names read like a celestial roll call in the paradise of high fashion. Dior, Lanvin, Chanel, Versace, Vera Wang. They come intent on securing exclusivity, or the nearest thing thereto, on the exquisite fabrics that spill forth from the looms of Lyon. Silk, which never ever was out, is now more than ever in. From the silk-wrapped heels of shoes by Dries van Noten to the extravagant ruffles of Lanvin’s evening wear, the word is SILK. Contradicting everything that fashion pundits know about trend, style and fad, silk retains its hold on elegance even while it also successfully teams up with jeans, beach wear and the most casual of the casual. Not possible! Yet true. Lyon owes much of its silky prestige to François I, the first Renaissance king to grace the French throne. A major patron of the arts and a great admirer of Italian style and elegance, he was determined to see France surpass Italy in all artistic endeavors. To that end he persuaded the great Leonardo da Vinci to quit his native Tuscany and come to live in France. Leonardo packed up bag and baggage, tucking into his luggage his favorite opus, “La Gioconda” (aka Mona Lisa). After he died in 1519, cradled in the arms of a weeping King François, that masterpiece became French property. Today it hangs in the Louvre in Paris where, as a touristic attraction, it ranks second only to the Eiffel Tower. Apart from luring Leonardo and his Mona Lisa to France, Francois I also determined that the weavers of Lyon, specialists i 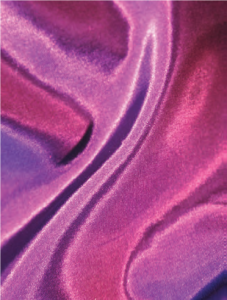 n the secrets of silk-making, should be elevated to the front ranks of French commerce. To accomplish his objective he opened the royal purse strings to attract Europe’s finest weavers. Before his reign ended in 1547, Lyon was acknowledged as the primary source for the finest silks the world had ever seen. For the next 300 years, the weavers of Lyon thrived, lodged in high-ceilinged buildings, designed to accommodate their huge hand-operated looms. Today the looms of Lyon are high-tech marvels, controlled by computers. But in the section known as Croix Rouge, a handful of the ancient looms remain. To the delight of tourists, the weavers perform their ancient rites, still turning out priceless yardage. Few who watch the process escape a visit to the adjoining gift shops, all amply stocked with scarves, shawls, ties, skirts, shirts, purses, bedding, all of course of priceless silk. “I use silk in every one of my collections,” says Andrew Gn, the Singapore-born, Paris-based designer whose highfashion creations are carried by Bergdorf Goodman. “Silk drapes much better than anything else…and the contact of silk with skin is irreplaceable.” In his forthcoming Spring/Summer 2011 collection, Gn uses a magnificent triple-silk crepe, specially woven for his atelier. As he puts it, “Silk translates colors much better; it makes them extremely rich.” His clientele consists in large part of individuals seeking one of- a-kind creations which can be worn in the sure knowledge that her choice will not be replicated. (It’s an assurance that doesn’t come at bargain prices!) Monsieur Gn’s clientele, which includes a healthy smattering of royalty and easily-recognized names from the world of diplomats and heads of state, professes fierce loyalty to their designer of choice. Simply put, “He’s a genius,” was the gratuitous observation by an obviously satisfied client. For Andre Claude Canova, a passion for the silks of Lyon began more than a quarter of a century ago. Today he designs his own collection, which includes the most exquisite silk scarves—some of which encompass as many as 15 or 20 different colors, an achievement unequalled by any other designer. His studio at 26 Quai St.Vincent in the heart of Lyon is an old Carthusian residence, its entrance a handsome horseshoe-shaped Renaissance staircase. Favored buyers are received in its superbly furnished salons, the walls lined with…what else? Pure silk. The ambience is unmistakably Old World but the scarves, vests, pillows and jackets are on the very cutting edge. His own special design of scarf suspenders created a minor tsunami in the world of fashion when they first appeared. Supermodel Jerry Hall was so enchanted with them that she ordered 20 pairs. Princess Caroline of Monaco is frequently photographed in them and when the G-7 convened in Lyon, Bill and Hillary were delighted to be presented with a selection of Canova scarf-suspenders. An undoubted original, Andre Claude-Canova, when asked the source of his creative inspirations, replied, “Travel, history, nature.” He went on, “It can be a sunset in Tuscany, the masks of the Maasai, the silky pearl shades of a Maharajah’s robes, or the jewels of the Taj Mahal…” But the one constant in all of his creations is silk, woven in an unmatched panoply of colors. The distinction of being the oldest silk factory in Lyon belongs to Prelle et Cie, which has been in continuous operation since 1752 and is owned today by direct descendents of its founders. Apart from its stylish contemporary output of scarves, ties, shawls and other pieces, Prelle has proven invaluable in the rarefied world of authentic restoration of palaces and castles, historical houses and public places. It counts among its restorative masterpieces the authentic recreation of the silk brocades used in the Royal Bedchamber of the Sun King, Louis XIV, at Versailles, the draperies and upholstered pieces at Biltmore in North Carolina and at Ash Lawn, the ancestral home in Virginia of James Monroe. Such historical replication of two- and three-hundred-yearold fabrics is possible thanks in part to the exquisite workmanship of the Prelle artisans, and in part to the company’s scrupulously maintained archives, which date back four centuries. 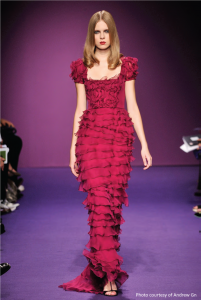 Patterns, hand-drawn in quill and ink, with color samples provided in watercolor paints—their intricate designs sketched in painstaking detail and selected for use in palaces, stately homes, public halls—were recorded and filed. Thus modern-day restorers are able to see exactly what designs and what colors were used in specific venues centuries past. No other silk weaving establishment anywhere in the world can claim as much. In addition to its French premises, Prelle also maintains a showroom in New York at 43 E. 10th Street. Apart from its gilded salons and showrooms frequented by the world’s top designers, Lyon has more than its fair share of stylish boutiques. All along the Rue de la Republique (incidentally, the longest pedestrian street in France), the very latest trends are fetchingly displayed in shop windows. Come early December, Lyon celebrates the Festival of Lights. For one glorious week the town is lighted throughout the night. Music seems to pour from every doorway; mimes, jugglers and troupes of musicians are everywhere. It’s as if the whole city was tripping out on some incredible potion. The restaurants—1,000 of them at last count—do a landslide business, for gastronomy in Lyon is a source of huge civic pride. It’s not for nothing that Lyon is often called the “best-fed” city in France. When I repeated the epitaph to a Lyonnais, he quickly put me straight: “The best-fed city not in France, but in Europe!” So much for local modesty. Then again, it’s no mere coincidence that Paul Bocuse, the high priest of French gastronomy, chooses to live in Lyon, where he presides over two restaurants. A world famous chef who actually cooks? It sounds ordinary enough, but in the tippy-top layers of prize-winning, globally-acclaimed chefs, it’s rare enough to elicit expressions of wonder from fellow chefs. A final word of advice. Don’t journey to the city in search of bargains. It’s doubtful that Lyon even knows the meaning of the word. But if it’s quality you seek, if it’s the full value of every Euro spent, then quite definitely, Lyon may be just the city for you.