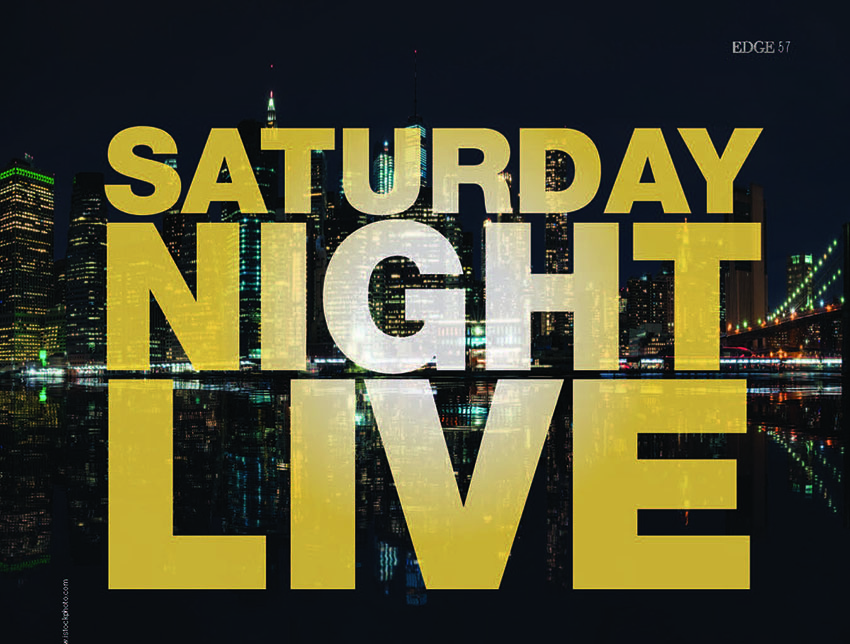 On October 11, 1975, a few minutes past 11:30 pm, Chevy Chase smiled into the camera and shouted, “Live from New York, it’s Saturday Night!” In the 45 years since, the opening sketch—or “cold open,” as it’s come to be known—has deﬁned the program through its highs and lows and ups and downs, cementing its place in entertainment history. The cold open gets its name from the idea that the audience is dropped “cold” into an in-progress story, sometimes with contextual clues or recognizable characters, sometimes not. Often the sketches are warped versions of recent news items,  or merciless send-ups of public ﬁgures, particularly presidents

During the show’s ﬁrst season, the cold opens were the exclusive domain of Chase, who delighted in mocking Gerald Ford’s clumsiness. In the ensuing seasons, other members of the ensemble—along with the occasional guest host—were given the honor of uttering the program’s now-famous opening line. For the record, the ﬁrst non-Chevy opening was given to John Belushi, who famously threatened to betray NBC’s trust unless the network gave in to a list of demands. The ransom idea was recycled from the old National Lampoon stage show and drove home the point that the L in SNL did indeed stand for Live—and that nothing was going to happen until Belushi said it could.

Over the years, SNL’s most popular and elaborate cold opens were based on impersonations of actual people, from entertainers to politicians to regular people who had the bad luck to be in the news that week. And, as Bill Clinton, Monica Lewinsky and countless others can tell you, anything that smelled of scandal was most deﬁnitely fair game. Many of the older SNL cold opens can be difﬁcult to ﬁnd online. However, there are plenty out there to put a smile on your face. These are 10 of our favorites… 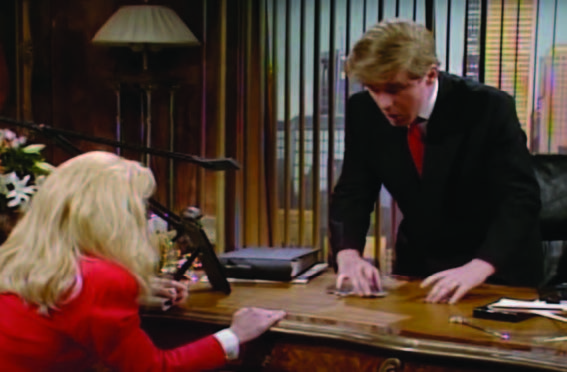 Phil Hartman plays Donald Trump in a divorce settlement meeting with Ivana, played by Jan Hooks. Reviewing the details of their one-sided pre-nup agreement, he informs Ivana that she had unwittingly agreed to receive her $25 million alimony payment in the “giant stone coins of the Yap islanders” which he read about in Ripley’s Believe It or Not. Then “The Donald” beats  her out of that in a double-or-nothing game of three- card Monte. 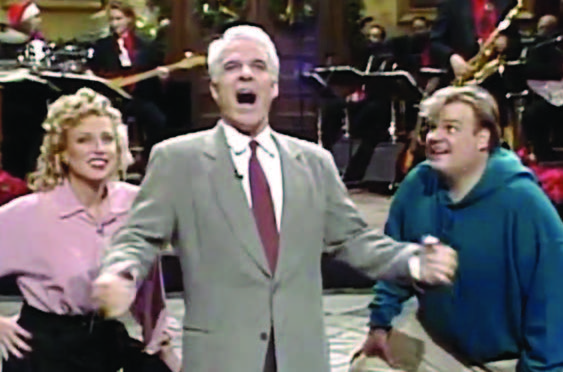 Steve Martin, remembering “when the show meant something, back when I used to care,” stars in a lavish musical number entitled “Not Going to Phone It In Tonight”—addressing criticism that he (along with other hosts and cast members) were guilty of giving less than their best at times. Everyone gets into the act, including Lorne Michaels. The performance concludes with Martin staring into the camera and saying, “Live from New York…” and then calling “Line?” It’s Martin at his best, and maybe SNL at its best, too. 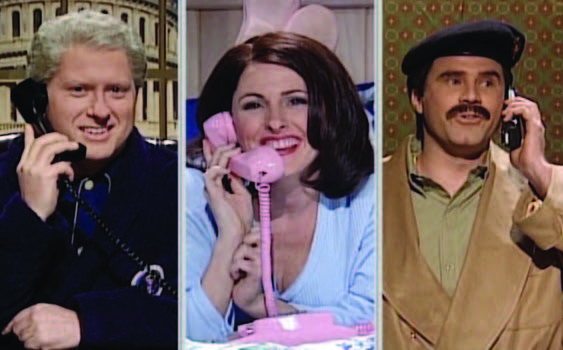 Bill Clinton (Darryl Hammond), Monica Lewinsky (Molly Shannon) and Saddam Hussein (Will Ferrell) engage in a smart-silly party line call. The show had a lot of fun with the Lewinsky scandal, but adding the Iraqi despot to the mix as an SNL host wannabe was a stroke of genius. And who knew Saddam’s beret was a gift from Monica? Or that he could do a Jimmy Stewart impression? Tim Meadows pops in as a fourth wheel. 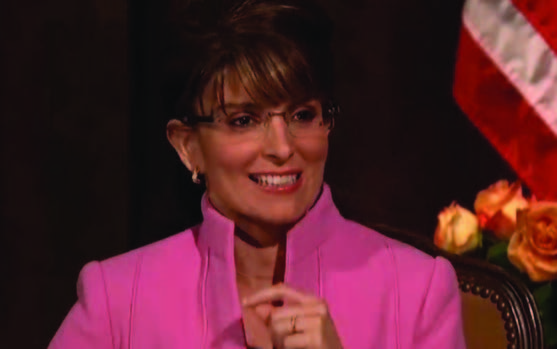 Among the many Sarah Palin send-ups Tina Fey performed during the 2008 presidential campaign, the best was the recreation of Palin’s disastrous interview with Katie Couric, played by Amy Poehler. The biggest laughs were reserved for lines that were barely altered from the original CBS Q&A. 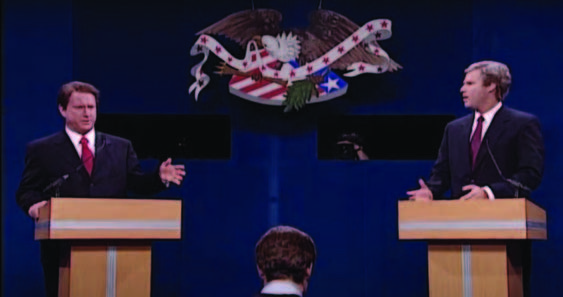 The real-life Bush–Gore presidential debate didn’t do Al Gore any favors. He was dreadful. Darryl Hammond captures this performance perfectly—so much so that Gore’s staff actually made him watch it. On the other side of the aisle we get to meet Will Ferrell’s “Dubya” and learn a new word: Strategery.

Quincy Jones (Keenan Thompson) presents “We Are the World III”—a music video to raise awareness for the disaster that was “We Are the World II,” the well-intentioned but poorly executed fundraising project for Haitian earthquake victims. Jennifer Lopez plays Rihanna, leading the cast in hilarious send-ups of contemporary pop artists. Thompson’s Quincy closes the opening with: “Hmm…that was pretty bad, too.” 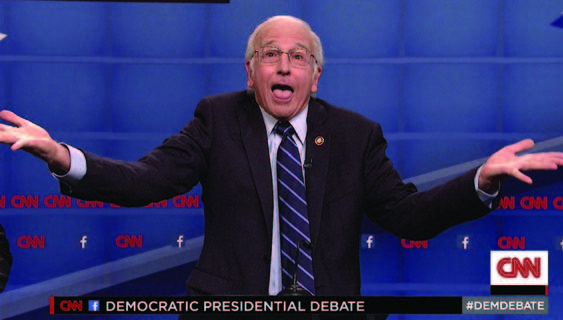 Larry David’s unforgettable debut as Bernie Sanders steals the show, but Kate McKinnon was never better as Hillary Clinton. Bernie’s rant about what’s wrong with banks—including chaining all their pens to the desks—is a classic. His best line: “I don’t have a Super PAC. I don’t even have a backpack.” Hers: “I think you’ll like the Hillary Clinton that my team has created for this debate.” 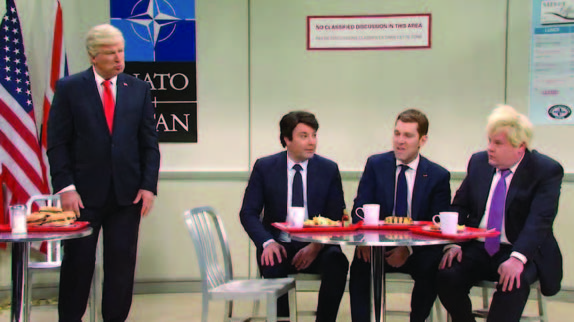 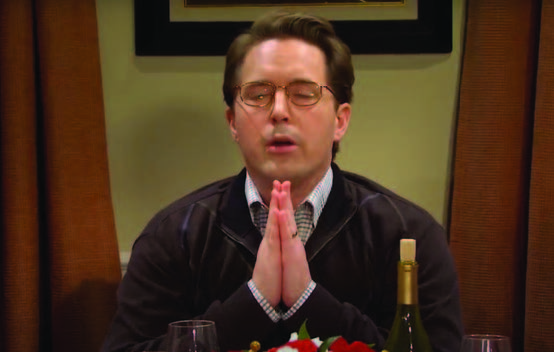 It’s holiday season and we eavesdrop on three family dinners where politics are on the table…in a liberal home, a conservative home and an African-American home. The writing is brilliant and biting and uncomfortably close to the bone. 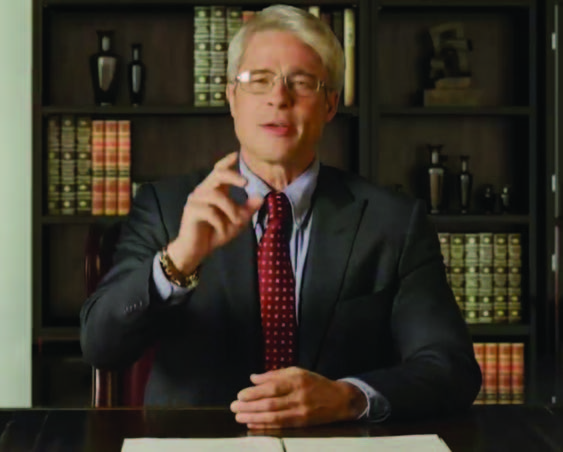 Brad Pitt, the actor Dr. Anthony Fauci joked that  he’d like to play him, plays him in the midst of the  COVID-19 crisis. After walking back some of the president’s confusing public statements as Fauci, Pitt removes his silver hairpiece and thanks the medical workers and ﬁrst responders and their families for being on the front line.

Editor’s Note: Did we miss your personal favorite SNL cold open? Go to the EDGE Facebook page and post a link. It’s a good time and place to share a laugh.