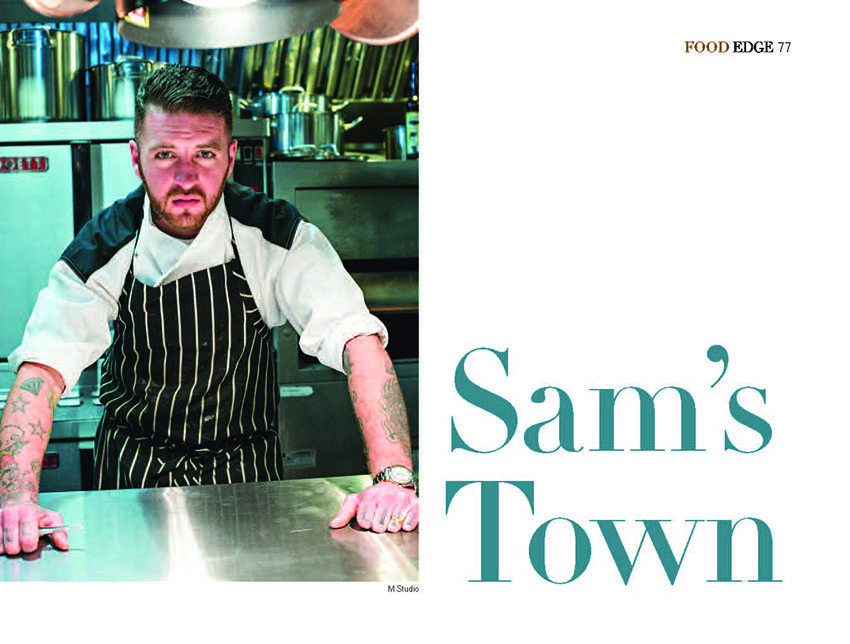 Starting around mid-May every year, the Jersey Shore witnesses a wondrous mass migration, as hungry visitors glide in for a meal or two before picking up and heading north. Just to be clear, we’re talking about people (not birds). For generations, residents of landlocked Northern and Central New Jersey have ﬂocked to the beach towns in search of memorable dining experiences. In the old days, that translated as lobster, fried shrimp, steamers and pitchers of beer. To be sure, fresh seafood and water views are still staples of Jersey Shore dining. However, a handful of talented chefs are breaking this mold by creating innovative, important menus for those with greater expectations.

Which explains, at least in part, what Sam Byrne is doing in Asbury Park at Cross & Orange. Byrne, a native of Ireland, began working under some of Europe’s top chefs as a teenager in a career that included two years in Spain at El Bulli (regarded by many as the ﬁnest restaurant in the world) and stints in London and Paris. He arrived on our shores in 2011 with the goal of opening a restaurant that reﬂected the most outstanding elements of American culture and cuisine.

“My background in Europe opened doors to wherever I wanted to go,” says Byrne. “I came to the U.S. because I wanted a change, but also to create something totally new.”

According to Byrne, the Cross & Orange menu celebrates the remarkable diversity, work ethic and ambitions of 19th century Manhattan, paying homage to the “makers and doers who built the country.” The restaurant’s name references two of the streets that made up the notorious melting pot of New York’s Five Points neighborhood. As a tribute to that era, Byrne and his kitchen staff make everything from scratch, and delight in working unexpected ingredients into every menu item.

The owners of Cross & Orange, brothers Chris and Bob Fahey, grew up in the restaurant business. They worked in a number of bars and restaurants in the City and earned their spurs on the Jersey Shore with Edgar’s Pub in Manasquan, and at trendy Asbury Lanes, a few blocks away. They opened Cross & Orange in February on Cookman Avenue, the epicenter of Asbury Park’s culinary renaissance.

Initially, the brothers’ ambition was to up their game and stake their claim in the town’s red-hot restaurant scene. The ﬁrst step was to secure a prime location, which they did, in the old Park Overlook building—which, as the name implies, overlooks a park (Lincoln Park). Next it was time to secure the services of a ﬁrst-rate chef.  So they ran an ad. Their goal was to be extremely selective and ﬁnd someone young, creative and ahead of the trends. Someone who, as Chris puts it, “would give us an identity.”

“When we ﬁrst met Sam, our expectation of a chef was here,” Bob recalls, putting his hand at eye level.

“What we got,” says Chris, raising his hand a foot above his head, “was here.”

Byrne says he was being equally selective. He had come to Monmouth County to help a friend open a restaurant and was blown away by what was happening in Asbury. Initially, he had planned to work in Manhattan. “But as soon as I saw the building, I signed,” he says. The space is arguably the best in town in terms of its layout and energy. A long bar rises a few steps above the dining area, which is open to the adjacent park, about a three-minute stroll from the boardwalk.

Assembling the Cross & Orange menu was a collaborative effort. The Faheys wanted a place people “would feel comfortable coming to twice a week” as opposed to a destination restaurant, yet one that addressed Asbury Park’s ever-ascending taste and sophistication. They made big investments in stafﬁng; the service is friendly and professional (several waiters have managed restaurants themselves), and the kitchen is driven and motivated. As for Byrne, his marching orders were clear: “Gears-forward, no holding back.”

Not surprisingly, it is the food at Cross & Orange that sets it apart. Bring your appetite and, just as important, your reading glasses, because it’s the small print under each menu item that demonstrates Byrne’s creativity and commitment to quality. The ingredients, he says, are the best he can buy, and there are always specials on the blackboard perched above the dining area.

“The meats are always prime, the lamb is from Colorado, the octopus is fresh from Portugal,” he says. “Now we move into summer, my favorite season, so I get to play off the shore with different types of ﬁsh and light dishes.”

“Sam learned the styles of the masters and developed his own way of cooking and presentation,” says Chris Fahey. “Once he earns the trust of our customers, we see them coming back to explore more of his cuisine—sometimes returning with a bigger group, or sometimes coming alone and ordering a couple of appetizers at the bar.”

Among the more intriguing starters are charred octopus, hand-cooked with a blowtorch and set on a bed of mizuna, olives and oregano; sashimi tuna tartare with pistachio and cucumber; PEI mussels with chorizo and barlotti beans in a minestrone broth; and a smoked bacon and watermelon salad featuring daikon, radicchio, chili and pork belly.

Meat entrees range from a 60/40 burger topped with garlic spinach, red onion jam and gruyere to an herb-crusted rack of spring lamb, and include all manner and size of steaks, both on the menu and on the specials board. Roasted Chilean sea bass, Nordic cod and other seafood specials are extremely popular. If Dover sole happens to be available, dive right in.

Editor’s Note: Cross & Orange is located at 508 Cookman Avenue. Summer hours and days of operation are posted at crossandorangeap.com. The restaurant is extremely busy on Fridays and Saturdays, so call for reservations as far in advance as possible at (732) 361–5502. Street parking in the summer is nearly impossible, so ask about nearby garage options when you call, even if you’ve booked through Open Table.