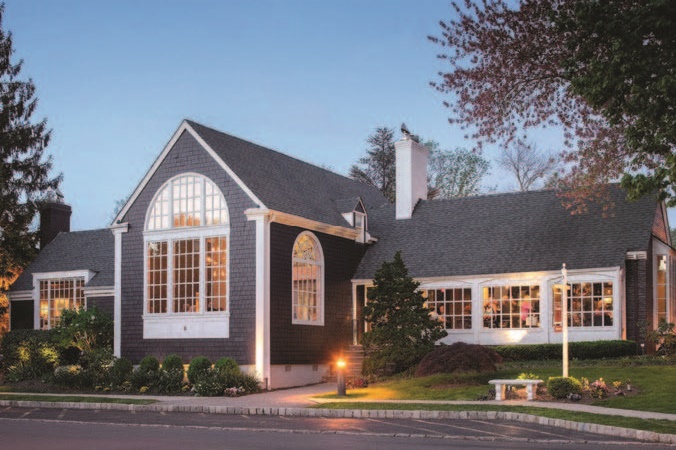 “Laird loves duck, a food he knows most folks do not make at home and, as such, is a celebratory dish.”

Elegance doesn’t become every restaurant that opens its doors to the public. But it has been the guiding force behind Restaurant Serenade since its birth in 1996, two years after its owners, James and Nancy Sheridan Laird, met and fell in love in the kitchen of the Ryland Inn and knew that, together, they had what it takes to create the kind of forever-classic Balanchine did by putting mind and body to the music of Tchaikovsky.

Twenty-five years ago, I did a stage at Ryland for a story I was reporting for the Asbury Park Press. I saw then-sous chef James break concentration only to steal a glance at Nancy, an extern from the CIA who’d left a successful career in finance to pursue a passion for all things culinary. Nancy, laser-focused on learning and little interested in offering comments for my story, only eked out an observation at the end of my stage, by noting how impressed she was by James’ talent and skill, leadership and devotion to serving exquisite food.

As EDGE marks its 10th anniversary, I could think of no finer restaurant to profile in commemoration of that achievement than Restaurant Serenade in Chatham, which has been the scene of thousands of anniversary toasts since the Lairds decided to create a restaurant that brought elegance to every aspect of the dining experience—and made it accessible and welcoming, to all.

It’s a Saturday night, and Serenade is packed. There’s a private party in The Loft, the tables in the dining spaces are taken by couples, by small groups, by the fortunate who’ve scored a babysitter, and the high-tops in the bar are tete-a-tete central. It’s a festive and comfortable scene. It’s also something of a bargain in the highest end of the fine-dining spectrum, with the regular weeknight bill of fare giving way to an across-the-board $73-per-person fixed-price three-course menu. It’s aimed at showcasing, on the busiest night, what 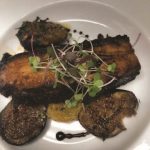 James, the chef, and Nancy, who manages the restaurant and oversees front-of-house operations, made their mission when they opened Serenade 23 years ago this fall: beautiful foods in the Mediterranean style, fresh, seasonal, light of touch and yet deeply layered with flavor.

Keep the calculations coming by digging into halibut whose sear is capped by a sliver-slice of tomato that melts into the fillet and links it to quenelle-shaped mounds of ratatouille, verdant beans and peas, and the sultry spray of a sun-dried tomato vinaigrette. Very Provencal, very clean, very easy to eat…as was a roasted rack of lamb, bones playfully akimbo, served with pert cylinders of smashed-potato strudel and a crown of broccoli. Here, there was the counterpointing underpinning of piquant chimichurri and smolderingly sweet oven-dried tomatoes, accents at once light and potent. Laird loves duck, a food he knows most folks do not make at home and, as such, is a celebratory dish. He gets his duck from Pennsylvania, riffs on it seasonally, but always follows a low-and-slow roasting dictum for his Saturday night special. On this particular night, he’s taken a honey glaze scented with coriander, cumin and white pepper that tames slightly the richness of the duck and seeps happily into—for one example—risotto. 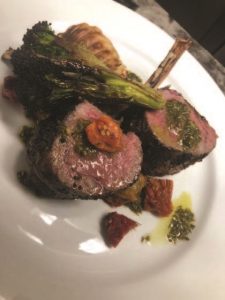 The Lairds always have been patrons of New Jersey’s farms and food artisans and are quick to name, on the menu and in conversation, those whose produce and products inspire and frame Serenade’s cuisine. It’s no surprise, then, that the pitch-perfect peach cobbler gives top nod to Melick’s Town Farm in the nearby village of Oldwick in Tewksbury Township and that both Nancy and James speak of patriarch George Melick, his wife Norma, and their three now-middle-aged children, Peter, John, and Rebecca, as the prime source for much of the produce they use. If you’re in search of something non-fruit in the finale department, there’s a chocolate tart served warm and made memorable by a pecan crust, or if you cotton to a Southern-style stately cake, the coconut number has a debutante’s posture and a scoop of cantaloupe sorbet, to boot.

At the end of our dinner, James Laird stops by our table. He hasn’t aged a day in the 25 years since we first met at Ryland, but it’s been quite a few years since I’ve seen and spoken with him. I can’t help but noting he’s the human fountain of youth. James insists it’s the food. “It’s just eating well,” he says, then takes note of the local farmers and foragers who are so much a part of the night’s menu. He heads back to the kitchen. 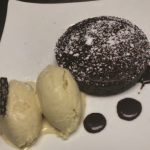 As we leave, the gorgeous and gracious Nancy Laird is saying goodnight to diners. I wait a minute so I can ask about the fabulous orange chairs in the dining room. She smiles broadly, then asks, “Did you see the wallpaper in the women’s room?” I take off for points private. It’s the most amazing splash of color and composition, floral and bold and absolutely fun. Nancy assures me the men’s room has an exciting paper backdrop all its own.

I’m not much for oohing and ahhing over décor in restaurants, but I need to know about this wallpaper. “It’s from Brooklyn,” she says. “Made by Flavor.”

“Yes,” Nancy says. “Flavor is the name of the company.”

Of course, it is. Of course, Nancy and James Laird, and Restaurant Serenade, would have wallpaper from Flavor.

A couple of days after our dinner at Restaurant Serenade, I spoke with Nancy and James Laird by phone to ask them a few questions. Mostly I wanted to know, after marking so many years in a competitive industry, how they keep the magic going. 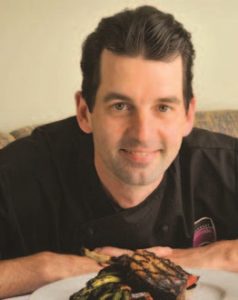 James: I think we keep the magic by keeping the restaurant fresh. The restaurant is ours, the chef will never leave, but we can change little things to keep it fresh.

Nancy: Wall sconces, for instance. James: Every time we spend a little, we get busier. When I was 18, 20 years old [and cooking in a restaurant] in France, there was a chef who’d been there 27 years, just as dedicated. Nancy and I keep the magic in marriage, as well as the restaurant—we figured out what she’s good at and what I’m good at.

James: Most are married, with kids, so we feel like we’re responsible for feeding about 100 mouths! They work hard for us. 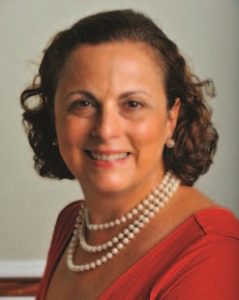 James: We like what we do; we like to make people happy. I think I’ve become a better person, more humble.

Nancy: Part of the reason we do this is the community. Most of our friends, we’ve met through this community. We’ve looked at other spaces, but we have a really nice life here. I feel like we were meant to do this restaurant and do it really well.

James: In my opinion, I’d rather do one, and do it perfectly. You know, we don’t do VIP—every one is treated the same way. Recently, we had a couple come in, a freshman in college and a senior in high school. They were celebrating their six-month anniversary. We went over to them, we gave them more attention than anyone.

James wants to add one more thing before we sign off. His youthful looks? “It’s love,” he says, as I imagine him glancing at Nancy much as he did the first time I saw him. “Love keeps you young.”