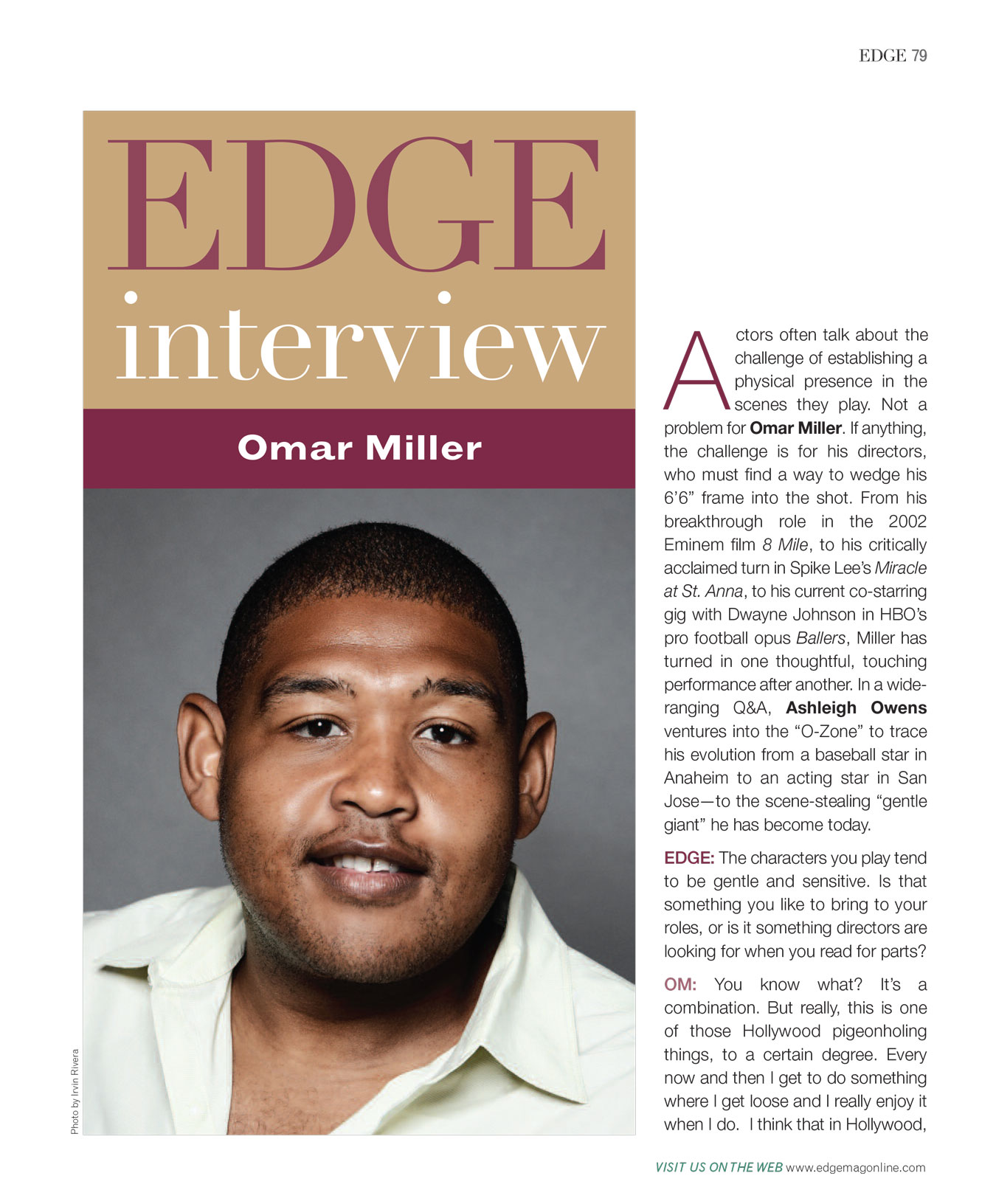 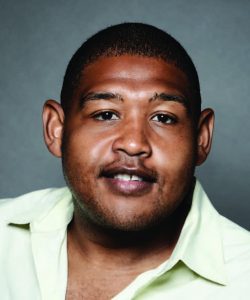 Actors often talk about the challenge of establishing a physical presence in the scenes they play. Not a problem for Omar Miller. If anything, the challenge is for his directors, who must ﬁnd a way to wedge his 6’6” frame into the shot. From his breakthrough role in the 2002 Eminem ﬁlm 8 Mile, to his critically acclaimed turn in Spike Lee’s Miracle at St. Anna, to his current co-starring gig with Dwayne Johnson in HBO’s pro football opus Ballers, Miller has turned in one thoughtful, touching performance after another. In a wide-ranging Q&A, Ashleigh Owens ventures into the “O-Zone” to trace his evolution from a baseball star in Anaheim to an acting star in San Jose—to the scene-stealing “gentle giant” he has become today.

EDGE: The characters you play tend to be gentle and sensitive. Is that something you like to bring to your roles, or is it something directors are looking for when you read for parts?

OM: You know what? It’s a combination. But really, this is one of those Hollywood pigeonholing things, to a certain degree. Every now and then I get to do something where I get loose and I really enjoy it when I do.  I think that in Hollywood, when they ﬁnd one of your characteristics or traits that resonates with audiences, they continue to use you in that capacity.  It’s not necessarily a bad thing. It’s just that you like to show other wrinkles from time to time. So, with me, people seem to love a giant dude that is also very gentle. It’s been an interesting element in my career. 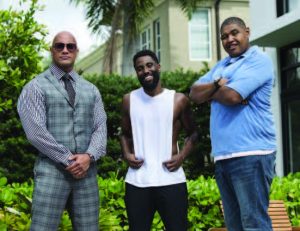 EDGE: Where does that pigeonholing come from?

OM: If you watch movies and television, I’m deﬁnitely not the pioneer in the “gentle giant” space. It’s just a position that those audiences and creators like. They like the idea of contrast, and when you have a person who is eligible and able to do a lot of physical damage—yet takes extreme care and sensitivity—there’s something interesting about that.

EDGE: Did you have a particular moment where you said, “Hey maybe I can make a living as an actor?”

OM: Actually, I was still an audience member when I had that light bulb moment.  I was in college at San Jose State watching Homeboys in Outer Space and I was like, Wow. I could do this. I was done playing baseball and was trying to ﬁgure out what the next step in my life was going to be. And thank God that I found acting, got into theater, and ran into wonderful professors who helped me hone my abilities and understand what the craft and skill set actually is of performance. Things have really fallen into place. I am blessed.

EDGE: I know that during my own college career, theater class was something I was able to jump into and I found it to be an enjoyable subject.

OM: I feel like it’s an exploratory thing—anyone can take a theater class. I know my ﬁrst theater class was a General Education class, and part of the reason it was offered as a G.E. class is because theater can help you in other areas of your life, no matter what it is. It just makes you more self-aware, able to speak in front of people more comfortably and get your point across. There are a lot of things that theater can teach everybody.

EDGE: How does it feel to combine your dual passion for acting and athletics?

OM: It’s cool because both areas are so captivating in society right now. One of the things that I love about being an actor is that it gives you access to so many different worlds. The world of sports is something I know a bunch about. So, when you combine that with the actual performance, it adds a little bit.

EDGE: Is that something you’ve discussed with your Ballers co-star, Dwayne Johnson?

OM: No, not really. Those connections are obvious. With his background as a professional football player at one point, doing a show about football has a special place in his heart.  A guy like Dwayne is living such a bizarre life compared to what regular people know about. That’s one of the things that’s great about him—he’s able to keep a level head despite the heights he continues to rise to.

OM: We’re putting out material that can give people a sneak peek into the world that they’re interested in, but may not actually know much about. I think the show gives a good inference into the world of sports and ﬁnance, the excess that can happen, and how easy it is to get caught up in that and lose yourself, your soul, your morals and mind. I love that it entertains people, but also helps them to understand that the people they idolize are real people as well. 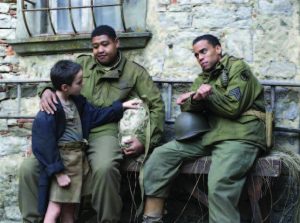 40 Acres and a Mule Filmworks/Touchstone Pictures

EDGE: You played a World War II soldier in Miracle at St. Anna and obviously you didn’t have military experience. How difﬁcult was it for you to convey the terror of warfare—what did you draw on?

OM: I spoke to one of my uncles, who was a Buffalo Solider and is still alive. I spoke to him about the experience and what it was like to be an American, then to go to Europe at the time, and the different ways you were treated, and then also be literally facing the Nazis. I did a lot of research for that role, and I had to lose 75 pounds. I shot that ﬁlm at the end of the summer, right after I made a movie called The Express, where I played an offensive lineman who was a very, very big dude. It was drastic—there was a lot that went into getting that role. To date, it’s still my favorite thing I’ve ever done. 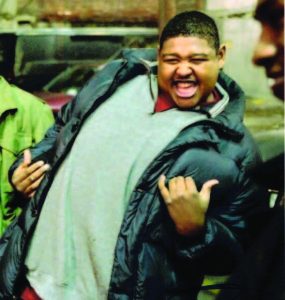 EDGE: How did Spike Lee get what he wanted from you as an actor?

OM: The beauty about Spike is that he knows what he wants out of making his ﬁlms. You have the conﬁdence of a veteran to understand what it is that he’s going for, so there’s not a lot of confusion about what he wants from you as an actor. I got along well with Spike because he’s a master at capturing your performance, and as an actor, he makes it very clear that it is your responsibility to craft the performance. What he’s going to do is capture the performance. And I was able to really beneﬁt from his structuring.

EDGE: How did the ﬁlm impact your life?

OM: It opened me up to my own popularity worldwide. And also to travel. The majority of the ﬁlm was shot in Italy. And in that respect, a beautiful thing took place. I started to grow. Ever since I made that movie, I’ve gone to Europe once a year, every year. Miracle at St. Anna also opened me up to more opportunity, because Spike selected me for the ﬁlm. Whenever you’re directly working alongside Spike, and he gives you that stamp of approval for using you, it’s a good feeling. You’ve grown up watching this man and his ﬁlms and you can deﬁnitely see why he’s great at what he does. My favorite ﬁlm is Mo’ Better Blues. It was a great experience to sit on set and get to talk to him about it.

EDGE: You also had the opportunity to work with Eminem in 8 Mile and, a couple of years later, 50 Cent in Get Rich or Die Tryin’. How do they compare?

OM: It was like night and day! Both of them were extremely popular. Eminem is very introverted and 50 is very extroverted. 50 is like your friend that won the lotto. Eminem is somebody that isn’t made for that massive attention.

OM: Be persistent and make your own stuff. Nowadays, there’s so many different outlets. Someone, somewhere wants to see what you create…but you have to create it for it to be seen.

: Ashleigh Owens is the daughter of the late Tracey Smith, EDGE’s longtime Editor at Large. Ashleigh’s conversation with Omar Miller also delved into the craft of acting and his love of sports. Log onto EdgeMagOnline.com to read more of their Q&A.