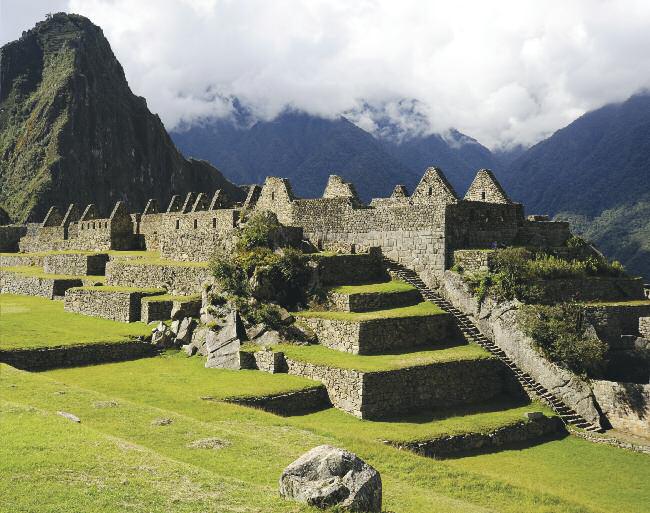 We instinctively seek a paradisiacal and special place on earth…because we know in our inmost hearts that the earth was given to us in order that we might find meaning, order, truth and salvation in it.” So wrote Thomas Merton, a Trappist monk who was a lifelong seeker of just such paradisiacal and special places. There are times when we deliberately journey to a “special place” in search of spiritual fulfillment. Humankind has been making such journeys since the dawn of time. We call them pilgrimages.

But then there are times when we come across places that have been invested with spiritual significance by people whose beliefs seem worlds apart from our own. Such times are rare and much to be valued, for none of us can know in what place and at what time in our lives we may be touched by a presence well beyond our understanding.

In the ancient Andean language of Quechua (spoken by the Incan people long before their subversion by Spanish conquistadores), Machu Pichu means Place of Peace and Power. Today, the rocky remains of what once was a thriving holy city draw scholars from all over the world. They come intent on broadening their archaeological knowledge of pre-Columbian life in the New World. The hillside ruins, located at an altitude of 9,000 feet in the Vilabamba range of the Andes, overlook the Urubamba River. This dramatic site comprises Peru’s most visited tourist attraction. But to the descendants of the Incan peoples, whose forefathers constructed Machu Pichu, the gray granite rows speak with a powerful eloquence of a long-ago grandeur and puissance, when the Incan Kingdom embraced an area larger than the Roman Empire. So ingeniously was Machu Pichu constructed that even though some of the stones weigh more than 50 tons, it is not possible to insert the very thinnest of knife blades between one stone and another.

The ancients among the local Indian people repeat the legend as it was told to them: The sacred Intihuatana Stone, focal point of Machu Pichu, is recognized as the hitching post of the Sun. Twice a year, at the summer and winter equinoxes, it is poised on the tip of that sacred stone. It’s a moment that bespeaks the dependency of the people on the life-sustaining power of the sun. In the thin clear air of Machu Pichu, even the most indifferent of visitors is aware of a force that is as vital a presence as the ancient granite stones themselves.

In southern Honshu, in Japan’s Mie prefecture near the city of Ose can be found what many Japanese consider the most sacred place on earth. It is called the Ise Shrine. Its spiritual powers date back as far as 680 A.D., to the time of Emperor Temmu. This Shinto place of worship, meditation and healing stands amidst an ancient forest of Japanese cedar. Even the surrounding trees themselves are thought to be invested with a life-affirming force. The mystic powers, so reverently sought by visitors—be they Shinto or Christian, Buddhist or Confucian—are evenly divided between the Inner Shrine and the Outer Shrine. The Ise Shrine, beloved by millions of the faithful, embraces a belief rooted in wabi-sabi which holds that all things tangible must inevitably be impermanent. This conviction is dramatically reaffirmed every 20 years by the total dismantling of one of the sacred structures. Once dismantled it is ceremoniously rebuilt on an adjacent sacred piece of land in strict adherence to techniques and designs laid down many centuries ago. It is a powerful reminder of human mortality and the necessarily transient nature of life. 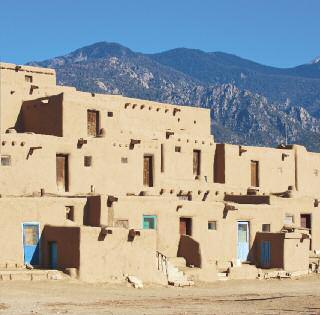 High in the snow-capped peaks of the Sangre de Christo mountains, above Taos, is the Blue Lake, a natural wonder of inestimable beauty. It’s a sanctuary sacred to the Pueblo Indians. In 1906, Teddy Roosevelt decreed that the Blue Lake and its surrounding woodlands should be incorporated into the nation’s national park system. But the local Pueblo Indians took exception to TR’s ruling. The lake, they declared, was sacred—and had been recognized as such since long before white men ever set foot in the region. Furthermore, it was the dwelling place of Great Spirits. To open the area to park visitors would be a sacrilege. Theirs was a long and often seemingly hopeless battle.

On December 15, 1970, Richard Nixon, with the approval of Congress, restored Blue Lake and 48,000 surrounding acres to be henceforth and forever private Pueblo Indian property. Today, it can be visited only with permission of Pueblo authorities. On rare occasions outsiders may be invited to attend sacred rituals performed at Blue Lake. Those fortunate enough to have attended these rituals attest to the mystical powers of the lake.

Because the diminutive town of Ekuphakameni in the Natal province of South Africa is the burial place of Isaiah Shembe, it is venerated as a shrine by members of the Shembe faith. Shembe was a Zulu. In the Zulu language, Ekuphakameni means Place of Spiritual Uplift. It was in 1916 that Isaiah experienced divine revelation, which inspired him to found the Shembe Church. Today, Shembe is regarded as the largest independent, indigenous church in all of Africa and counts more than three million members, most of them Zulu. Shembe teaches peace, healing and a deep reverence for all living things, both plant and animal. At the beginning of every new year, 20,000 barefoot pilgrims, dressed in white robes, make a three-day pilgrimage along an 80-miles route to Ekuphakameni. Religious observances last a minimum of three days and consist largely of hymn singing and the performing of age-old dances. Unlike many African religious rites, the Shembe worshippers invite visitors to participate or, if they prefer, simply to observe. Everyone without exception is welcome and is accorded the high level of hospitality which is such a scrupulous principle of the Zulu people. 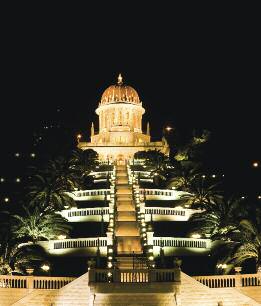 The Baha’i Hanging Gardens in Haifa constitute one of Israel’s most visited tourist attractions. They have been designated a UNESCO World Heritage Site. The Gardens are dedicated to the 19th century founders of the Baha’I Faith and, as such, are revered as the spiritual center of that Faith. Yet people of any faith (or of no faith whatsoever) are welcome to visit all year round. Built in a series of terraces on the slopes of Mt. Carmel, they are generally conceded to be among the most spectacular gardens in the world. They attract garden-lovers, botanists, landscape designers and students of many disciplines.

The Baha’i, who are independent of both Christian and Judaic teachings, believe in a God who seeks to enlighten all people through his prophets or messengers, among them Moses, Abraham, Zoroaster, Krishna, Buddha, Christ and Mohammed. They view all prophets to be of equal significance, though divinity is ascribed to none. The Baha’i hold that life is synonymous with the obligation to seek truth through the study of religion, science, the arts and public service. Baha’i Faith teaches the oneness of all people, undivided by race, language, or gender. The religion was born in 19th century Persia as monotheistic, eternal, without beginning or end. Its leaders have long suffered persecution at the hands of Islamic leaders, who hold the Baha’i to be apostates. Although the Baha’i Faith is well established in 247countries around the world, and its teachings have been translated into hundreds of languages, its primary center is in Haifa. 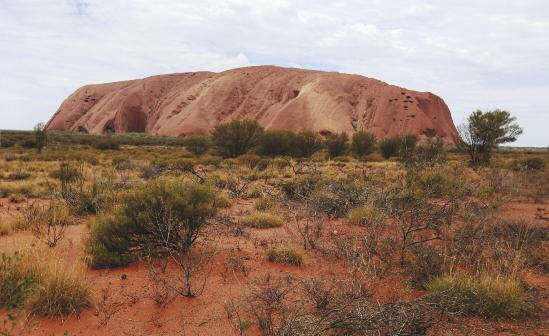 In Australia, the area best known to tourists as Ayers Rock has been considered sacred by the Aboriginal peoples of that country since the dawn of time. The rock is honeycombed with caves that are covered with Aboriginal paintings. Located in the center of Australia, southwest of Alice Springs, it was given the name of Ayers Rock by the first European explorers who knew nothing of its sacred connotations. Ayers Rock stands in the center of the Uluru-Kata Tjuata National Park, which covers 512 square miles. The rock itself is 1,141 feet high. A steep one-mile trail enables visitors to climb to the rock’s summit.

To those who hold Ayers Rock sacred it is known as Uluru. The beliefs that are ascribed to Uluru are integral to what is called The Dreaming—which holds that the spirits of human ancestors came to earth to create the land and all its features. Once their work was completed, those same spirits remained and changed from human form into stars, sunsets, rocks, rivers, shrubs, trees, stones and animals. As such they are ever-present. For Aboriginal believers, The Dreaming is never-ending, linking the past and the present, the people and the land; all that is sacred is in the land.

Knowledge of sacred sites is learned through initiation and the teaching of Aboriginal law. It is, by definition, not public knowledge. This is why the existence of many sites might not be shared with the wider world, lest they be violated. The Aboriginal owners of Uluru call themselves Anangu and ask visitors to do so, too. 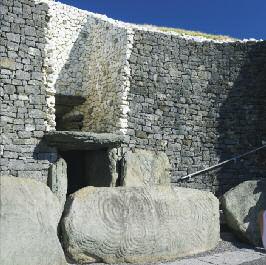 One kilometer north of the River Boyne, in County Meath, one of Ireland’s most sacred sites can be found. Newgrange, historians theorize, was built about 3200 BC, during the Neolithic period. It predates Stonehenge and the Egyptian pyramids. Visitors today view a large circular mound faced by a stone retaining wall. A stone passageway penetrates into the interior of the mound, with numerous chambers opening off the main passageway. Its exact origins are shrouded in mystery. There is no consensus about the type of rites enacted within and around the mound, although all agree that they were of religious significance. The mound is aligned with the rising sun and its light floods the interior chamber on the winter solstice.

For reasons unknown, the entry into the mound was closed and sealed for many centuries and was only re-discovered in the 17th century. Allusions to the mound are found in Irish mythology and ancient folk tales. Despite the obscurity that surrounds the origins of Newgrange, it bears a striking resemblance to Neolithic sites found in Scotland, Wales and other part of western Europe. In the 1970’s, controversial reconstruction was undertaken that redefined the entryway into the interior. The authenticity of that reconstruction remains, to this day, a source of endless debate among historians. Yet archaeologist Colin Renfrew writes that Newgrange “is long unhesitatingly regarded by the prehistorian as the great national monument of Ireland.”

Once every 12 years, Hindus from all over India congregate in Allahabad, at the confluence of the Ganges and Yamuna Rivers in the northern state of Uttar Pradesh. They come to celebrate the Kumbh Mela Festival, which coincides with the alignment of Jupiter and the Moon. Hindu scripture teaches that, at this time, anyone bathing in the river waters will receive a blessing that can be passed down from one generation to another. Kumbh Mela translates roughly as fair pitcher; it is said that Allahabad (which is also known as Prayag) is one of four places in the country where drops of nectar once fell from the pitcher carried by Hindu gods.

During the 55 days that the festival lasts, countless millions journey to and from Allahabad to partake in the festivities. And countless is exactly the right word here; no one has a clue even how to tally the mass of humanity involved. One thing can be said with absolute certainty, however: Kumbh Mela is the largest gathering of religious pilgrims on the face of the earth.