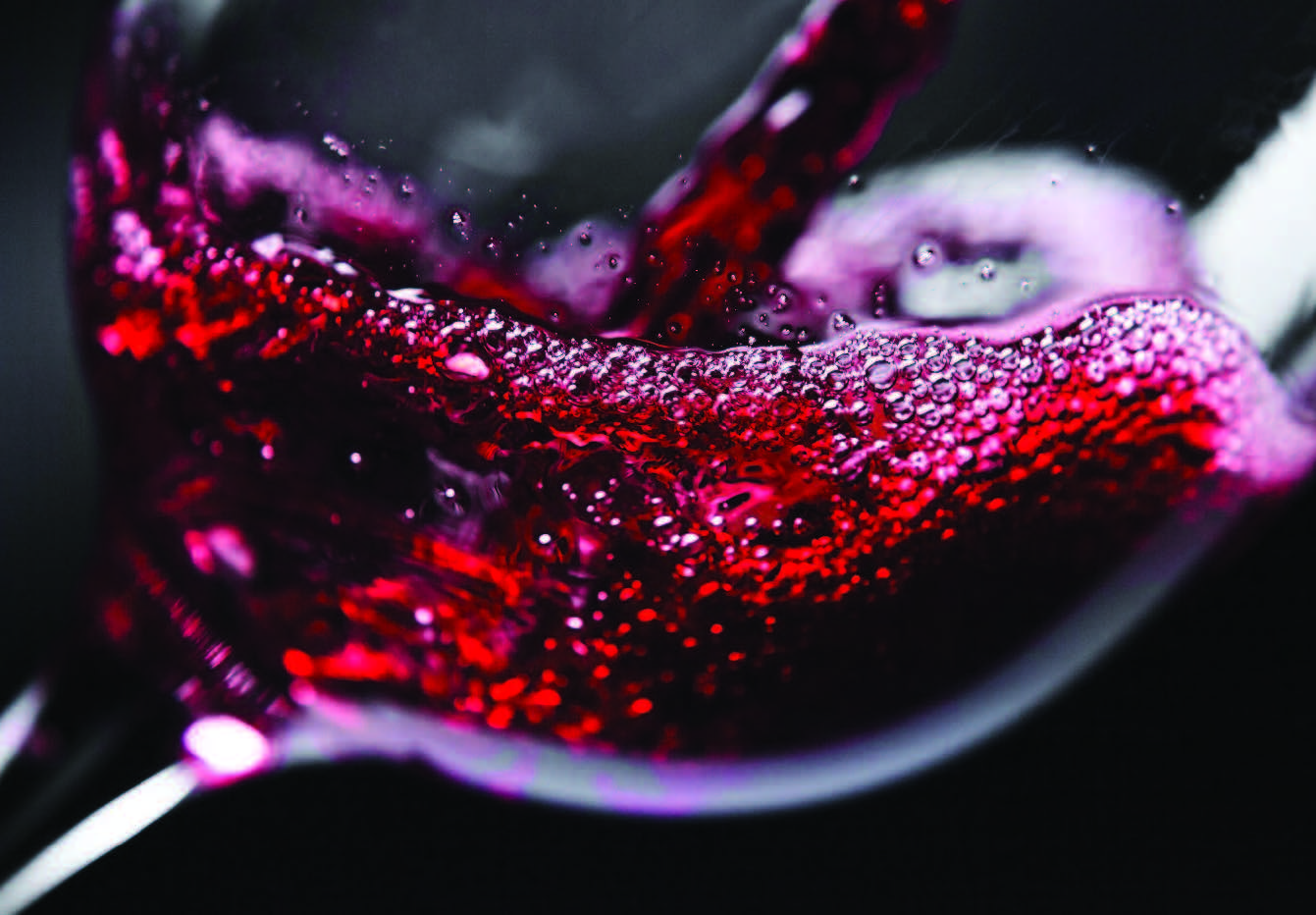 A loving look at the science of wine.

The wide appeal of wine encompasses devotees along a remarkably broad spectrum. From the ordained Court of Master Sommeliers to the masters of the supermarket special, wine has the capacity to leave an indelible imprint on the human mind. No wonder people like me can wax on endlessly about the aromas and ﬂavors from our favorite gulp. To non-oenophiles, this may seem like so much inside baseball; they wonder, isn’t it enough that it tastes and smells good? Yes, of course it is. But that’s not what drives the wine industry, and certainly not what reafﬁrms our interest each and every time we open a bottle and drink the night away. Perhaps the better question is, “Is there any science behind this phenomenon?”

The answer is Yes. Indeed, chemistry has given us a whole new set of toys to play with to deﬁne what it is that we love so much about wine. 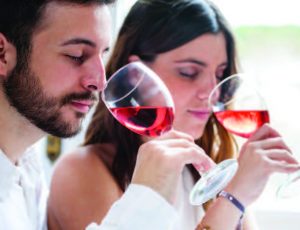 As we begin to nose (or smell) a wine, there are primary aromas from grapes, both fruity and ﬂoral. Secondarily, aromas arise from fermentation. These are called esters. In young wines, these esters impart pear and banana characteristics. If the wine has undergone malolactic fermentation (where the grape’s tart taste mellows to a softer-tasting lactic acid), battonnage (a stirring of dead yeast cells and other particles that remain in a wine after fermentation) and oaking (which adds aroma compounds to a wine) extracts enter the picture with creamy diacetyl and woody vanillin aromas. Finally, there are tertiary aromas from the aging process. Wines typically contain some dissolved oxygen, but if they are barrel-matured, they absorb additional oxygen. All this leads to what is considered beneﬁcial oxygenation with the formation of aldehydes, creating that unique and hard-to-describe signature of a ﬁnely aged wine.

Once in the bottle, maturation changes the volatile compounds. It’s basically an anaerobic process that reduces the oxygen content of the wine. Full-bodied reds need this maturation process to balance out the aromas and ﬂavors that deﬁne this segment of the wine industry. Tertiary aromas are what take us away from simplistic descriptors of wine.

We all know that guy who says something like, “I’m getting hints of saddle leather mixed with Havana cigar, woodland ﬂoor, and autumnal garden.” Well, that guy might actually be dead right. There happen to be over 400 wine odor compounds (many with catchy descriptions) that have been identiﬁed in small concentrations that pierce the olfactory threshold. Compounds in grapes that are precursors of wine ﬂavors include free amino acids, phospholipids, glycolipids, aldehydes and phenols. Alkyl esters, a result of fermentation, are important compounds that give secondary aroma characteristics. Terpenes present in grapes are unchanged by fermentation and therefore contribute to primary aromas. Young wines made from grapes with a high terpene content include muscat, gewurztraminer and riesling. Their nose screams of primary fruit and show overt grape-like aromas. Other compounds unchanged by fermentation include the pronounced black currant or cassis aromas of cabernet sauvignon. 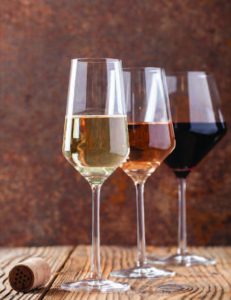 ON THE TIP OF YOUR TONGUE

Relatively speaking, our ability to taste wine is almost a dead end. The tongue can only perceive four sensations: sweetness, bitterness, salty, and acidity. Yes, I know people argue there’s a ﬁfth one, umami—aka a mouth full of soy sauce—but it’s not my thing, so let’s stick to what we do know.

Sweetness can be detected on the tip of the tongue but cannot be smelled. For example, muscat varieties have fragrant and aromatic nose qualities that are reminiscent of sweet table grapes, but the wine, when tasted, may be bone dry. Sweetness perceptions may also be found in higher alcohol levels, and when vanillin is present in oaked wines. Thus, a high-alcohol wine stored in barrel may actually taste sweeter than the actual level of residual sugar in the wine. A technique to understand this is pinching the nose while swirling a wine around the mouth to perceive it’s actual stimulation to the tip of the tongue. Also, the higher the acidity of the wine, the less sweet the wine will be, as acidity impacts the taster’s perception of sweetness.

Residual sweetness in wine is due to fructose, post-fermentation. White wines can contain between 0.4 to 300 grams/liter, while red wines fermented dry lie between 0.2 to 3 grams/liter. However, it is not unusual for New World reds to contain up to 8 grams/liter of sugar to soften any bitterness imparted by phenols. These would not be considered sweet red wines, but rather balanced.

Acidity, often considered the most critical aspect when it comes to tasting wine, is perceived on the sides of the tongue and cheeks as a sharp, lively, tingling sensation. All wines have it—whites greater than reds, cooler-climate wines more so than warmer climate wines. Sugar and acidity in wines are inversely related, so as one goes up the other must come down, and vice versa. The greatest acid present in wines is tartartic acid, although malic and citric acid account for some sizable concentrations. Other acids may be present, including acetic acid (aka vinegar). Acid has the ability to negate sweetness in a wine’s palate, and plays a huge role in dessert wines.

Tannins, another compound found in grapes, also give tactile sensations in the mouth, making the teeth and gums feel furry and dry. They are often a key component in big red wines that offer what is called “grit” and complexity to the taste. Tannins are polyphenols taken primarily from grape skins, but also found in stalks, which impart a greener, harder nature, so whole-cluster wines will have this incorporated into the taste. Oak is another source of tannins, often a more subdued character with a more aromatic side to it.

Tannins bind and precipitate proteins. This is why red wines match so well with meats and cheeses. This combination causes wines containing tannin to congeal into strings, or chains, thus changing our perception of the wine as it mixes with the food proteins. It is often assumed that white wines contain no tannin. This is untrue. They are there, but at lower levels than red wine. White wine is pressed pre-fermentation, and the solids are settled out. Unless there is any period of skin contact post-crush and pre-press, the phenolics in the skins will have a limited impact. Whole cluster pressing may make up some shortcomings on tannins, but typically it is oak aging that gives white wines their tannin character.

Nose and taste are just two of the components we consider when evaluating the quality of a wine. Also coming into play are ﬂavor, balance and length and price. Quality will present itself as an unbroken line of attack on the senses. From the initial nose, followed by the ﬁrst mouth sensation and then on to the ﬁnish, a quality wine will develop and change in the glass and gain complexity as it changes chemically. There will be a clear, individual personality about the wine that deﬁnes its origins and maintains this footprint through repeated tastings. This is the holy grail of wine quality. And quality can be further broken down into two areas of concentration: natural factors and production factors.

For example, climate has a considerable inﬂuence on the quality of wines produced. Cooler regions may not fully ripen grapes and often are subject to considerable variability—producing wines of sometimes questionable quality. Grapes from these regions will produce lower sugar levels and higher acid levels than grapes in hotter climates. Red grapes from cool climates will have weak concentrations of compounds, green tannins and raging acidity. In these regions, chaptalization (adding sugar to boost alcohol content) and deacidiﬁcation (the removal of wine acids prior to fermentation) are often used to make up for climatic shortcomings. Hot regions have their problems, as well. Grapes may ripen quickly, with high sugar levels, yet without time for sufﬁcient ﬂavor development—in essence getting burned out. Growers able to place vineyards in the ideal mix of warm and cool climates will obtain the best of both worlds. This favors ﬂavor development and balance of sugars and acid. Climates that have a large diurnal variation also produce the same outcomes.

The role played by soil cannot be understated in the quality of a wine. The most important characteristic is the ability to control water supply, either by holding or drainage. Quality wine is not produced from poorly drained vineyards. The texture of the soil will affect the vine’s ability to absorb water, nutrients and minerals, and can be altered by preparation and vineyard management techniques, such as the addition of gypsum. Compaction should be avoided to allow oxygenation of the soil. The pH of the soil must also be considered. Though it may seem counterintuitive, vines grown in high-acid soils will produce grapes with a lower acidity than those grown in a low-acid soil.

will increase aromatics of varietals such as sauvignon blanc. Research at the University of Bordeaux has determined that top chateaux in and around Bordeaux have high percentages of acidic gravel and pebbles. These soils are naturally poor in nutrients and deﬁcient in magnesium, due to high levels of potassium. This imbalance contributes to low vine vigor and yields.

I am a transplanted New Jerseyan who teaches a wine course at the College of Charleston, and you just got the chemistry and geology overview. There’s also a “people part” of the class, and it’s just as important to master. Over the millennia, the human species has vastly diminished its smell world. We’ve traded our olfactory acuity for enhanced color vision. DNA coding for olfactory proteins are no longer important for humans, as this sense—as well as taste—are largely restricted to food choices. Our senses are bombarded constantly by a mass of information and it is the higher brain functions that extract from this sea of data the features we wish to zero in on. This is called higher order processing.

Think of all the aromas that bombard your senses from a glass of wine. How do we process this and come to our simplistic descriptors of wine? Flavor processing incorporates smell and taste to identify nutritious foods and drinks, and to protect us from eating things that are bad for us. Flavor processing is tied to memory and emotion. We remember the way a great cabernet smells and we like the pleasing taste. Neurologically speaking, the orbitofrontal cortex of the brain transforms taste and smell and forms the sensation of ﬂavor. Add in touch and vision and now we have a complex uniﬁed sensation that the brain tells us is a nice, hedonistic experience.

Remember the old slogan Better Living Through Chemistry?In my book, that’s what a great bottle of wine is all about. 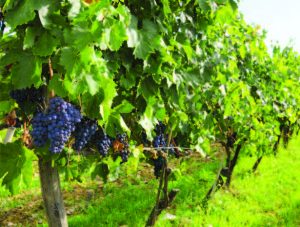 Vines, like people, work best under stress. Growers have no control over rainfall, but they do over irrigation. Many growers practice deﬁcit irrigation. Neutron probes are inserted into the soil to indicate when water is required. Stressing the vines causes the roots to synthesize abscisic acid (a kind of plant hormone), sending this to the leaves and deceiving them into reacting as though there are drought conditions. Shoot growth stops and all energy goes into ripening the fruit.  Moderate water deﬁcit can double or triple the concentration of the precursors of the varietal thiols that are released during fermentation. Timing of stress is also critical. It is beneﬁcial for sauvignon not to be stressed, especially if pyrazine aromas are desired in the wine. Unstressed cabernet sauvignon also produces very pyrazine-dominated wines.