Cryotherapy is coming to a health club near you. Is that a good thing?

In the classic sci-fi film Logan’s Run, set in the year 2274, citizens of a certain age entered a special chamber called the Carousel, where they were “renewed.” It turned out that was future-speak for being vaporized. Renewal has a different look in 2018, although in the case of cryotherapy, it still has a futuristic feel. Across the country, citizens of a certain age are discovering the renewing benefits of the cryosuana chambers that have started to pop up in gyms, health clubs and spas. You may have seen one; it’s an insulated standalone chamber that you stand in, with protection for your hands, feet and private parts, and your head exposed at the top. 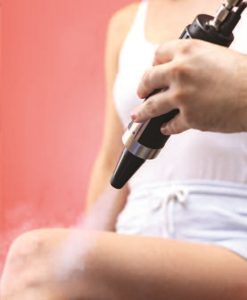 Cryotherapy is an ergonomic modality used to address a wide range of aches, pains and medical conditions. It also has benefits for athletes looking to improve their performance. The ancient Greeks and Romans used cryotherapy (immersion in chilly seawater) to treat inflamed wounds. In the 19th century, European medicine rediscovered this technique. A couple of generations ago, cryotherapy looked a lot different: a bag of ice wrapped around a knee or shoulder, a chilled whirlpool bath. In the 1970s, Japanese researcher Dr. Toshiba Yamauchi pioneered the concept of whole-body cryotherapy to treat rheumatoid arthritis and, in doing so, began to notice its therapeutic side effects for subjects who suffered from injuries and chronic inflammation. Since then, there has been a huge amount of medical information coming out about this technology and how it can benefit the human body in myriad ways.

Back to the cryosauna chamber. Liquid nitrogen gas is expelled at –200⁰C and blown around your body in the chamber, escaping from the top. It’s all over in three minutes. You’re shivering, yes, but you quickly warm up and experience a particular euphoric feeling, which keeps a lot of folks coming back. “Regulars” often schedule sessions every one to two weeks.

What exactly is going on with this cold air and your inflammation/injury? The cold blast hits the skin and the blood vessels constrict. The skin doesn’t “like” the cold and shunts blood to the center of the body, the core, to keep it warm. The autonomic nervous system—which controls automatic stuff like breathing and heart rate— begins to take over. It is composed of the sympathetic (fight or flight responses) and the parasympathetic, which conserves energy and relaxes things. The body begins to shiver, contracting muscles to stay warm, and increases the metabolic rate. This is the sympathetic part. The chemical mediators that started this process are basically put into hibernation and the tissues’ response is one of slow motion. The blood slows down in the extremities and, in turn, slows down what is called oxidative stress to the tissues (aka free radical formation).

Another part of the autonomic nervous system, the parasympathetic system, when exposed to cryotherapy, begins its magic with releasing noradrenaline from the nervous system. This helps to alleviate pain along with several other actions. Increased parasympathetic activity has been linked to exercise recovery and a reduction in cardiovascular risk for stroke or heart attack

Medicine can be so boring, right? So let’s skip to the good stuff. Why would cryotherapy be something of interest to you? Well, there are many medical issues where this type of treatment has been tested and the results are pretty eye-opening. For example, studies have shown remarkable improvement in low back pain with as little as 10 sessions of three minutes duration each.

Another area where cryotherapy has proved to be effective is sleep. A study of elite basketball players from Europe showed a 15% improvement in the quality of their sleep with as little as one session. The maximal effect was demonstrated after 10 sessions.

Currently, the main customers for cryotherapy are seeking relief and recovery from the pains and strains of physical exercise. When we exercise strenuously, we release inflammatory compounds like CRP (C Reactive Protein), and inflammatory cytokines—including Tumor   Factor, Interleukin and Interleukin 6—into the circulatory system. Not good. Pain, swelling, stiffness, loss of motion all come with “overdoing it.” Free radicals are also part of the picture, generated during exercise. These free radicals attack cell walls, especially the lipid (fatty) parts, which causes cells and blood vessels to leak. With cryotherapy there is a dramatic reduction in these factors by virtue of cryo’s ability to generate an Interleukin inhibitory factor, and by releasing an anti-inflammatory cytokine called Interluekin 10.

I know. It can be a little confusing. But here is the takeaway: Even after a single three-minute exposure, there is medical proof that the inflammatory chemicals begin to reduce in concentration in the blood. Strength can actually increase after cryo treatment. Power also can improve after as little as one to three sessions. And, for all those runners/rowers out there, the body’s VO2 Max is increased after as little as three exposures. Athletes having been “cooling it” before competing and noting an increase in performance. The NBA Dallas Mavericks and the NFL Dallas Cowboys are among the pro teams that have these machines.

There is also evidence that cryotherapy can benefit individuals experiencing depression and anxiety, as pain can be the underlying issue in both cases. By exposing the body to cryotherapy, it increases the metabolic rate —as detailed above—which brings with it an increase of catecholamines, such asepinephrine, norepinephrine and dopamine. Also cortisol, ACTH and endorphins are increased as a result. These are all ingredients for improving one’s mood and attitude. In the brain there is a system called the Opioid Peptide System, which regulates motivation, emotion, responses to stress, and control of food intake. You can see how this is part of the depression and anxiety issue. With cryotherapy, this Opioid Peptide System is stimulated to release these chemicals into the brain. Indeed, medical studies have shown significant improvement after only five sessions.

One final aspect of cryotherapy that is worth noting is that its benefits are cumulative. The more you do it, the better things tend to get. That sounds like a good business model, doesn’t it? It’s another reason you may be seeing cryosuana units coming to a location near you.

What Exactly Is Inflammation?

We have all seen inflamed joints, tendons, and extremities. Hot, sometimes swollen and painful limbs, spine and joints all tell us that we have either done too much in the gym or have been subjected to injury. Inflammation and injury start with the vascular system. Small arteries and veins are part of the capillary system, where they are renamed arterioles and venules. These are called the endothelium. With trauma or overuse, the endothelium becomes sticky and attracts platelets and leukocytes (white blood cells) that clump together at the site of injury and begin to decompose. Doctors call this degranulation. Once this happens, there are all sorts of chemical compounds released by these cells to create a pulling-back of the endothelium, creating gaps inside the walls of vessels. These compounds have nasty names like tumor necrosis factor and interleukin 1. Additionally, free radicals, histamine and serotonin are generated and all swim in the same pool of liquid inside the vessel. With the gaps created, the liquid inside the vessel, lets call it plasma, leaks out into the surrounding tissues, joints and muscles and creates swelling and irritation. This liquid has a higher protein content than inside the vessel, and therefore more liquid from inside the vessel tries to dilute the protein outside the vessel. Then the body attempts to heal itself with more cells “coming to the rescue”—namely macrophages, which are human waste disposals. They grind up and eat the damaged tissue so that new tissue can be laid down. However, this process is not fun. It hurts. It’s the body’s way of saying, “I need some time off to heal this problem.” 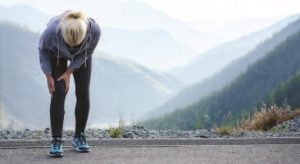 This is a disease where the body is essentially destroying itself, eating away at soft tissue and bones. Studies have shown that some of the chemical factors involved in this disease are Interleukin and Tumor Necrosis Factor. With cryotherapy—and from here on I am talking about the cryosauna unit—exposure does remarkable things to the blood work of rheumatoids. With 10 exposures of three minutes. there is a significant drop in these chemical markers, which in turn decreases pain, inflammation, and degradation.

A difficult diagnosis to deal with, as this is a diagnosis often arrived at after loads of negative testing results. The anguish of chronic pain, often from a neurological basis, is distracting to patients. Cryotherapy has shown that, with as little as 15 treatments of 30 seconds in duration, there is a dramatic effect on reducing pain.

MS is a debilitating disease of the muscles and nerves.

Fatigue was the overwhelming issue in most MS patients when questioned about their disease. With 10 three-minute exposures, there is a significant reduction in fatigue of the skeletal muscles.

EDITOR’S NOTE: Although thousands of athletes, including LeBron James, swear by whole body cryotherapy, the FDA has not approved any WBC devices. It’s a good idea to discuss cryotherapy with your doctor, especially if you plan to replace more traditional treatment options for medical conditions.