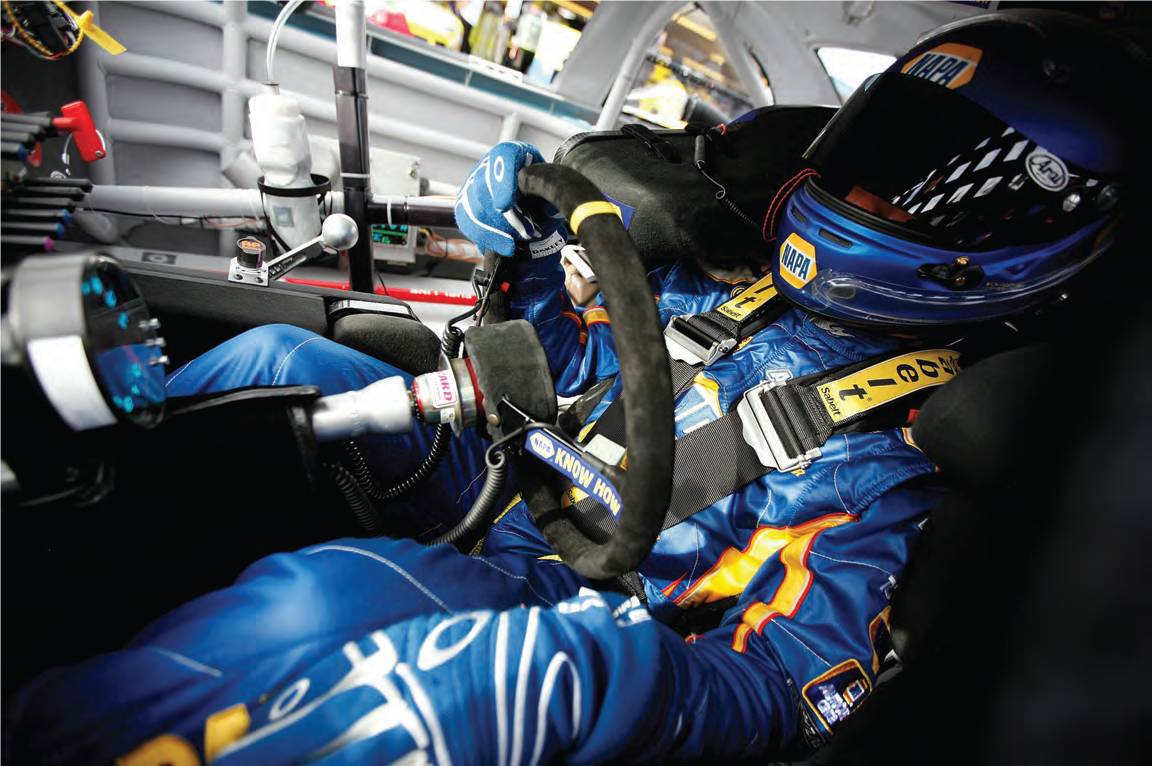 You’ve probably heard that NASCAR has become a really big deal. You may even know a couple of closet racing fanatics 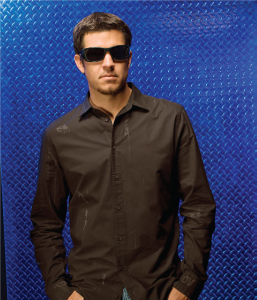 yourself. But let’s be honest— New Jersey is hardly a breeding ground for stock-car racing talent. Well, just don’t tell that to the folks in Ocean County. Every weekend they root for one of their own, MARTIN TRUEX JR., to take the checkered flag against the likes of living legends Jimmie Johnson, Jeff Gordon and another “junior”—Dale Earnhardt. How does a world-class racer go from the dirt tracks of South Jersey to the legendary ovals and super speedways of NASCAR? Turns out, it’s all in the family.

EDGE: Your father was a short-track racing legend in the northeast, and also the local “Clam King”—the owner of a large seafood business here in New Jersey. What do you learn from a family culture like that?

MT: Well, it’s a little bit different from what most people grow up around. My dad was a businessman who raced as a hobby, but he was very serious about it. He had aspirations of moving up and running in the big time—which he did, but he never had the equipment to drive for a living. Obviously he put a lot into it. His passion for racing is one of the things that made him successful in business, because he knew he had to make money to go racing.

EDGE: So you understood the connection between passion and work ethic?

MT: Yes, I did. My dad worked really hard so he could go racing. That’s what I learned from him, that you have to work hard for something. And that to be a racer you really have to want to do it, because there are thousands of people who want to do it, too. You won’t get that chance without working hard and taking it seriously.

EDGE: When you and Martin Sr. talked about racing, did you focus much on the danger of the sport?

MT: No. As a racer you worry about how you can go faster, how you can do better than the guy in front of you. I don’t think anyone who has raced for a long time worries about the danger of it. You’re passionate about winning, and all that other stuff is just secondary.

EDGE: How was the competition in South Jersey when you were growing up? 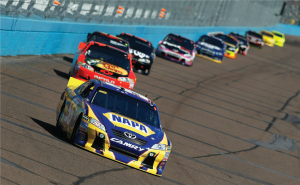 MT: When I was racing in Jersey it was never what I’d call a “hotbed.” There were only a few places we could go. But there was good competition. So I was able to learn the ropes and refine my techniques at a young age. That had a lot to do with why I became successful.

EDGE: Did you feel at home behind the wheel when you first began competing as a teenager?

MT: Racing was something I was interested in long before I got to do it. The will to get into racing was there for a long time. I was able to learn a lot from my dad—I didn’t just go and watch him race. I really paid attention to what was going on. I hung out in the shop, worked on the cars and tried to learn as much as I could. When I first got into a race car it was second nature. I felt I’d been doing it all my life. It felt natural to me.

EDGE: Your younger brother, Ryan, has gotten off to a fast start in his career. Do you think you two had a similar feel for racing? 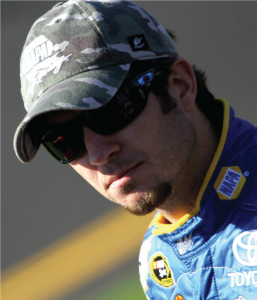 MT: Yeah, I think we did. One day he came to my father and me and said, “I want to race.” We’d never really appreciated his interest in it, but once Ryan started, we could tell that he really knew what he was doing. He had been paying attention, he had been learning—almost with no one even noticing it. Right off the bat he was fast, and right off the bat he’s been winning. When Ryan got into a car, he clearly understood racing. He’s going to be running some Nationwide races this year and he’s only 18! That tells you how quickly he’s learned and how well he’s been able to adapt to different cars in different situations.

EDGE: You won back-to-back Busch championships in 2004 and 2005. Obviously, at that point you knew you could be successful at the top levels of auto racing. Looking back, what was your Eureka Moment—the time when you first thought to yourself, “Oh, man. I can do this!”

MT: As soon as I got in [Dale Earnhardt Jr.’s] Chance 2 car in 2003, I knew right away. The first time we ran, no one was expecting much and I had a shot at winning that race. I knew at that moment that this was my opportunity, and that I had to take advantage of it. I knew we could do it. With the crew we had and the equipment we had, I knew it was possible to win. From that moment on I was able to focus on what I needed to do as a driver and as a member of a team. And I had a great team. So we went into 2004 with a ton of confidence. We knew we could win races…and we ended up winning the championship.

MT: Yeah. We had as good a shot as anyone. We were leading right up until the end. It’s hard to be the leader at the end of the restrictor plate races because you’re kind of a sitting duck.

EDGE: That’s an example of how razor-thin the difference is between winning a race and coming in, say sixth, which you did—just a couple of seconds behind the winner.

MT: It all comes down to circumstances. It takes not only your decisions but the decisions of the other drivers to determine the outcome. If two or three other guys had made different moves, and then I had made a different move, the outcome would have been completely different.

EDGE: Do you look back and say I should have done such-and-such differently?

MT: It’s really hard to second-guess, hard to look back. Obviously I wanted to win the race—that’s what I was there for—but there were 10 or 15 guys who could have won that race! So it’s a little bit of a crapshoot. That’s just the way it goes. You don’t think too much about the past, you just learn from it—and hope you do better the next time and win.

MT: No, working with Michael has just been a blast. When he got out of the car, he wasn’t looking for a guy who was “as good as me”—he was looking for someone he thought was better, because he wants his car to run up front. To have him pick me, that was a cool feeling. To be honest, it reminded me of when I was 18 and my dad was still racing in the Busch North series. We were planning on running a few races together and seeing what happened. We ran one race and he retired. He said, “I realize you’ve got a great opportunity to do what I always wanted to do. I’m going to quit right here and put all I can behind you to get you ready to go.”

EDGE: It’s the NASCAR version of the Circle of Life.

MT: I guess. But I can’t imagine stepping out of the car and handing over the keys, per se, to someone I thought would do a better job. It just blows my mind. I love racing so much, I can’t imagine being in a position where I’d do that. And for my brother Michael, racing’s all he’s known and done. He is so passionate about it. So that really showed his true character—and made me very proud. It makes me want to do a good job for him. 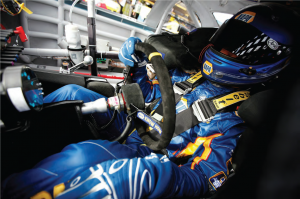 EDGE: The main sponsor of your car is NAPA. Do you have much interaction with them?

MT: NAPA Auto Parts has been a huge part of this sport for a long time, so it’s an honor to drive the race car for them and be the face of NAPA. Being a part of the company, of the storeowners and employees, that part’s actually been a lot of fun.

EDGE: Does winning a race ever get old? Do you still get the same thrill you did when you were a teenager?

MT: To be honest, these days, at this level, wins are so much more difficult to come by that it’s better. The harder they are to get the sweeter they are!

EDGE: When you return to New Jersey for the holidays to visit friends and family, is there any one place that is special to you?

MT: The Jersey Mike’s in Manahawkin. My friends and I spent a lot of time in there. You know how on TV you have those restaurants the high school kids use as their hangout place? That was ours. That place will always be special.

EDGE: A lot of people who grow up in Jersey don’t truly appreciate it until they’ve left. What is it about the Garden State that you remember most fondly?

MT: The thing I appreciate, having grown up at the Jersey Shore, is the natural diversity of the state. Where I lived in Ocean County I could go five minutes and be out on the bay fishing, or go five minutes in the other direction and be out in the woods hunting. But with my family being in the seafood business and me loving to fish, the salt water is what I miss the most. Jersey sometimes has a bad reputation, but if you ask me, it’s a pretty great place to live.