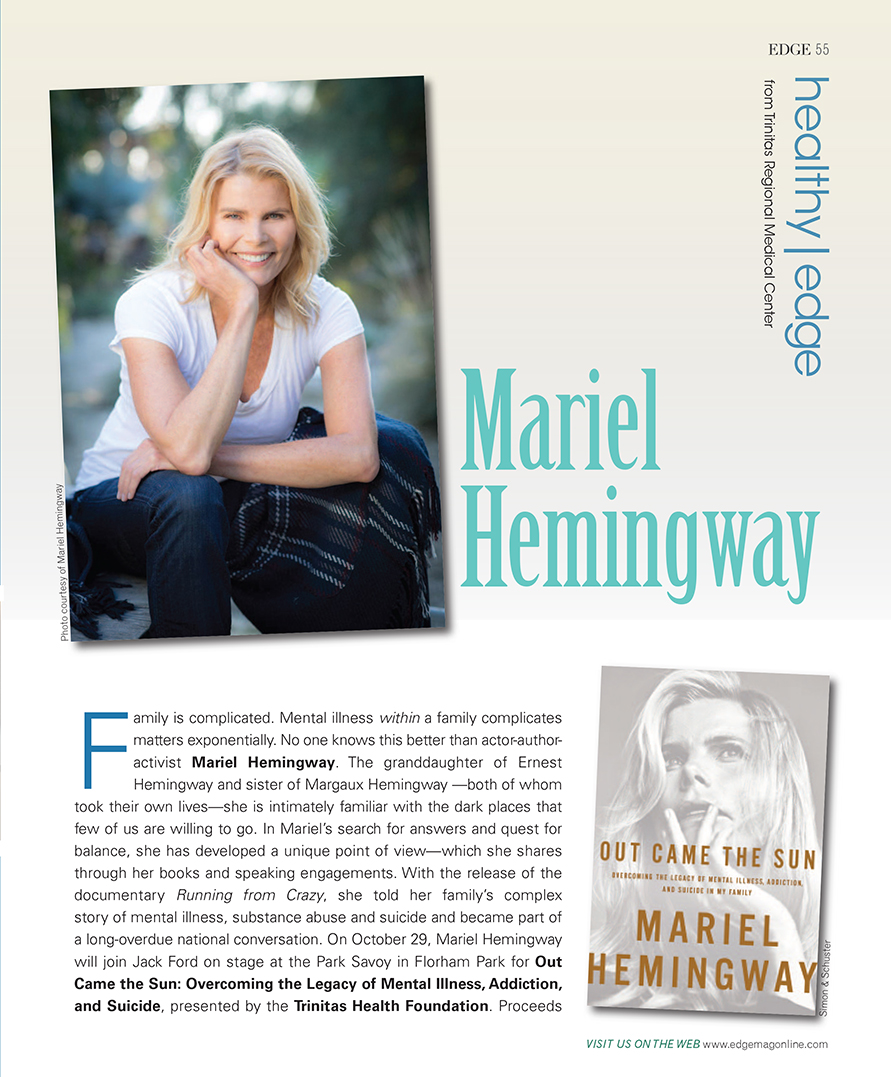 Family is complicated. Mental illness within a family complicates matters exponentially. No one knows this better than actor-author- activist Mariel Hemingway. The granddaughter of Ernest Hemingway and sister of Margaux Hemingway —both of whom took their own lives—she is intimately familiar with the dark places that few of us are willing to go. In Mariel’s search for answers and quest for balance, she has developed a unique point of view—which she shares through her books and speaking engagements. With the release of the documentary Running from Crazy, she told her family’s complex story of mental illness, substance abuse and suicide and became part of a long-overdue national conversation. On October 29, Mariel Hemingway will join Jack Ford on stage at the Park Savoy in Florham Park for Out Came the Sun: Overcoming the Legacy of Mental Illness, Addiction, and Suicide, presented by the Trinitas Health Foundation. Proceeds from the evening will beneﬁt the Peace of Mind Campaign, a $4 million initiative to renovate the hospital’s Department of Behavioral Health and Psychiatry.

EDGE editor Mark Stewart intruded upon her summer sojourn in the mountains of Idaho to chat about her family, her passion and her career.

EDGE: I’m curious about the documentary Running from Crazy. It was extraordinary. How does something like that even get made?

MH: It started when one of my best friends, Lisa Erspamer, who worked with Oprah Winfrey at the time she was leaving her talk show and they were starting OWN. She said to me, “You’ve got to tell your story.” I asked her, “Ummm…why would I do that? My family’s crazy.” Lisa said, “That’s the point! That’s why you have to tell your story!” We started shooting it in 2011 and it was released in 2013, with a premiere at Sundance.

EDGE: Have appearances like the upcoming Trinitas event with Jack Ford become a signiﬁcant part of your schedule?

MH: Yes, actually. I’ve been doing speaking engagements all over the country now, gosh, for about nine years. You know, I never thought that was going to be my thing, telling the story of my family and revealing the darkness that haunted my siblings and my grandfather, all the addiction in my family. But I realized after doing the movie and speaking a few times, how important it is for others to feel as though they can tell their stories. I really believe that telling your story is a step in recovery and healing. So it’s been really wonderful. I’ve written two books since then. One of about their lives. We all experience some form of mental instability at some point in our lives, whether or not we have mental illness or are dealing with some kind of a loss. Also, in this very highly technical age that we live in, we are all getting more and more disconnected from ourselves and other humans. It’s really important to share your story, to let people know we are all the same.

EDGE: What do you want to get across when you talk to people suffering with mental illness, or to people dealing with a loved one who is struggling with it?

MH: There are ways of making your quality of life—and that of the people around you—much better. One of the things I want to get out there is I want people to realize that everything they do in their lives matters, especially when you have a mental health issue. What are you eating? Are you drinking enough water? Are you consuming alcohol? Are you not sleeping enough? Are you exercising? I’m not a doctor, but all these different things affect the brain, especially if you have a sensitive brain. My feeling is let’s do as much as we can as individuals to make our lives better, and to make the lives of those suffering better. I know you know this because you’ve got someone in your family—it can be very difﬁcult to get them to see it, to acknowledge it, to take responsibility for it…but it can be done.

EDGE: What has impressed you about the way people are approaching issues of mental health?

MH: The more I’m in the space, the more I see people doing extraordinary things. There is a doctor in Dade County, Florida who wants to turn the whole system around because he doesn’t see why people suffering from mental illness should be incarcerated. Mental illness is it own speciﬁc thing, yet it has numerous facets. Take addiction. Addiction is a huge problem in this country, whether it’s alcoholism or opiate addiction. We are inundated with so many mental health disorders that need to be addressed differently, but ﬁrst we need to pay attention to them. We can make a difference the more we speak about it.

EDGE: Do you feel awareness of mental health issues has improved signiﬁcantly in the past decade?

MH: It’s getting better. We’re not there yet. But when you see Lady Gaga and other celebrities talking about mental health—people with that kind of fan base and following— that makes a difference. Sadly, that’s what it takes. But it is a good thing if it makes people embrace it and say, “Hey, we’ve got to pay attention to this.”

EDGE: Let’s switch gears and talk about your career. Since you can now ﬁnd everything ever made somewhere on the Internet, which of your ﬁlms or TV shows should your fans go back and re-watch?
MH: The ﬁlm and television I did…it’s interesting. It was always the right thing I needed in my life at that time, so it was the best thing I was doing. There was one ﬁlm that was super-fun, an independent ﬁlm called The Sex Monster. It had a terrible title—it sounded life soft-core porn [laughs] but it wasn’t. It was really funny. You know, I watched Personal Best this year for the ﬁrst time since it came out in 1982. It holds up. It is such a good ﬁlm, kind of ahead of its time. I don’t know. I think more about the people I worked with and how much I loved them. People like John Candy in Delirious or Peter O’Toole in Creator. These were movies that didn’t do that well, but they were so fun to make.

EDGE: I liked the Steven Bochco series in the early 90s, Civil Wars.

MH: I loved making that show! I was actually thinking that [laughs] but I thought maybe you didn’t know what it was!

EDGE: That was a good, tight show with an extraordinary cast.

MH: I know. Debi Mazar, Alan Rosenberg, Peter Onorati, David Marciano (above). They all went on to do lots of great stuff. Bochco was always interesting and [producer] Billy Finkelstein was a good guy, too. I learned so much about acting and discipline making that show.

EDGE: Who else made the light bulb go on for you? Who helped you take things to the next level?

MH: I learned a lot from working with Woody [Allen]. Not that he said a lot, but it was an interesting set to be on. I probably learned the most about digging deep into your soul for a performance from Bob Fosse (left). Star 80 was a difﬁcult movie to make but he was an incredible director. Because he was from Broadway and was a choreographer, he had an interesting way of going about things. The way he rehearsed and rehearsed as though it was a play. You just don’t get that opportunity anymore.

EDGE: You’ve got a number of projects going on heading into 2020.

MH: I do. I’m producing [Ernest Hemingway’s] A Moveable Feast into a short- form series. I’m not going to be in it because I’m too old now [laughs] but I’m very excited to be creating my own stuff now, and that’s what I’m doing moving into the future.

EDGE: Is it stressful keeping so many balls in the air at once, or is that kind of your comfort zone?

MH: I guess I’m that person who, if you give me too much to do, I’ll get it done. And if you don’t give me enough I sit there wondering what to do. It’s not too much yet. I really enjoy it. I’m good about keeping a balance to my life. It’s taken me a lot of years to ﬁgure it out, but I think I’ve ﬁnally done it.