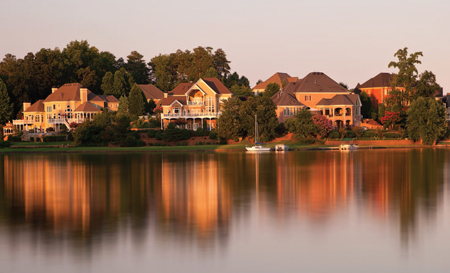 Location. Location. Location. To the water lover in search of the perfect ﬁrst home, next home, or vacation home, an ideal location must be close to the edge, so to speak—whether it be ocean, lake, river, bay, stream or even pond. The mere mention of waterfront or water view in a property description elevates a  home to an entirely different category. Who among us hasn’t clicked on one of these idyllic listings, if only for fun or inspiration?

Samuel Coleridge’s Ancient Mariner would ﬁnd himself right at home in New Jersey, a state surrounded on three sides by rivers, bays and ocean, overﬂowing with water-friendly opportunities. The Jersey Shore is the headliner, with 141 miles of valuable land on or overlooking the Atlantic, stretching from Perth Amboy in the north to Cape May Point in the south—and including Middlesex, Monmouth, Ocean, Atlantic, and Cape May counties. The lake country of northern New Jersey competes as the “other” Jersey Shore, with a total of 400 signiﬁcant bodies of water, or 1,700 if you include small ponds and reservoirs. One estimate by The New Jersey Leisure Guide claims 4,100 freshwater lakes, ponds, impoundments and reservoirs covering about 61,000 land acres, most of which are privately owned or controlled.

As for rivers, approximately 240 run through our state, with a dozen or so considered to be notable. With few exceptions, the surrounding real estate carries a signiﬁcant premium.

What is it about water that makes it a primal attraction? There are some hypotheses that, because mankind has evolved from sea creatures that managed to crawl from the ocean millennia before our bipedal ancestors inherited the earth, we yearn to return to our liquid roots. By whatever means our forerunners managed to evolve from swimming to crawling to walking, the human connection to water is undeniably strong. About 70% of our body at birth is water and so is 70% of the earth’s surface. Our search for water is not just earthbound; we have been looking for decades into the far reaches of the universe with the understanding that, if we ﬁnd water we have a good chance of ﬁnding life. Little wonder then that so many of us seek to make our homes close to water, whether our reason is biological or spiritual or both.

It Comes With a Price

Whether you’re a surfer dude, a river rat, a lake girl, or just someone who feels renewed by the sight and sound of water, there is a home for you in New Jersey. Indeed, according to a recent Zillow online report, there are over 2,900 waterfront homes for sale in the Garden State. But check your pocketbook ﬁrst. Prices range from almost $10 million for an opulent 17,000 square foot home in Rumson to less than $200,000 for a modest ranch in Forked River.

Once you have decided on a water-adjacent future, paying attention to certain details is critical to ensure that you make a prudent choice. The typical water lover is also a sun worshipper (in other words, a friend to fair weather), so think about the north/south orientation of the house and its outdoor living space. A southern exposure gets sun for the better part of each day, which makes it attractive to not only a water lover, but also a solar heating advocate. The cooler ﬁltered light of a north-facing home, on the other hand, might appeal more as a refuge from the sultry New Jersey summers. Next item to consider is the home’s east/west orientation. If you are an early riser, you might prefer an eastern exposure. Imagine sitting on your deck cradling your favorite breakfast beverage while watching a dazzling ocean sunrise. On the other hand, if you would rather be stirring some drinks on the deck at dusk, then facing west might be the perfect way to end your day with a spectacular sunset.

Life by the water does demand other more serious due diligence. One item of concern for a prospective buyer involves the riparian rights that are attached to any property adjacent to a body of water. Traditionally, riparian rights are the deeded rights and privileges of the landowner to make reasonable use of the water feature “as it ﬂows through or over the property”— including access for swimming, boating, ﬁshing and construction of docks, piers and boat lifts. The operative word is deeded, in that it demands a close read of property documents, especially for older, more historic sites. Importantly, title companies do not insure water rights. In fact, riparian rights are often so vaguely recorded in deeds and other public records, if at all, that the services of an attorney who specializes in such matters may be warranted.

The ﬁnal and perhaps most obvious consideration when contemplating the joy of waterfront living is a realistic assessment of the area’s storm history and worst-case potential. No fewer than 114 major storms have slammed into various parts of New Jersey, including Hurricane Donna (1960), Tropical Storm Floyd (1999), and Tropical Storms Irene (2011) and Sandy (2012)— as well as myriad lesser nor’easters and cyclones. Thankfully, New Jersey has never been ravaged by a Tsunami, but don’t tell that to the Sandy survivors who had a wall of water wash through their homes, or wash their homes entirely away. They are still recovering ﬁnancially from (and stormprooﬁng defensively against) a possible future disaster. And for the record, storm devastation is hardly limited to ocean frontage; the dreaded storm surge where high winds force tidal water to swell inlets. Estuaries and other bottlenecks have brought extensive and often unexpected ﬂood damage in its wake.

The total estimated value of waterfront homes in the United States in June 2018 was $134 billion. Interestingly and somewhat surprisingly, according to a Forbes article published at that time, waterfront sales in the U.S. market ”aren’t what they used to be.” The story cited the fact that the sale-price premium is now 36% (over a similar, non-waterfront home) as opposed to the 54% premium estimated six years earlier, in 2012. That’s still a nice bump, but also a decline.

What might account for this? Zillow cites superstorms, climate change, and changing taste since the housing crash that began in 2007. Needless to say, everyone has an informed opinion and, needless to say, they don’t all line up very well. For instance, in his book High Tide on Main Street: Rising Sea Level and the Coming Coastal Crisis, oceanographer John Englander maintains that “Property values will go underwater long before property actually goes underwater.” Trulia paints a more positive picture, citing statistics such as median waterfront home sales in New Jersey increasing 30% over the past year, with the price per square foot rising from $794 to $858.

A realistic appraisal of the waterfront market in New Jersey would not be complete without some input from experienced New Jersey property experts. Dori Morgan, a Realtor Sales Associate with the Weichert Agency in Sparta—whose own home is a private lakefront residence on Lake Mohawk—is very bullish on the almost totally lakefront market in her part of the world. In fact, she estimates that a listing with lake frontage can command up to double the price of any comparable, whereas lake views can add $20,000 to $100,000 to the listed price. With around 20 lake communities in Sussex County alone, Morgan claims, “There is a lake waiting for anyone on any budget looking for a relaxed lifestyle.” Her prognosis for the near-term market is positive based on a recent surge in lakefront sales. Like the true lake girl she is, she points out that “living here is like living inside a snow globe…with a lake and mountain vista that changes with every season.”

Further south on the Jersey Shore, Stephen Smith is also a waterfront homeowner, in Sea Bright, and an agent in the highly successful Gloria Nilson Rumson ofﬁce. Monmouth County is true waterfront country in that it boasts valuable real estate all along the Jersey Shore, as well as alongside historic rivers such as the Shrewsbury and Navesink, which form the Rumson peninsula. Smith estimates that waterfront properties in general average approximately 40% higher in value. He is impressed with the degree of risk tolerance that has evolved post-Sandy, which he attributes to the well- designed and  -engineered plans and codes that have guided the teardown, rebuild and elevation projects that have helped to restore the waterfront.

New construction today is viewed as more desirable than the once venerable Shore cottages, and high-rise condominiums have become a booming market niche, especially those with ocean  views and access. The rewards of his chosen profession stem from the emotional satisfaction he derives from “matching my client’s dreams with the perfect home in the perfect spot—waterfront or otherwise.”

On a personal note, decades ago I happened to have lived next door to the mega-mansion mentioned earlier in this story—in what was, at the time, the charming circa 1900 caretaker’s cottage. My home was situated on a bluff fronting the Shrewsbury River across from Sea Bright with an unobstructed view of the Atlantic. It seemed to be the best of both worlds: river frontage plus ocean vista. I miss it still when I’m feeling nostalgic or water-deprived. Except when a hurricane or nor’easter is rolling in. My advice is pay attention to the “water” part of waterfront and never underestimate the forces of nature.

Despite storms and surges—and financial drawbacks such as higher real estate taxes, higher insurance premiums, and higher maintenance expenses—the lure of living close to water will always command a premium. We turned what I thought was a handsome profit when we sold our house; today I don’t even want to think about what it would cost!

If you have been waiting for what seems like forever for your waterside dream to come true, maybe the time is right to take a deep breath and make the plunge. If not, remember you can always test-drive waterfront living in a rental. Just make sure to start checking the listings way before the season starts. You’ll have some competition.

The goal of Feng Shui is to harmonize people with their surroundings. Translated into English, Feng Shui actually means wind-water, so it comes as no surprise that its fundamental principles dictate that living near a water feature can affect a homeowner’s emotional well being. Ideally, the front door should face the water to assure the proper ﬂow of energy. Locating near smaller, more manageable bodies of water is recommended, whereas a site too close to a powerful water source (like the ocean) can result in feelings of being overwhelmed or drowning. Feng

Shui associates even the smallest water element with wealth and money. So if you’re suffering from sticker shock at the average waterfront markup, you might want to consider adding a simple water feature to your current residence, even one as tiny as a garden fountain.

According to real estate specialists  Collateral Analytics, making a checklist is helpful in comparing one waterfront property to another. The more boxes you check, the better.