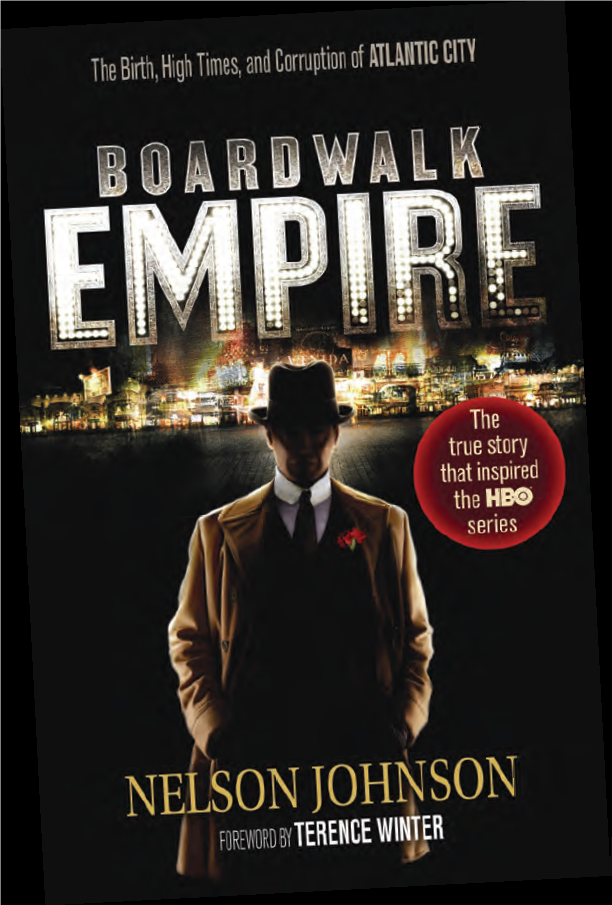 Thanks to Nelson Johnson, you’ll never look at Atlantic City the same way again. The attorney for the Atlantic City Planning Board during the casino boom of the early 1980s, Johnson was inspired to write about the history of the town that began as a tranquil seaside health resort and became a playground for the mob. His research resulted in a book entitled Boardwalk Empire: The Birth, High Times, and Corruption of Atlantic City (Plexus Publishing, $16.95)—and provided the inspiration for HBO’s critically acclaimed series Boardwalk Empire. Prior to Boardwalk Empire, Nelson’s name was unknown in the literary world. However, no author in the Garden State is more qualified to write with authority on matters of crime and punishment in AC. The Hammonton resident just happens to be a Superior Court Judge in Atlantic County. Judge Johnson’s book is the result of two decades of research, dozens of eyewitness interviews and extensive fact- 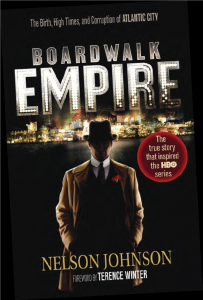 checking. Boardwalk Empire chronicles the highlights and lowlights of the corrupt politicians who came to rule Atlantic City when the town’s sole purpose was providing a good time to its visitors (legally or not). Nucky Thompson, played by Steve Buscemi, is based on Nucky Johnson, the second of three bosses to lead the political machine that dominated city politics, funded by payoffs from bars, brothels, and bootlegging. The real-life Nucky ruled the town for three decades starting in the years prior to World War I. When the author’s manuscript (originally dubbed “Nucky’s Town”) found its way into the hands of John Bryans at Plexus nearly a decade ago, the publisher knew it would sell based on the company’s success with similar regional projects. Johnson always believed it could be more, despite fruitless trips to Hollywood to pitch the story as a feature film or documentary. Fortunately, Johnson did catch the attention of an agent, and in 2006 Bryans received an e-mail from an HBO television executive who was salivating for the rights to a book revolving around shocking backdoor politics, explosive violence, and fatal power struggles. The HBO series debuted on September 19th, 2010, starring Buscemi, Michael Pitt and Kelly Macdonald. The show features the creative talents of Terence Winter, writer on The Sopranos, and Mark Wahlberg as producer; Martin Scorsese directed the first episode. Winter also penned the foreword for the new edition of the book. As a sitting judge, the author has backed away from interviews publicizing the book or the HBO series. However, according to Bryans, upon initial publication, Boardwalk Empire sold roughly 10,000 copies. Thanks to the buzz created by HBO, another 10,000 flew off the shelves. An order for another 85,000 copies, updated to be a tie-in edition, followed. The book concerns itself with a much broader sweep of material than the more narrowly focused series, which, as Bryans points out, focuses on “sex, violence, and swearing.” That being said, the seedy underbelly of Atlantic City is fully exposed in Johnson’s book—often with the aid of stunningly blunt first-person accounts. As one mob connected interview subject observed, “If the people who came to town had wanted Bible readings, we’d have given ’em that…they wanted booze, broads and gambling, so that’s what we gave ’em.” Regarding the HBO series, Bryans has liked what he sees on the small screen. “The show helps you realize that Nucky is a complex, fascinating character, and one you love to hate,” he says. “It’s nice to see that people are open to shades of gray.” “If you delve into the history of any major city in New Jersey,” Bryans maintains, “you’ll probably find the basis for a book. I think Boardwalk Empire makes everyone start thinking about the birth of their own hometown.” EDGE

Editor’s Note: Boardwalk Empire (the series) was renewed for a second season just 48 hours after it debuted on HBO. For more information on Judge Johnson and Boardwalk Empire (the book) log onto boardwalkempire.com. Johnson has already begun work on his next book, The Northside: African Americans and the Creation of Atlantic City.