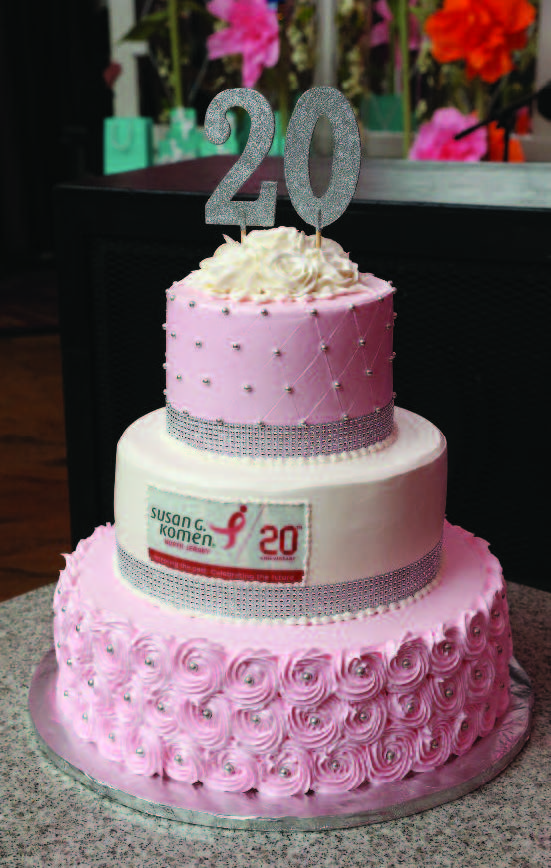 By serving the underserved, Trinitas helps promote the power of pink.

In 1977, Susan Goodman Komen was diagnosed with breast cancer at the age of 33.  She died three years later. Her younger sister, Nancy Goodman Brinker, in honoring a promise made to Susan to promote the ﬁght against breast cancer, fulﬁlled that vow by starting a foundation in her sister’s name, in 1982. Later the name was changed to Susan G. Komen for the Cure with the ambitious goal to end breast cancer forever. Today, the organization is often simply referred to as Susan G. Komen or simply Komen. More than 100,000 volunteers work at the more than 120 Komen afﬁliates active in more than 18,000 communities across the country—which have awarded more than $93 million in community grants to bring needs-based screening and treatment resources to women most in need of them. In addition to the generous grants, Komen invests tens of millions of dollars to further ongoing research.

Nearer to home, one of the Komen Afﬁliates—Susan G. Komen of North Jersey—has just celebrated the 20th year of its dedication to fulﬁlling the national organization’s mission. As part of the network of Komen afﬁliates, Komen North Jersey has awarded more than $16 million in community grants to qualifying non-proﬁt organizations in their nine-county territory. Among them is Trinitas Regional Medical Center, which has received a total of more than $1 million in grants. 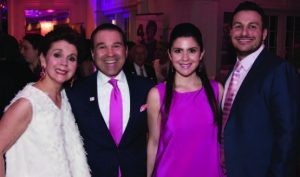 In early April of this year, the Afﬁliate hosted its signature Pink Tie event, honoring its original founders, Deborah Q. Belfatto, Lisa Herschli and Kathy Hubert-McKenna. As a breast cancer survivor, Belfatto—founder and former Executive Director of Komen North Jersey—takes their responsibilities very personally and very seriously. Belfatto worked tirelessly to establish a Komen Afﬁliate in North Jersey after learning that 75% of all money raised would stay local. She says she became “hooked on the Komen formula” as a perfect ﬁt for the greater North Jersey area.

Why Trinitas? Belfatto recognized the medical center’s dedication to “serving the underserved.” Trinitas, she adds, over the years has continued to over-deliver on its services to a blended population relative to their grant promises.

Trinitas provides one-stop breast cancer resources through its Women’s Imaging Center, a $3.8 million investment in radiologic imaging. Included among the services are FDA-approved low-dose mammography, minimally invasive stereotactic breast imaging, and ultrasound-guided aspiration/biopsy. The emphasis at Trinitas is to extend much-needed help to women with limited or no resources in getting through their battles with breast cancer. Given that their missions are so closely aligned, the Trinitas/Komen partnering has ﬂourished for almost 16 years. Their ongoing relationship is a tribute to the Komen belief in the value of networking and partnership within the local community.

Much has changed since Belfatto ﬁrst got involved in the ﬁght against breast cancer. Back in the 1980s, she recalls, treatment was a “one-size-ﬁts-all” approach. Thankfully today, treatment regimens are highly personalized and more speciﬁc to particular cancers. As a result, the survival rate for breast cancer has improved dramatically—although sadly 1 out of every 8 women in her lifetime in the U.S. will still confront a breast cancer diagnosis. Progress has been made, but much work remains to be done. As for her approach to the Komen cause and to life in general, Belfatto sums it up in four words: persistence, perseverance, passion and patience. And she never takes No for an answer.

In recognition of Deb Belfatto’s participation in the grant review process of Komen North Jersey—and her continued support of Trinitas as a consistently worthy grantee—she was invited to join the Trinitas Health Foundation Board in 2013. She reciprocated by extending her own ultimate compliment in noting that Trinitas is “one of the most selﬂess hospitals with whom I have ever worked.”

Kathi Edelson Wolder. Who heads up Marketing and PR for Komen North Jersey, is another example of a totally committed member of the Komen support network. She was recently named a Komen Angel and her portrait hangs in the gallery of Komen’s Journey of Courage. Wolder parlayed her professional marketing experience into furthering the success of Komen North Jersey afﬁliate events. Most recently, she was instrumental in marking the 20th anniversary celebration of Komen North Jersey with one of the most successful “Pink Tie” gala celebrations. Starting in 1997, there have been 16 Pink Tie Balls that have contributed to the total $23 million that Komen North Jersey has invested in lifesaving research and local community grants. The most successful affair was sponsored in 2005 by Continental Airlines and held in Newark Airport—with 1,400 guests attending and $2.1 million raised. Wolder and Belfatto say it was “magical, like make-believe in the glory days” of formal extravaganzas.

Recently, the Pink Tie Ball underwent a name change. It is now known as the Pink Tie Party. The younger generation is less formal, Wolder explains, although pink bow ties were as always the neckwear of choice on the dance ﬂoor. She is busy focusing on helping to cultivate “a new regime” among the up-and-coming younger generation, who bring the limitless possibilities of the digital age to the Komen communication and publicity efforts. Whether it’s called a “ball” or a “party,” a fun atmosphere prevails and successful fundraising is accomplished. The latest event was attended by almost 500 supporters and grossed $500,000, which will soon be put to good use through Komen grants.

What powers the efforts of Belfatto and Wolder? Their belief in the future of the ﬁght against breast cancer through the support of what they have labeled “Merging of the Ages”—i.e., young and energized Gen-X and Millennial supporters. Belfatto says it’s like being “surrounded by rock stars in the breast cancer community.”  EDGE

Editor’s Note: Nothing makes Deb and Kathi happier or more hopeful about keeping the movement strong than to look into the faces of the future within Komen North Jersey and beyond. They continue to encourage survivors and co-survivors of all ages to continue their support of Susan G. Komen North Jersey and its events, including the Race for the Cure, which takes place each May.

1984 Nancy Brinker is diagnosed with breast cancer and survives

2002 More than 1.3 million participate in 100 Race for the Cure events worldwide

2017 More than 3.1 million breast cancer survivors in the US today

2026 Target date to reduce deaths by breast cancer by 50% 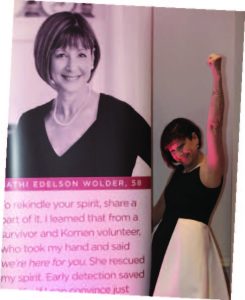 TAKING NOTHING FOR GRANTED

Komen North Jersey works with professionals and community leaders to perform a comprehensive needs assessment, the Community Proﬁle, every 5 years as the basis for grant application. Funds awarded from Komen grants are restricted in that the money must be used to provide vital breast health services and treatments and are never comingled with general operating funds.