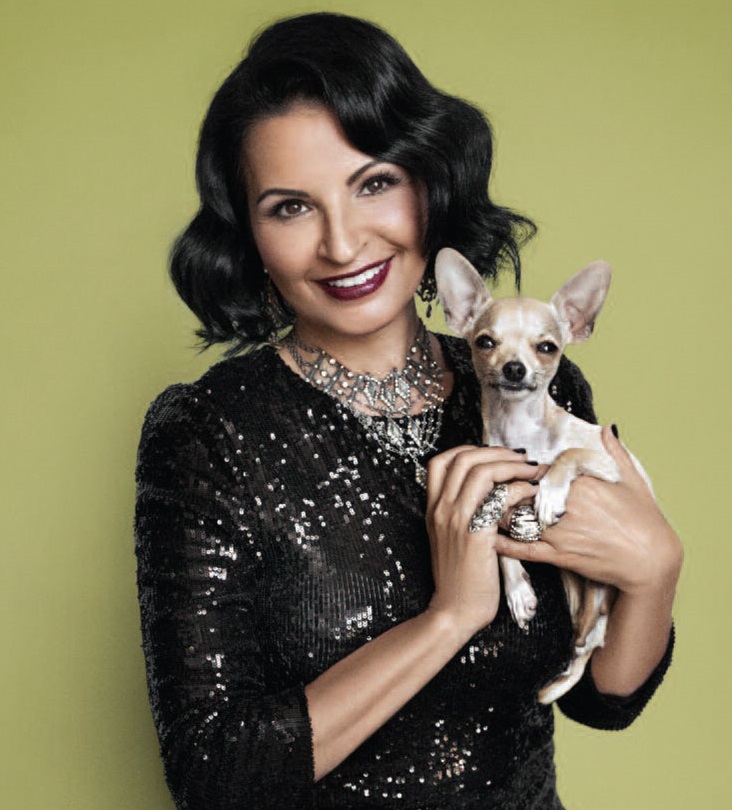 When it comes to sideswiping mob bosses, most people would agree that one degree of separation is a little too close for comfort. For Kathrine Narducci, it’s kind of a sweet spot. She played the torn parent of a young boy being courted by the local crime kingpin in A Bronx Tale (opposite Robert DeNiro), and Charmaine Bucco, the saucy restaurateur in The Sopranos. Narducci sparkled in both devilishly difﬁcult roles. In 2017, she reunited with DeNiro in the HBO ﬁlm The Wizard of Lies, this time portraying Bernie Madoff’s longtime secretary. Once again, Narducci took a complex character and knocked it out of the park. Editor at Large Tracey Smith caught up with “Nardooch” after shooting wrapped to talk about how she found these characters. And how they found her.

EDGE: What do you consider your deﬁning role?

KN: I would say A Bronx Tale because that was the ﬁrst thing I ever did. I have Robert DeNiro to thank for that. He doesn’t even know…well, yes, he does know because every time I see him I tell him! He and his partner, Jane Rosenthal—who have been together since ’93—they’re the reason I am even able to have a career, so I don’t forget that. Your ﬁrst role opposite Robert DeNiro? You couldn’t ask for a better person on this planet. He’s such a kind, understanding, giving human being ﬁrst, and then an actor, and that helps. 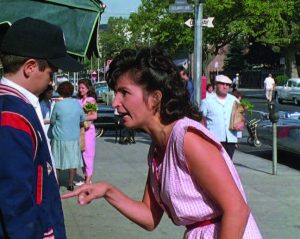 EDGE: How did you land the role of Rosina opposite him?

KN: I took my son, who was seven years old at the time, for the role of the boy, Calogero. When I was there, I realized they had auditions for the mother. I didn’t realize that the mother was actually DeNiro’s wife because they didn’t give me a script. They just gave me sides. The kid’s open call was like a cattle call and my son was the last little boy to go in. When he was done, I was waiting outside in the waiting room. I was a “closet case” actress [laughs]. I didn’t tell anybody I was trying to do things like go on auditions, and my family didn’t know. When I took my son there I thought, Wow, I could meet Robert DeNiro at this audition if I get my son here on this open call. Well, while I was sitting there, women started coming in like around my age, that looked like me, that walked like me, that talked like me, and I asked the casting director when my son came out, “Why are they still here?” She said, “Oh, they’re here for the wife but that’s not an open call—you need to be a SAG actress, are you SAG?”  I said, “No.” Then she said, “Well…if we don’t ﬁnd who we’re looking for today, Bob wants to make the wife an open call tomorrow.” She told me to then give her a call in the morning and she would let me know.

KN: No, I didn’t know Bob was Robert DeNiro [laughs]. So I started getting ready for work for the next morning, and then decided to not go to work, and to call that woman to see if I could go in for the movie.  I called her and she said, “Yeah we’re here. C’mon over!” They put me on tape, sent it to Robert DeNiro, and the next morning I got up to go to work again when I got a call and they said, “Bob saw your tape and he’d like to meet you down in Tribeca and wants you to do a call back.” I went down to Tribeca where I met Bob and Chazz Palminteri, and Bob said, “There’s a slight chance we’ll call you back.”  When I got home, on my answering machine that night, I was invited back! I went back a thousand times and then ﬁnally screen tested, which led to me getting the role. It really was an incredibly long, hard process because he kept making me come back and come back.

EDGE: That must have been nerve-wracking.

KN: When I ﬁnally got the role and I showed up at work the ﬁrst day on set, he goes, “You know, you need to know you beat twenty-ﬁve hundred girls.” I wasn’t nervous until that point!

EDGE: DeNiro has said he believes that, when it’s your time and your role, there’s nothing to keep you from getting it.

KN: I believe that is very true. When it is your time, nothing can keep you from getting the roles you want. Bob was fantastic! It was a great learning experience for me, unbelievable. Everything else pales in comparison to that experience. So then I started getting really good stuff. It’s funny, right after that I got my second role. It was a small one, a cameo role in the remake of Miracle on 34th Street opposite Sir Richard Attenborough, a wonderful British actor and also an amazing director. I couldn’t even believe it, oh my God!  Then from there it was getting an agent, getting in a class and learning my craft. 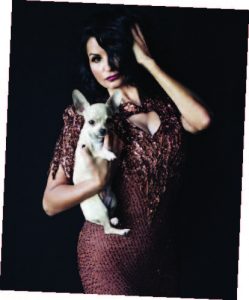 EDGE: When you played Rosina in A Bronx Tale, how much did Chazz want you to be like his mother and how much did he trust you to develop the character?

KN: Chazz and Bob said whatever you brought into the room is exactly who she is, so just do whatever comes organically—you were right in the room. Just do what you were doing and do what your instincts tell you because it’s on the money.  They didn’t want me to change anything. Chazz said to me, “Don’t worry. You have the essence of that, and don’t get in your head about it.” So that’s what I did and I went with my instincts.

EDGE: Were they a good team?

KN: Chazz trusted DeNiro fully because he directed it and he was in it. That was his directing debut, you know.

EDGE: Your iconic role of Charmaine Bucco in The Sopranos came a few years later.

KN: In 1999, I got a call from Cathy Moriarty, who had also played DeNiro’s wife, in Raging Bull. She gave me the nickname 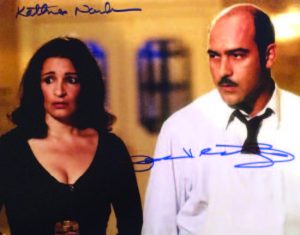 “Nardooch,” which everybody calls me.Cathy said, “Nardooch! You gotta go in for this role. This show is called The Sopranos.” And I was like, “I don’t sing!” [laughs] I called up my agent and he got me the audition. I auditioned for David Chase and then I got the role of Charmaine, which I played from the ’99 pilot until 2007, which was beautiful. It was an actor’s dream to just have a continuous paycheck and to be able to make it as an actor.

EDGE: Why did Charmaine dislike Tony and Carmela so much? They had “invested” in Artie’s restaurant?

KN: She was deﬁnitely the strong voice of reason on that show. She’s the only one that never really ﬂipped and could never be allured by that life. I had a scene with Edie Falco when I tell her I slept with Tony the summer she went away. I tell her in that scene, “I slept with Tony, Carmella, and to be honest with you, it wasn’t for me.”  I leave her standing there shocked! I wondered as an actor why Charmaine had this vendetta against Tony. In my mind, I felt that summer that I slept with him that he actually didn’t call me back, and that’s why I say to Carmela, “I coulda had him but I didn’t want him.” That would actually be a lie. I couldn’t have had him because he never called me back. It was a summer ﬂing to him, and I think Charmaine held onto that—which was my ammunition. I had no backstory of why I would be against this man and I just felt it had to go this deep. It had to do with sex and love, because those are the things that women hold onto.

EDGE: You played another Italian character in The Wizard of Lies, which aired on HBO in May.

KN: I play an Italian but she’s not a “Mom Italian.” I’m opposite DeNiro again in the role of Eleanor Squillari, who was Bernie Madoff’s secretary for twenty-ﬁve years.  She was not just his gatekeeper, she was a very dedicated, hard worker. The devotion Eleanor had for Bernie was unbelievable. Her ofﬁce was right out in front of Bernie’s and you had to get past her to get to Bernie. After Bernie was arrested, people started calling the ofﬁce, cursing Eleanor out and asking where their money was. She realized that she handled all his business and that she’s in deep you-know-what. Everyone thinks I’m part of it. How could I not know he stole 365 billion dollars?

EDGE: How was it working with the director, Barry Levinson?

KN: Oh, my God, what an amazing director. The only note he gave me at the beginning of the table read, he told us all to not impersonate.

EDGE: Was that character fun to play?

KN: Yes, because she was real. She was Bernie Madoff’s right-hand man. She was solid. And that is a big part of who I am. I’m very loyal to my real friends. I’m very devoted to my job.

EDGE: Of the other characters you’ve played, who else reﬂected aspects of who you are?

KN: As far as A Bronx Tale, I had a son that age and I was a mom who is nurturing a kid, which was a part of me. And like Charmaine Bucco, as I said, I’m a very loyal person. I am also a very good cook. And she ran that restaurant with an iron ﬁst. I’m good at what I do and I live and breathe my career and I love it so much. And so did Charmaine. She didn’t take any crap. Nor do I!

Editor’s Note: Kathrine Narducci is an ardent supporter of Fashion Tails. Fashion Tails is an initiative started to educate the public about the plight of homeless animals through the use of high fashion photography with celebrities.