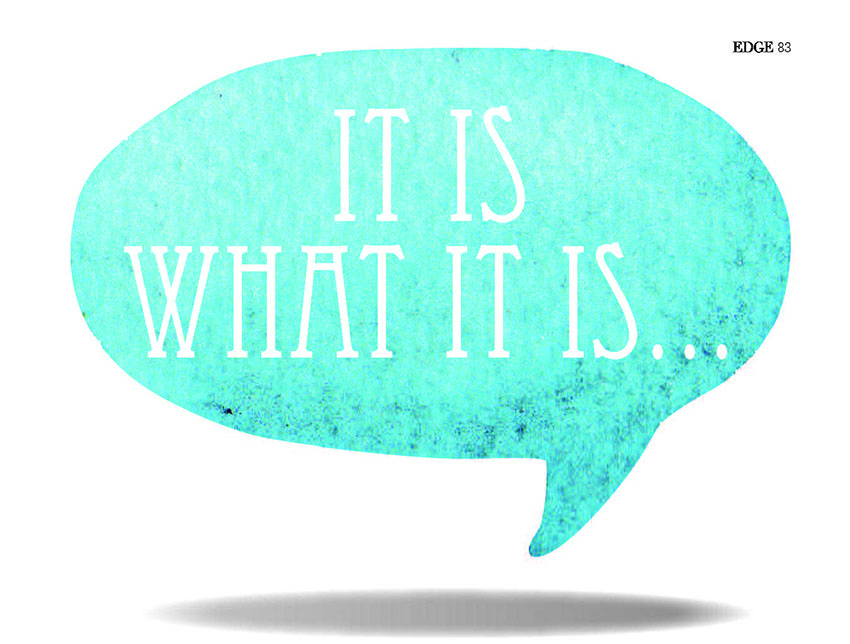 …and 21 other expressions that drive me crazy.

I have issues with I have issues. In my career as a writer and editor, I ﬁnd myself sideswiping people in the ﬁnancial, legal, medical, tech, sports, publishing and public relations industries who subject me to what I consider to be an inordinate number of expressions that either don’t say what they mean, don’t mean what they say, are utterly redundant or are subject to serial misuse.

I’m not talking about industry-speciﬁc jargon; that at least has a cultural component. The words and phrases that burrow under my skin are ones we all employ on a regular basis without even listening to the jibberish spilling out of our mouths. Perhaps the most annoying aspect of these overwrought expressions is that I catch myself using them all the time. Like the rest of the world, I have my lazy, semiliterate moments—even though I am paid not to.

So here are my Top 20. How many do you hear in a given day? Be honest…how many are you guilty of using?

This is often the one-word response to something that requires nothing more than the word Yes or even a simple head-nod. I’ve noticed that a lot of service people have started using the word. “May I have some water when you come back to the table?” Absolutely. It’s become a kissing cousin to the word Obviously, which people use when something is not at all obvious.

At the end of the day…

I don’t know about you, but the end of my day rarely brings resolution to anything other than being awake. I wonder, do people who work the night shift ever say At the end of the day…? If so, wake me up so I can slap them. Actually, this expression has some history behind it: In the early 1800s, when the day ended, there was only (poorly lit) night, so everyone had to stop whatever they were doing until it was light again.

At this point in time…

Just to be clear, this is really code for Until I tell you otherwise, because it covers way more time than a single point in time.

Everything happens for a reason.

Well, technically this is true. My issue with the phrase is that, while brilliant minds like Einstein and Hawking spend their lives trying to express this concept in mathematical terms, the rest of us dullards use this old saying when we have no clue what the reason for something is.

If I would have…

This is a tense with which I am unfamiliar. It’s like a mad twisting of the subjunctive. In truth, it’s not a tense at all. The correct construction is either Had I… or If I had…

I have to say…

I have issues with…

Wait. Did you just say something you didn’t mean?

I’m not comfortable with…

Your comfort is not my concern, so ﬁnd another way of saying I disagree or That’s a bad idea.

It is what it is…

Annoying because it relieves the utterer of any responsibility for analyzing or responding meaningfully to a situation. Doubly annoying because often it is not what it is, but something entirely different.

Rarely, if ever, is it all good.

So are you saying this is a good idea or a stupid one? Or that it’d be stupid not to think it’s a good idea? Or that giving it more thought would require no brain? Now my head hurts.

I’m sorry. Are you Australian? I didn’t think so. For future reference, It’s okay or Don’t worry will do just ﬁne.

The more I think about this adjective, the more it annoys and confuses me. First of all, it should be hyphenated, yet never is. Second of all, its meaning is different when a young person uses it and an old person uses it. Third of all, let’s face it, young people have almost no concept of what old people were doing when they were young. And fourth of all, if you took courses at the New School in New York City back in the 1980s, is everything you learned now considered Old School?

C’mon, is this any way to start a sentence? I assume whatever observation or opinion you are about to offer is personal, because you are saying it.

Thankfully, people don’t use this much when they’re being serious because, seriously, does anyone really understand what it means?

I am guilty of using this phrase in the manipulative way it was intended, as a means of saying to someone In case you were thinking of not doing this annoying thing I want you to do, forget it—you now have no choice because I’ve already thanked you. It’s like warning someone not to go back on a promise they haven’t even made yet.

This is a very “versatile” response. It can mean Wow, I never thought of that and I probably should have or That question was idiotic, but you’re my boss or client and I’d rather not be ﬁred today. Often, it is a way of drawing someone timid into a group conversation, which I guess is a fairly benign use of the phrase. Ironically, there is one time when you almost never hear people say, “That’s a great question”—when someone actually asks a great question.

Hold on a second. At what point were you not being honest? When I hear someone say this, I instantly assume that some part of what they are about to say might be a lie.

Technically true, but that’s no reason to give up on something you might still be able to change or ﬁx.

With all due respect…

There are certain people who’ll begin a sentence with With all due respect… and you just know that what’s coming next is going to be the most disrespectful thing you have heard all day. Admit it, you know at least one person like this.

Short for You only live once. I don’t hang out with people who actually use this word, but it irritates me just to know that these people exist. I wonder if Hindus ever say YOLO…because I’d have an issue with that.

Editor’s Note: In case you were wondering, the author’s #23 most annoying expression was My bad. Visit the EDGE Facebook page to add your pet peeves to the list—including Pet peeve (which came in at #32).