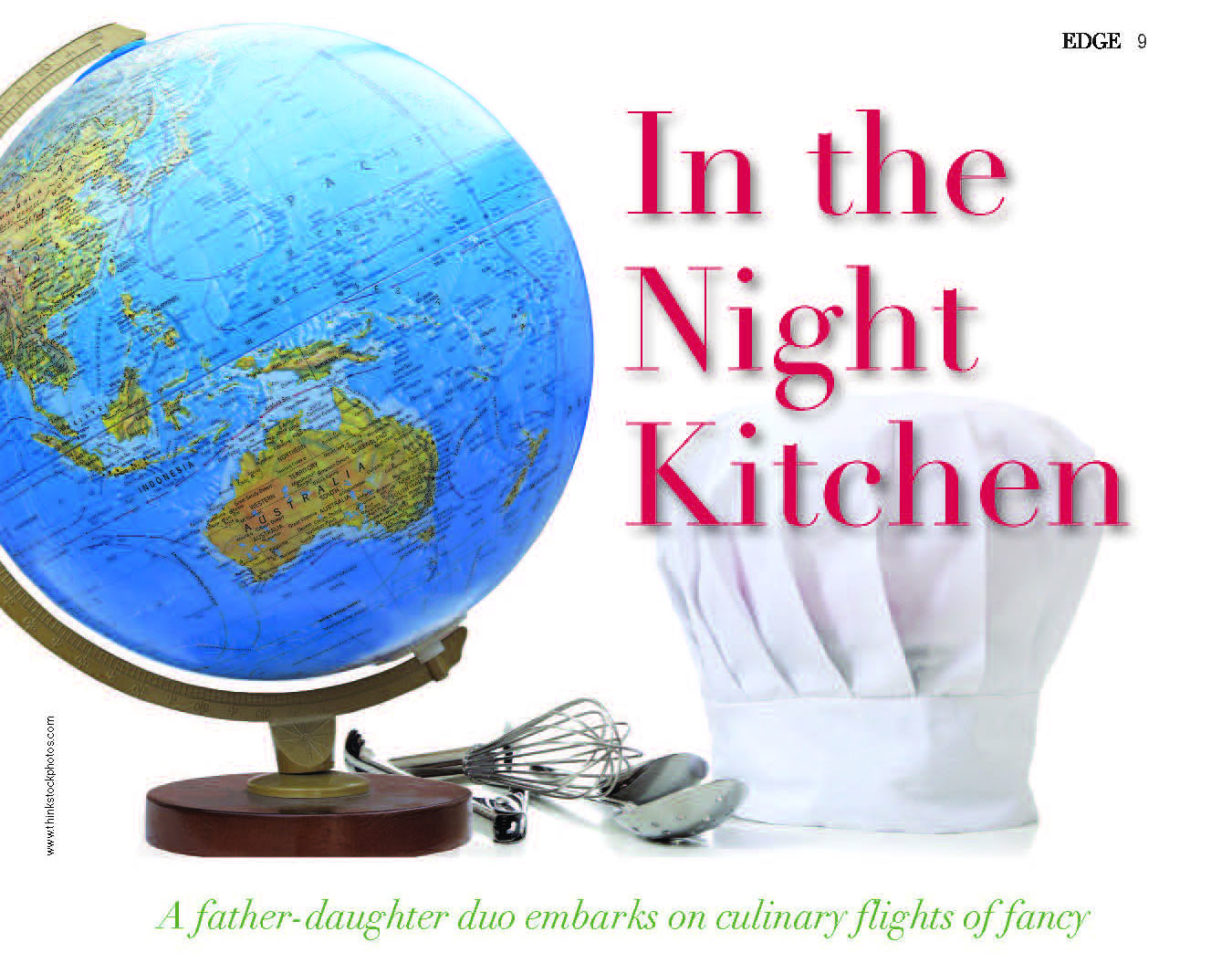 In The Night Kitchen -

A father-daughter duo embarks on culinary flights of fancy

In March 2009, when Talia Kurlansky was 9, her father Mark spun a big globe with an airplane as its base that sat on a desk in their Manhattan apartment…and let his daughter’s finger fall where it may. That fateful fall of the finger dictated what was to become a family ritual: a dinner menu culled from the cuisine of a foreign land. Fifty-two menus later, the fruits of the family’s ritual have become a joint father-daughter book, International Night (Bloomsbury; $29), a globetrotting adventure in food, history and culture.

Mark Kurlansky is one of the most respected and decorated writers in America, author of The New York Times best-sellers that include Cod, Salt, The Big Oyster, The Basque History of the World and 1968—as well as a host of adult ﬁction and children’s books. Talia, now 14 and a freshman at The Calhoun School in New York, may not (yet) have her father’s catalog of books, but in her debut with International Night, she explains in a voice both sure and entertaining how to separate an egg, why spaghetti Bolognese is her favorite dish, who grills the best sardines and 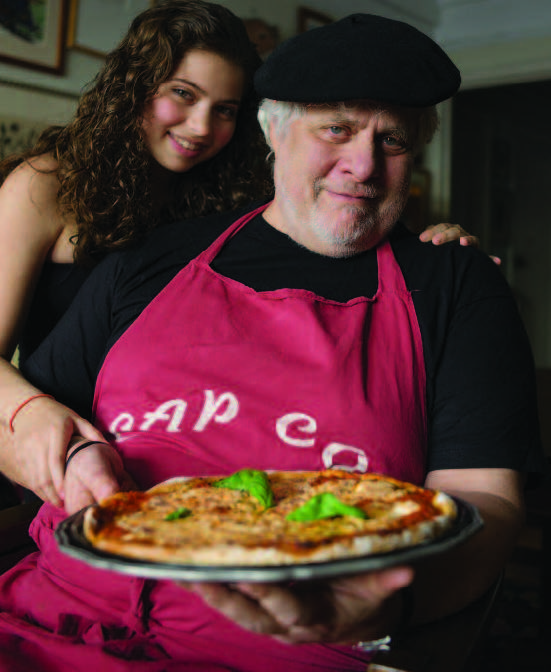 what steps are necessary to achieve a perfect pizza made from homemade dough tossed, softly and gently, in the air (“Try not to let the dough land on the dog, or in a potted plant. But the dog usually loves it”).

International Night is a book that schools would be wise to include in their curriculum, and parents in their home library. The Kurlanskys’ experiences—both in the cooking (“I tried dishes we don’t normally make in our house,” says Talia; “Some recipes in this book are ones I’ve made for years, but have refused to share until now,” adds Mark) and the off-the-beaten path traveling—are primers in how to learn.

“I’d been to 41 of the places in the menus,” Mark says of the bills of fare that range from Andalusia, Algeria, Aquitaine and Argentina to Quebec, Sri Lanka, Tanzania and Turkey. “That left 11 where I’d never been.”

All international dinner nights involved homework. Mark and Talia researched culture, customs and cuisines, and made sure music was part of the evening’s festivities. Talia added another component: costumes.

“I’d learn what traditional dress and what the outﬁts were like, and I’d use things from our home to come up with a costume I’d wear for International Night,” she says.

“Kids contribute a lot of ideas through the questions they ask,” Mark notes.

“I got a great sense of the timeline of history and a realistic sense of place,” Talia adds. Her mother Marian took hints of history and culture to guess which country her family was traveling to via the edible route.

Sometimes, when Talia’s ﬁnger landed on a destination, the end result was a trip. As Mark writes in their book, “When I learned that for the ﬁrst time in history there was a cooking school in Morocco, I decided that Talia and I had to go.” They studied with dadas, women trained by their mothers in the crafts, secrets and recipes of Moroccan cookery. They cooked with their dadas several hours a day, taking in the sights and curiosities of this North African country in their non-kitchen time.

“While on this trip, I went up a level in my cooking,” Talia writes. When it came time to write a menu, “we realized that we had too many dishes [for just one dinner], so we had two Morocco Nights.”

Morocco may have served forth a bounty for the Kurlanskys, but every aspect of the project brought insight and new skills to the father-daughter team. Talia talks of using the back side of a ladle to spread crepe batter around a pan: “Move the ladle in a circular motion and that spreads the batter evenly.”

Mark, whose expansive knowledge of all things culinary has brought him honors from the James Beard Foundation, Bon Appetit magazine, the National Council of Teachers of English and National Parenting Publications, still marvels at the “universality of salt,” and points out that “peppers are different everywhere (because), like wine, they taste differently everywhere they are grown,” and offers tips on spices such as cardamom: “It gives dishes a magical perfume, but get the green, not the white.” 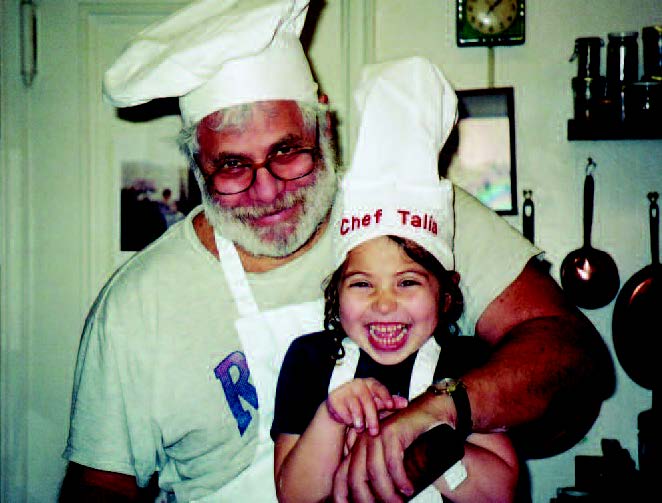 International Night also offers the recipe for Mark’s prize dessert, “Rigo Jancsi” from Hungary, which he spent weeks perfecting during a stint in the 1970s as a chef at a restaurant in Greenwich Village. The cake was easy, the chocolate topping not all that hard to learn, but “I worked on the ﬁlling for weeks, trying, throwing it out, trying again.”

Finally, Mark got it.

As Talia says, “A lot of people making dessert don’t understand the chemistry. They don’t use a recipe.”

But with most of the savory recipes in International Night, the Kurlanskys agree the instructions should be “suggestions.” Home cooks should let inspiration ﬂow.

Mark, who currently is writing a book about the impact of paper on civilization and whose Twitter handle is @codlansky, wishes Talia’s ﬁnger had landed on Scotland, since he spent time there ﬂy-ﬁshing and had many tales to tell—and India, a huge country he’s yet to explore.

What? Never been to the land virtually ruled by his beloved spices?

“No,” Mark says, his voice expressing regret. “I’ve never been to India. We need to correct that.” 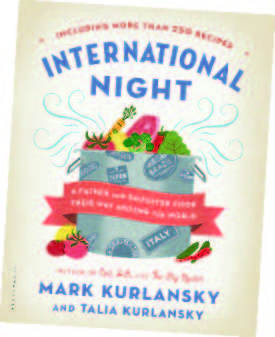 Add the water. Cook over medium heat for one hour.

Meanwhile, take the tomatoes, blacken the skin over a burner, and rub it off. Quarter the tomatoes and remove the seed and gel. Save yourself a lot of chopping by pureeing the tomatoes in a food processor with the ginger root.

Mix in a bowl with the tomato paste, remaining 3 tablespoons olive oil and the black pepper. Add this mixture to the soup pot. Stir well and cook another 20 minutes. Add the rice. Cook 10 minutes more.

Take some liquid from the soup and mix it in a bowl with the ﬂour until it is smooth and without lumps. Stir it back into the soup. Stir constantly while cooking soup for another 5 minutes. Serves 3.